Does it deserve the #LimitlessGamingMonster moniker? 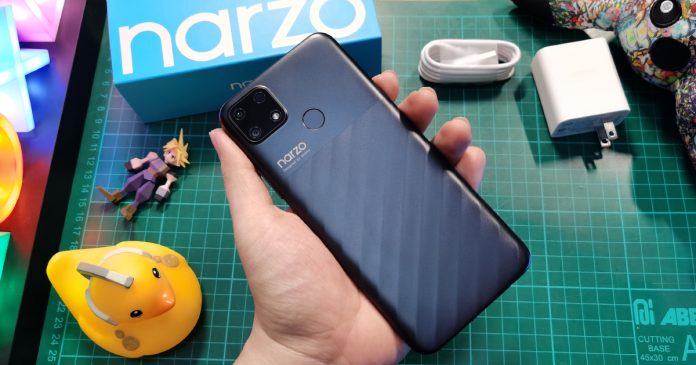 Not stepping on the brakes just yet, realme is trying to diversify their portfolio with the push of the narzo line, a new gaming line for those who are looking for excellent bang-for-buck smartphone devices to complement their casual mobile gaming lifestyle.

After launching the narzo 20 late last year, realme is updating the narzo product line with the introduction of the narzo 30A, a much more streamlined device that focuses on what value hunting mobile gamers need – large screen, large battery and internals that will be able to handle today’s most played mobile games. 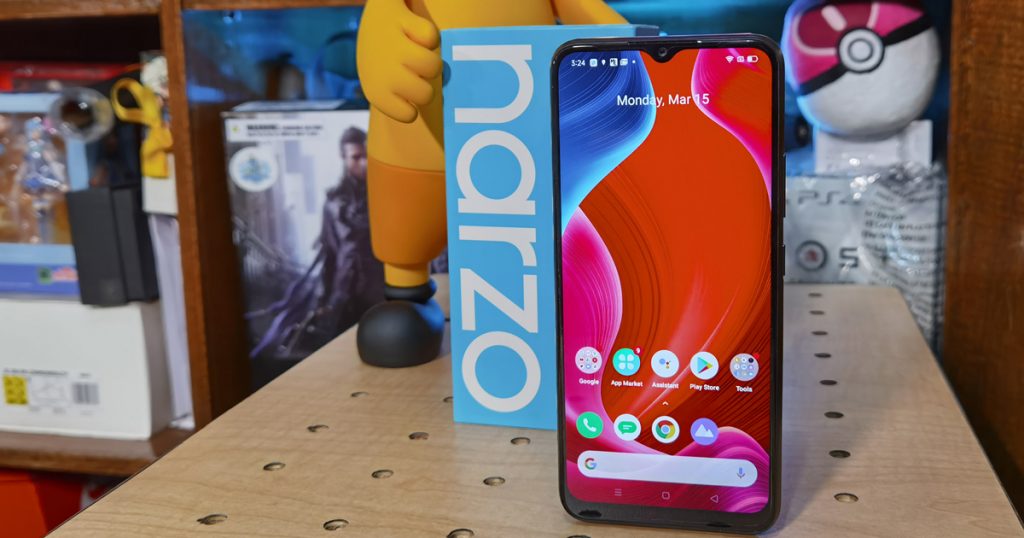 So, after fiddling with the unit for about 2 weeks now, is the narzo 30A the #LimitlessGamingMonster that realme is claiming? Here’s our full review of their latest smartphone.

But before we delve deeper into that, we’d like to point out the price point of the realme narzo 30A because everything we’ll say is relative to this. The official retail price of this pretty amazing smartphone is PHP 6,490 and this, in our opinion, is one of the best sub-6500 phones to date.

realme tried to make a clear distinction between their main line and the narzo sub-brand. Instead of packing the phone in the traditional realme yellow box, they opted for a cool blue one for the narzo 30A. This is also going to be the sub-brand’s official color moving forward. 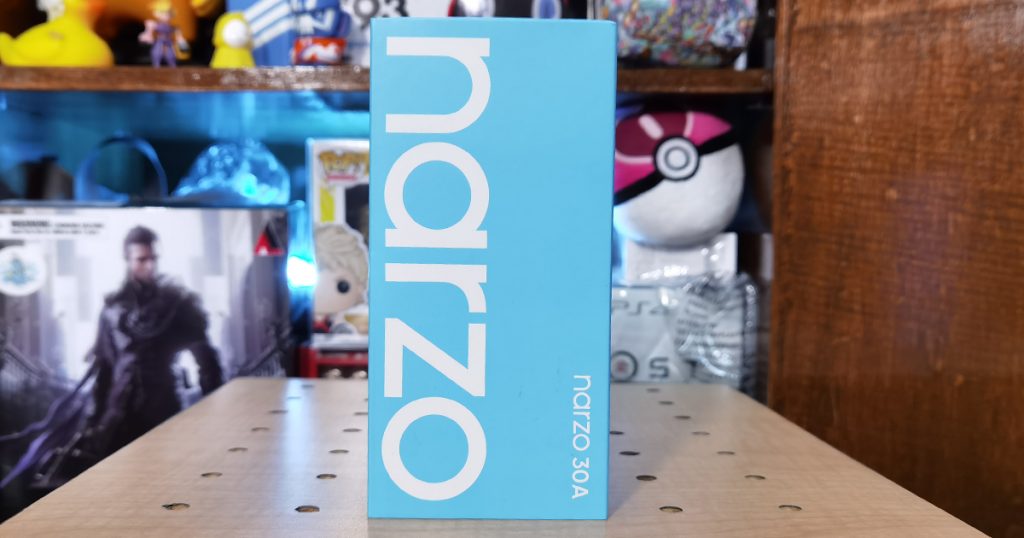 The design on the realme narzo 30A’s rear cover also speaks to the type of market the sub-brand wants to cater to. The slightly polished industrial look with its diagonal striped 3D box print gives us a subtle Off-White-ish sort of vibe. 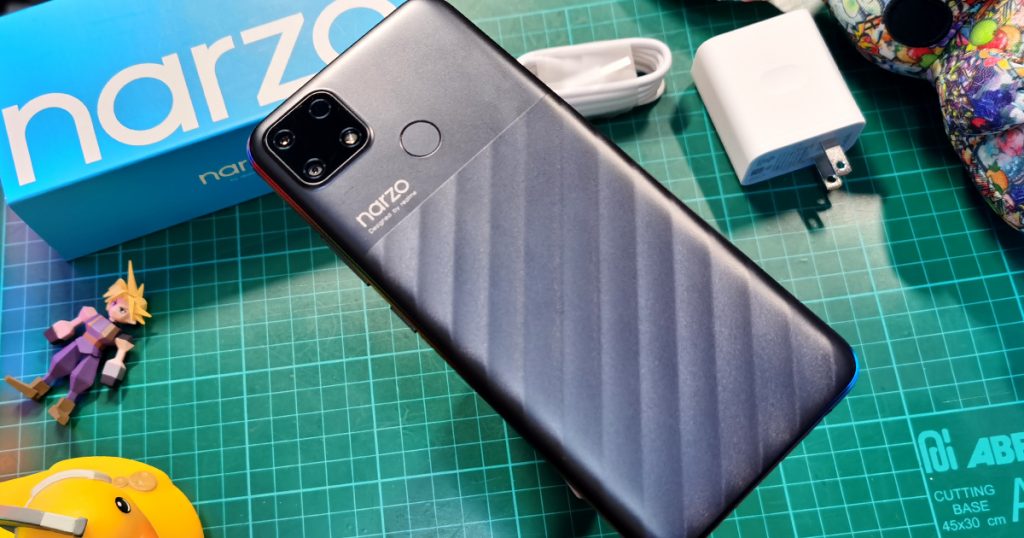 According to the folks at realme, the design inspiration is of the narzo line is to create smartphones that veer away from just the basic smartphone design without being overtly showy. Hence the subtle graphic patterns on both the narzo 20 and the narzo 30A.

While the rear cover of the realme narzo 30A is rendered in polycarbonate, the two-tone texture, gorgeous paint finishing, and delicate design choices elevates the phone from the realm of other entry-level smartphones offering. 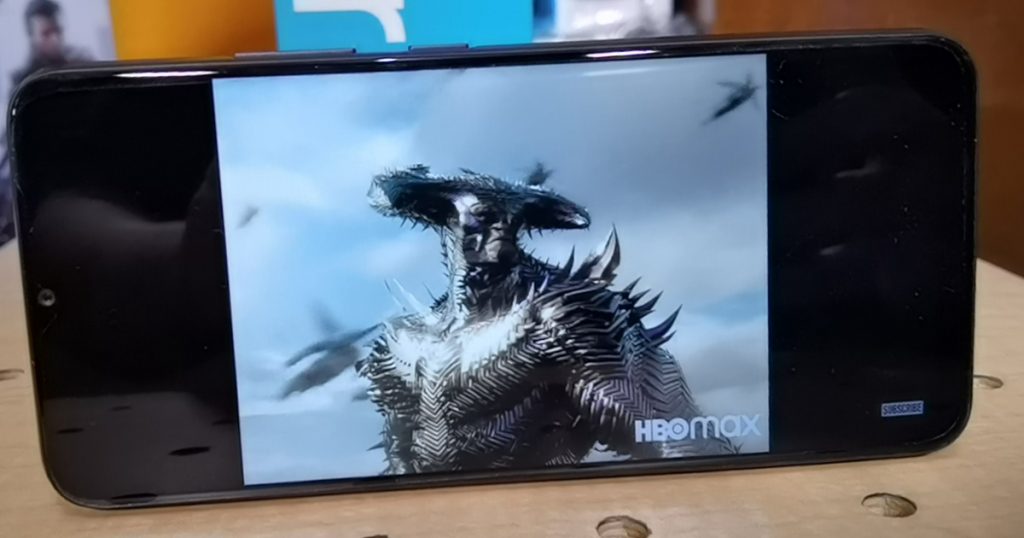 The realme narzo 30A has a 6.5-inch IPS LCD screen that only has an HD resolution (1600 x720). However, even with just an HD resolution, videos are relatively enjoyable. Because of it’s large 6.5-inch display with a small mini drop notch, we get a bigger screen real estate. Couple this with exceptionally strong speakers, and you have a winning combo. 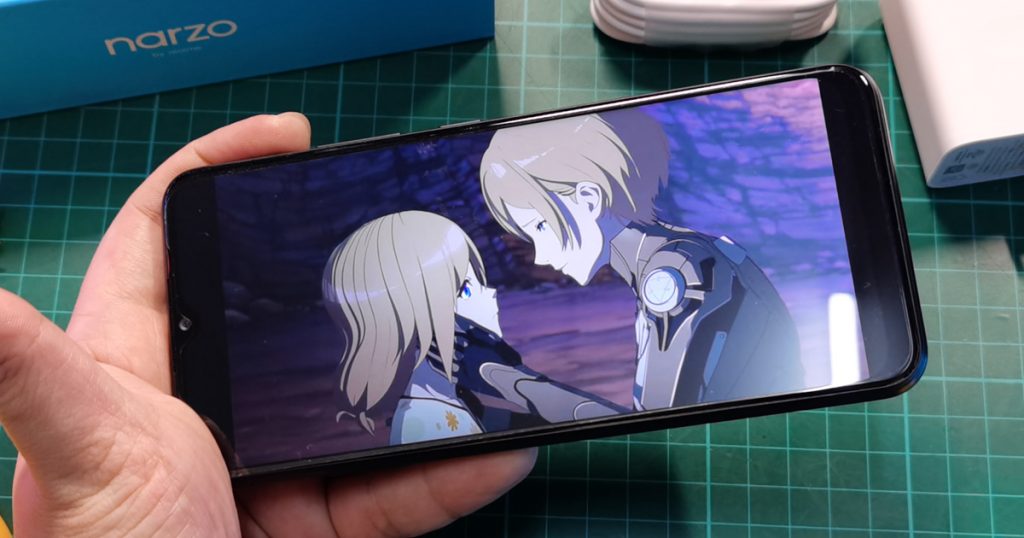 The only complaint would be the screen brightness. Even when you punch the brightness to max, it still seems a bit dim. In fact, if you ever use your phone outdoors and under bright sunlight, you may have a hard time looking at your screen. I tried taking photos outdoor under the sun and I can barely see anything on the realme narzo 30A’s screen. That being said, if you find ample shade when you’re outdoors or ample lighting when you’re indoors, then you shouldn’t encounter many problems. 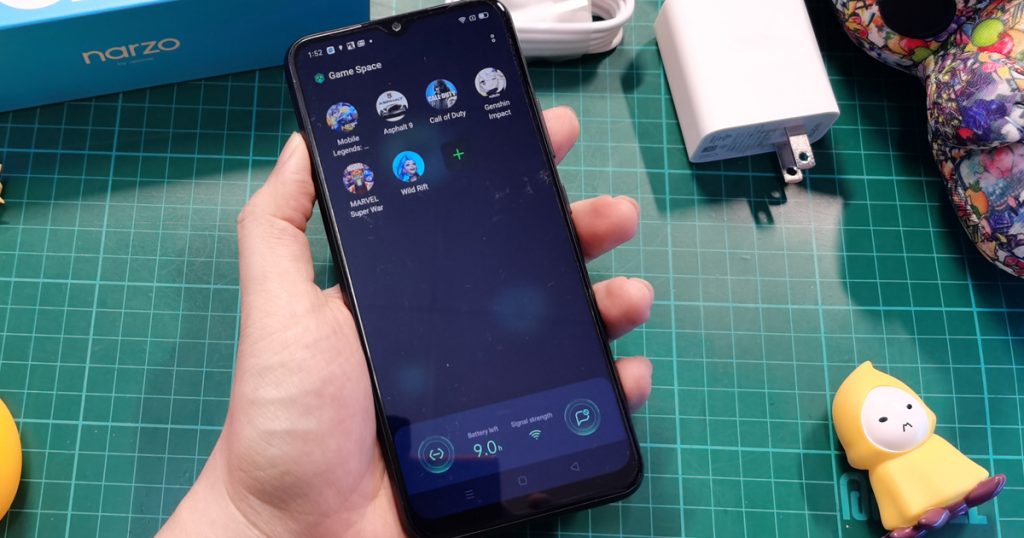 The realme narzo 30A, as with the other phones in the narzo line, is intended for Mobile Gamers that need to stick to a budget. Utilizing the same chipset that it has on its older brother, the narzo 30A is equipped once more with MediaTek’s Helio G85 processor and 4GB of RAM. With this, the smartphone also equipped with 64GB of Internal memory with a dedicated slot for expansion of up to 256GB.

We’ve already seen what the MediaTek Helio G85 can do and given this configuration, we’re fairly confident that it can run most games with relative ease. 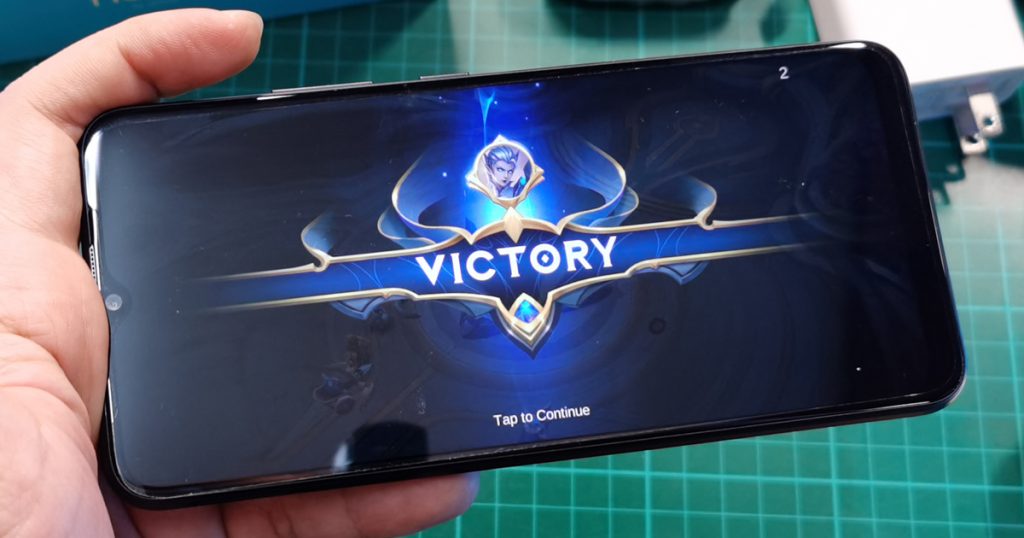 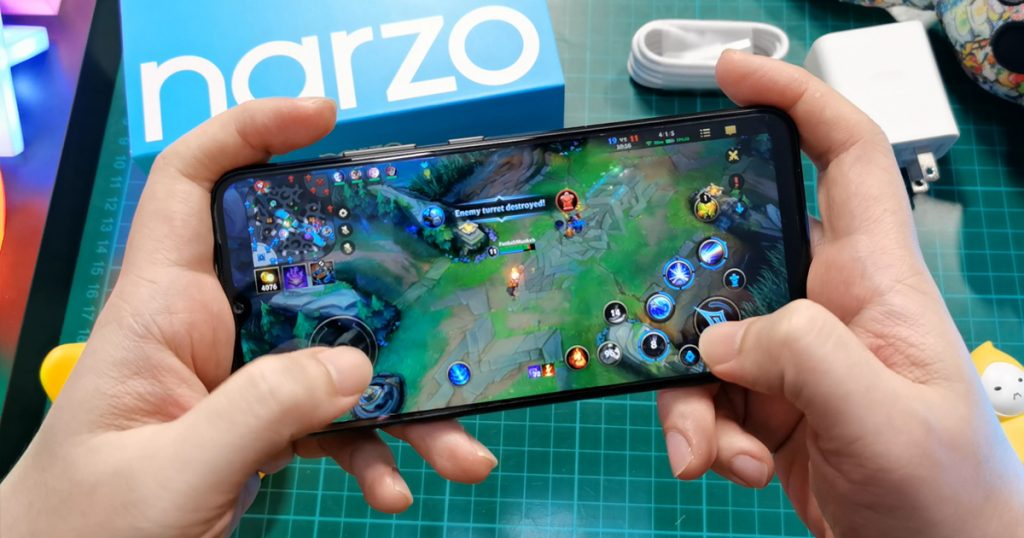 For the today’s most popular MOBAs, the realme narzo 30A can handle these games with relative ease. In fact, Mobile Legends, and League of Legends: Wild Rift were running at High to Ultra-High settings without dropping any framerates. Call of Duty Mobile runs spectacularly smooth as well. 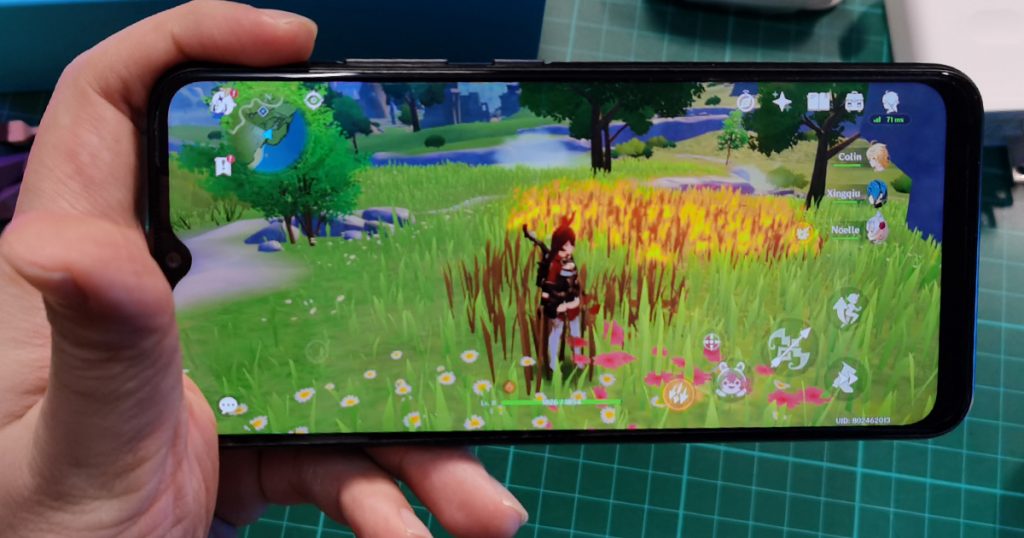 The only game that will require you to clock everything at its lowest is Genshin Impact – and even then you’ll feel a couple of framerate drops here and there still. That being said, Genshin is one of the more demanding games in the market right now, and the fact that the realme narzo 30A can even boot the game up is testament of how much focus realme has when crafting their smartphones even with their entry-level offering. 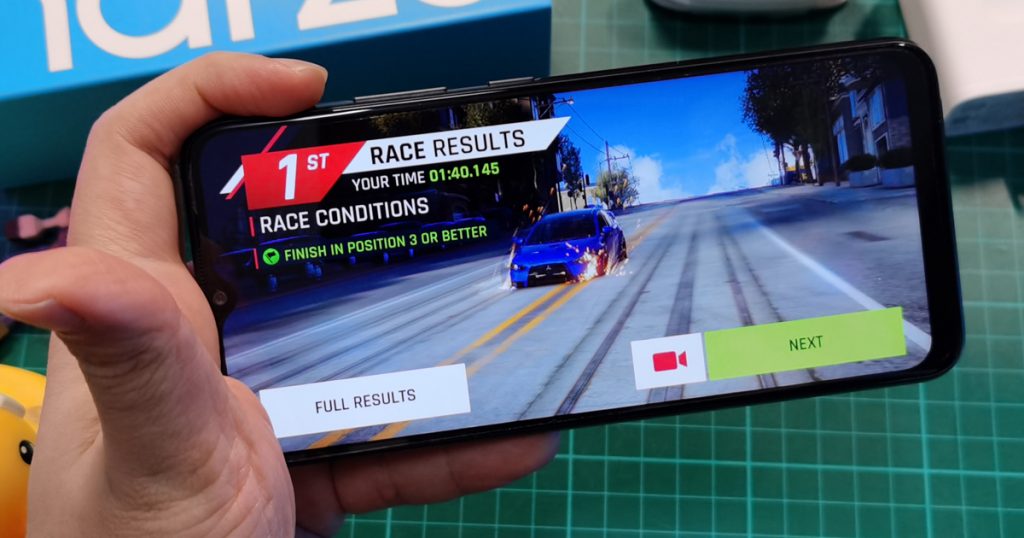 And for the absolutely competitive price point that the narzo line usually has, it’s great to see that the unit performs pretty good with majority of today’s most popular games. 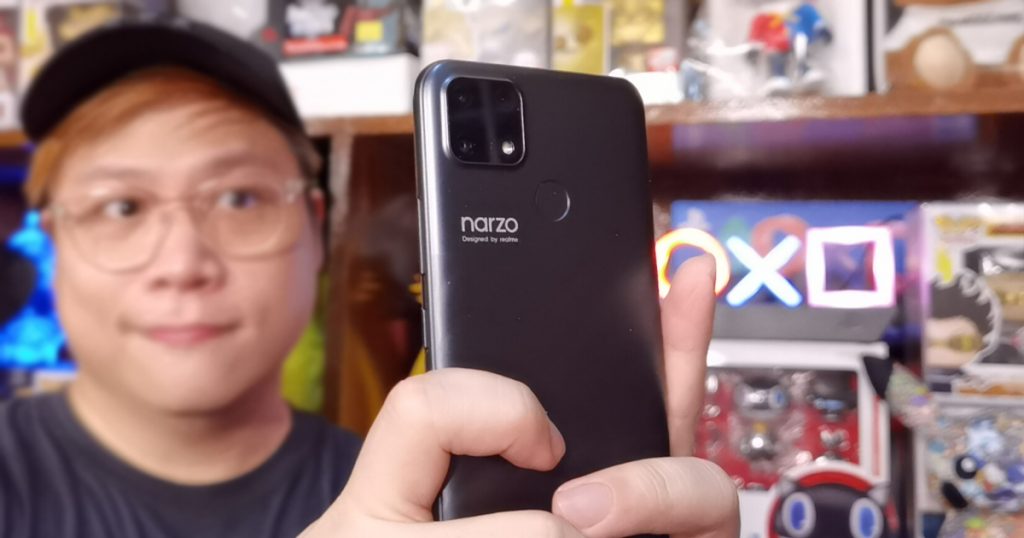 To keep the price point below of that of the realme narzo 20, realme had to remove a couple of things from its older brother like swapping the camera module from 3-lenses to 2-lenses. The thinking behind this can be attributed to having a system that appeals more to core gamers than have an all-rounder smartphone. While still retaining basic optics like its 13MP wide and 2MP black and white lenses for the phone’s rear camera and an 8MP selfie camera, the realme narzo 30A basically can handle a lot of the basic photo requirements as long as you have ample lighting.

The phone does struggle at night even with Night Mode on. 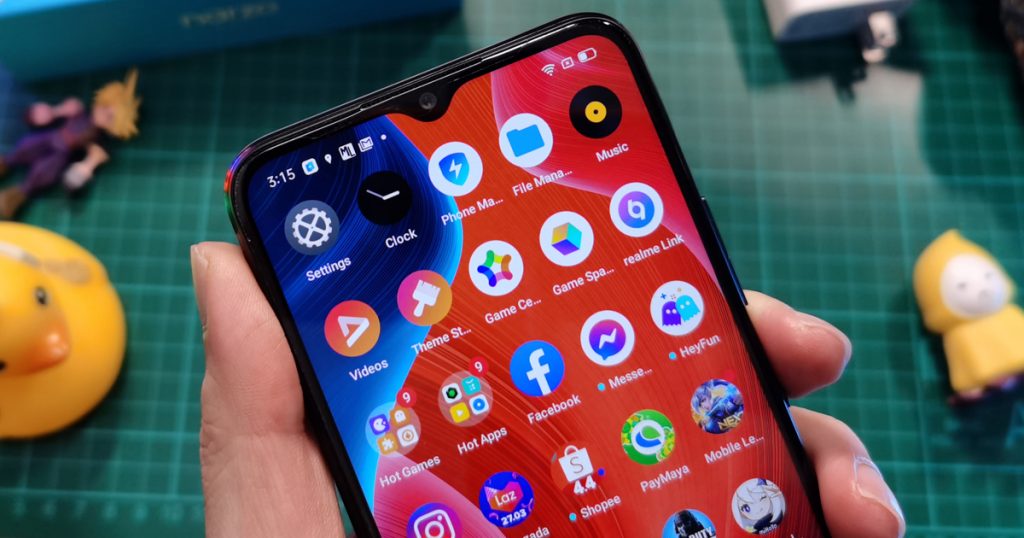 The realme narzo 30A has one of the biggest batteries we’ve seen on a smartphone. Equipping it with 6000mah battery and an 18W super-fast charger, you can be sure that the phone can last the entire day with you (or more). On gaming, we were able to get about 4 games of Mobile Legends, 4 games of Lol Wild Rift and about an hour or two of non-stop Genshin Impact until the phone’s battery dipped below 50%. That’s how much juice this unit has.

As for productivity, the realme narzo 30A is currently sporting the realme UI app out of the box running on Android 10. However, according to the guys at realme Philippines, we can expect an upgrade to Android 11 and the UI going up to 2.0 sometime in the 3rd Quarter of this year. 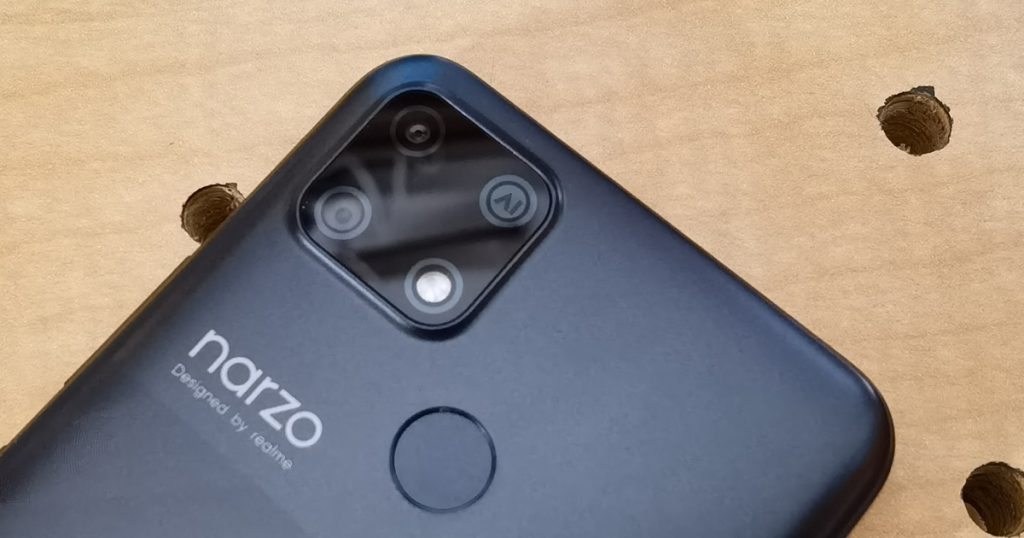 With a price tag of only PHP 6490, realme narzo 30A is a great buy if you’re looking for a no-nonsense smartphone that you can use for everyday gaming. Plus, realme has an enticing promo if you decide to purchase the narzo 30A on day 1 at their official Lazada Flagship Store. They’re slashing off 500 pesos from the original SRP bringing the price down to just PHP 5990 and they’re waiving the shipping fee as well only for March 25 and 27, 2021.

Overall, it feels that the narzo is what realme was supposed to be before they became the powerhouse brand that they are now. It’s an a smart device for those who are a bit more tech-savvy but has a penchant for hunting great bargains.

- Advertisement -
Previous articleSmart teams up with Moonton for Mobile Legends Pro League Season 7
Next articleThe Mitchells Vs. The Machines streams on Netflix April 30