Which phone gives the most bang for your buck? 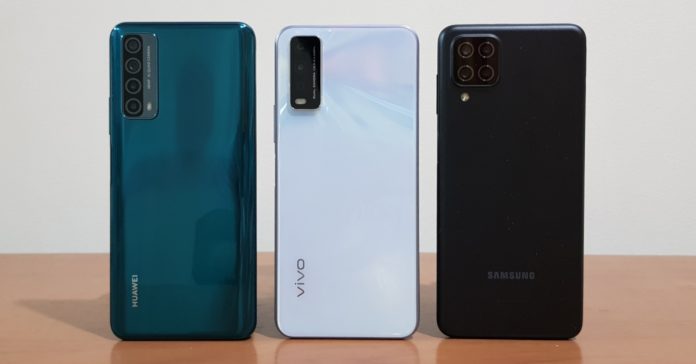 Smartphones are a must-have, especially in today’s digital landscape where working/studying from home is the norm. It’s a good thing then that you don’t have to shell out lots of money for a phone as even today’s budget devices are feature-packed and have great performance. The only problem is, there are so many budget phones to choose from that picking what to buy can be quite a challenge.

If you’re in the market for a new budget phone, whether for yourself or for your kid, we’re here to help! To give you a better idea of what to get, we tested out three popular budget smartphones – the Huawei Y7a, Vivo Y20i, and Samsung Galaxy A12 – to see which one is the best. 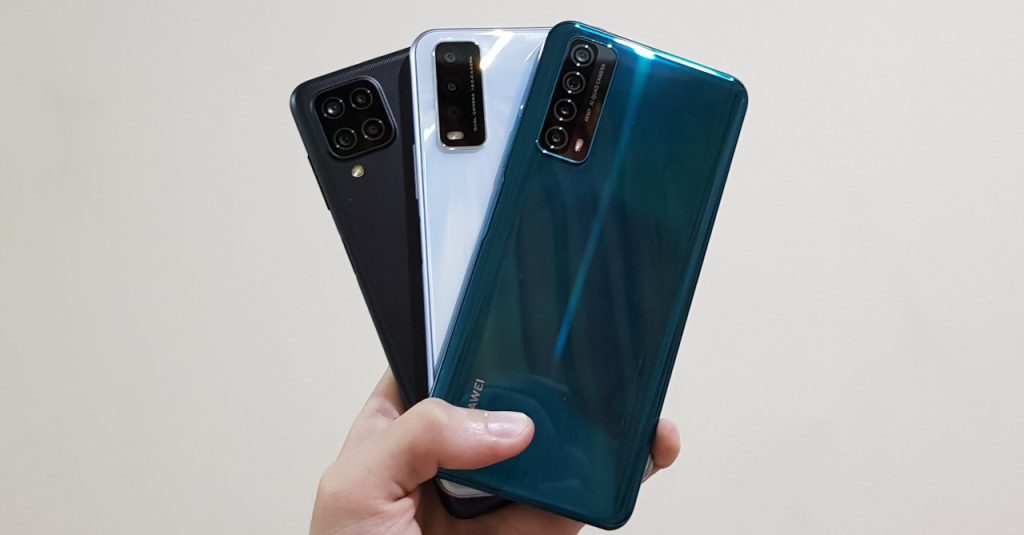 In this showdown, we’re comparing not just the performance of the phones, but also their displays, cameras, and other features. So, without further ado, let’s get started! 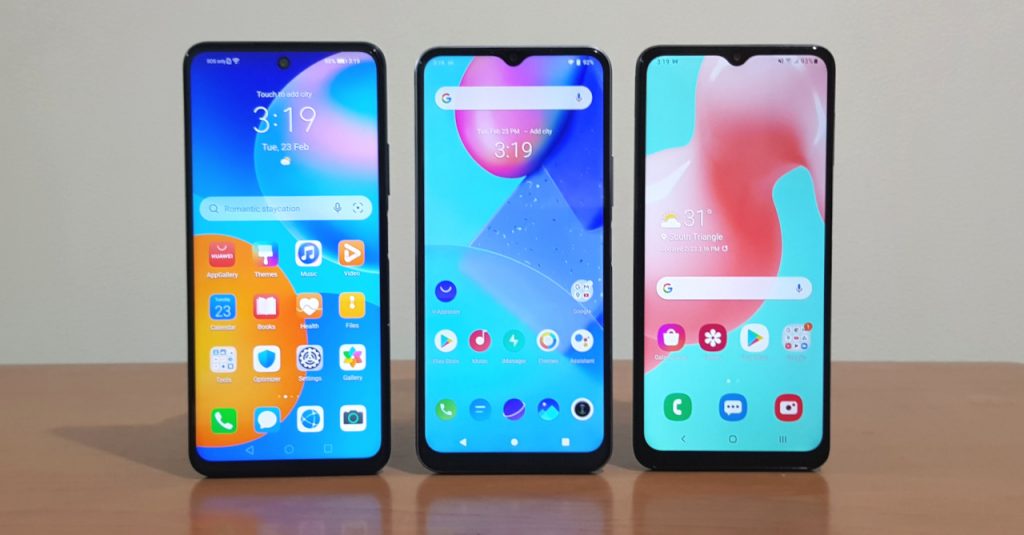 Given the Y7a’s much higher resolution along with the fact that it has the biggest screen size among the three, there’s no question that the Y7a has the best display among the three. Whether you’ll use the phone to binge-watch movies or for work/study, the Y7a should deliver the best viewing experience thanks to its larger size and sharper output.

Based on specs alone, the Y20i has the least flexible rear camera setup as it only has two, not to mention that the main shooter has a lower megapixel count compared to the others. Meanwhile, the Y7a and the A12 are mostly matched, but the Y7as ultrawide camera has a higher megapixel count.

While the Y7a may have the best cameras on paper, does it prove true in actual use? Yes, it does!

Shots on the Y7a’s 48MP main camera have better quality, especially in low light situations as it is the only phone among the three that has a dedicated Night Mode. Ultrawide shots are also noticeably better on the Y7a compared to the A12 (the Y20i has no ultrawide shooter for comparison). Finally, selfies by the Y7a are also sharper and brighter than the ones taken by the Y20i and A12. There’s also the fact that the Y7a has the most feature-rich camera app among the three.

Smartphones are powerful productivity devices, but they’re also great for entertainment. Therefore, we had to test the gaming capabilities of these three budget phones. All three phone have 4GB of RAM, though they are each powered by different processors: Kirin 710A for the Y7a, Snapdragon 460 for the Y20i, and Helio P35 for the A12.

All three phones proved to be capable of running popular games that are less hardware intensive such as Mobile Legends and Free Fire. While Medium is the recommended graphics settings on these phones for Mobile Legends, I was able to play the game on High on all three without any problems. Free Fire also had no problems running. Though for more hardware intensive games, it was a different story.

When playing games that require more horsepower, the Huawei Y7a is the most capable among the three as the Y20i and A12 just aren’t as powerful. To illustrate, here’s a look at some benchmarks: 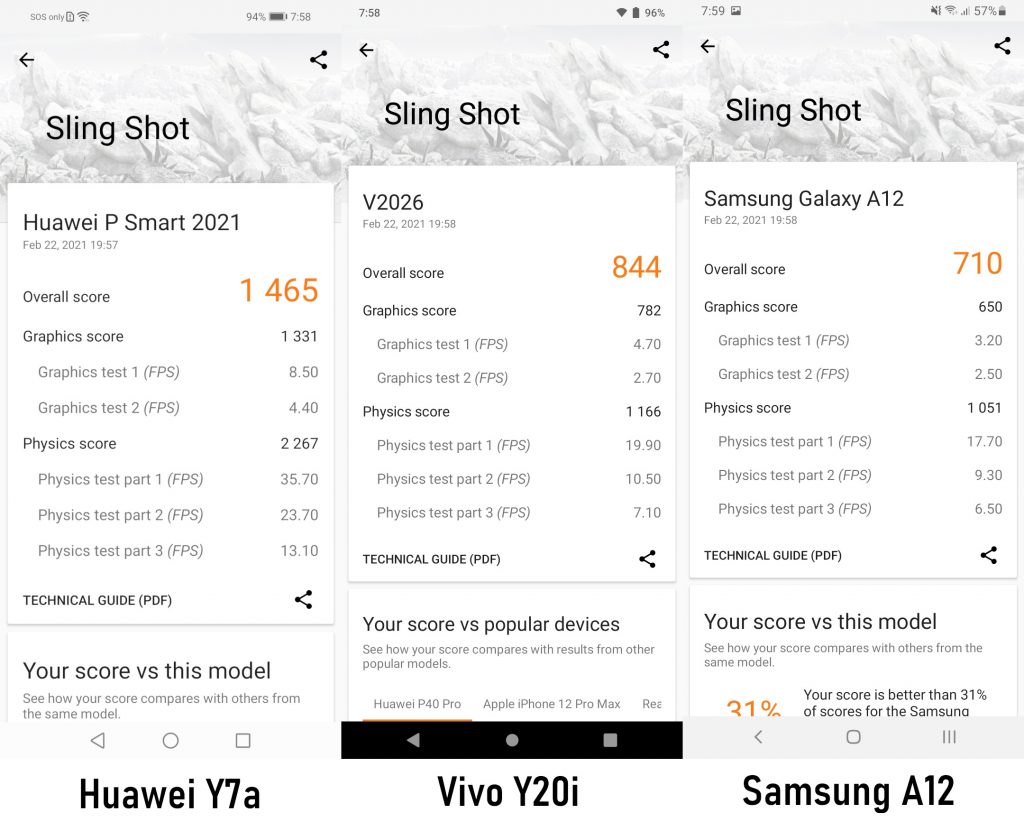 As you can see, the Y7a has the highest score in the 3DMark Sling Shot benchmark, a test that measures a phone’s gaming performance. 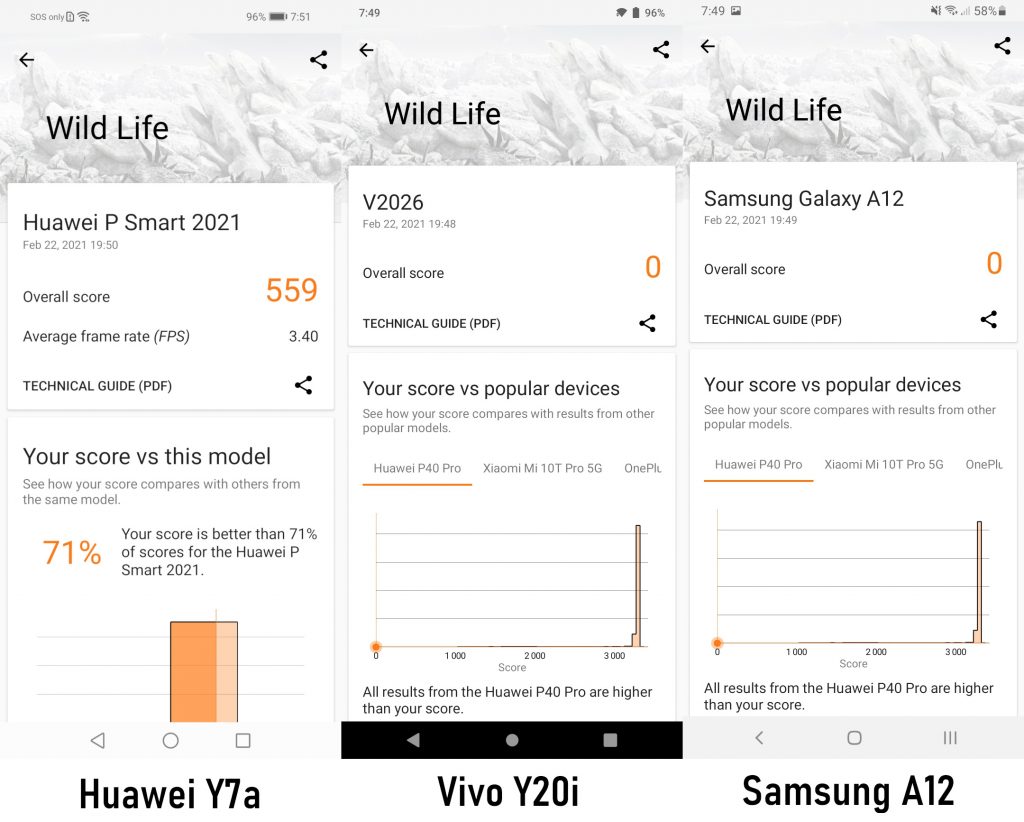 A benchmark that was even more telling of the Y7a’s power advantage is 3DMark Wild Life. While the Y7a scored 559 on the test, the Y20i and the A12 were not able to run the benchmark at all (hence the zero scores).

For gaming then, there is no question that the Y7a is the most capable among the three.

The Y7a didn’t just prove to be the most powerful for gaming, it’s also the best for productivity and everyday use. In our time trying out the phones, the Y7a proved to be the fastest and snappiest among the three, even when quickly switching between apps. 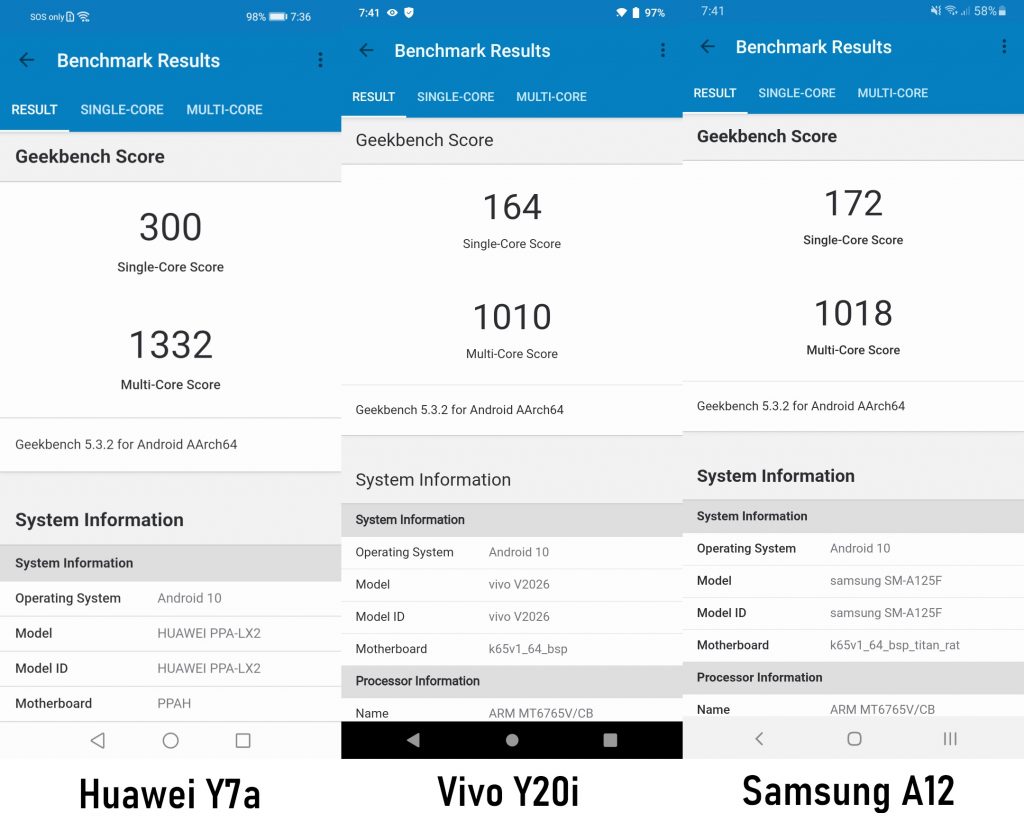 Benchmarks for general performance also proved this as the Y7a had the highest GeekBench 5 score among the phones in this showdown.

Aside from great everyday performance, the Y7a also has the advantage when it comes to features. While the Y20i and A12 have good UIs, the Y7a’s EMUI 10.1.1 has a bit more features that users should find useful, including video call app MeeTime as well as the nifty Knuckable Screenshot feature. 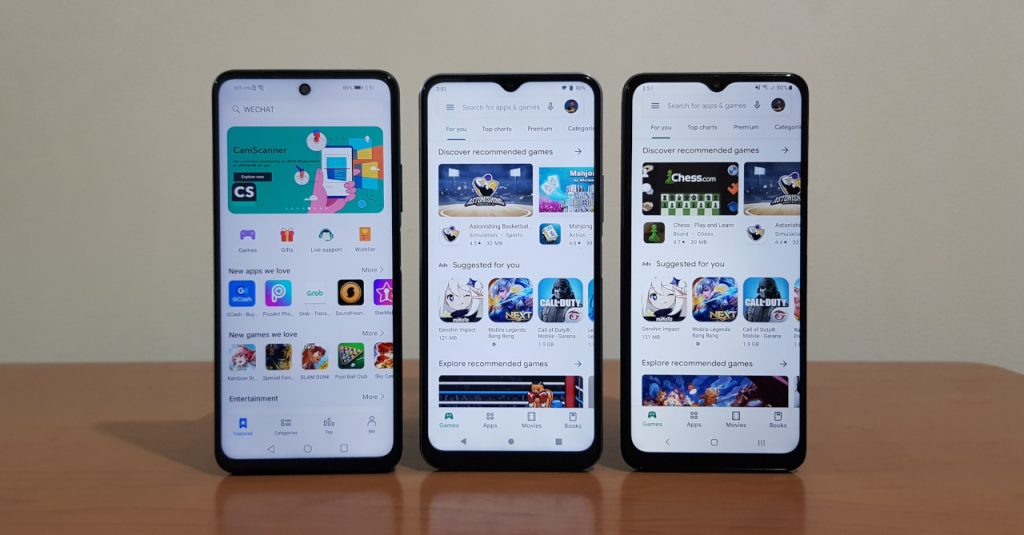 As for apps, the Y20i and A12 use the Google Play Store as its app store. Meanwhile, the Y7a has the AppGallery and Petal Search Widget combo for downloading apps. While new Huawei users may not be familiar with the said app store, using the AppGallery and Petal Search Widget is quite easy. Not to mention that the AppGallery already has tons of today’s popular apps such as TikTok, Mobile Legends, PayMaya, GCash, and more. On top of this, there are also multiple other ways to install apps on a Huawei device.

Given all of its advantages in general performance, the Huawei Y7a is the winner for everyday reliability.

The final test in our showdown is a battery life comparison. All three phones have 5,000mAh batteries, meaning they can all last for well over a day, even with heavy use. What differentiates the three though is fast charging. 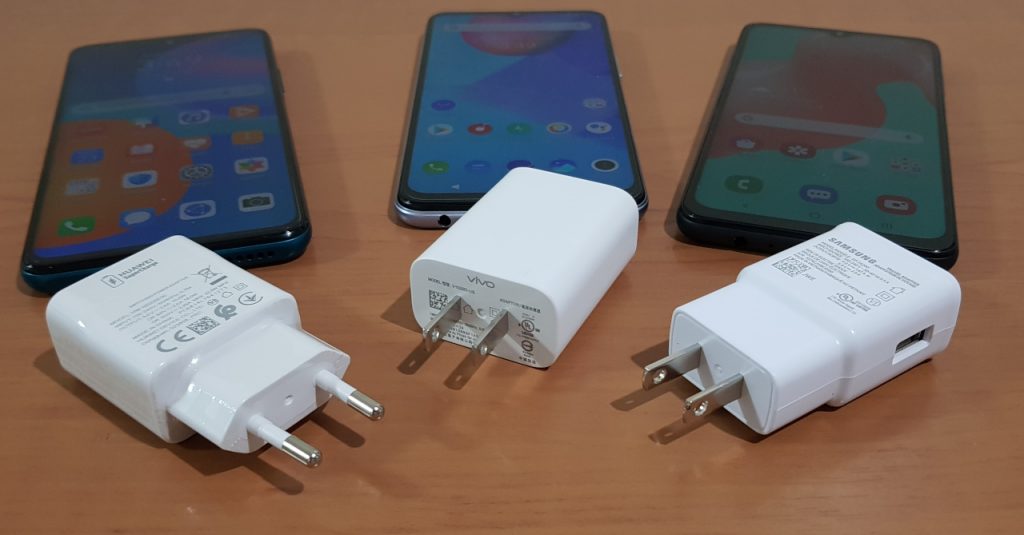 While the Y20i and A12 support 18W and 15W fast charging respectively, the Huawei Y7a leaves them in the dust with its 22.5W SuperCharge support – the highest among entry-level phones. Thanks to this, the Y7a is able to charge 46% in just 30 minutes, with a full charge needing only around an hour. The best part is users don’t need to buy a separate fast charger as the Y7a comes with one inside the box.

For comparison, the Y20i does not come with a fast charger while the A12 comes with one, but it’s only a 15W charger. Given this, the Y7a is the most convenient to use among the three as users won’t have to keep their phone charging for long to use it again. 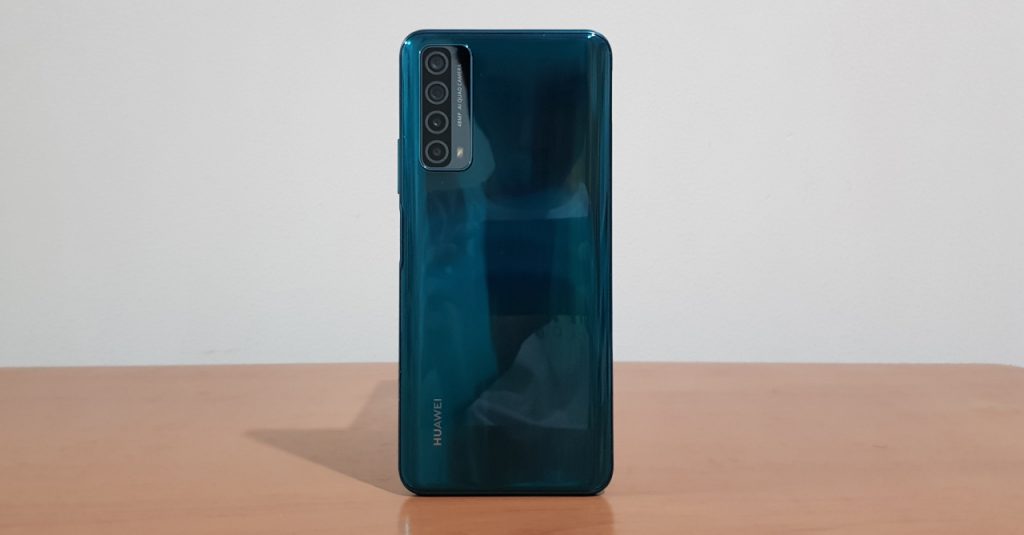 While all three phones are good on their own, when compared with each other, there’s no question that the Huawei Y7a is the best deal. Not only does the Y7a have the largest (and most high-res) display, it also has the best performance for day-to-day use and for gaming. The Y7a also has the most flexible camera setup among the three thanks to its 48MP-led quad camera setup, not to mention that it’s the fastest to reach 100% charge via the 22.5W SuperCharge.

In all categories, the Huawei Y7a is the winner of our budget smartphone showdown, and that’s not including their price tags. At PHP 7,599, the Y7a offers more bang-for-buck than the Vivo Y20i (PHP 7,490), and it’s also more affordable than the Galaxy A12 (PHP 9,990). So, if you’re on the lookout for an entry-level smartphone, the Y7a is a great choice!

Interested in getting your own Huawei Y7a? Get your own Y7a now via the following links:

Want to know more about the Y7a? Check out our full review of the phone here: