Is this the new mobile gaming standard? 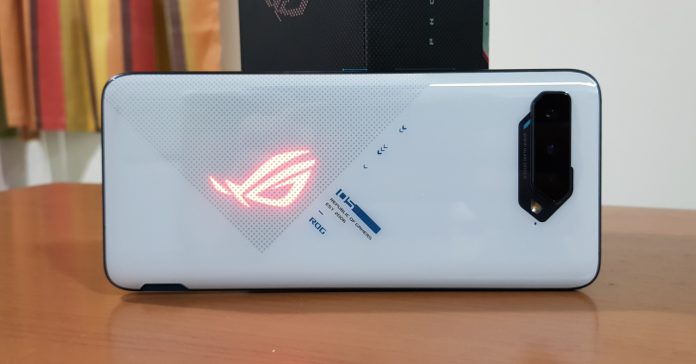 It’s been nearly three years since ASUS first debuted the ROG Phone, and at the time, it was one of the best smartphones for serious mobile gamers. Now though, we have the fourth iteration of ASUS’ signature mobile gaming series, the ROG Phone 5 (they seemingly skipped the “4” as the number is unlucky in certain cultures).

As with its predecessors, the ROG Phone 5 promises to be the most powerful one yet, and looking at the specs sheet, that’s an accurate claim. After all, the new ROG Phone packs the latest Snapdragon 888 processor, up to 16GB of RAM, and a 144Hz AMOLED display, among others.

Aside from having more power than last year’s model, the ROG Phone 5 is also the first in the lineup to have three models, namely the base, Pro, and Ultimate versions. Though don’t worry, all three are powered by the same processor, with the main differences being more RAM and the inclusion of ROG Vision displays on the back of the Pro and Ultimate. 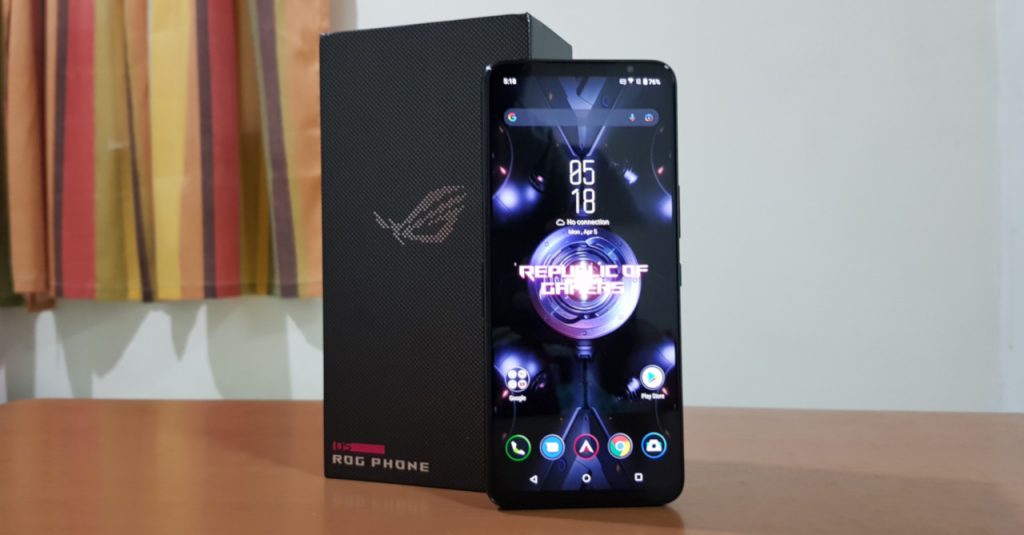 Ahead of the phone’s launch in the Philippines on April 10, we get our hands on the base ROG Phone 5. And after putting it through the paces, we finally have a verdict on if you should get the newest ASUS mobile gaming powerhouse?

So do we recommend it? Find out here in our ROG Phone 5 Review!

Previous ROG Phone models only came in one color–black. With the new model though, users now have the option between Phantom Black and Storm White. The unit that we have with us is in Storm White, and it’s definitely a looker. While some of the aggressive stylings of the previous models may have been toned down for the ROG Phone 5, this smartphone is still an eye-catching device thanks to its “dotted matrix” design which it shares with the newer Zephyrus laptops. The base model also retains the RGB ROG logo, in case you want the phone to pop out a bit more.

There area also some cool design flourishes along the phone’s sides. On one side, there’s a “GLHF” engraved near the bottom, while the opposite side has a power button with a blue accent which complements the overall color scheme of the phone. 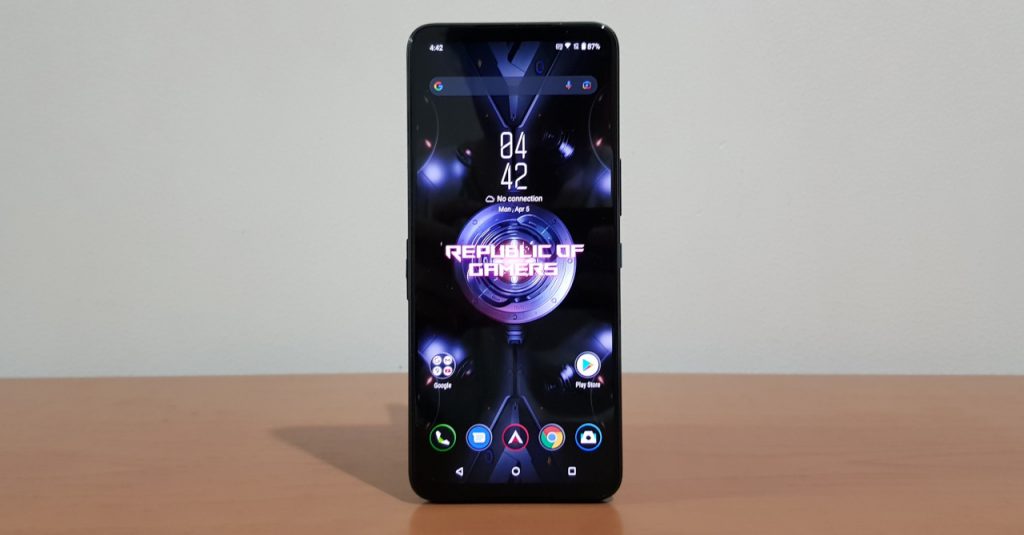 At the front meanwhile, is the phone’s large 6.78-inch display. While most flagship phones today have a holepunch notch, the ROG Phone 5 has a slim top bezel that contains the front facing camera. While this means the phone does not have the “all-screen” look of other flagships, we still quite like the ROG Phone’s design thanks to its symmetry and less distracting look (as holepunch notches can be distracting when watching videos). 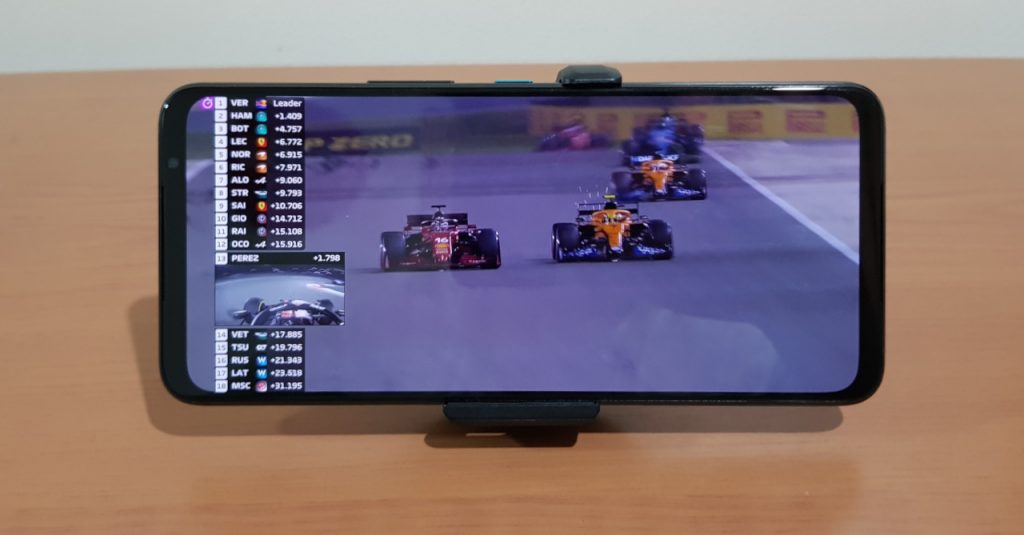 The phone’s 6.78-inch display has a 1080p resolution and uses an AMOLED panel. Thanks to this, binge-watching is excellent on the ROG Phone 5 as output is sharp and detailed, plus it has vibrant colors to boot. The size of the screen also helps make for a better viewing experience. Though if there’s one thing we could improve, it’s brightness; you’ll have to bump brightness to the middle even indoors.

What doesn’t need improvement though is the phone’s speakers. The ROG Phone 5 packs stereo onboard speakers that might just be one of the best we’ve heard. The speakers’ volume rivals even that of laptops, all while having impressive sound quality with a good amount of detail and bass. To top it all off, the phone still has a 3.5mm headphone jack–a rarity these days among flagships.

As mentioned above, the ROG Phone 5 is powered by a Snapdragon 888 processor which is complemented by up to 16GB RAM (up 18GB RAM for Ultimate model). Though for reference, the ROG Phone 5 review unit we have with us is the 16GB variant.

Before we share our gaming experience on the ROG Phone 5, we first have to mention that our gaming tests were done with the phone’s X Mode turned on. In case you’re unfamiliar, X Mode is the game boost mode of the ROG Phone, and it optimizes the phone for the best gaming performance. While it drains the battery more, we recommend using it when you game on the phone.

For less demanding games like League of Legends: Wild Rift, the ROG Phone 5 did not run into any issues at all, even at the max graphics settings. Wild Rift ran smoothly in our time with the phone, though the game does not have the option of running faster than 60FPS at the time of this review’s publishing. 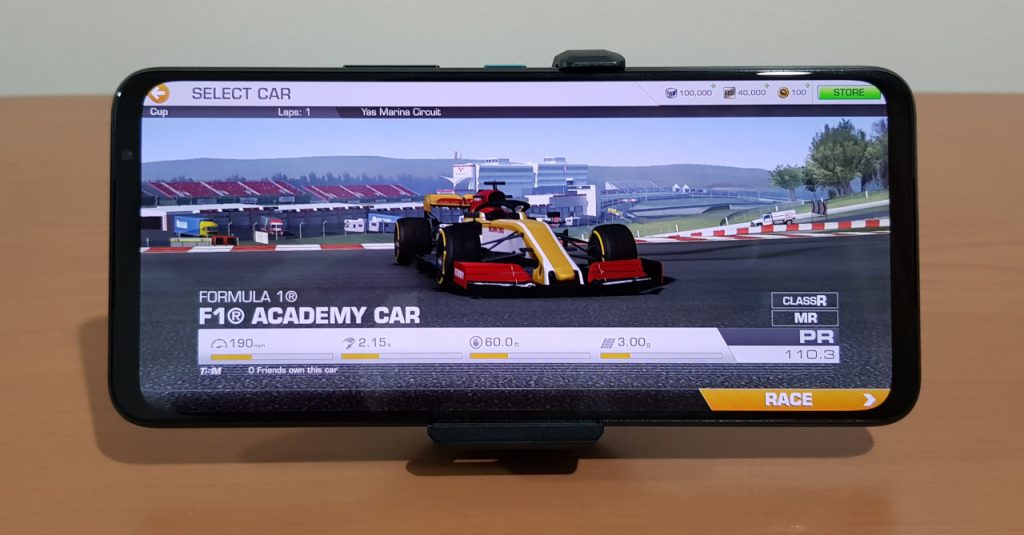 While Wild Rift wasn’t able to take full advantage of the ROG Phone’s high refresh rate display, there are lots of other games that do so. One such title is Real Racing 3 which ran incredibly well on the ROG Phone 5. Thanks to the phone’s powerful hardware, you’re guaranteed a smooth experience, especially when playing high FPS mobile games.

One nifty thing about the ROG Phone 5 is that its Armoury Crate app features a handy list of games that support 120Hz and 144Hz refresh rates. This means you can easily find games that can take full advantage of the phone’s adaptive refresh rate.

As for the most demanding titles like Genshin Impact, the ROG Phone 5 again was able to run them. While putting Genshin’s graphics settings at max set the performance load to overclocked, I found that the game was still playable, though it did make the phone run a bit warm. 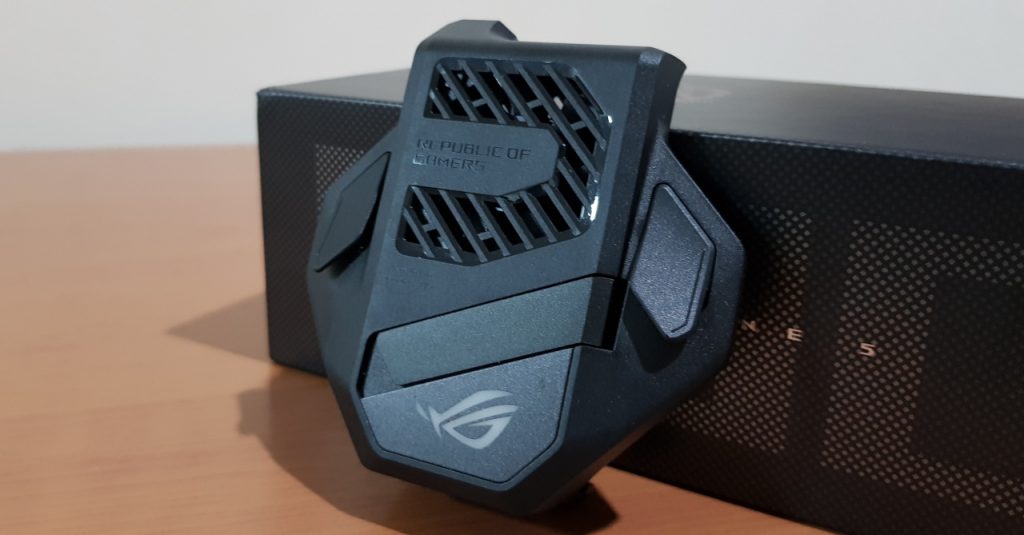 In these cases, the ROG Phone 5’s redesigned AeroActive Cooler is a nifty accessory to have as it helps cool the phone when playing hardware-intensive games. Similar to the previous models, the base ROG Phone 5 comes AeroActive Cooler, at least in the Philippines. The Pro and Ultimate models also come with one inside the box.

While not everyone will need the AeroActive Cooler, it’s still a nice add-on to have. Plus, not only does it give extra cooling, it also adds an extra 3.5mm headphone jack at the bottom–a better position when playing games as your headphones’ cable won’t get in the way of your phone grip.

Along with the cooler, there will also be several other accessories for the ROG Phone 5, though we have yet to try them out.

While the camera setup may not seem as impressive compared to other flagships, I did find that the ROG Phone’s camera app has several useful features. For one, it has a digital level that tells you if your shot is straight. The app also automatically uses Night Mode when shooting in low-light.

As for images, the phone’s main shooter captures good images with lots of detail in daytime and indoors. In these conditions, the 64MP shooter almost matches the image quality of other flagship cameras.

At night though, there is a slight dip in quality. While the automatically deploying Night Mode makes low light images looks fairly sharp and bright, the results are a slight notch below that of true flagships like the S21 or the Mate 40 series.

The same can be said with the phone’s 13MP ultra-wide camera. Daytime shots turn out great, though again, there is a dip in image quality when taking images at nighttime.

The 5MP macro camera is nice to have if you love taking close-up photos. But if not, we would’ve preferred a telephoto shooter instead.

Finally, the ROG Phone 5 takes good selfies that should satisfy most users. Be warned though, the beautification can be a bit artificial at the higher settings.

Thanks to its powerful processor and loads of RAM, the ROG Phone 5 is an incredibly smooth daily driver, whether you’re browsing social media or doing some photo/video editing while on-the-go. The addition of an adaptive refresh rate display also makes for an even smoother user experience.

Aside from its great usability, the ROG Phone’s UI is also worthy of praise. Even if it has a strong “gamer” look to it, the UI is actually close to stock Android in terms of features. The UI also doesn’t have a ton of annoying pre-installed apps (always a plus for us).

As for connectivity, the ROG Phone has two USB Type-C ports: one at the bottom and one on the left side which is used for accessories. The phone, as mentioned above, is also one of the few flagships to retain the 3.5mm headphone jack. Again, this is highly appreciated, especially for users who still use wired headphones (like myself).

Now for battery life, the ROG Phone’s massive 6,000mAh battery lets it last for well over a day of medium to heavy use based on our ROG Phone 5 review period; this is impressive given the phone’s high refresh rate (which usually eats up a phone’s charge). Of course, if you play for hours on end with X Mode on, you can drain the phone’s charge in a day. When that happens though, the phone has a 65W fast charger inside the box which charges the phone from 0 to 100% in just under an hour. 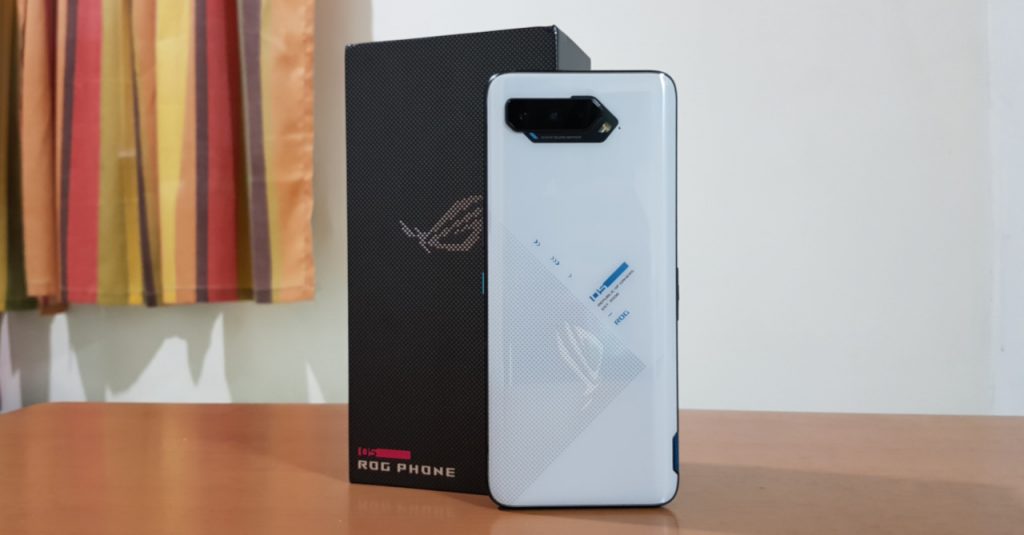 So what’s our verdict in this ROG Phone 5 review? Well, we are highly impressed with what ASUS managed to achieve. Once again, ASUS has delivered an excellent smartphone that’s built specifically for gaming, all while not skimping on other features such as display, design, and battery life.

Sure, the phone’s cameras are not the most flexible for a flagship, but for users who prioritize mobile gaming above everything else, the ROG Phone 5 is definitely a top pick!

Is the ROG Phone 5 be worth it though? At a starting price of PHP 39,995, it’s definitely well worth considering for serious mobile gamers.