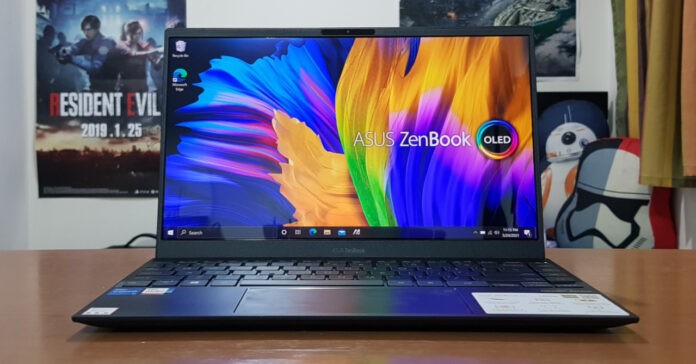 Back in March, ASUS launched two ZenBook laptops in the Philippines: the ZenBook Duo 14 UX482 and the ZenBook 13 OLED UX325. The Duo, which we reviewed back in March, is a refresh of ASUS’ signature dual-screen laptop, and it packed not only new hardware, but also a revamped design for its second screen. 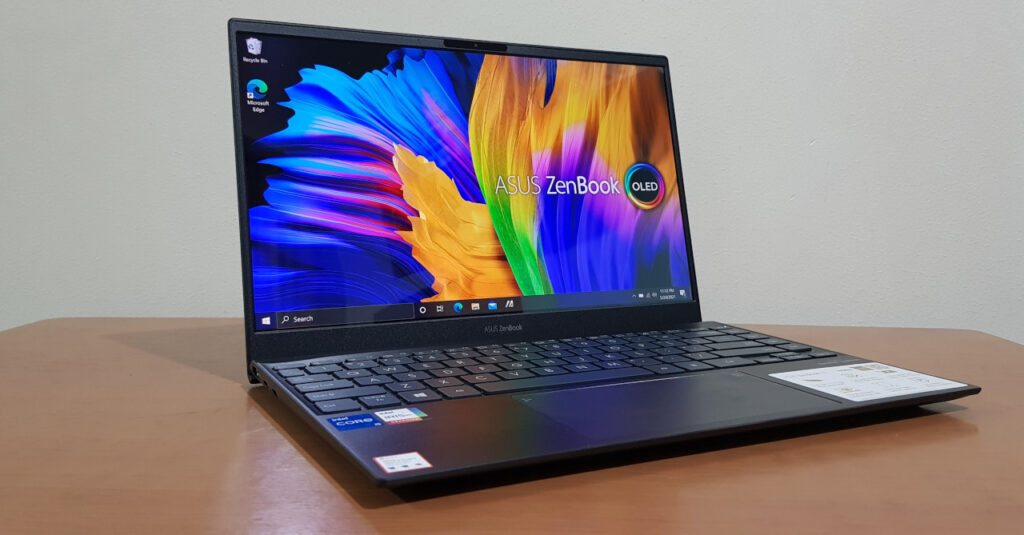 While the OLED screen is the main highlight of this new laptop, the display isn’t everything. After all, a notebook must also perform well for everyday tasks and for productivity, especially as lots of people today have work-from-home setups. 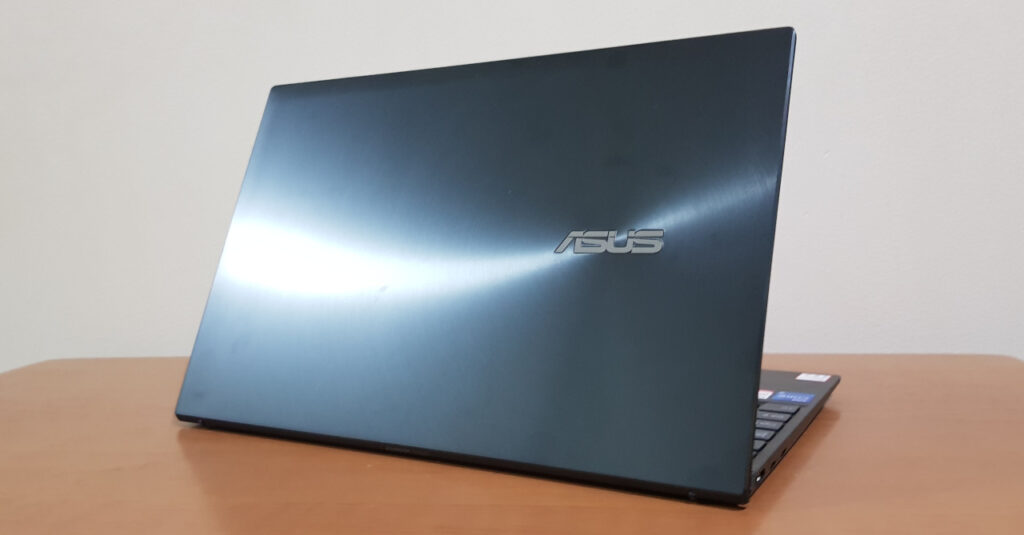 Design-wise, the ZenBook 13 OLED is pretty much identical to the ZenBook 13 UX325 we reviewed a couple of months back. That’s not a bad thing though as the previous ZenBook 13’s design already looks nice and premium, especially with the concentric circle design and brushed metal finish.

For I/O, the ZenBook 13 OLED has 2 Thunderbolt 3 USB-C ports, a USB 3.2 Gen 1 Type-A port, an HDMI port, and a MicroSD card reader. While the ZenBook OLED beats out other ultraportables in terms of connectivity, we would’ve wanted at least another USB Type-A port, as well as a 3.5 headphone jack. 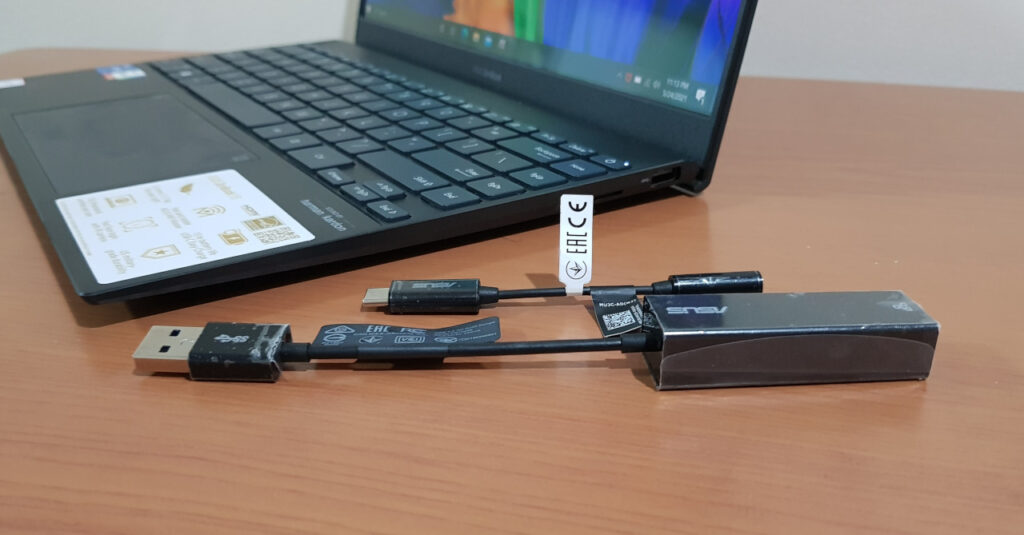 Thankfully, the ZenBook 13 OLED comes with two dongles inside the box that will add more connectivity options. One is a Type-C to 3.5mm headphone jack (definitely a must-have), and the other is a USB Type-A to ethernet port. While most users will likely stick with WiFi when connecting to the internet, having the option for a wired internet connection is much appreciated. 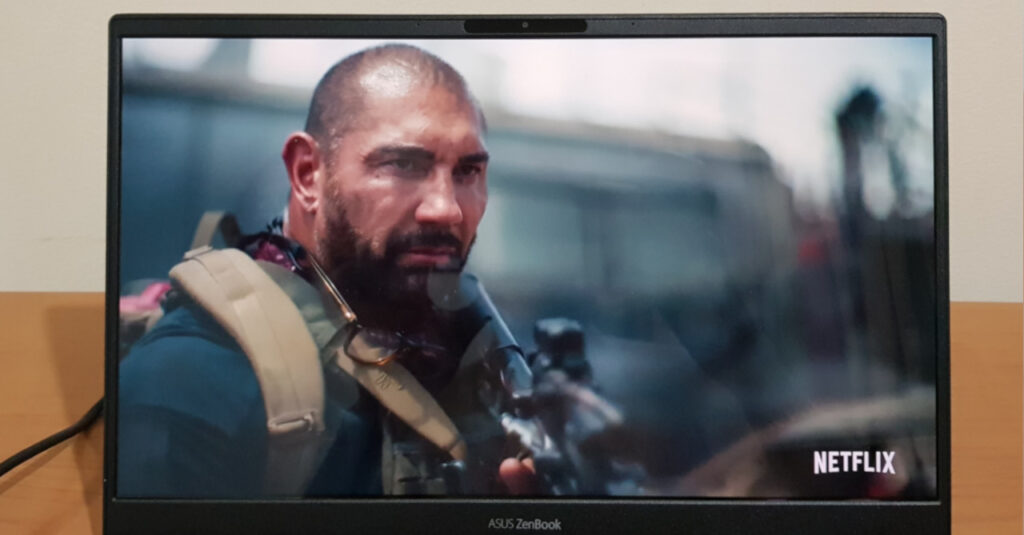 One specific scenario that showcases this laptop’s OLED screen advantage is with watching widescreen films. As OLED screens have more “true” blacks compared to LCD displays, widescreen content is more immersive to watch as the black bars on the top and bottom are much less noticeable.

Take note though; while the ZenBook 13 OLED is a great laptop for binge-watching, its screen is still on the small side. So this is recommended for users who already watch content on laptops or tablets (instead of TVs or big monitors). 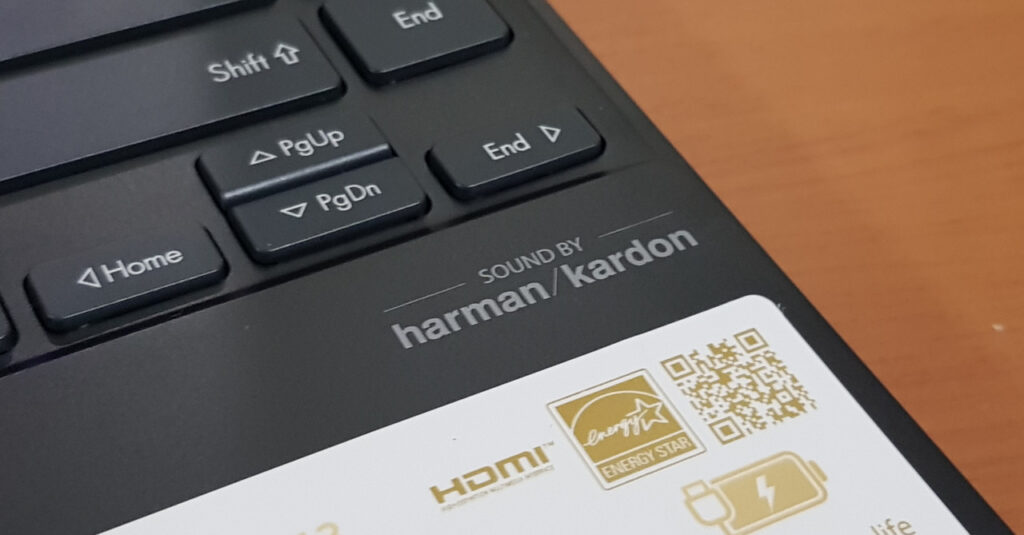 For audio, the ZenBook 13 OLED has onboard speakers tuned by Harman/Kardon. Similar to other ZenBooks, the onboard audio quality is of decent quality. Though again, the ZenBook 13 OLED’s audio output is a bit on the quite side. Headphones or external speakers are definitely recommended for movies, music, or gaming. 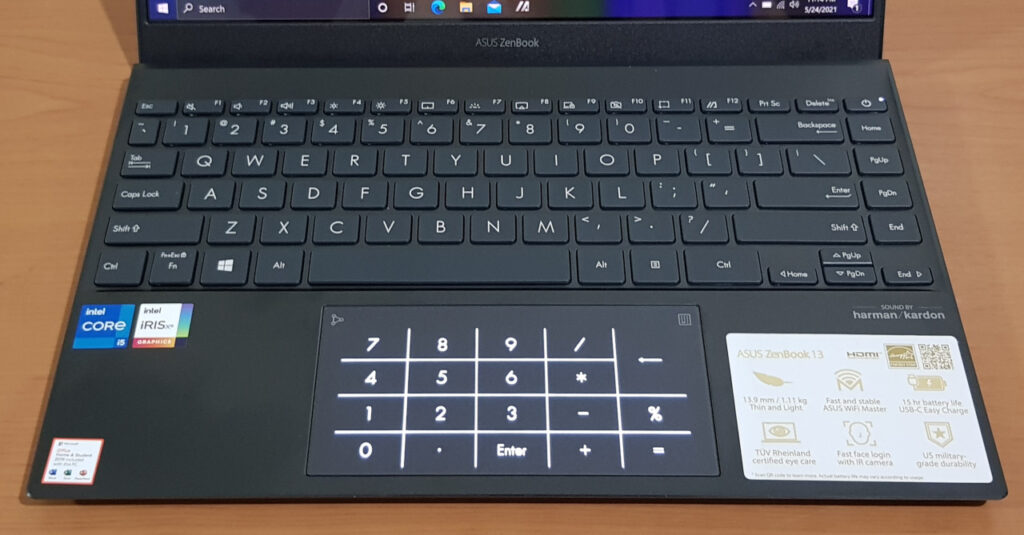 As I mentioned in my previous ZenBook 13 UX325 review, this laptop’s keyboard felt quite nice to type on; after all, they share the exact same layout. Though I did notice that the arrow keys are a bit on the small side. While it’s not an issue for me as I rarely use the arrow keys, some users might not like their size. 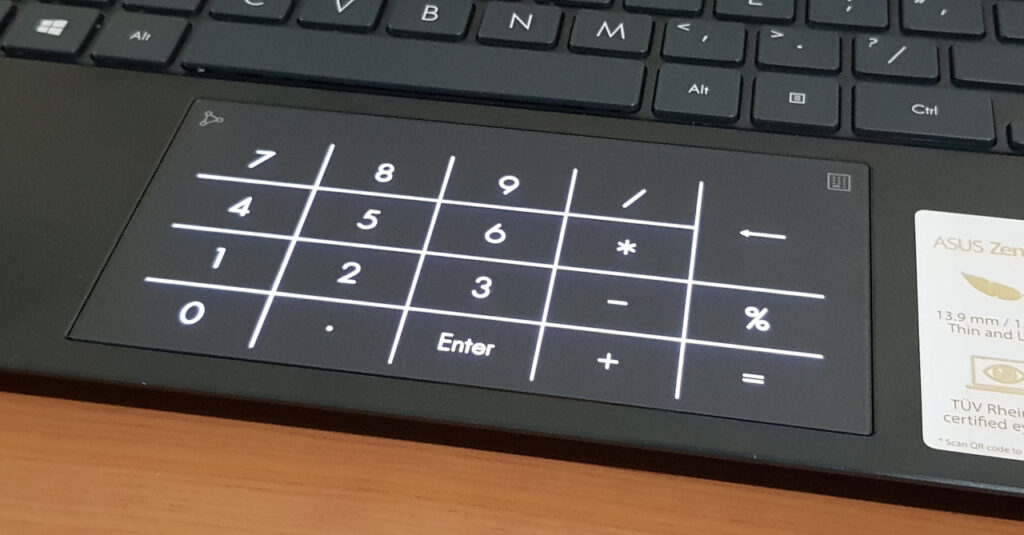 Making its return in the ZenBook 13 OLED is the NumberPad 2.0. As always, this numpad is always a plus, especially for users who often need to use a calculator for work or school. In case you haven’t tried or used a ZenBook with a NumberPad 2.0 yet, you can easily switch it on or off by holding the top right part of the trackpad. This means you won’t have to fear accidentally typing numbers while using the trackpad.

The ZenBook 13 OLED isn’t a gaming laptop, so don’t expect it to run the latest triple-A titles. But the laptop’s 11th-gen Intel Core i5 and Intel Xe integrated graphics is promising in terms of performance. So, we tested the OLED with some esports games, and it did pretty well. 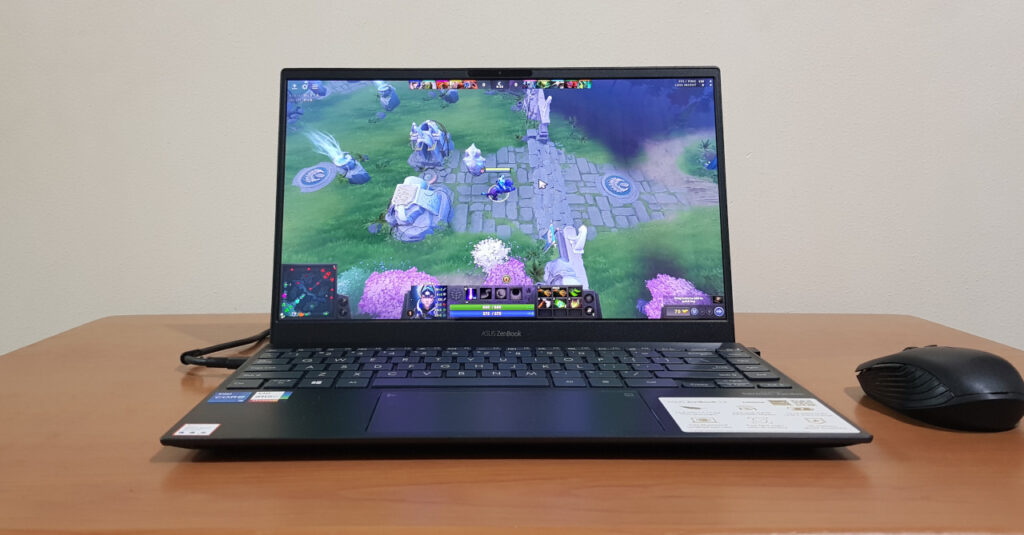 For example, Dota 2 ran at a stable 100 FPS at 1080p and at the lowest settings. Sure, it’s only able to run this smoothly at lower graphics, but it’s still quite capable if you play these less hardware-intensive esports titles.

Given this, the ZenBook 13 OLED should also be a decent enough laptop if you play indie games, or any type of title that doesn’t require a gaming GPU. Take note though, this laptop only has 8GB of RAM, meaning you might want to close most of your chrome tabs if you do plan on playing some games on this.

As for synthetic benchmarks, the ZenBook 13 OLED scored 12620 on 3DMark Night Raid (a test for integrated GPU-equipped PCs/laptops), and 4182 on PCMark 10 – this is pretty similar to the result of the previous UX325 on PCMark. 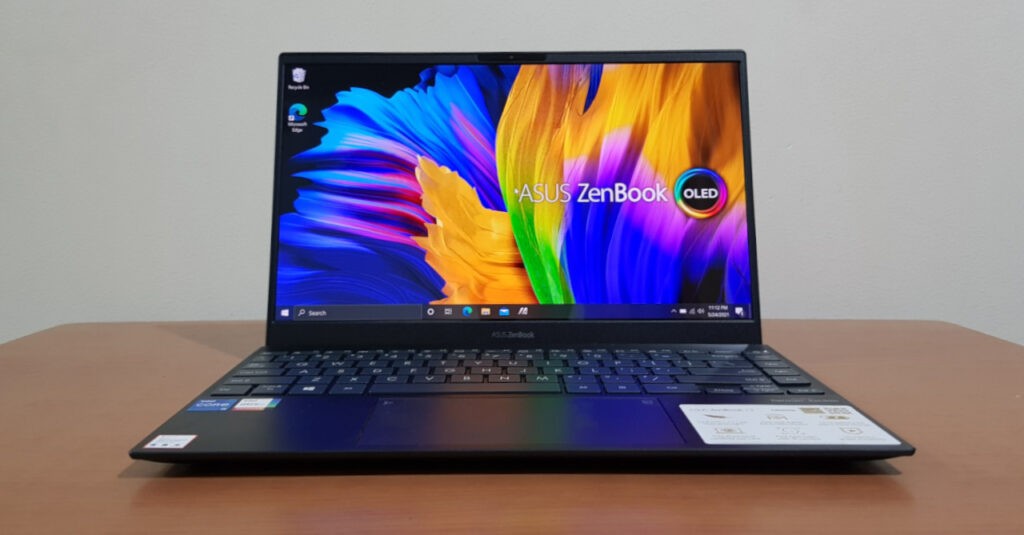 Given the surprisingly good esports games performance, it should come as no surprise that the ZenBook 13 is also great for everyday use. If you need a laptop to easily handle browsing, office apps, and some light photo editing, the OLED will not disappoint.

Though do take note that this laptop isn’t designed to be a workstation, meaning you can only use it for light editing work. After all, it only has 8GB of RAM and an integrated GPU. 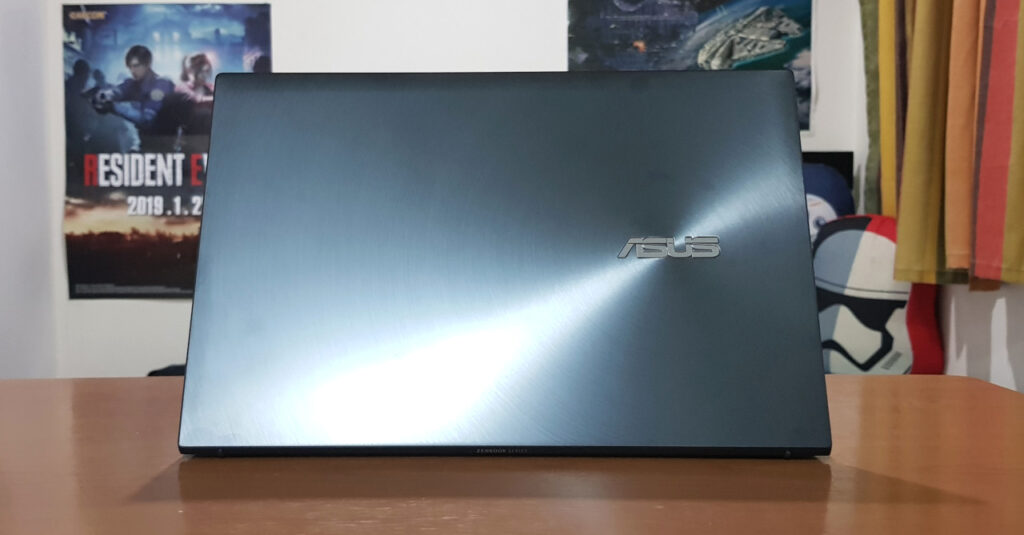 What impressed me the most with the laptop though is its battery life. After playing a 2 and 1/2 hour movie at 50% brightness and volume (with Wi-Fi on), the ZenBook 13 OLED still had 80% of battery life remaining! This makes it one of the longest-lasting laptops we tried, and it means you can use this on battery for upwards of 8 hours. 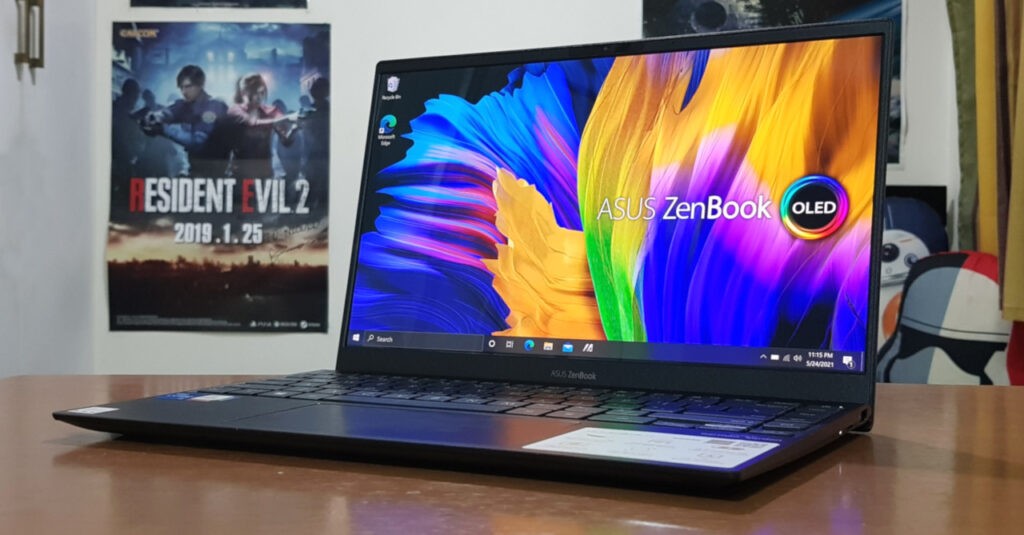 So what is the verdict in our ZenBook 13 OLED review? Well, this is definitely a good ultrabook option thanks to its good performance, great display, and excellent battery life. If you’re on the lookout for a new productivity partner for work or school, you won’t go wrong with this new ZenBook.

As for price, the OLED has an SRP of PHP 59,995 – that’s PHP5k more than the standard UX325. Is it worth it? Well, if you also use your laptop as your main device for movie/series watching, then the ZenBook 13 OLED is definitely worth considering over the standard model.

- Advertisement -
Previous article
Uniqlo is opening a store in Animal Crossing: New Horizons
Next article
A new Dragon Ball Super movie is in the works, and it is coming in 2022