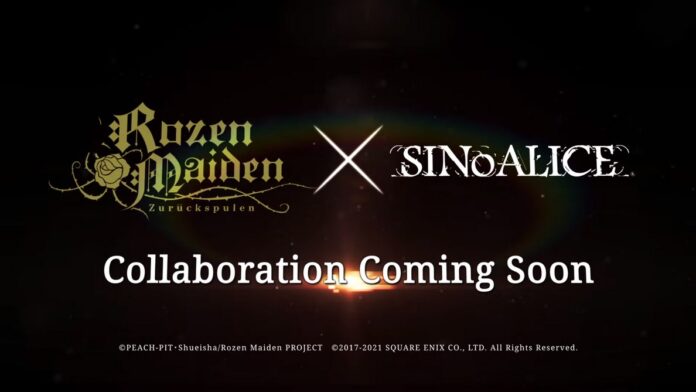 After collaborating with Re: Zero, mobile game SINoAlice will soon collaborate again with another animated series – Rozen Maiden. Square Enix and Pokelabo Inc. also launched a special social media campaign for the players to participate.

Rozen Maiden X SINoALICE will add six of the Rozen Dolls: Shinku, Hinaichigo, Kanaria, Souseiseki, Suiseiseki, and Suigintou. This collaboration will also feature music from the anime series, plus a special collaboration scenario for the event. Based on the character design from the teaser, the collaboration will most likely feature the 2013 adaptation.

Meanwhile, the aforementioned social media campaign will give 300 Twilight Crystals once the campaign has reached over fifty shared posts via Facebook or Twitter. You can head over SINoALICE’s official website for the full mechanics of the campaign.

Pre-collab "Wind? Or don't wind for crystals?" Campaign
Tap the image and post a screenshot of your results with the tag #CrystalsForRozenMaidenCollab !
50+ posts will earn everyone 300 twilight crystals!#SINoALICEGlobal

▼Post by replying to "Will you wind for crystals?"▼ pic.twitter.com/xGqzm3kuJD

In case you’re unfamiliar with Rozen Maiden, the series follows Jun Sakurada, a middle school student who is chosen to become Shinku’s master and participate in the Alice Game along with the other Rozen dolls and their masters. The winner of the Alice Game will become “Alice” and will be reunited with their creator, Rozen. Rozen Maiden first aired in 2004 and returned in 2013 when it was picked up by a different studio as a new series.

No dates have been announced yet when will the event launch, but SINoAlice is already available for both Android and iOS devices.

If you want to know what more about SINoALICE, the game is one of our top mobile games picks: