Now this is true horror. 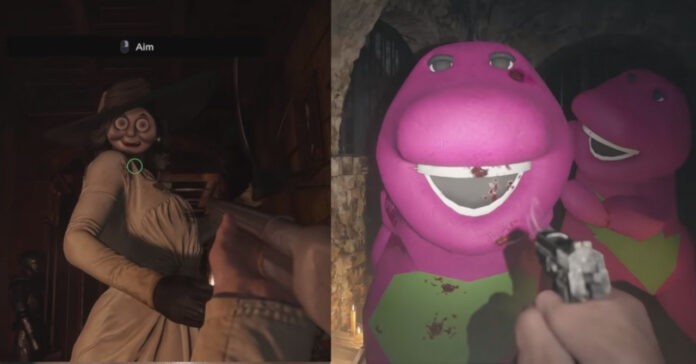 It is only just one day before the release of Resident Evil Village, meaning lots of players are likely eager to finally meet the Tall Vampire Lady, Lady Dimitrescu, and of course to get to other stuff like saving Ethan’s daughter and figuring out what is up with Chris Redfield.

So, it’s no surprise that players were delighted when Capcom released a Resident Evil Village demo a week before the game’s release. Unfortunately, the demo did not last long since it was only available for a limited time. But it did not stop players to be creative with the limited time that they had with the demo, spawning multiple hilarious mods, tweaking the game’s horror atmosphere into something bizarre.

My time on the demo is over, but before i did it hahaha#VILLAGE #MODS #RE8 #barney pic.twitter.com/y8IiP4hrgV

Twitter user Marcos RC did a lot of work during his time the demo, dropping multiple model-swaps, and one of them is the Friendly Dinosaur Barney. Marcus RC replaced the enemies in the cellar area of the castle, prompting the Purple Dinosaur to chase and hurt Ethan in the most bizarre-looking way.

Barney can also be replaced by Brazilian model Ricardo Milos who flexes his muscles ready to hurt the poor Ethan. Other mods from Marcos RC also includes other entries from the series, like the Merchant from RE4 who replaces the Duke as the shopkeeper.

Meanwhile, another crazy modder that goes by the username XxCrazyPotatoxX from nexus mods turned Lady Dimitrescu into a nightmare fueled engine with his Count Theodora mod. This mod can be implemented by installing the Fully Mod Manager for RE Village demo, and it changes Lady Dimitrescu’s face to Thomas the Tank Engine. Thanks to Thomas’ blank stare that feels like he’s staring straight to your soul, players won’t even think twice about running for their dear lives when they encounter Count Theodora.

If you think that these mods are too weird or too scary for your taste, check out Capcom’s promo video turning Lady Dimitrescu into an adorable puppet.