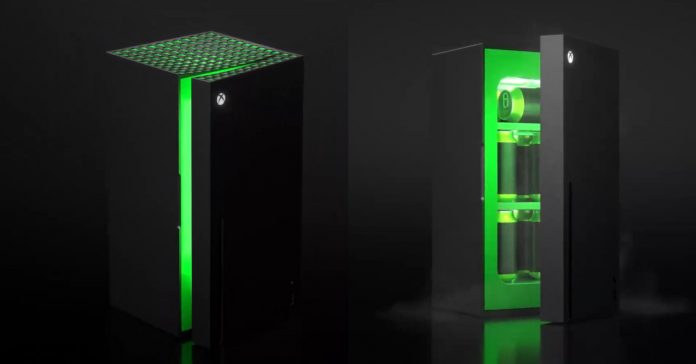 At the Xbox and Bethesda joint showcase at E3 2021, Microsoft revealed a ton of new games, as well as announced updates on upcoming titles. Though Microsoft did reveal something unexpected – an Xbox Mini Fridge!

While the Xbox Fridge is now official, Microsoft has not revealed much else about it. Though from the fridge’s “World Premiere,” we can see that the mini fridge should be able to hold several cans of your favorite beverage, so at least we have some indication of how big the unit is going to be.

Here are some more photos of Microsoft’s new mini fridge:

The Xbox Series X looking like a fridge has been a meme since it was first revealed back in 2019. And this isn’t actually the first time that Microsoft acknowledged it. Back in October 2020, made a full-size Xbox Series X refrigerator, though it wasn’t put on sale. The fridge was only given to a couple of people, including the likes of iJustine and Snoop Dogg. While this Mini Fridge won’t be as big as the said Series X refrigerator, big Xbox fans will definitely want to add this to their gaming setup.

The Mini Fridge by Microsoft will release soon.

- Advertisement -
Previous article
realme C25S launches in the Philippines on June 15
Next article
Guardians of the Galaxy game announced, releasing this October