A 5G phone that won't break the bank. 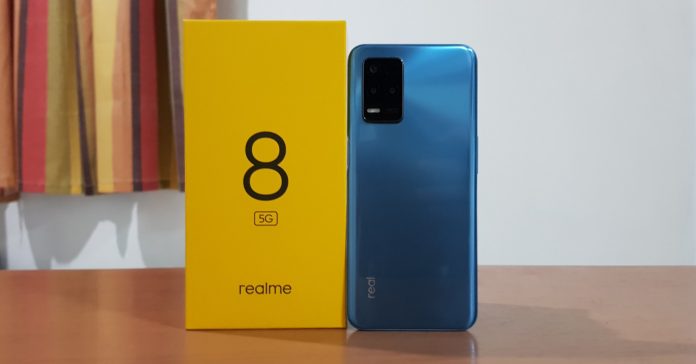 Recently, we got our hands on the realme 8 5G, the newest smartphone from realme that packs 5G connectivity and a promising processor, all at a more affordable price point compared to other 5G phones. In our first impressions of it, the realme 85G proved to be quite an interesting smartphone, especially as it comes with some higher-end features.

Take for example its display; the phone comes with a 90Hz refresh rate screen which is faster than the 8 Pro’s 60Hz panel. The phone also comes with 8GB of RAM which promises fast and snappy performance even when multitasking, as well as a large 5000mAh battery that can let it last for a while before needing a top-up. 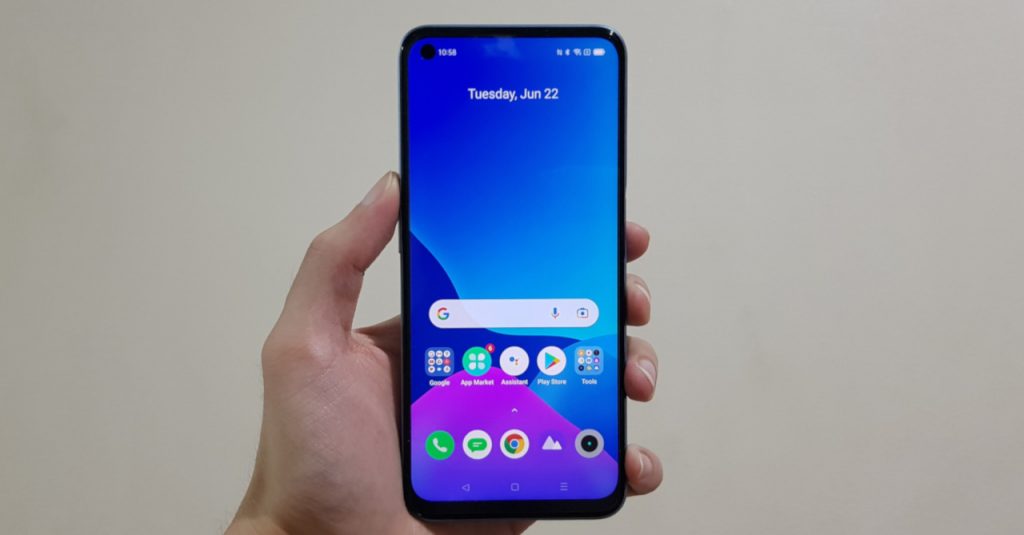 As a whole though, does realme’s newest smartphone prove to be a good choice in today’s competitive smartphone market? Find out here in our realme 8 5G review! 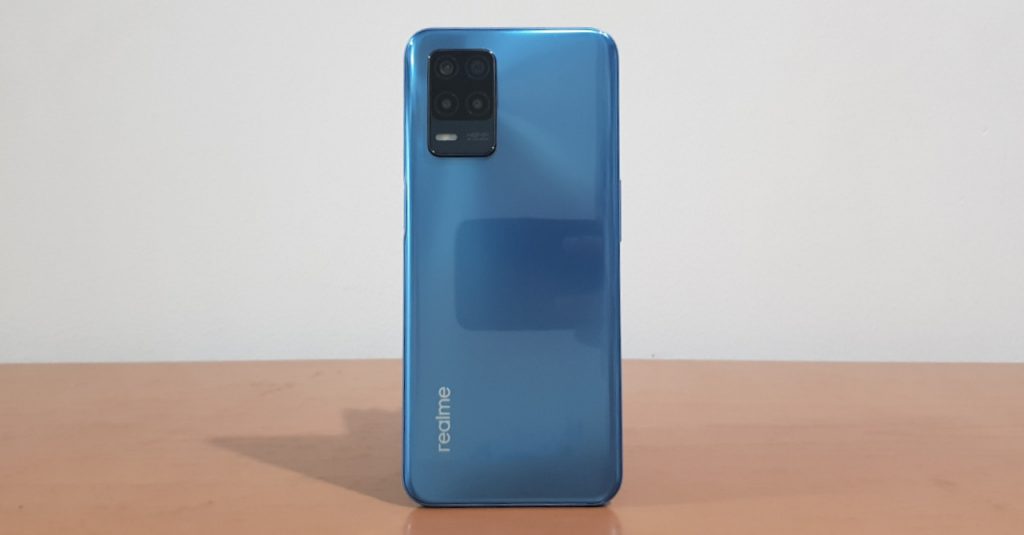 Before we check out performance, let’s first take a look at phone’s design. Unlike the 8 Pro which has a matte finish and a large “DARE TO LEAP” logo, the realme 8 5G has a glossier back that’s quite eye-catching, especially in the Supersonic Blue colorway. It’s not your typical glossy-backed phone though as the realme 8 5G can seem like it has a matte finish when viewed in some angles. The phone is also not as slippery as it seems, meaning it won’t slip out of your hand easily even if you’re not using a case. 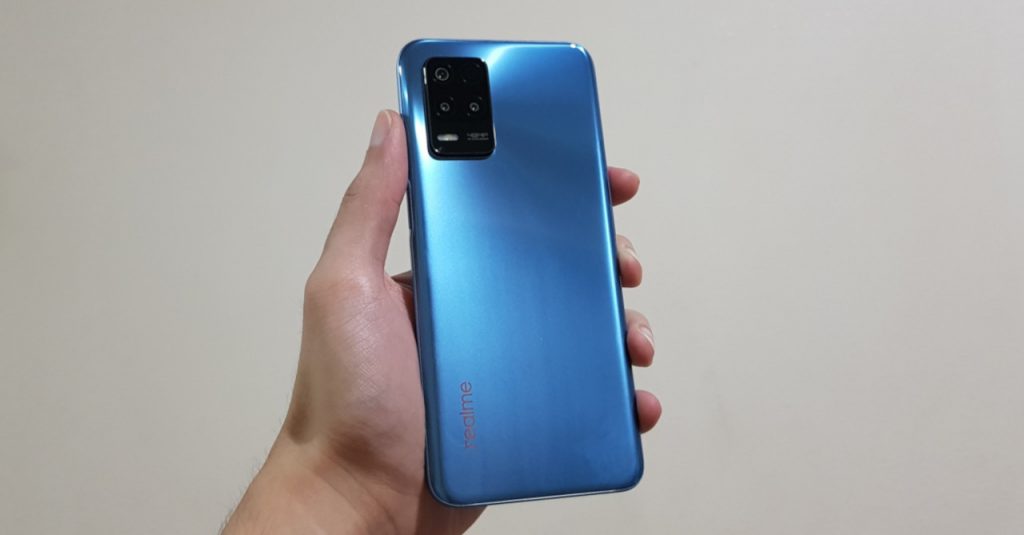 One thing to note though is that the realme 8 5G is still a bit of a fingerprint magnet. Fingerprints won’t be as apparent as with glass-backed phones, but they show up enough that I’d still recommend that you use a case for this phone. Thankfully, the phone does come with a free clear case inside the box. 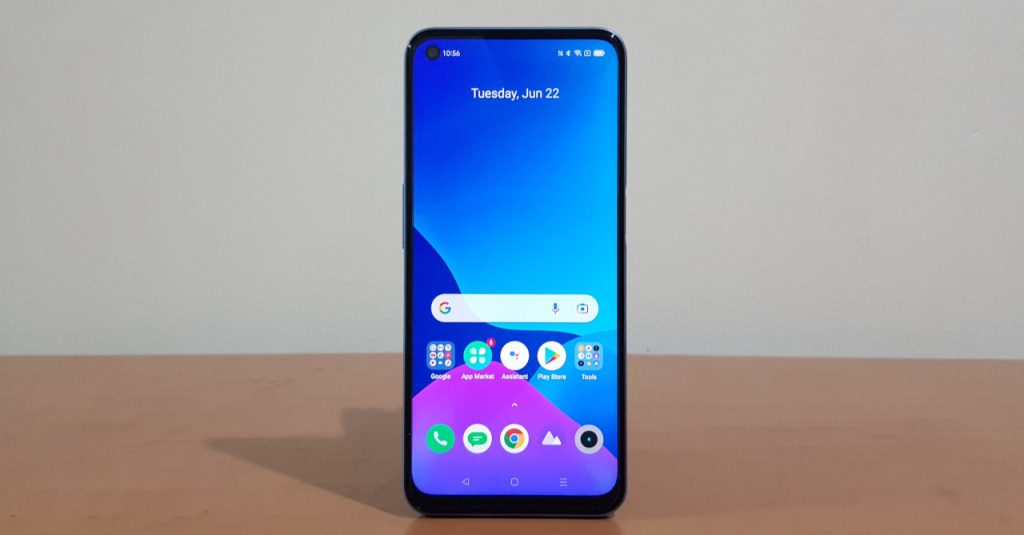 Moving to the front, we have the phone’s 6.5-inch FHD+ display that has slim bezels at the sides, though there is a slight chin at the bottom. We also noticed that the front camera notch is every so slightly bigger (or a least it seems bigger) than other phones we’ve tried. This is far from a dealbreaker though; in fact, we prefer the notch placement on the upper left side as it is less distracting that holepunch notches at the middle. 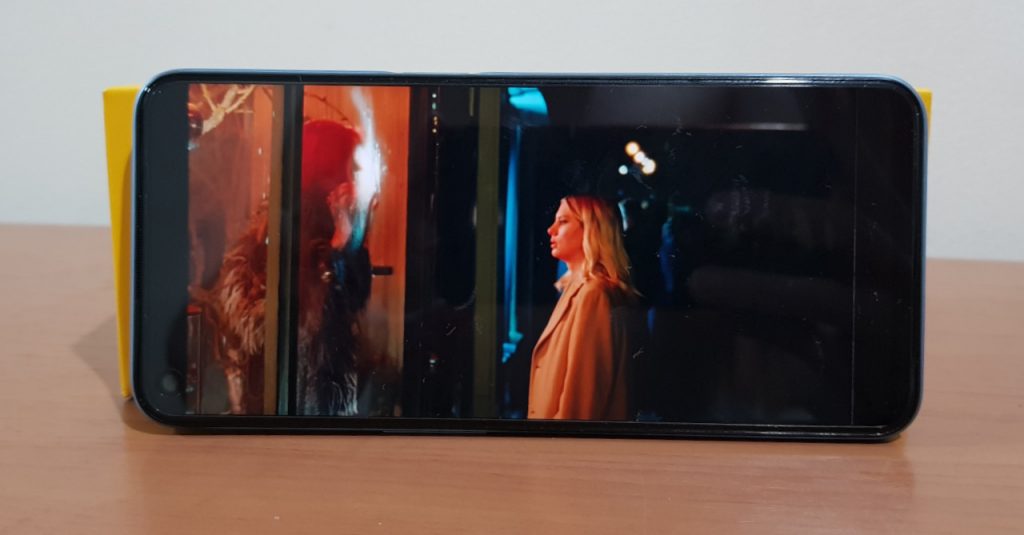 The 6.5-inch display may only be an LCD screen, but we found that it’s still a good match for binge-watching. Thanks to its fairly large size and Full HD+ (1080p) resolution, the realme 8 5G is a good partner for users who love watching movies and shows on their phone, especially considering the phone’s price point.

When binge-watching on this phone though, we highly recommend using headphones or external speakers (via Bluetooth or through the phone’s 3.5mm headphone jack) as the realme 8 5G’s internal speaker is not ideal for movies/shows. While audio quality is clear enough for loudspeaker calls, it can sound flat and tinny for movies.

This new realme phone is powered by a MediaTek Dimensity 700 processor, a 5G-ready system-on-a-chip that’s designed for entry-level to mid-range phones. While its main highlight is providing 5G connectivity at a lower price, does it hold up well for gaming? 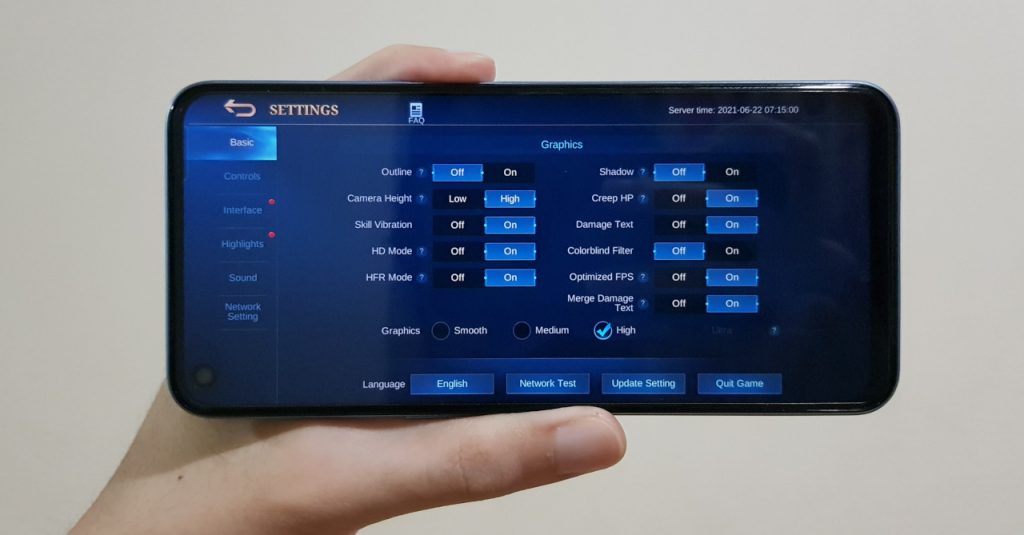 For starters, we tried out less demanding games such as Mobile Legends: Bang Bang. The game was able to run these types of games pretty well, with ML running smoothly at the High graphics setting.

Finally, the most demanding games like Genshin Impact can also run on the phone, but only on the lowest graphics setting. This should come as no surprise though given that Genshin Impact is a tough game to run on mobile.

For cameras, realme packed the 8 5G with a 48MP F/1.8 main + 2MP portrait + 2MP macro triple-rear camera setup, as well as a  16MP F/2.1 front camera. The phone’s camera configuration is pretty standard for an affordable mid-ranger, but the lack of an ultra-wide camera is a bit of a surprise, especially when even budget phones these days have a dedicated ultra-wide shooter.

At night, the 48MP main camera can take quality low light shots. Surprisingly, even the phone’s auto mode can capture good enough night photos. Of course, if you are shooting in areas with even lower light, the Night Mode is a nice feature to have as it can capture brighter night shots.

The 2MP macro camera performs as you would expect as it can take decent close-up shots, but only when there’s enough light.

Finally, the realme 8 5G can take nice selfies that should satisfy most users. Though make sure to turn down the beautification setting for a more true-to-life look (if you’re like us and prefer a more natural look for selfies). 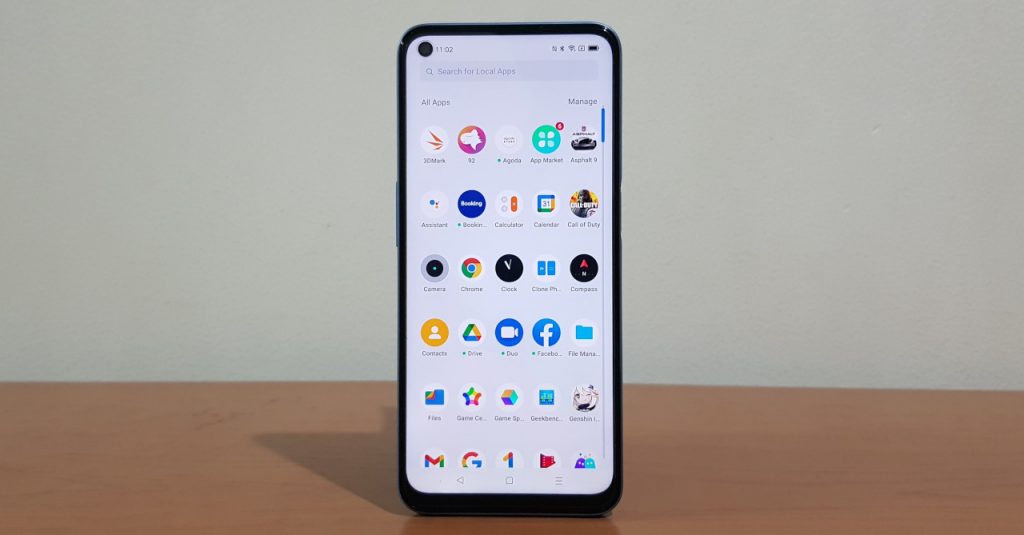 One thing that realme highlighted about the phone is its Dynamic RAM Expansion which can “expand” the phone’s 8GB of RAM by using the phone’s internal storage. Personally, I didn’t really see or notice this in action, though it was likely the reason that I was able to have smooth video calls on it.

Performance aside, one of the key things that make the realme 8 5G stand out in the entry-level to mid-range segment is 5G connectivity. Given that 5G is available in a lot of areas now, coupled with the fact that even 4G SIMs can connect to 5G networks, this means now is a great time to get a 5G device. This makes the realme 8 5G worth checking out, especially for users who want a more “future-proof” device (at least when it comes to mobile connectivity).

As for battery life, the realme 8 5G delivers well over a day of use on a single charge thanks to its large 5000mAh battery. If you use it as your main device (in lieu of a laptop), you can drain it in a day. But if you use it as a secondary device for work/communication, the realme 8 5G can easily last for two days on a charge. 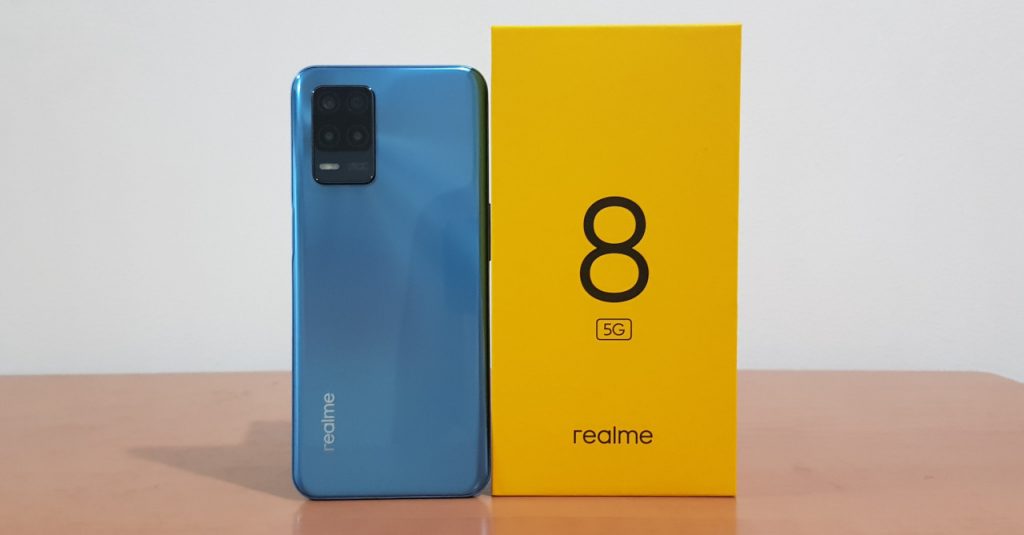 At its SRP of PHP 11,990, the realme 8 5G is a good deal thanks to its good performance, capable cameras, and excellent battery life. Though the best thing about the phone is that it’s 5G-ready, making it one of the most affordable 5G phones available now.

Sure, an ultra-wide camera would’ve been nice to have. But overall, if you want a phone that can take advantage of 5G speeds without breaking the bank, the realme 8 5G is well worth considering.

- Advertisement -
Previous articleFF7 Remake was originally going to have a pole dancing scene at the Honeybee Inn
Next articleWhich online shopper are you according to Shoppe Philippines?