8 Teams, 500k in Cash prizes, the realme Mobile Legends Cup is back! 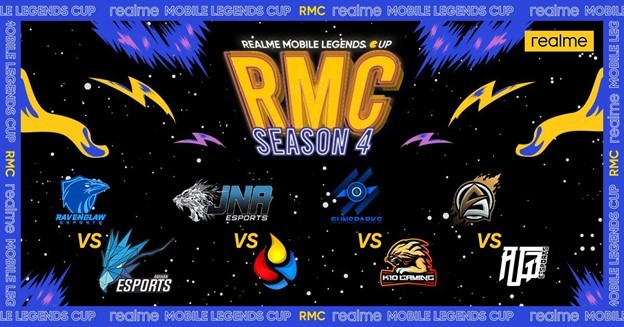 realme Mobile Legends Cup (RMC) is back and this 4th Season of the beloved handset brand’s Mobile Legend Local Tournament, 8 teams are vying to get the most out of the Php 500,000 prize pool!

Powered by the realme 8 5G, the fourth installment of the tournament was launched in June 17 with the first round of eliminations where hundreds of local Mobile Legends teams battled it out to qualify for the upcoming playoffs round.

The annual realme Mobile Legends Cup was borne out of realme’s mission to enable and empower Filipino gamers since its establishment in 2018. It has since bagged multiple recognitions, including 5 awards during the 18th Quill Awards earlier this year.

During the playoffs, eight top teams will battle against each other for top prizes and the recognition of being the best Mobile Legends team in the Philippines. The matches are as follows:

The realme Squad can tune in to the brand’s Facebook page every Thursday at 7pm starting July 15 until August 5 to witness the battle unfold. It is supported by a star-studded lineup of shoutcasters, which includes Sh1nboo, Manjean, Wolf, Butters, Rockhart, Rob Luna, Yuuko, and Pacchi.

For the latest in exciting Mobile Legends and esports action, tune in to the realme Philippines Facebook page every Thursday at https://www.facebook.com/realmePhilippines.

- Advertisement -
Previous article
Warehouse full of PS4 Pros raided in Ukraine
Next article
A new KonoSuba anime is in the works!