Check out the PlayStation Plus free games lineup for August 2021

Three new games will be available for free this August. 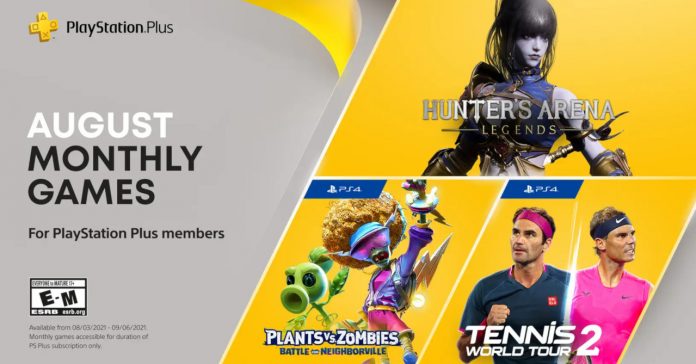 After getting A Plague Tale: Innocence and Call of Duty: Black Ops 4 last month, Sony has announced the PlayStation Plus free games lineup for August 2021. And for this coming month, the free games include Hunter’s Arena: Legends, Tennis World Tour 2, and Plants vs Zombies: Battle for Neighborville.

First up, we have Hunter’s Arena: Legends, a game that was announced during State of Play earlier this month. This game will be free for both PS4 and PS5 users with active PS Plus subscription, and it is a 30 player PvP & PvE battle-royale that’s set in an age where humanity battles each other as well as demons.

Next up, we have Plants vs. Zombies: Battle for Neighborville. Unlike the original Plants vs. Zombies, Battle for Neighborville is a third-person shooter where players can choose one of 20 customizable character classes in various game modes. In the game, players can team up with friends and battle enemy hordes in PvE, or go up against other players online.

Rounding out the PlayStation Plus August 2021 lineup is Tennis World Tour 2. This game lets players take control of the world’s top tennis pro, or create their own player to get the top spot in the world rankings. Aside from a career mode, the game also features local and online play in singles or doubles matches.

All three games will be available for active PlayStation Plus members until September 6, 2021.

- Advertisement -
Previous article
Fatal Frame: Maiden of Black Water gets a new trailer and release date
Next article
Microsoft announces that Xbox Series X|S are the fastest-selling Xbox consoles ever