Here are the PlayStation Plus free games lineup for July 2021

Get these games for free with PS Plus starting July 6! 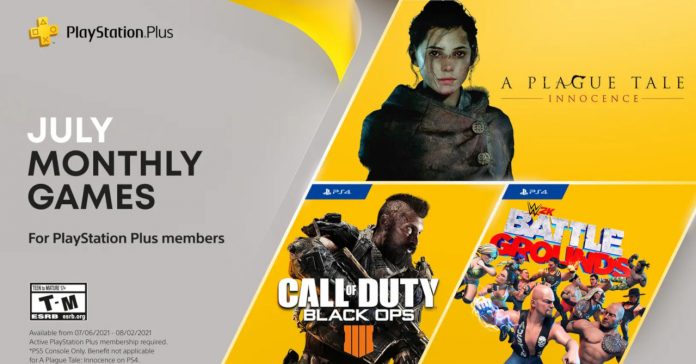 PlayStation has just announced the PS Plus free games lineup for July 2021. The free games for the coming month are A Plague Tale: Innocence, Call of Duty Black Ops 4, and WWE 2K Battlegrounds. Unlike PS Plus free lineups in previous months which had different free titles per region, the games that are free this July are the same in the US and in Asia.

One of the highlight games of the PlayStation Plus July 2021 lineup is Call of Duty: Black Ops 4. This game was first released back in 2018, and it features three multiplayer modes, including the standard Call of Duty multiplayer, the fan-favorite Zombies mode, and the large-scale Blackout battle royale mode.

Next up is WWE 2K Battlegrounds. Unlike the mainline WWE 2K titles, Battlegrounds is a more arcade-style game with over-the-top wrestling action complete with a more cartoony art style. In WWE 2K Battlegrounds, players can play through a story mode, as well as compete in online tournaments or in local multiplayer.

Finally, the third free game is A Plague Tale: Innocence, specifically the PS5 version. The game’s PS5 version will run at up to a 4K resolution and with a target framerate of 60 FPS.

Because of this though, A Plague Tale: Innocence will be free only for PS5 owners. For PS4 users though, Sony has announced that Virtua Fighter 5 Ultimate Showdown will be free again this July.

The July 2021 free games will be available for download from July 6 until August 2.