The film streams on Netflix this November! 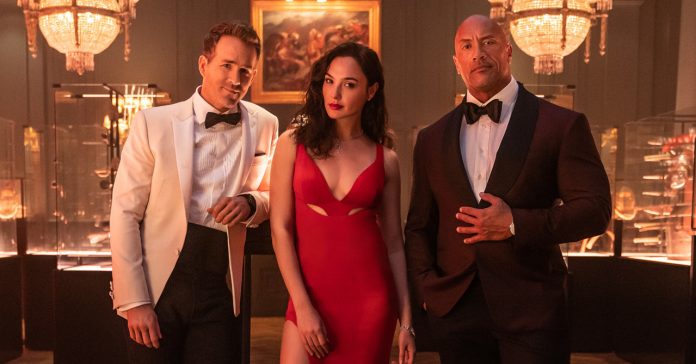 Dwayne Johnson recently announced through social media his next action film titled Red Notice. In this upcoming film, Johnson will be joined by Gal Gadot and Ryan Reynolds, and the film will release on Netflix this November.

While Netflix nor Johnson himself have revealed much about the upcoming movies, his post did contain some info regarding the characters of the main trio:

“The FBI’s top profiler.
The world’s most wanted art thief.
And the greatest conman the world has never seen.”

Meanwhile, here’s the short synopsis of the film via Netflix:

“An Interpol-issued Red Notice is a global alert to hunt and capture the world’s most wanted. But when a daring heist brings together the FBI’s top profiler (Johnson) and two rival criminals (Gadot, Reynolds), there’s no telling what will happen.”

From the looks of it, Red Notice will be an action film, possibly an action-comedy given Reynolds’ involvement. Plus, the film is directed by Rawson Marshall Thurber, the director of Central Intelligence and Skyscraper (both of which starred Johnson).

Red Notice will release globally on Netflix on November 12, 2021. Though before the film’s Netflix release, it will get a limited theater run in select countries.

- Advertisement -
Previous article
Up Your Geek Swagger with these Shopee 7.15 PayDay Sale Recommendations
Next article
Scarlet Nexus Review | Set your Brain Power to the Max