Is Huawei's premium tablet worth a buy? 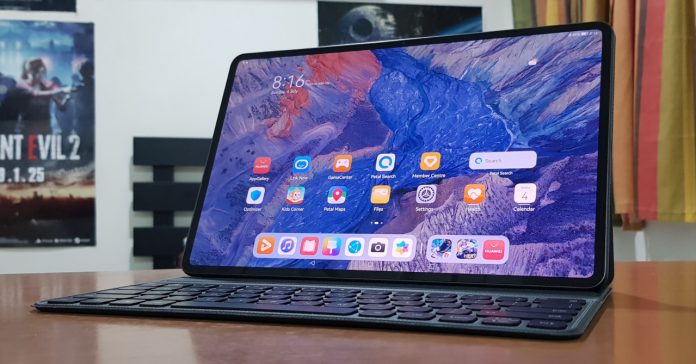 A few weeks ago, Huawei launched the MatePad Pro 12.6 in the Philippines, the brand’s newest premium tablet. This new tablet is also Huawei’s successor to last year’s MatePad Pro. And as expected, the Pro 12.6 has a bunch of upgrades over its predecessor, the biggest of which is the larger 12.6-inch OLED screen. For comparison, the previous MatePad Pro has a smaller 10.8-inch IPS LCD display. 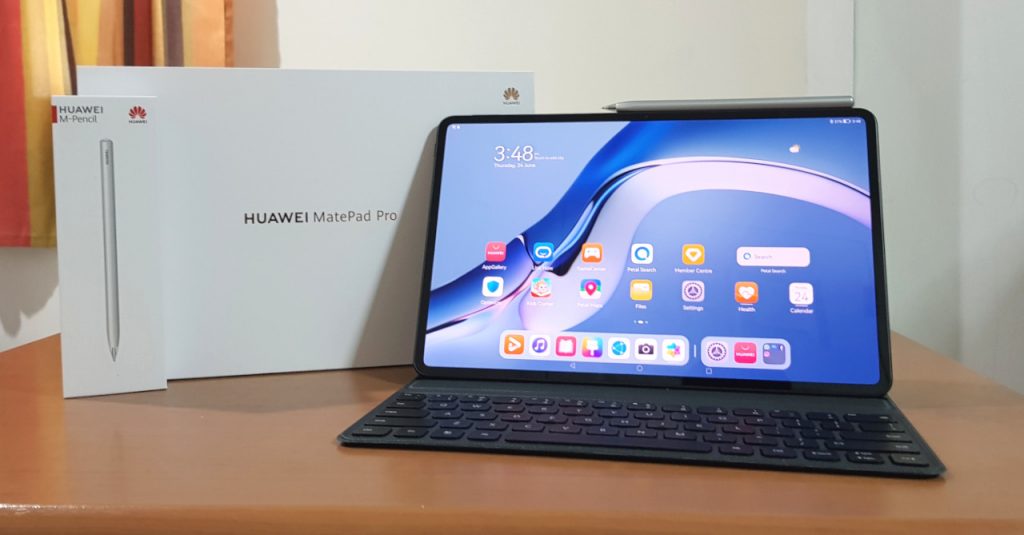 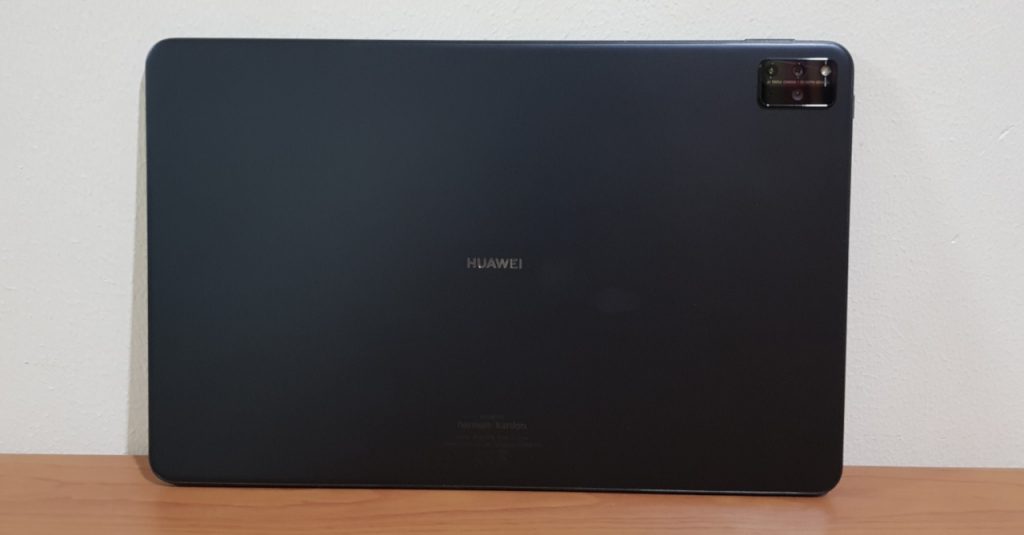 To kick things off, let’s first take a look at the tablet’s design. The new MatePad Pro 12.6 shares the subtle and sleek look of it predecessor with its matte finish and gray colorway. The back of the tablet doesn’t have much in the way of design flourishes as you’ll only see a small Huawei logo in the middle as well as the triple camera module on the top right. 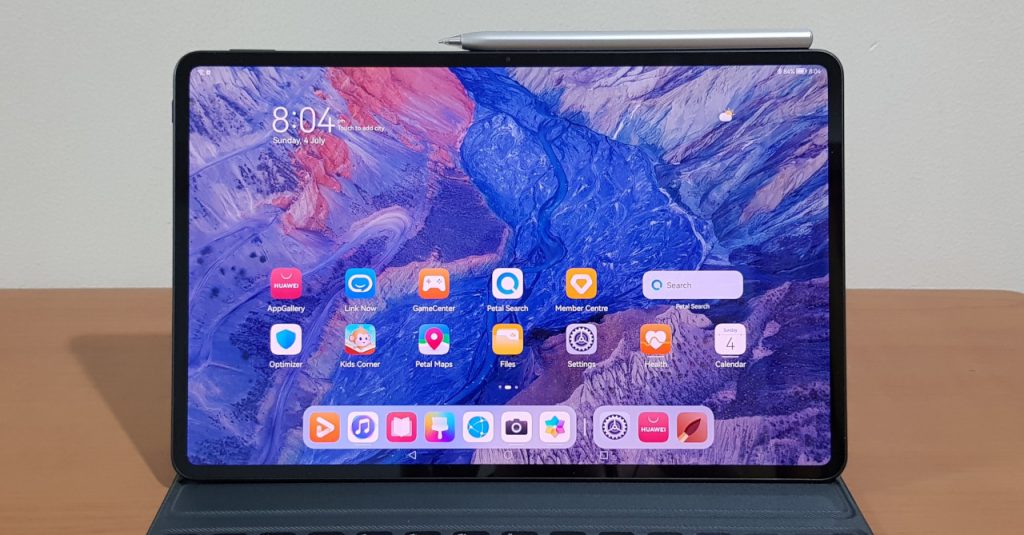 While the MatePad Pro 12.6 might not turn heads when viewed from the back, the tablet is quite attention-grabbing from the front thanks to its large and vibrant 12.6-inch display. The large size isn’t the only reason this is eye-catching though; the OLED screen also makes the MatePad pop, especially when you us a colorful wallpaper. On top of these, the display’s bezels are also quite slim, adding to its good looks.

Aside from being a good-looking device, the MatePad Pro 12.6 also feels nice to use in hand. While it may be a bit on the larger side for a tablet, it’s still fairly slim, meaning it’s not at all heavy and can be used in hand without much of an issue. 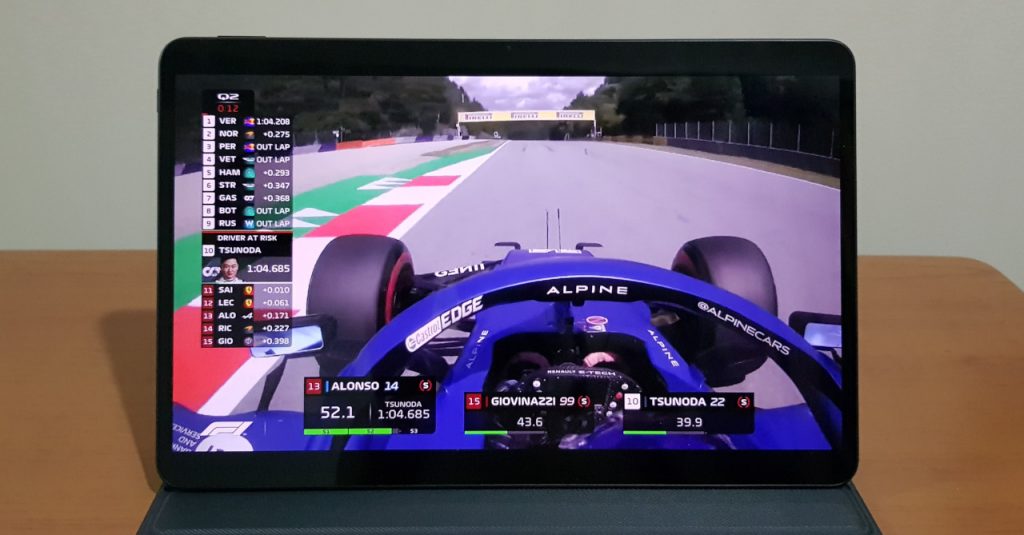 This MatePad’s display doesn’t just make it a good-looking device, it also makes it an incredibly good partner for binge-watching. The screen’s OLED panel, coupled with its large size and 2560 x 1600 resolution makes for a display that’s great for watching your favorite movies and shows.

As someone who still prefers to watch content on a TV (especially movies), I actually enjoyed watching movies and shows on the MatePad Pro 12.6 (it even became my go-to F1-watching device). This speaks volumes about the quality of the display, both in terms of resolution and color output. 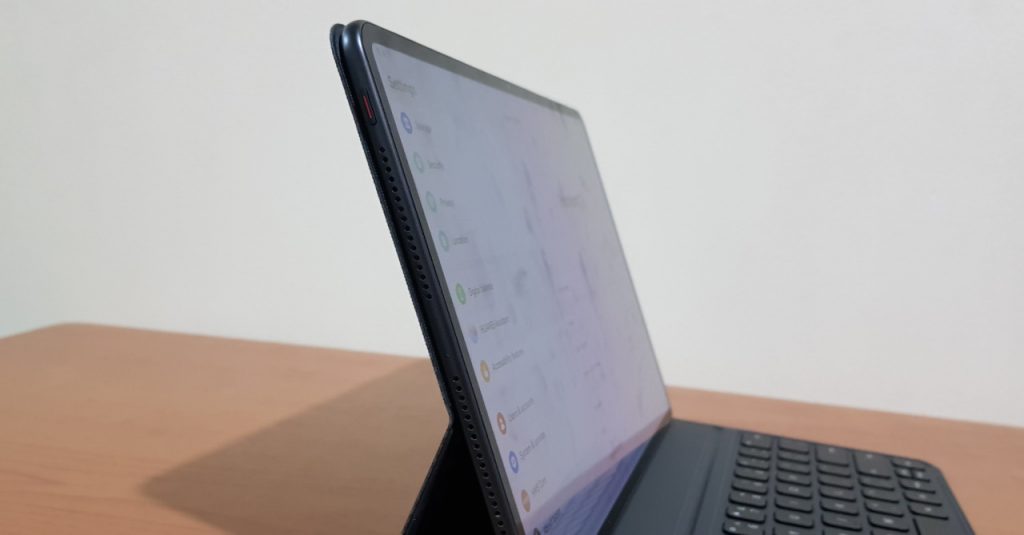 Aside from the bright and vibrant display, the MatePad Pro 12.6 also packs an impressive speaker setup. The tablet has four built-in speakers which can get quite loud and with good quality. In fact, while I’d still prefer headphones or external speakers, I wouldn’t mind watching a movie or an anime using just the onboard speakers.

As mentioned above, the MatePad Pro 12.6 is powered by a Kirin 9000E processor, a variant of Huawei’s flagship chipset that also powers the Mate 40 Pro. Thanks to this, the MatePad Pro is a capable gaming tablet that should easily run all games available on the AppGallery, as well as compatible Android apps. 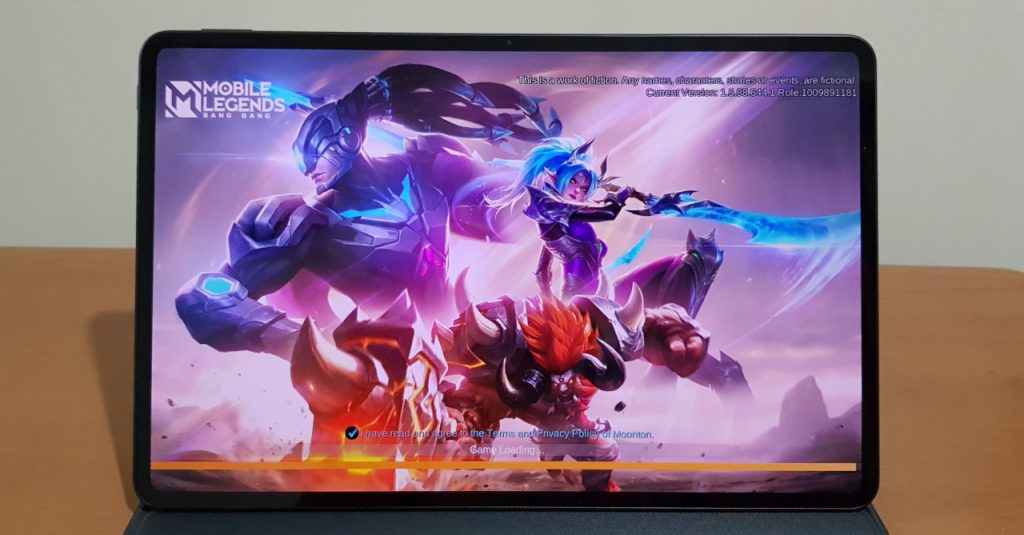 For instance, the MatePad Pro 12.6 makes quick work of Mobile Legends: Bang Bang as it runs the game on the High graphics setting smoothly and with no issues. This also means the tablet can easily run other popular games that aren’t hardware intensive. 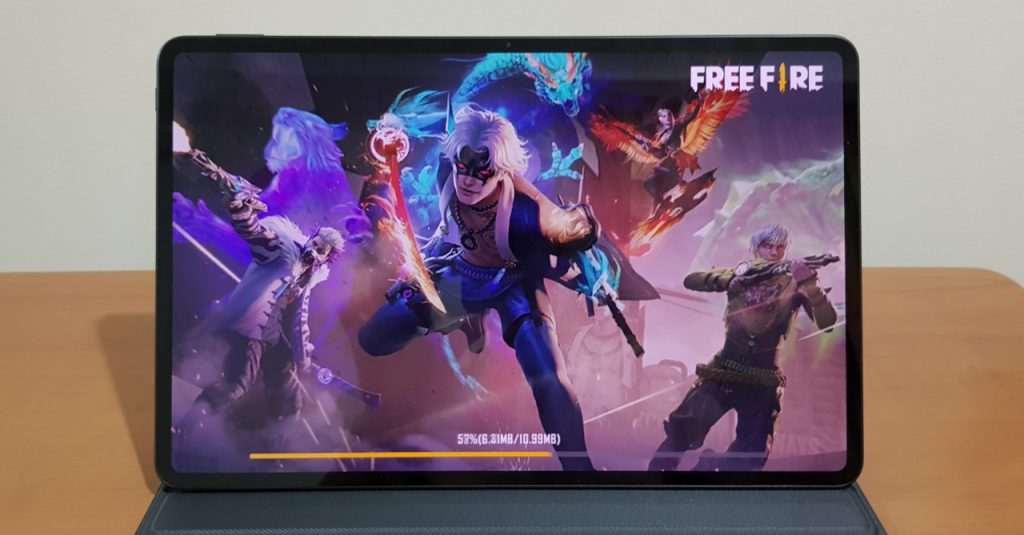 For more demanding titles, the MatePad Pro 12.6 does not disappoint. So if you like playing shooter games or racing titles that have heavier system requirements, Huawei’s new pro tablet won’t have any issues.

A quick note on games: while the MatePad Pro 12.6 runs on Harmony OS, the tablet is still compatible with Android games. This means you should still be able to download your favorite Android games that aren’t on the AppGallery via the Petal Search Widget. Though do remember to download games that do not require Google Play Services.

Last year’s MatePad Pro featured a single 13MP main camera at the back and an 8MP selfie shooter. For the 12.6, Huawei packed the tablet with a 13MP + 8MP +ToF sensor triple rear camera setup, along with an 8MP front-facing shooter.

So how does the MatePad Pro 12.6’s cameras perform? Not bad for a tablet.

Daytime shots are of decent quality as expected, though low light photos aren’t the best. The image quality of the photos taken by the MatePad is on par with more affordable smartphones. Though this is as expected; after all, who takes photos using tablets anyway.

Meanwhile, the 8MP selfie camera isn’t the best for selfies as front-facing shots can look a bit lacking in detail. Again, taking selfies using a tablet isn’t really recommended so this should be fine for most users. Plus, the front camera does get the job done for video calls on Zoom or on Huawei’s MeeTime. 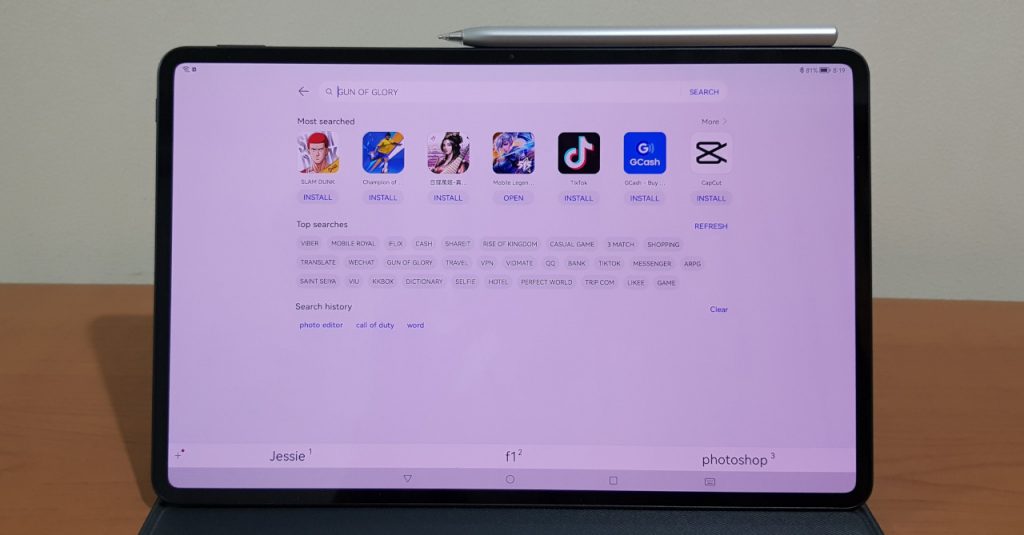 Given the tablet’s great gaming performance, it’s no surprise that the MatePad Pro 12.6 is an excellent device for everyday use. Even when switching between apps, the MatePad Pro was still fast and snappy, and at no point did the tablet slow down during our review period.

Another thing I mentioned above is the fact that the tablet runs on Harmony OS. In my experience though, the Harmony OS experience is similar to using Huawei EMUI Android devices such as the Mate 40 Pro. Though I did find that Harmony OS works better as a tablet thanks to its web browser.

Unlike with EMUI smartphones which can have problems with Google apps or Netflix, I simply used the web desktop versions of Netflix, YouTube, and other services. This worked much better in the tablet as the desktop versions of these services are already fully featured, meaning you won’t have to download these apps.

As for battery life, the MatePad Pro 12.6 does not disappoint. Even while using the two included attachments, I was able to use the tablet heavily for a day, with some charge to spare.

Buying the MatePad Pro 12.6 now until July 31 will give buyers a free M-Pencil 2nd generation and Smart Magnetic Keyboard. These two accessories are must-haves! 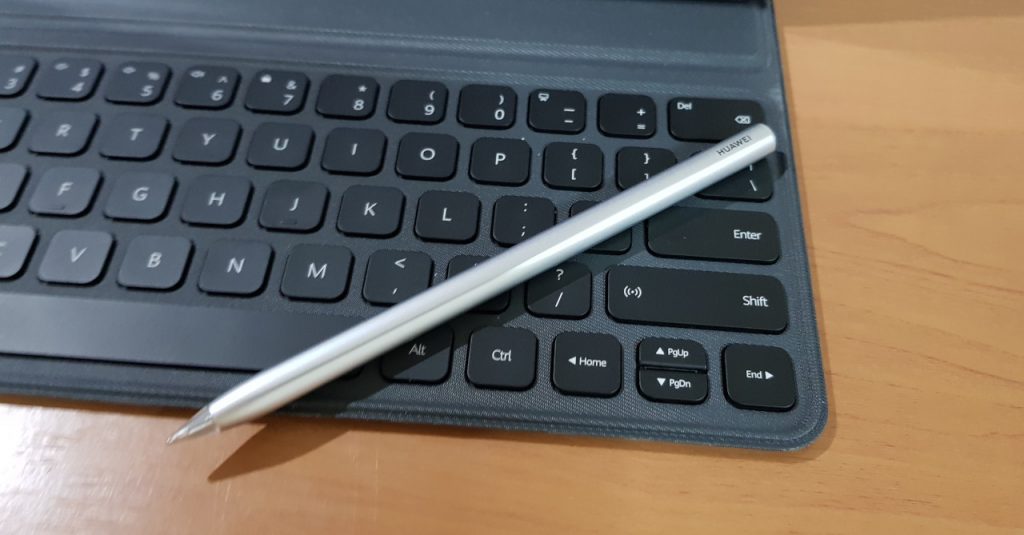 Firstly, the M-Pencil is a great addition for creative professionals as it allows them to draw and edit photos much more easily. While I would’ve liked more feedback from the M-pencil, it still gets the job done for note-taking and/or drawing.

The Smart Magnetic Keyboard is another accessory that adds so much to the MatePad Pro 12.6 in terms of usability. Not only does it function as a case and a stand, the keyboard is also a godsend for work-related tasks. As someone who writes articles, the keyboard accessory is a must-have as it allows the MatePad Pro 12.6 to be a capable laptop replacement for users who want a smaller and slimmer device. 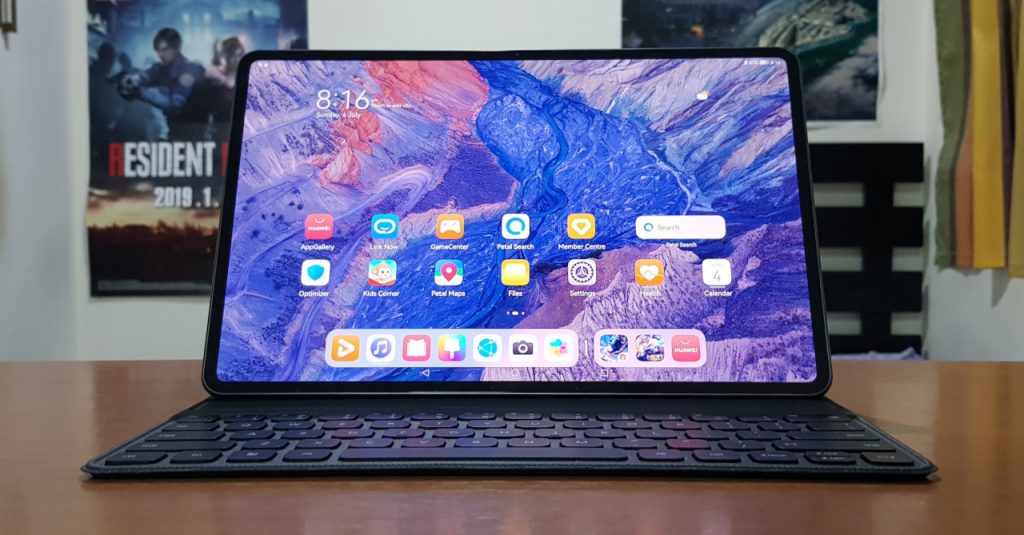 Thanks to its nice design, great performance, and excellent display, the MatePad Pro 12.6 is an impressive tablet, especially for users who love to binge-watch. Along with this, the new MatePad also comes with good battery life, meaning you likely won’t need a power bank when bringing this out and about.

As for usability, Harmony OS proves to be a surprisingly good operating system, and it still supports Android apps via the Petal Search Widget. Though of course, the tablet does not have Google services, so you should take that into account when buying the MatePad.