Beauty is in the eye of the commander. 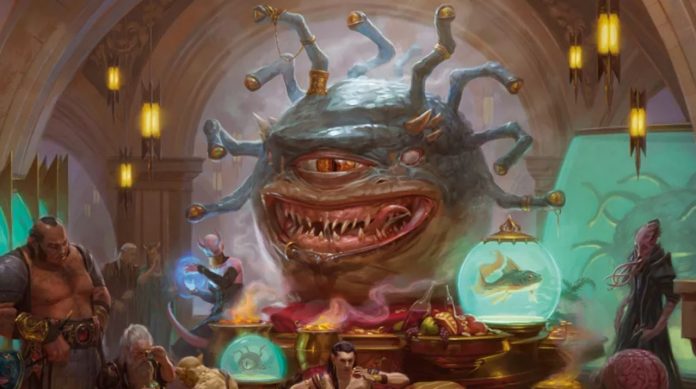 Starting today, Magic: The Gathering’s latest “Dungeons and Dragons” themed set – Adventures in the Forgotten Realms pre-release weekend is in full swing. During this time, players will have a taste of what’s to come and get a feel on how the expansion can shake up the game’s multiple formats. If you are familiar with the card game, you know that there are a lot of ways to enjoy MTG but arguably (and personally), the best one to come out in years is definitely the Elder Dragon Highlander (EDH) or Commander format, mainly because of its multiplayer and political aspect that the game naturally has. Adding to this, the format also promotes a more casual approach that is similar to a boardgame. For me, I just get a kick out of making a deck out of a character that I like and since the game is considered an ‘eternal format’, the cards normally don’t get rotated out.

For this article, I will just mention set expansion cards and approaching it on a more casual standpoint – possibly disregarding price and power levels. I am aware that Wizards of the Coast released 4 separate commander decks that mainly focuses on the new mechanics. Though the commanders there are awesome in their own right, those pre-constructed decks are pretty much self-made with minimal tweaking involved. If you are curious on all the new cards the set has to offer, check out this link.

So without further ado, here we go: 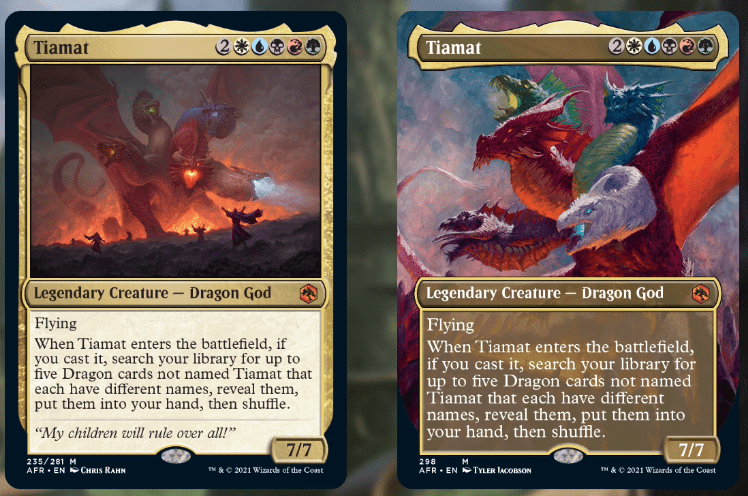 For a tribal build, you can’t go wrong with Tiamat. A 7 to cast 7/7 flier is reasonable enough with the potential of drawing his buddies along the way. Though for a five-colored Legendary creature, I’d still prefer using The Ur-Dragon because he has more utility at the expense of having a higher mana cost. Tiamat still comes as a very close second though. 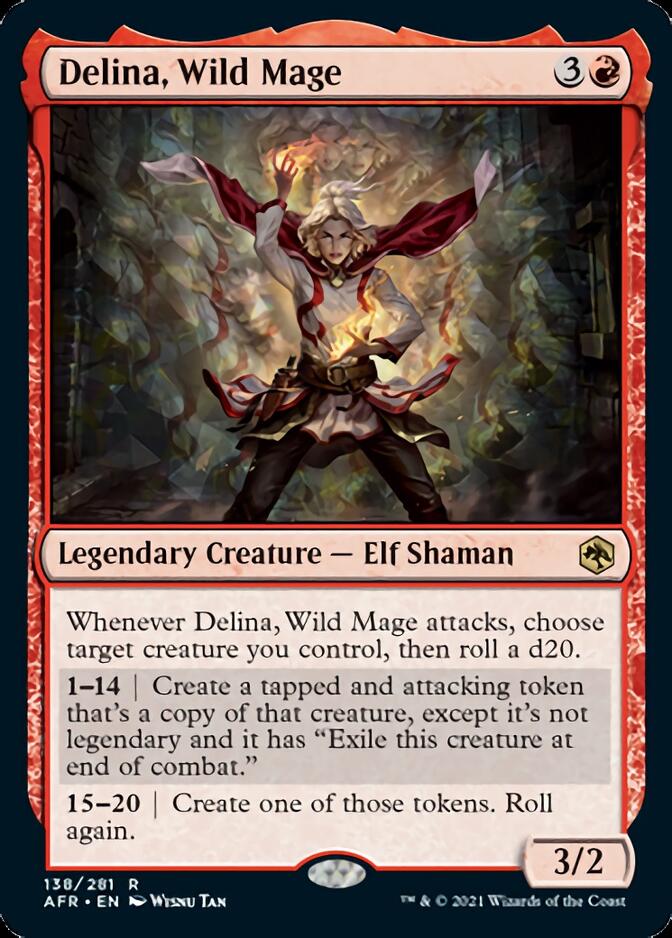 For those who played Baldur’s Gate, one of the classes there called the ‘Wild Mage’ is known for doing some serious shenanigans by capitalizing the RNG mechanic of the game. In similar fashion, for 4 mana, this 3/2 Red Elf is all about making some surprise board states, ideally during your attack step. On a bad roll, the least it could do is copy of a target creature you control (tapped and attacking). Rolling a 15 or higher lets you do it all over again! In a good turn, this could effectively do lethal in some unsuspecting opponent. 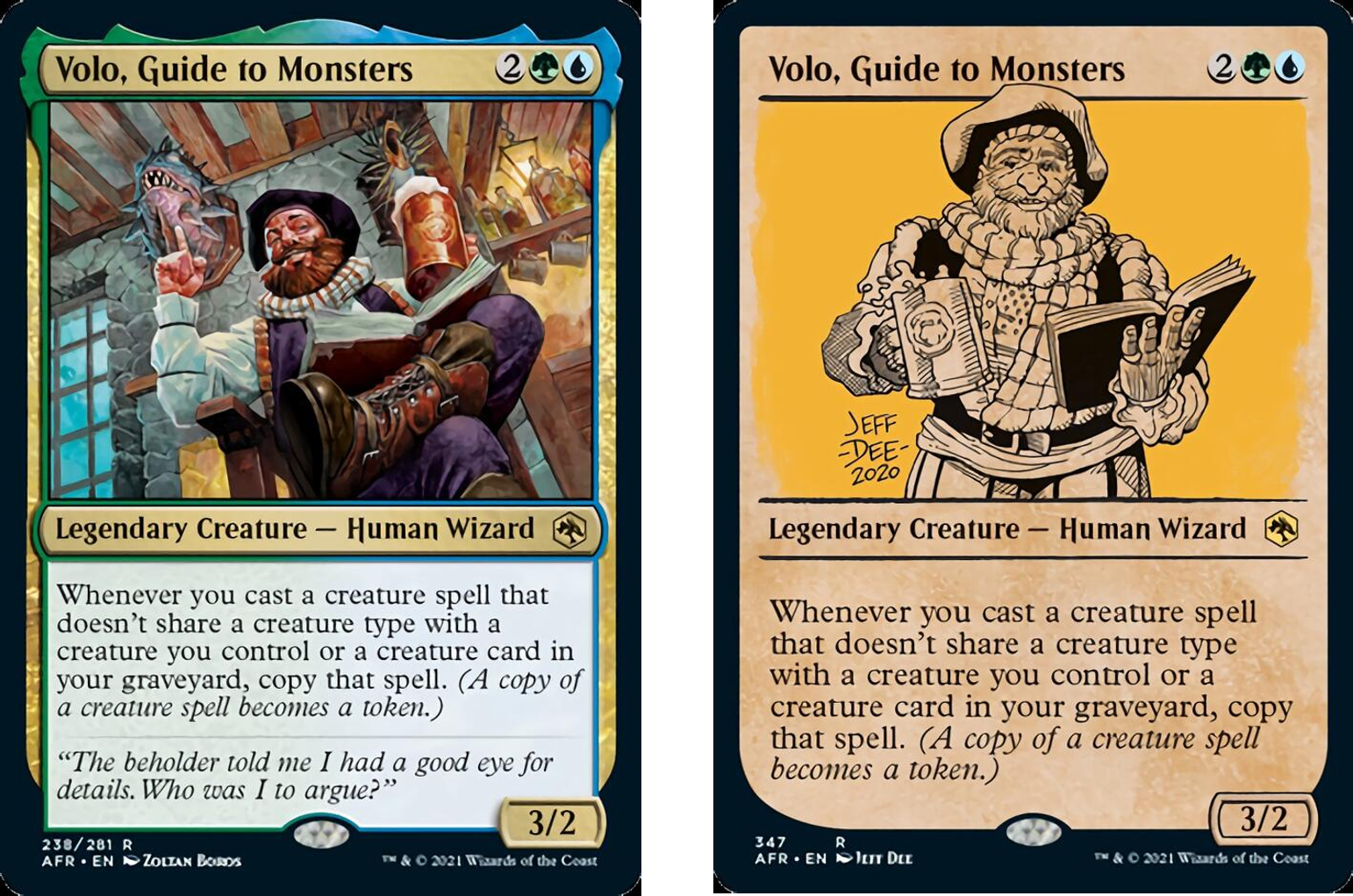 Speaking of making copies of monsters in the board, I believe with that a varied creature-type deck, Volo, Guide to Monsters does a better job in churning out those tokens on the board. Not only do you get to keep that creature in the battlefield, the fact that you don’t need to roll anything is a plus. I know that Simic is a very popular faction to play because of its inherent ramp and draw traits (not to mention putting some beefy creatures in green) so I’m sure fans of the colors will definitely churn up some interesting builds using this commander. 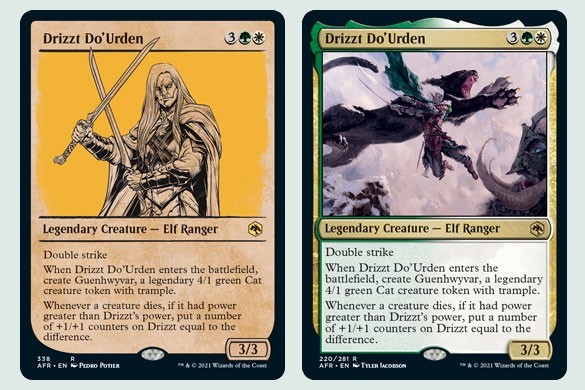 Arguably the most popular Dungeons and Dragons character, this 3/3 Selesnya-colored Dark Elf from Menzoberranzan is accurately staying true to his lore – first is having double-strike which relays back to his dual-scimitar weilding ways (Icingdeath and Twinkle FTW!). Secondly Guenhwyvar, his best buddy from the Astral Plane comes out the moment Drizzt arrives on the battlefield. Again sticking to the fluff, anytime a creature dies, if its power is greater than Drizzt, he gets to have +1/+1 counters equal to the difference. Why hello there, PHYREXIAN DREADNAUGHT! 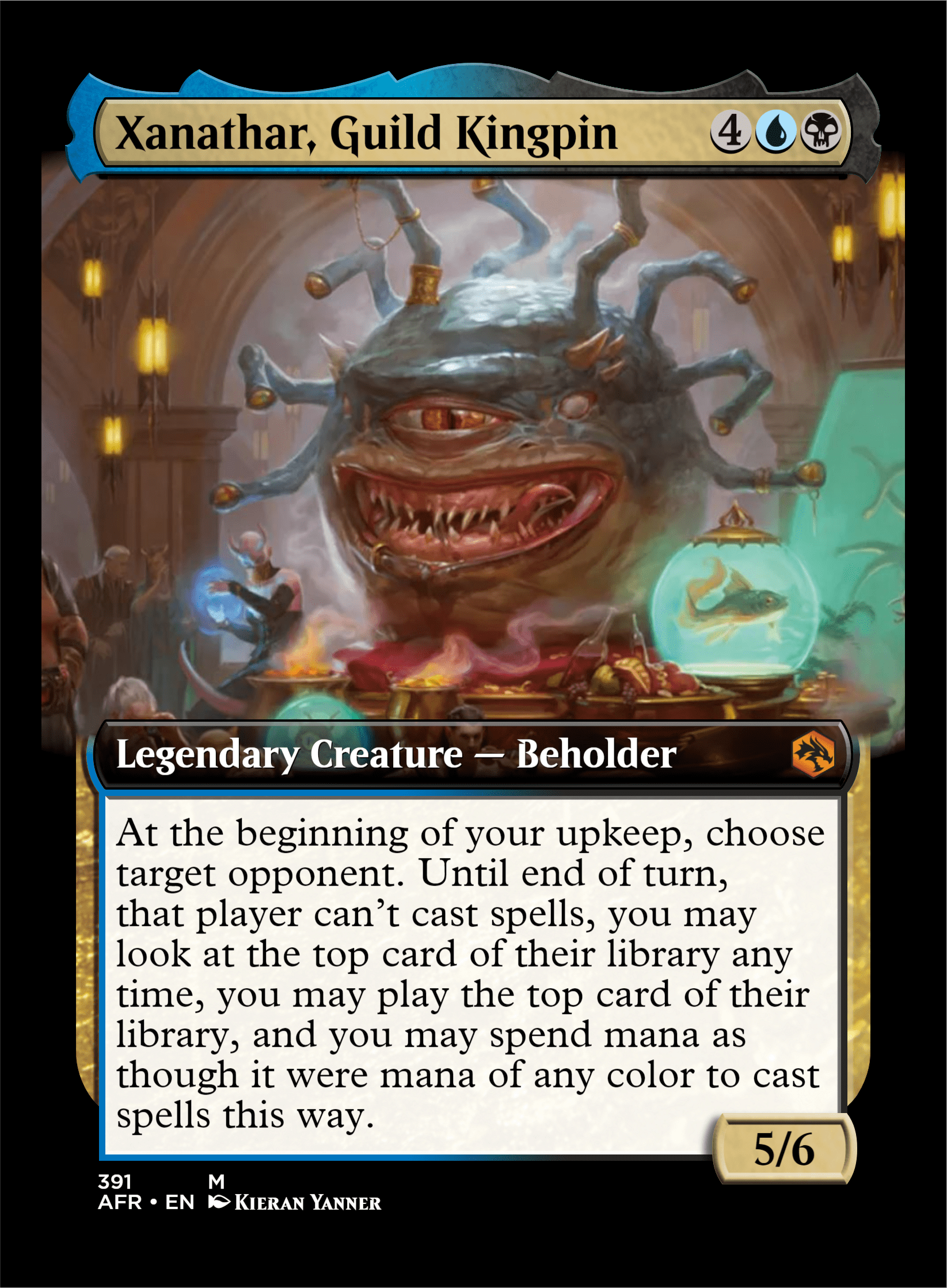 Oh boy, what’s not to love about this Dimir 5/6 Beholder. When cast at the right time, if it gets to live during your next upkeep step this creature effectively makes the target opponent your own personal toolbox, at the same time pacifying him through your whole turn. Like they say, beauty is in the eye of the Beholder. 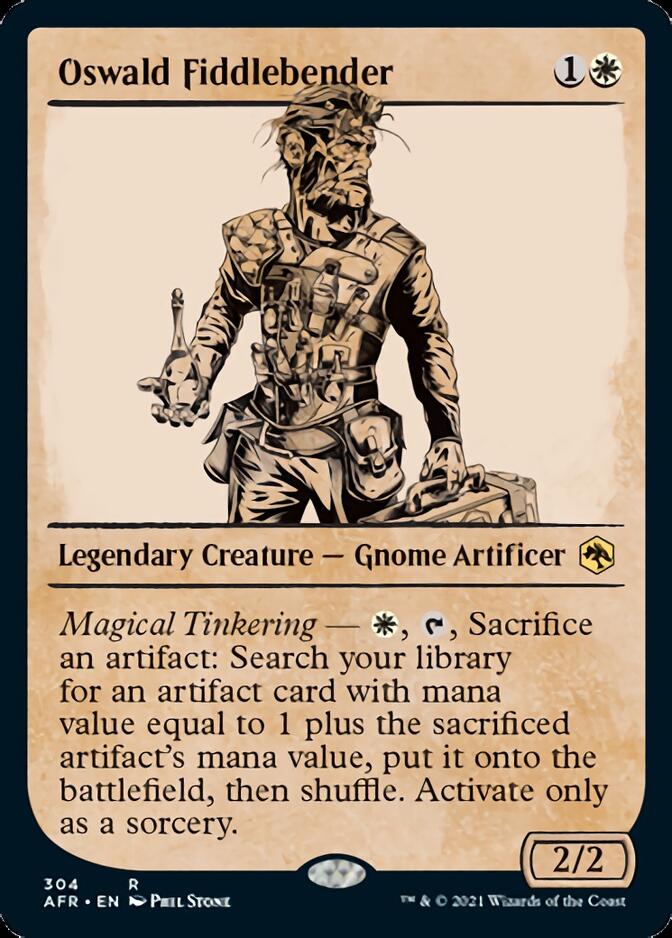 For those who love them artifacts, here’s its own of version Birthing Pod on a stick. Very reasonably costed at 2, this 2/2 Gnome Artificer can search your deck for an artifact that’s equal to 1 plus the artifact you just sacked. With the right build, you can tutor and put into play just about any artifact you want. Be it a stax or an artifact creature-focused deck, Oswald Fiddlebender is definitely one of the best legendary creaturess to come out of this set because of his unique ability. 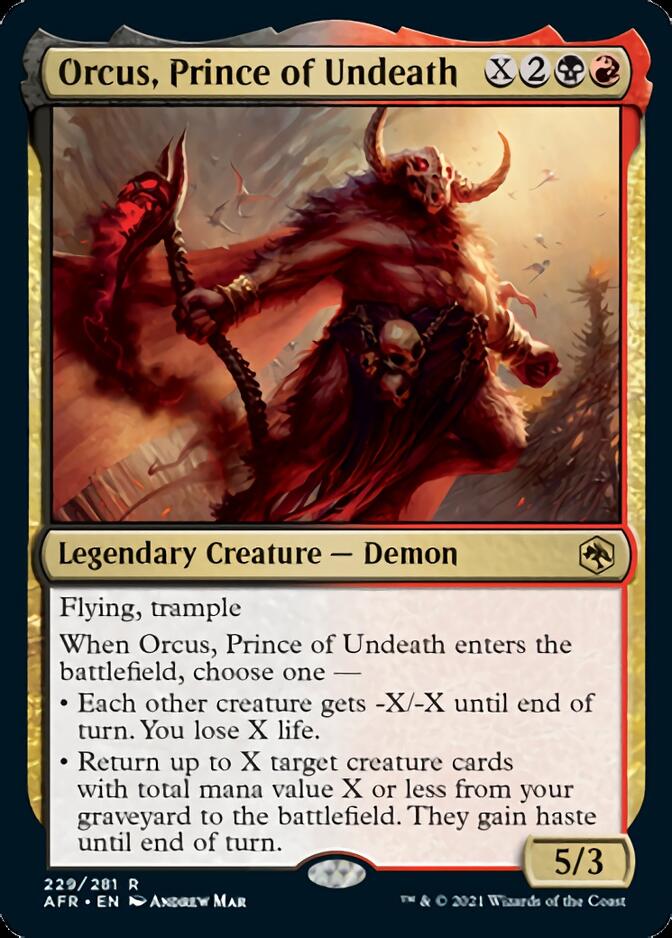 Okay I will admit, I am a bit bias with anything related to Rakdos but honestly Orcus, Prince of Undeath really is worth every bit of mana (and potentially, your life) you give to it.

Other than the fact that its a reasonably costed 5/3 flying-trampler, you can dump an additional X to his 4cc. Depending on the situation it can either be a one-sided board wipe or a surprise hasty reanimation from your graveyard. The versatility alone, with the right timing can win you games. 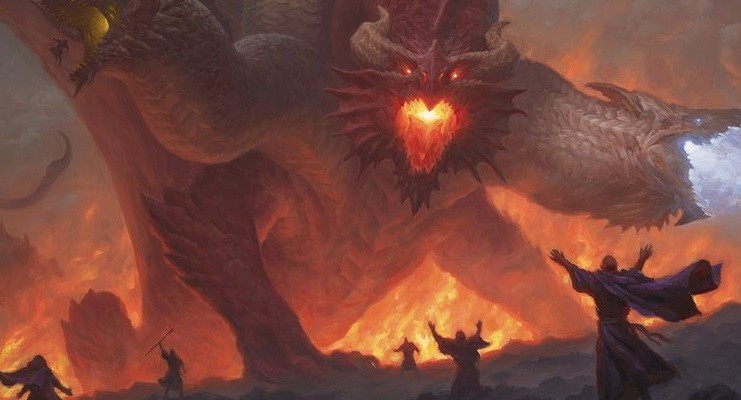 What do you guys think? Do you have any favorite legendary characters from the set that is worthy to be an EDH commander? Let us know what you think!

For those who prefer to play and collect the physical versions of the cards, especially those blingy foil-stamped PR cards, pre-release events will happen at your friendly local game stores starting today, July 16 (store locator here).

Dungeons and Dragons: Adventures in the Forgotten Realms will launch officially on July 23.