The Apex predator from Atlantis has swam her way to the top! 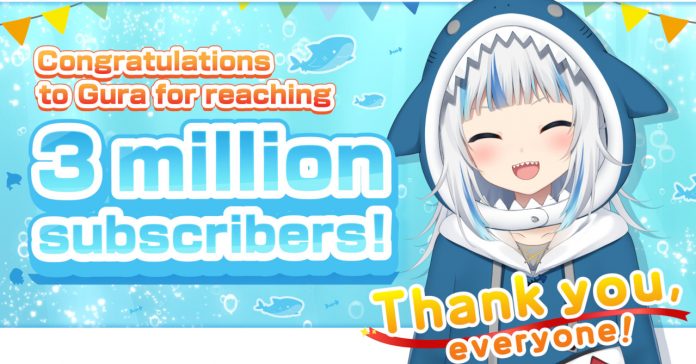 Hololive Vtuber Gawr Gura has reached another milestone, as her channel finally has 3 million subscribers, making her the most subscribed Virtual YouTuber on Youtube.

At the time of writing, Gura has now surpassed Kizuna Ai who currently has 2.97 million subscribers on her A.I. Channel, meaning Gura is also officially the first Vtuber to reach the 3 million milestone on YouTube.

Since her debut in September 2020, Gura’s channel has quickly reached the 1 million subscribers milestone, and by January 2021, she has reached 2 million subscribers. This not only makes her the most subscribed VTuber, but also the fastest in growth.

While Gura has lots of quick-thinking moments, she’s also renowned for here questionable math skills. If you haven’t seen her streams yet, this clip of her with fellow Hololive member, Takanashi Kiara, is something that you can start with:

Gawr Gura is part of Hololive English/HoloEN’a first-generation of Vtubers. Their group is referred to as HoloMyth and it consists of Mori Calliope, Takanashi Kiara, Ninomae Ina’nis, and Watson Amelia. All members have over 1 million subscribers on their own channel.