Dragon Quest The Adventure of Dai: A Hero’s Bonds is available now on Android and iOS

Players Can Receive Log-in Bonuses Including 9,000 Gems to be used for Treasure Hunts. 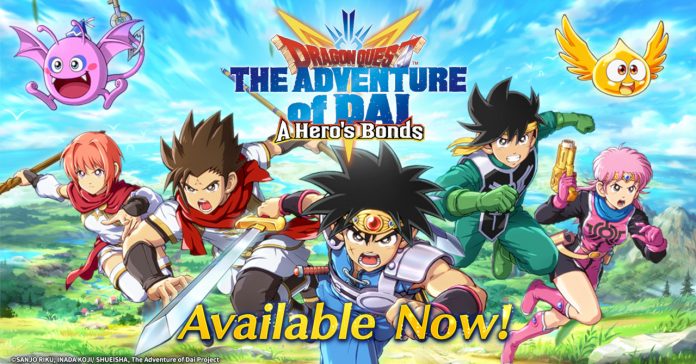 With the game now available on mobile devices, here’s a quick rundown of what content to expect:

Not familiar with the game? The Adventure of Dai is described as:

“In DRAGON QUEST The Adventure of Dai: A Hero’s Bonds, players will experience the epic story of the anime DRAGON QUEST The Adventure of Dai. Cooperative play will be available for up to three players to work together and strategize to take down the Dark Army on a three-lane battlefield. Players will need to observe their opponents moves and attacks to respond with the right counter-attack, dodge, or spell. Each character will have different roles, abilities, and special skills in a match. Characters, attacks, weapons, and equipment can also be upgraded and customized, providing for strategic RPG elements on top of in addition to the exciting action.”