Here is the PlayStation Plus free games lineup for September 2021

PS Plus subscribers will get Overcooked, Hitman 2, and Predator: Hunting Grounds for free. 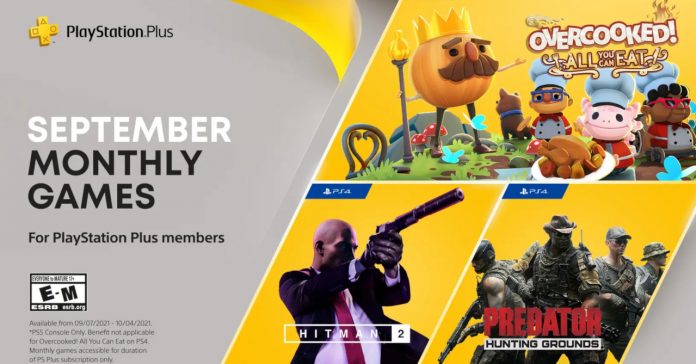 PlayStation has finally revealed the PlayStation Plus free games lineup for September 2021, and it includes Overcooked! All You Can Eat, Predator: Hunting Grounds, and Hitman 2. If you ask us, this is a noticeably stronger lineup compared to last month’s free games on PS Plus.

First up, we have Overcooked! All You Can Eat. This game is a compilation of Overcooked 1 and 2, as well as all of the additional content for both games. In total, All You Can Eat features hundreds of levels where players can enjoy chaotic cooking in local and online co-op. The package features campaign, survival, practice, and assist mode (a new feature in All You Can Eat).

Take note though, only the PS5 version of Overcooked will be free. If you have a PS4, you can claim the game via the PlayStation app and/or website, though you’ll need a PS5 to play the game.

Next up is Predator: Hunting Grounds, an asymmetrical multiplayer shooter released last year. How it works is that a team of four players must complete various objectives and exfiltrate, all while facing off against AI-controlled enemies, as well as a powerful, player-controlled Predator. Think of it like Dead by Daylight, but more action-focused and set in the Predator universe.

Rounding out the PlayStation Plus September 2021 lineup is Hitman 2. In this game, players will control legendary hitman, Agent 47, as he assassinates in multiple targets in large sandbox levels. Along with the main campaign missions, Hitman 2 also includes other game modes, including the Sniper Assassin mode.

For more info on the PS Plus lineup for the month, visit the PlayStation Blog.