Now this is a pretty gaming machine! 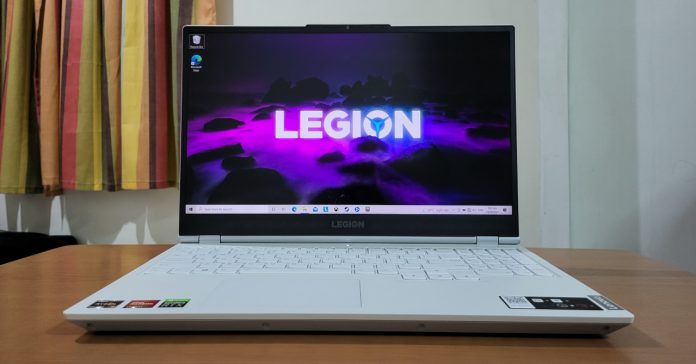 While we’ve reviewed various Lenovo laptops over the past years, we recently got our hands on a new Legion laptop that might be the best-looking one yet — the Legion 5 in Stingray White. This new Legion gaming notebook just launched in the Philippines, and while its chassis is pretty much the same as Legion 5 laptops in the recent years, it comes in an eye-catching white color that makes it stand out while keeping the sleek look that Legion has become known for. 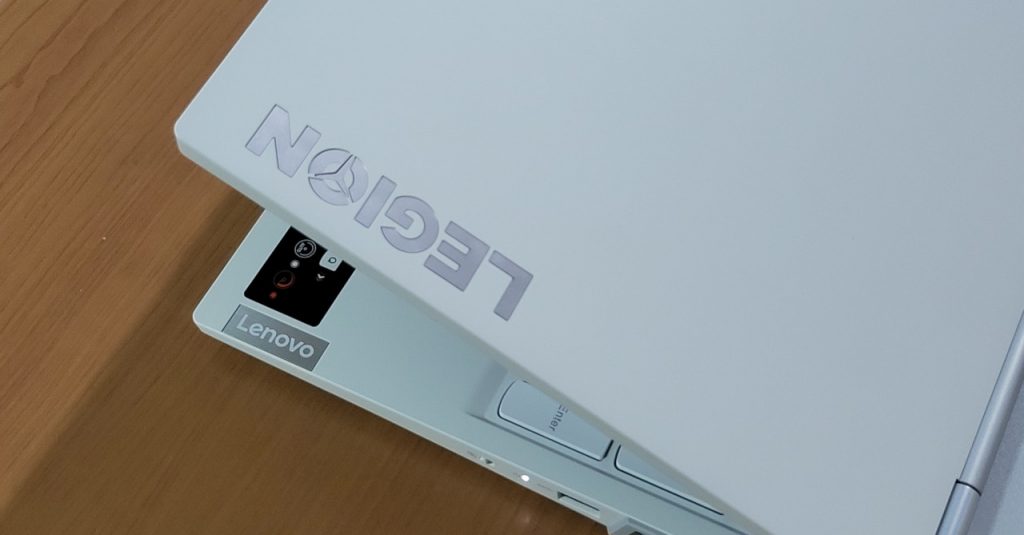 Aside from its good looks, the new Legion 5 is also quite a powerful gaming machine based on its specs. Not only does it pack the latest AMD Ryzen 7 5800H CPU, it also has an NVIDIA RTX 3060 graphics card and 16GB of RAM. On top of these, the laptop has a 15.6″ display with a 165Hz refresh rate.

Visually, the Legion 5 Stingray White is eye-catching, plus it should be a capable enough for even the latest triple-A games on paper. But does the new Legion 5 deliver in actual use? Find out here in our full review! 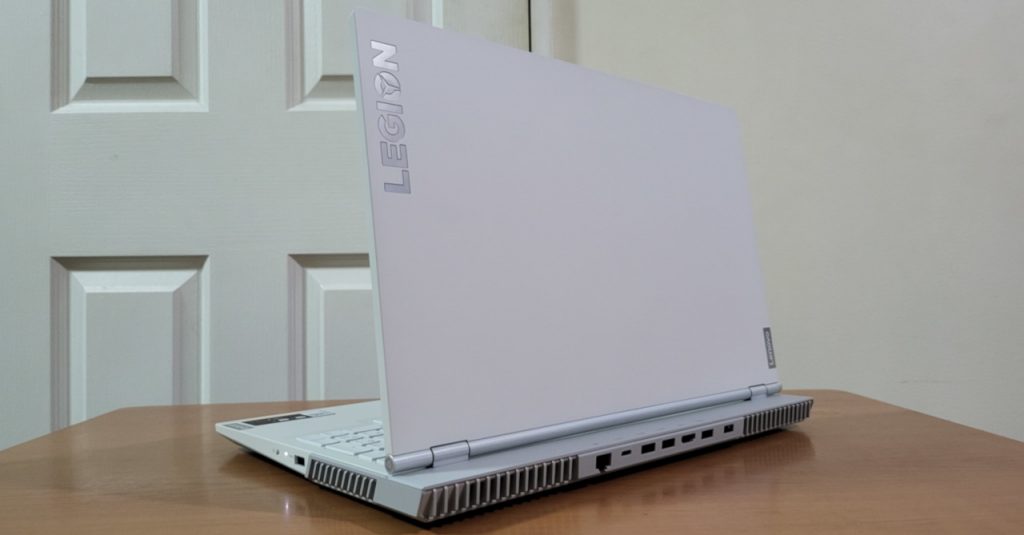 Before we explore performance, let’s first take a closer look at the laptop’s design. As I mentioned, the Legion 5 comes in an primarily white colorway, and it is complemented by gray accents. Aside from these, the only other notable design element is the Legion logo at the top left of the cover, as well as the even smaller Lenovo logo on the lower right. 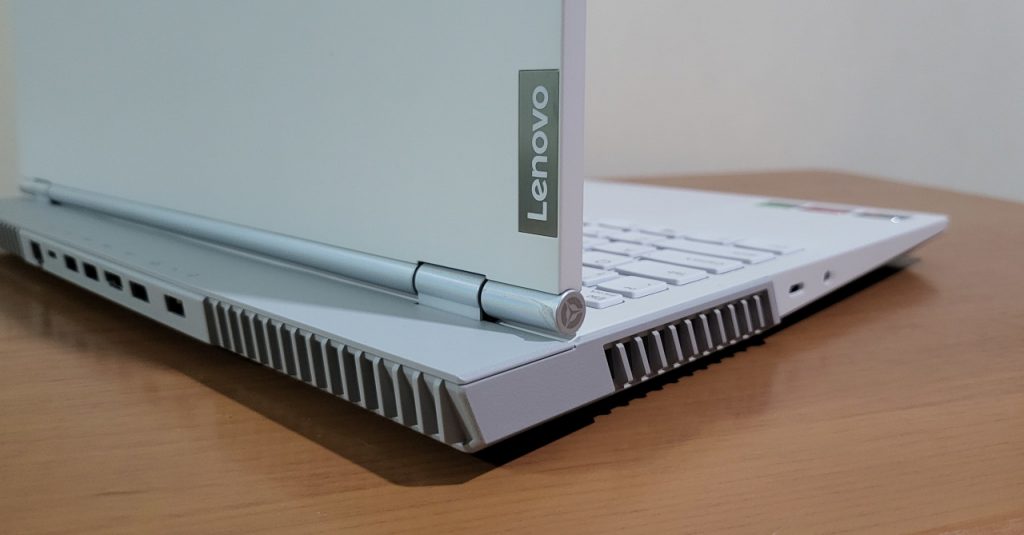 While it may not have much in the way of design flourishes, the Legion 5 Stingray White will definitely catch the attention of people, much more so than the previous Legion 5 models we saw which were in Black. While making it white may not seem like much of a change, in person, the Stingray White Legion 5 is definitely a step above previous models in the looks department (at least in my eyes). Plus, even if it’s a more eye-catching, the Legion 5 is still sleek enough that it won’t look too out of place in an office. 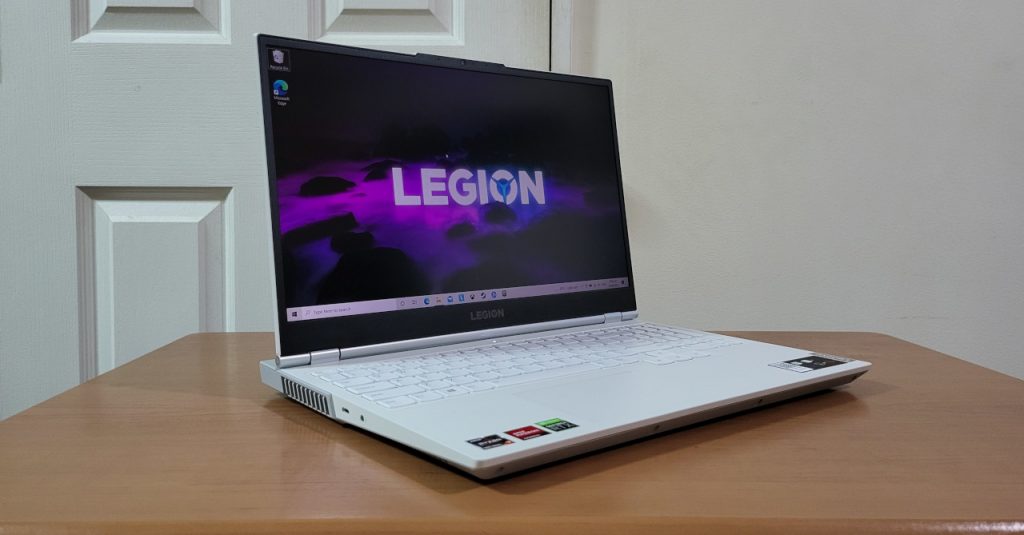 When you open up the laptop, you’ll see that its keyboard is also white, though the monitor borders are black (which is pretty much the standard even in other white-colored notebooks). Another interesting thing design-wise is the webcam placement as it is placed on a raised part of the top border.

As for I/O, the Legion 5 has a USB Type-A port on the right, as well as a physical webcam switch (a nice touch for privacy). And on the left, there’s a USB Type-C port and a 3.5mm headphone/mic combo jack.

The rest of the I/O can be found in the back, consisting of a power connector, another USB Type-C, one HDMI 2.1 port, three USB Type-A ports, and an Ethernet (RJ-45) port. Aside from having a comprehensive amount of I/O, the back placement for the laptop’s ports is a nice touch as it makes it easier to manage cables. The rear I/O is also clearly marked from the top, so you won’t have to turn the laptop around to plug in your devices. 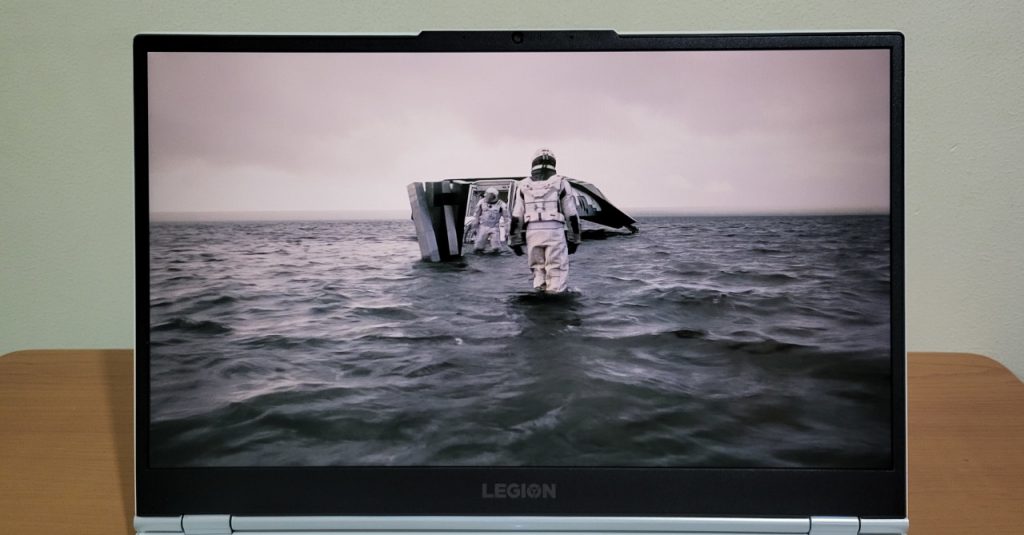 The Legion 5 has a 15.6-inch IPS display with a Full HD (1080p) resolution. For binge-watching films and TV shows, the laptop’s screen does the job well enough as its output is sharp and detailed. And while the colors are ever so slightly muted, the display has a fairly wide viewing angle thanks to the IPS panel. Though you’ll need to crank up the brightness if you watch movies/shows in a well-lit room as the display is fairly dim even when set to 50% brightness. 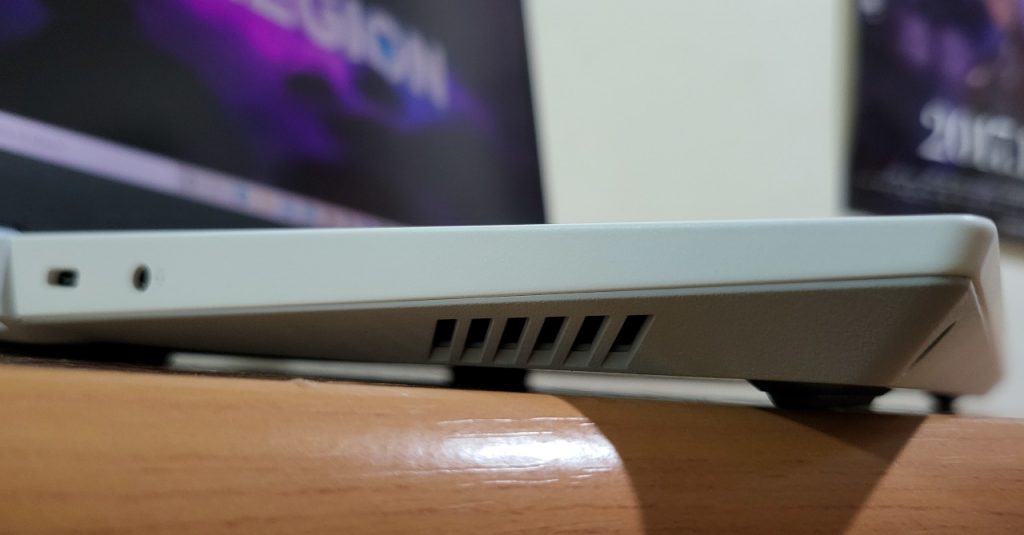 For its audio, the Legion 5 has built-in speakers with decent sound quality, though it does share the same trait as other Legion laptops I’ve tried in that the speakers don’t get that loud. If you’re watching in a quiet room, you can make do with the speakers, but I recommend using wired or wireless headphones/speakers for a better experience, especially when gaming as the fans can drown the sound of the built-in speakers. 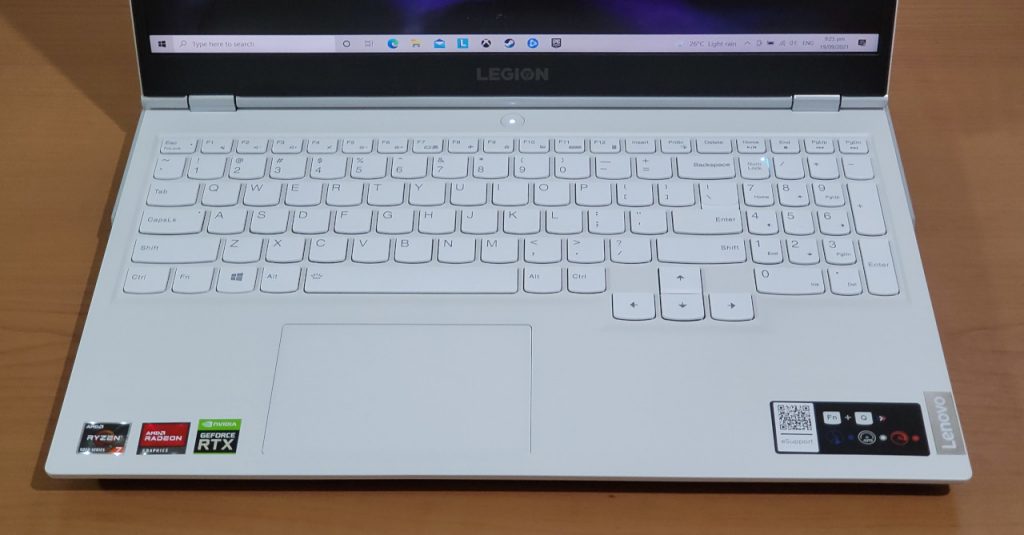 Even though the Legion 5 is not too big for a 15.6-inch laptop, it still packs a full-size blue LED backlit keyboard. In my time with the Legion 5, I found the keyboard to have a decent tactile feel which was great for both typing and gaming. Though what I liked about it more is the comfortable size and distance of the keys, with the exception being the number pad. This laptop’s numpad is a bit small, though this wasn’t as issue for me as I don’t really use the numpad all that much. 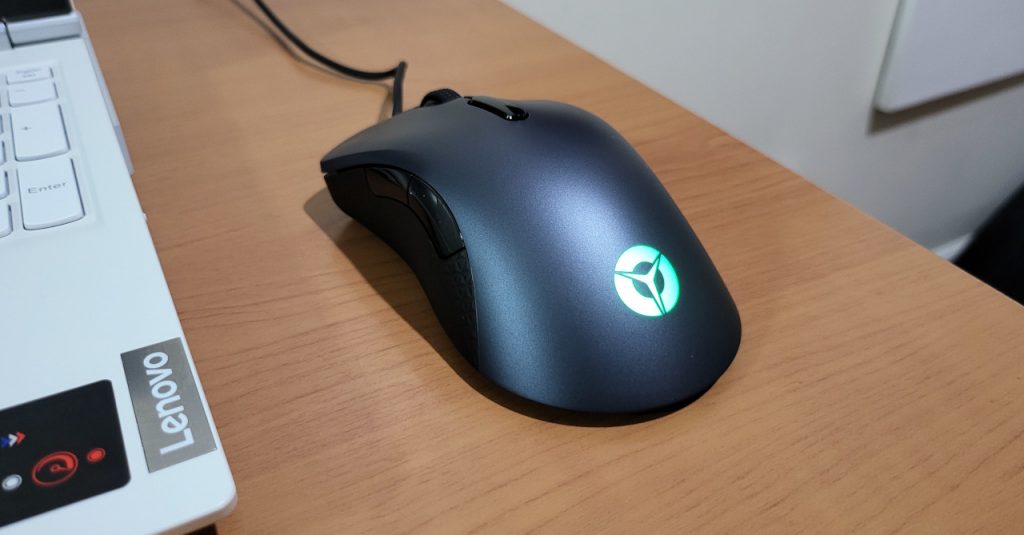 Another thing I appreciate about Legion laptops is that most (if not all) of them come with a gaming mouse inside the box. For this laptop, Lenovo included a Legion M300 RGB Gaming Mouse, which is a quality gaming mouse which should satisfy most users. 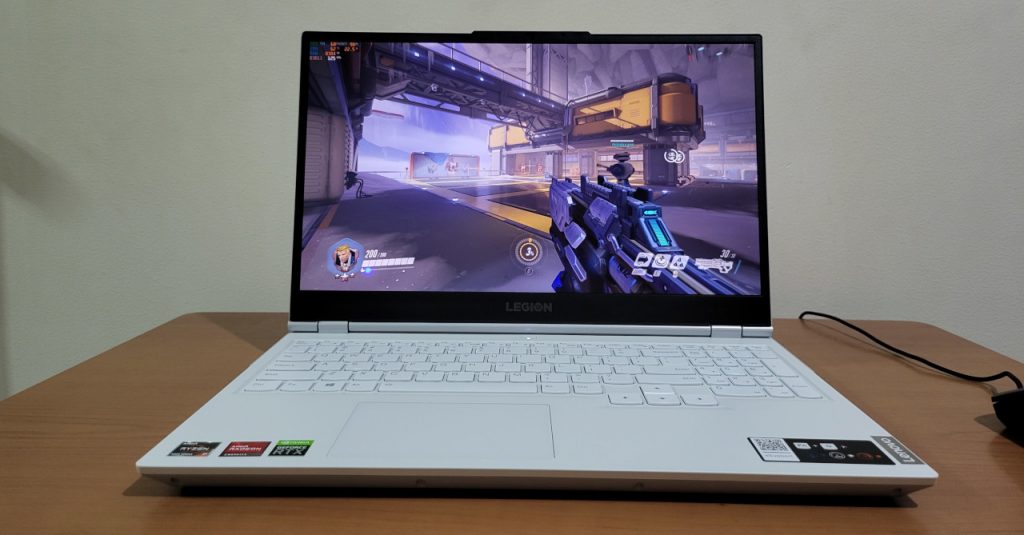 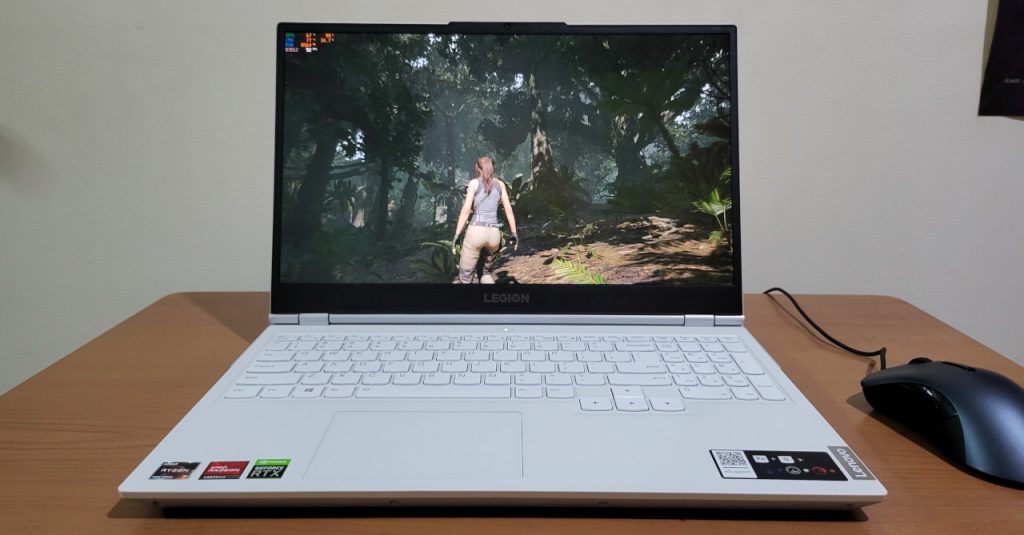 As expected, the Legion 5 Stingray White performed well for 1080p gaming, both for esports titles and triple-A games. For example, Dota 2 and Overwatch ran at well above 100FPS on average at the highest settings; this is made even better by the fact that the Legion 5i has a 165Hz refresh rate with G-Sync, making for a much smoother and a tear-free gaming experience.

For triple-A games meanwhile, the Legion 5 was also able to run today’s popular AAA titles at High graphics settings, all while having an average FPS of over 60. The laptop even has enough power to run these games with RTX on, though I’d recommend not setting RTX to max and turning DLSS on if the game supports it.

Here’s a rundown of the Legion 5’s performance in select esports and AAA games:

Meanwhile, here are the synthetic benchmark scores of the new Legion 5: 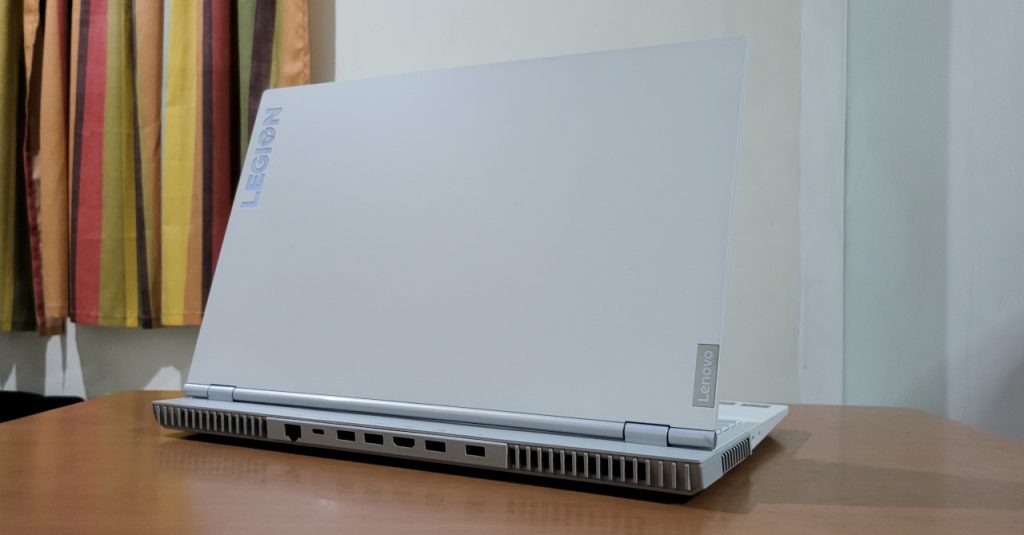 Aside from great gaming performance, the Legion 5 Stingray White is also a reliable partner for productivity. Whether you use it for typical office work or if you also run photo/video editing apps, the Legion 5 has enough power for your needs. Of course, this laptop’s performance isn’t workstation level, but for most users, the Legion 5 should prove reliable.

Regarding battery life, the Legion 5 is just fine. After running a 2 and 1/2 hour movie at 50% brightness and volume, the laptop had 47% remaining. This means you should be able to use the Legion 5 for movies/browsing (not gaming of course) around 4-5 hours on battery power before plugging it in; not bad for a gaming laptop, but not the best. 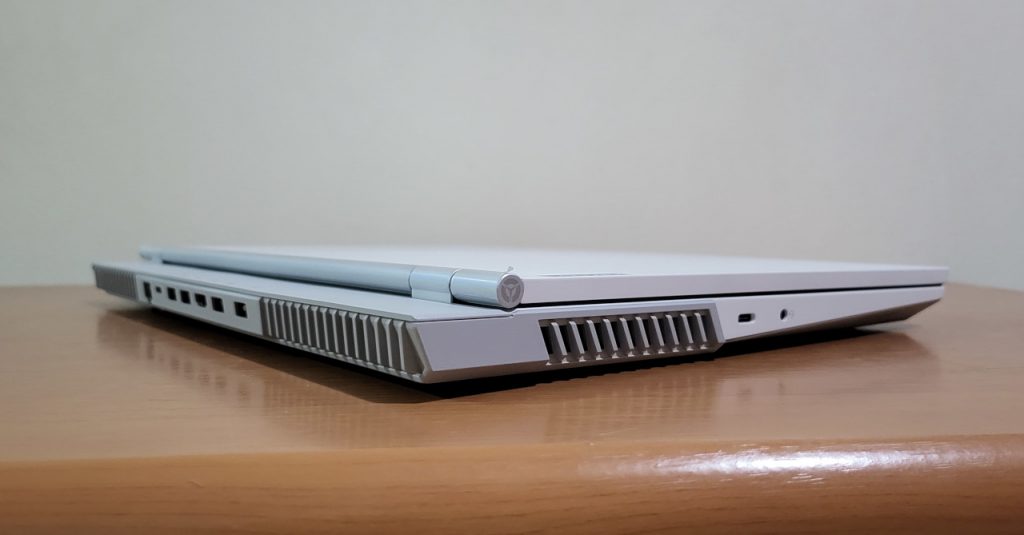 Finally, the Legion 5 is fairly heavy, and it even has a large power brick for its RTX 3060 GPU. This means it’s not the most portable laptop around, though it’s still a far cry from chonky gaming laptops from previous years. Though for me, it’s still fairly portable overall for a 15.6-inch laptop. 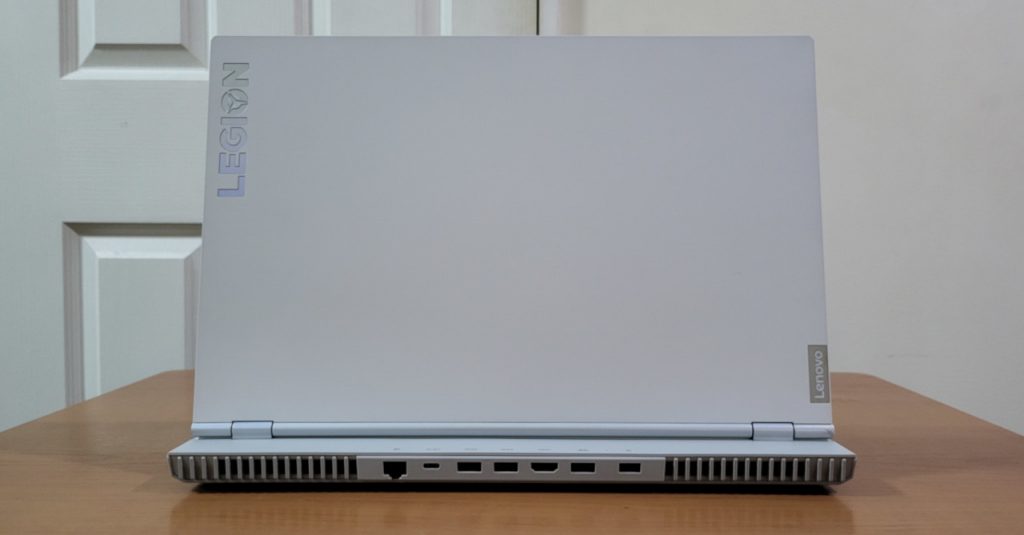 Thanks to its good looks, general reliability, and great gaming performance, the Legion 5 Stingray White is an excellent gaming laptop. While its battery life could be a bit better, it more than makes up for it with its overall performance and usability.

For its price tag of PHP 89,995, the Legion 5 is a bit on the expensive side at first glance. Though when you consider that it can run even AAA games at High graphics settings, this is overall a good deal for users on the lookout for a powerful gaming laptop that doesn’t cost over PHP 100k.