A nice ultrabook at an even nice price point! 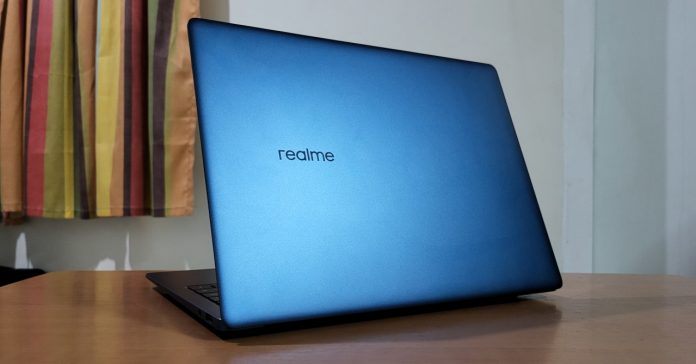 Last week, we shared our first impressions of the realme Book, realme’s first-ever laptop following the brand’s recent expansion outside of its signature smartphone lines. And in our impressions, we were already quite impressed with it as the laptop is powered by a new 11th gen Intel Core i5 processor — we expected the laptop to perform well for general use given that it’s a CPU that powers other notebooks we’ve tested before. Coupled with the realme Book’s premium design and unique 3:2 screen, this new laptop seems to have everything you would need in an ultraportable notebook. 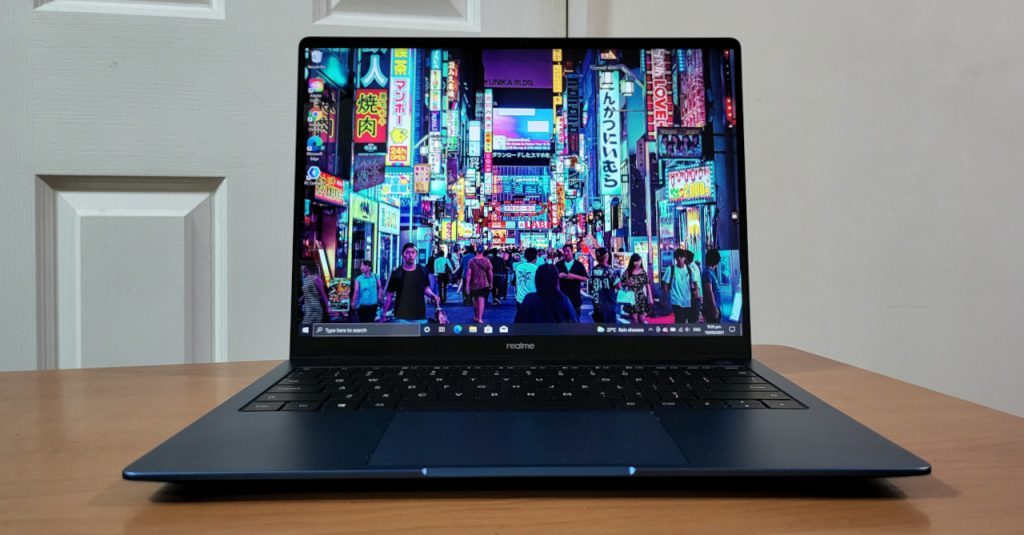 Of course, that’s mostly based on both our initial impressions. Now though, we’ve been able to test out the realme Book in a variety of use cases — from productivity to entertainment. So, does the new realme laptop offer a compelling overall package for its price point? Here’s our full review of the realme Book! 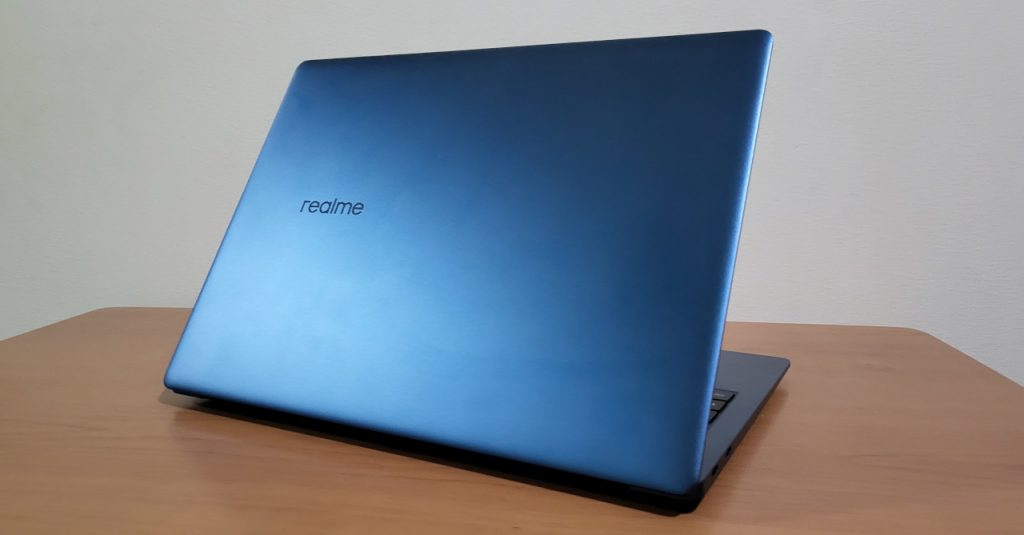 In pictures, the realme Book seems to have taken major inspirations from Apple’s MacBook. In person though, the realme Book manages to have an identity of its own, mostly thanks to its ‘Real Blue’ colorway which is both sleek and stylish. Though it looks a bit on the plain side at first glance, the realme Book’s low-profile design makes it a professional-looking notebook that will blend in nicely in an office setting. And if you do want a bit more pizzazz, you can decorate the cover with stickers. 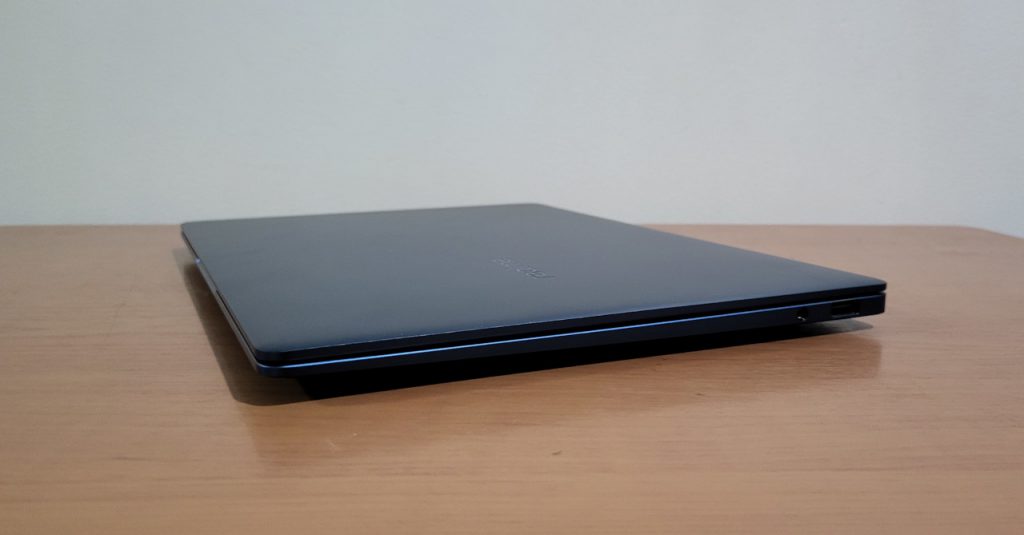 Aside from great looks, the realme Book is nice because of how slim and light it is. Thanks to its slim frame, it’s easy to put inside your backpack in case you need to use it while on-the-go. It’s also light enough that it won’t hurt your back or shoulders if you do need to lug it around with you for a meeting. 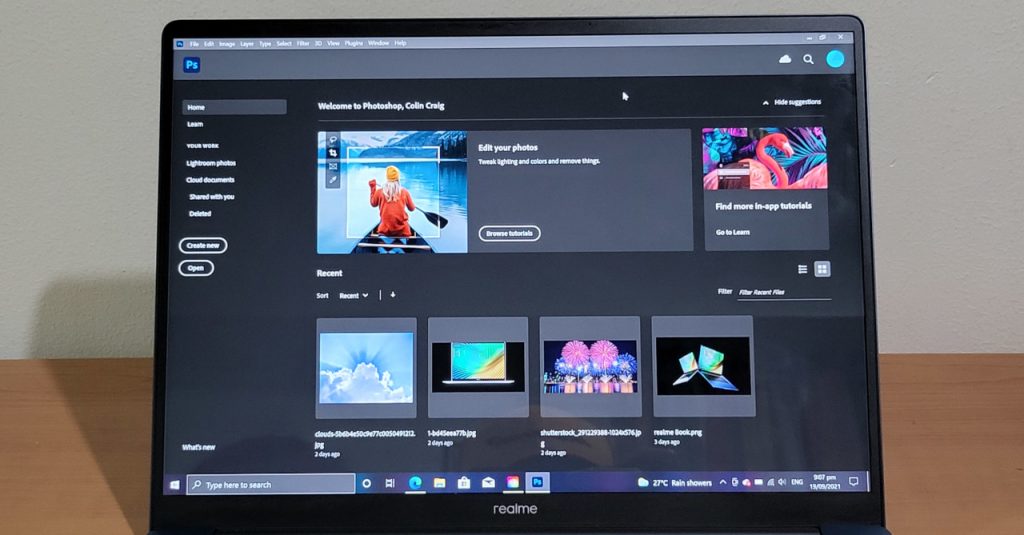 As for its display, the realme Book has as 14-inch IPS display complete with a 3:2 resolution. While this tall aspect ratio may seem unusual coming from a standard laptop, it’ll be hard to go back to a 16:9 display after using the realme Book. This is because the taller aspect ratio gives you more screen real estate, perfect for productivity. For instance, you can see more of your project in Photoshop, or you can open two Word documents side-by-side while still seeing both files clearly.

Moving on to I/O, the realme Book has a USB Type-A port, two USB Type-C ports (also used for charging), and a 3.5mm headphone/mic combo jack. While the laptop’s connectivity is better than other laptops which only have USB Type-C ports, we would’ve liked to see another USB Type-A port, or maybe an HDMI port and an SD card reader. This means you will need a dongle or two if you need to connected other devices. 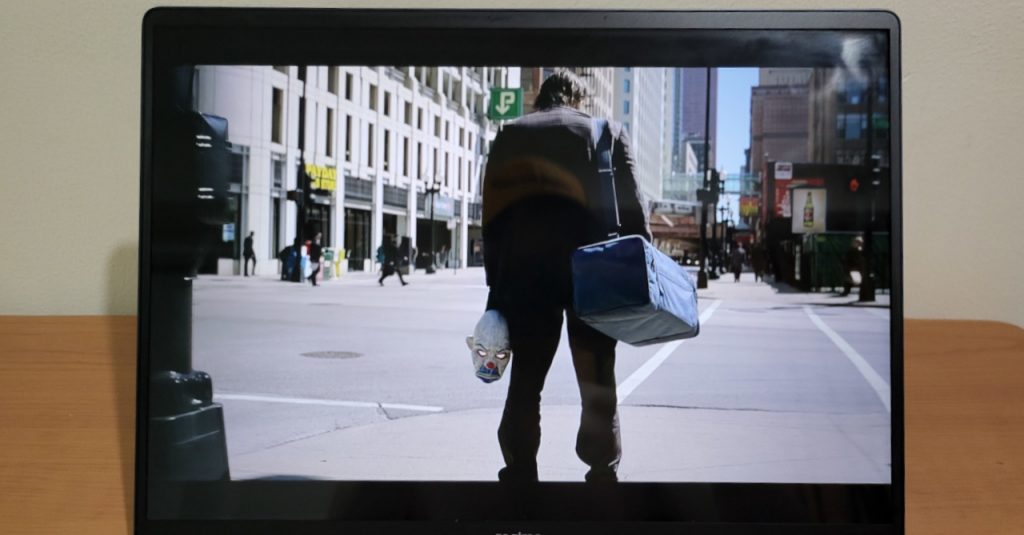 One thing to note though is that there will be letterboxing for most widescreen content given the tall 3:2 aspect ratio (most movies and shows won’t make use of the full screen). Personally, this wasn’t an issue, especially for 16:9 content, though this is something to consider for users that are avid binge-watchers. 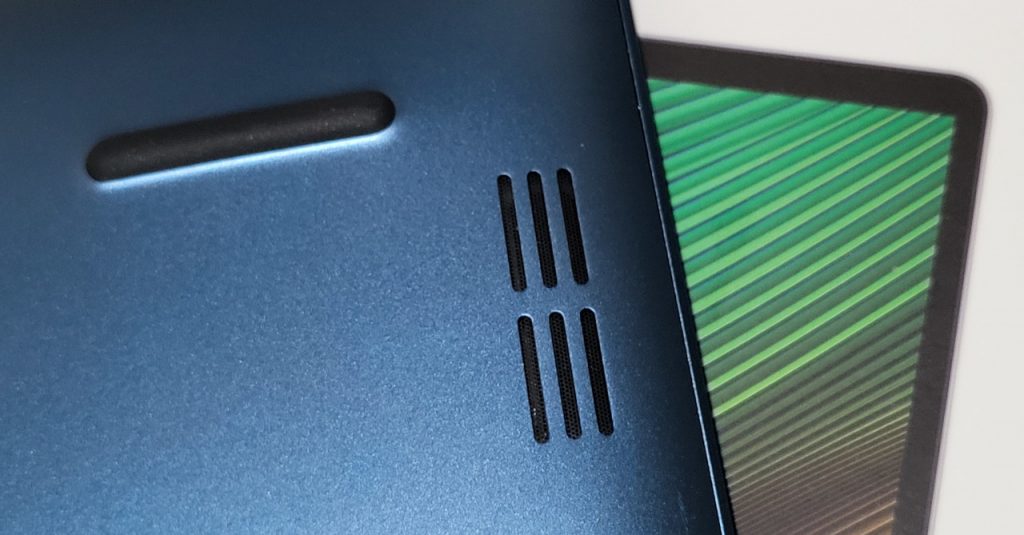 For audio, the realme Book has onboard stereo speakers that proved to be surprisingly loud. Usually, I have low expectations of speakers in ultrabooks as most of them don’t get that loud. The realme Book was different though as its built-in speakers can get quite loud, all while retaining decent audio quality. If you’re alone in a fairly quite room, you can watch movies or listen to music using the onboard speakers and have a nice time. Of course, for the best viewing/listening experience, external speakers or headphones are recommended. 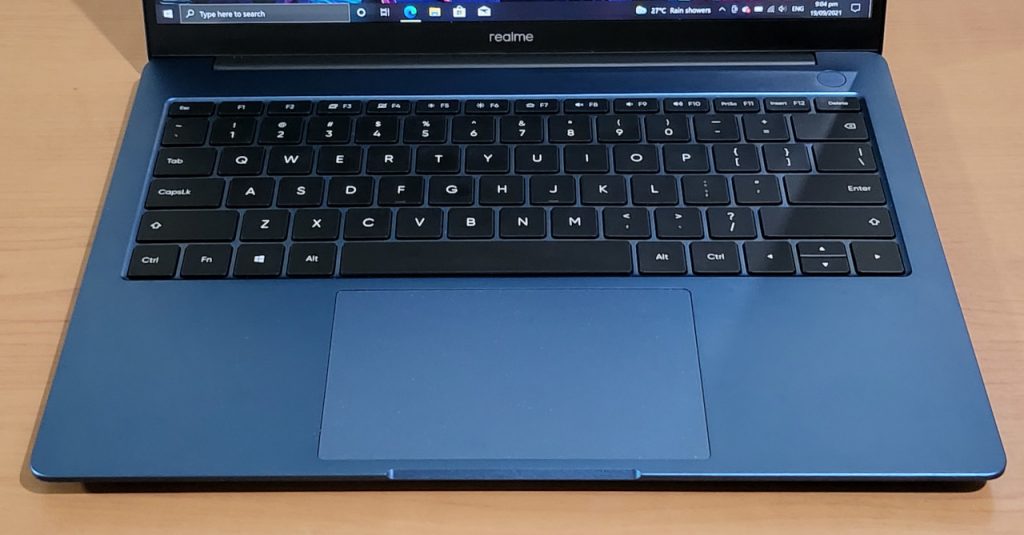 Aside from the keyboard, I also liked the laptop’s trackpad which is, again, much bigger than in other ultrabooks. While I still prefer using a mouse, if I did get stuck using a trackpad, I wouldn’t mind it so much on the realme Book.

The realme Book is not a gaming laptop, so the latest triple-A games are pretty much out of the question on this notebook. Though we still did test it out on some esports titles and other less hardware intensive games to see how the laptop’s Intel Core i5 CPU would hold up. 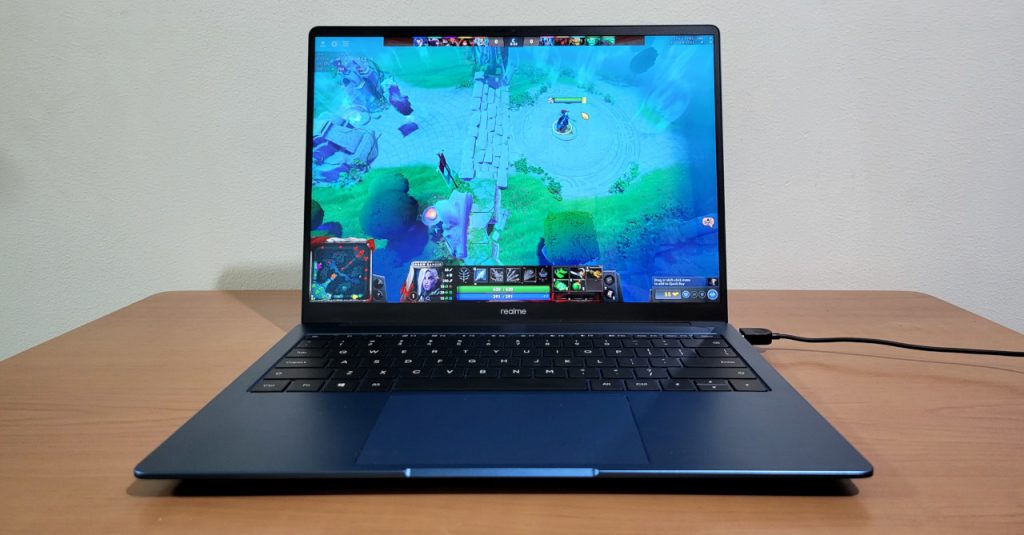 First up, we tried out Dota 2. On the medium graphics setting, Dota 2 ran with an average framerate of 75 FPS; not bad at all for an ultrabook. This means if you play a bit of Dota or other MOBAs, the realme Book will run them fine, provided you don’t play for hours on end (as heat may become an issue). 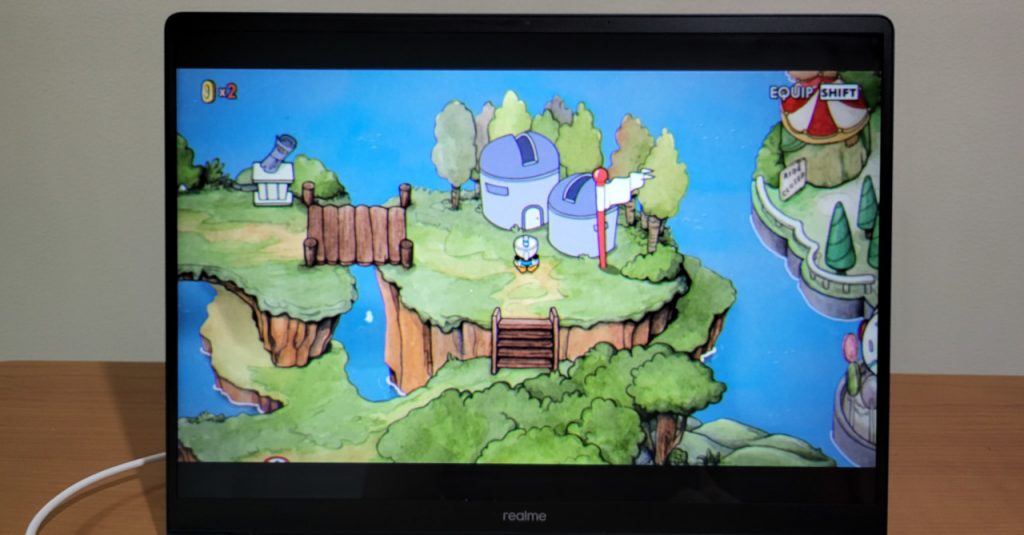 Next, we tried other games such as Cuphead and other indie games. For these titles, the realme Book performed well, meaning the realme Book is also capable enough to run most indie titles.

Now, here are the synthetic benchmark scores of the realme Book:

The realme laptop scored 8183 on 3DMark Night Raid (a test for integrated GPU-equipped PCs/laptops), and 4379on PCMark 10. This result is in line with ultrabooks in this segment. 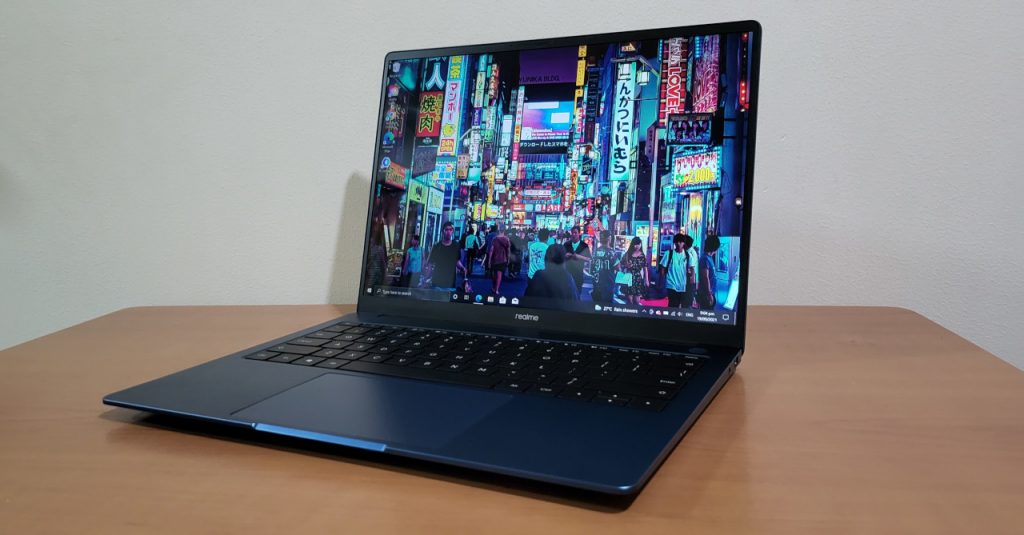 As the laptop performed well for gaming, we weren’t surprised to find out that it was also great for everyday use. If you need a laptop for work or for school that can handle browsing, online meetings, office apps, and some light photo/video editing, the realme Book is a great match. Of course, it won’t be as powerful as a gaming or workstation laptop for heavier editing/content creation, but for general users, the realme Book won’t disappoint. 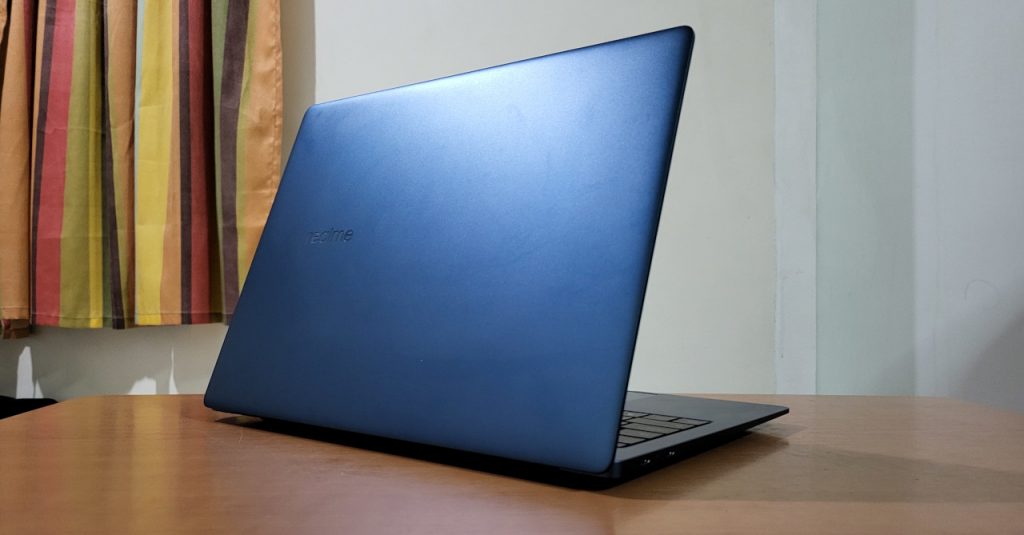 Along with general performance, the realme Book also has an impressive battery life. After running a 2 and 1/2 hour movie at 50% brightness and volume, the laptop still had 72% remaining. This should mean you can use the laptop for 8 hours or more on a single charge before you need to hunt for an outlet. 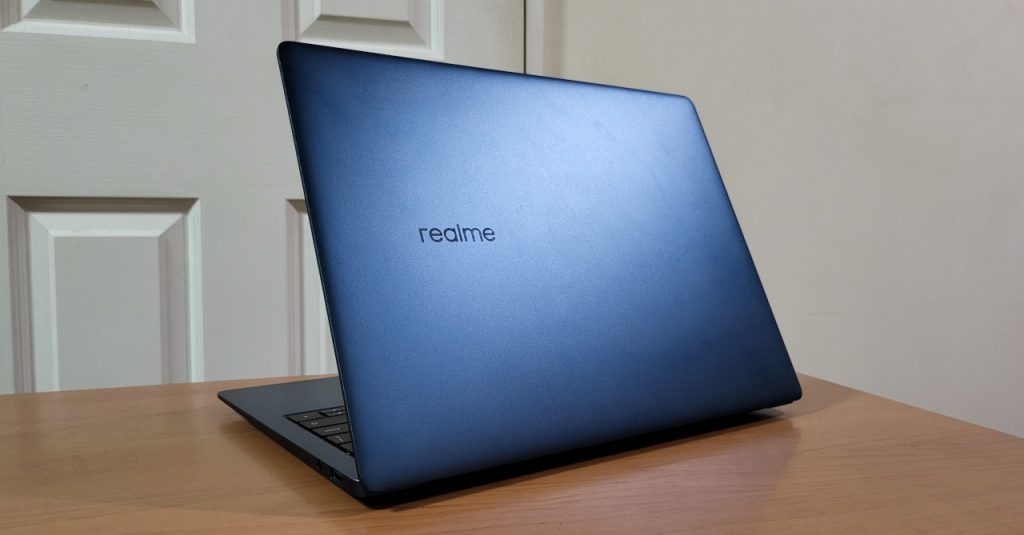 For us, a good ultrabook should have great everyday performance, beautiful yet practical design, and long battery life. The realme Book meets all these requirements, all while having a quality display, surprisingly good speakers, and a nice keyboard for typing. On top of these, the realme Book is priced at PHP 47,990 for the i5 variant — this makes it a bit more affordable than other competing laptops with an 11th gen CPU.

Because of these, the realme Book is highly recommended to users who want a premium ultraportable without spending over PHP 50k.