Does realme's first Android tablet deliver? Here's what we think! 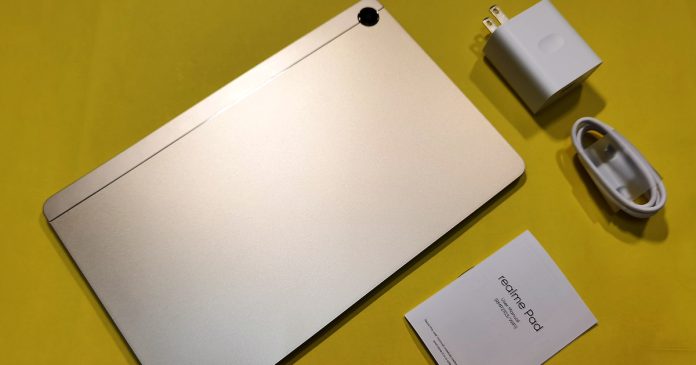 After expanding to Smart TVs earlier this year and even laptops just last month, realme is not stopping just yet as the brand has just launched a range of new devices in the Philippines, the highlight being the realme Pad.

As the name implies, the realme Pad is the brand’s first Android tablet, and it promises to offer great performance at a price point that won’t break the bank (much like realme’s bang-for-buck smartphones). Specifically, the relame Pad is a 10.4-inch tablet which is powered by a MediaTek Helio G80 processor — an SoC that should give the tablet enough power for everyday use and for gaming. And to complement this, the realme Pad features a fairly large 7100mAh battery.

Based on the specs sheet, the realme Pad looks quite promising. Of course, a device being great on paper isn’t everything, so how does it perform in actual use? Find out here in our full review! 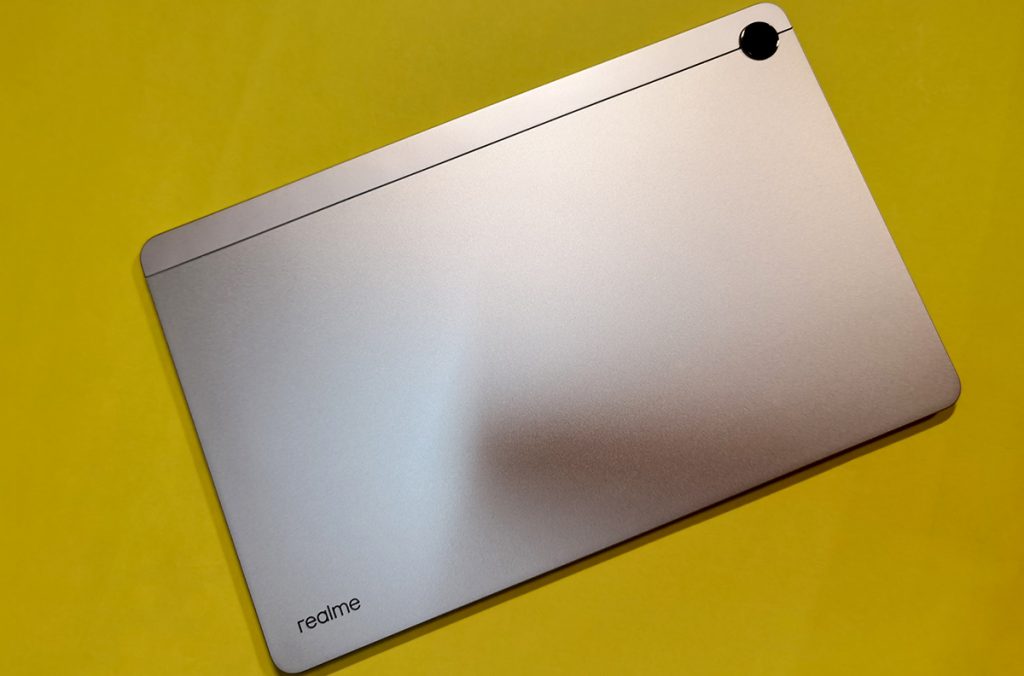 As the first Android Tablet that realme has produced, the brand sure did attempt to kick things off with a bang especially with their overall design.

Built with a solid aluminum frame, CNC diamond cutting, anodizing, precision and sandblasting, the realme Pad absolutely stunning. The singular chrome etched line that cuts through the sandblasted matte back of the realme Pad adds more nuance and elevates the otherwise normal design of the tablet. 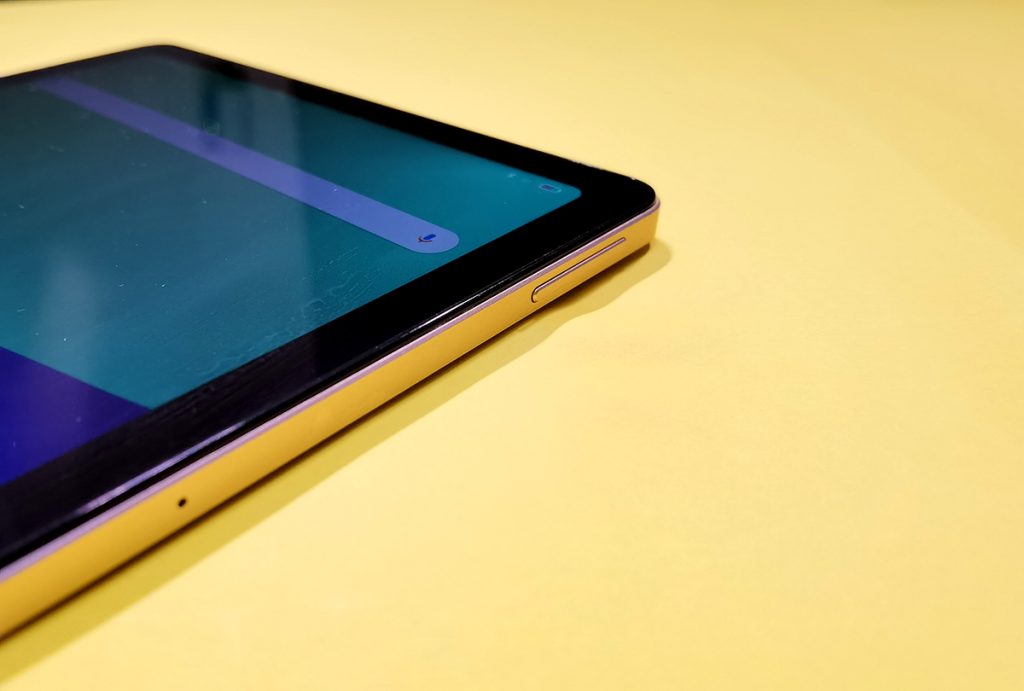 Despite having a large display at 10.4-inches, the realme Pad is only 6.9mm thin making the device quite handy. It’s big enough for its use but not superbly large enough that it becomes unwieldy. 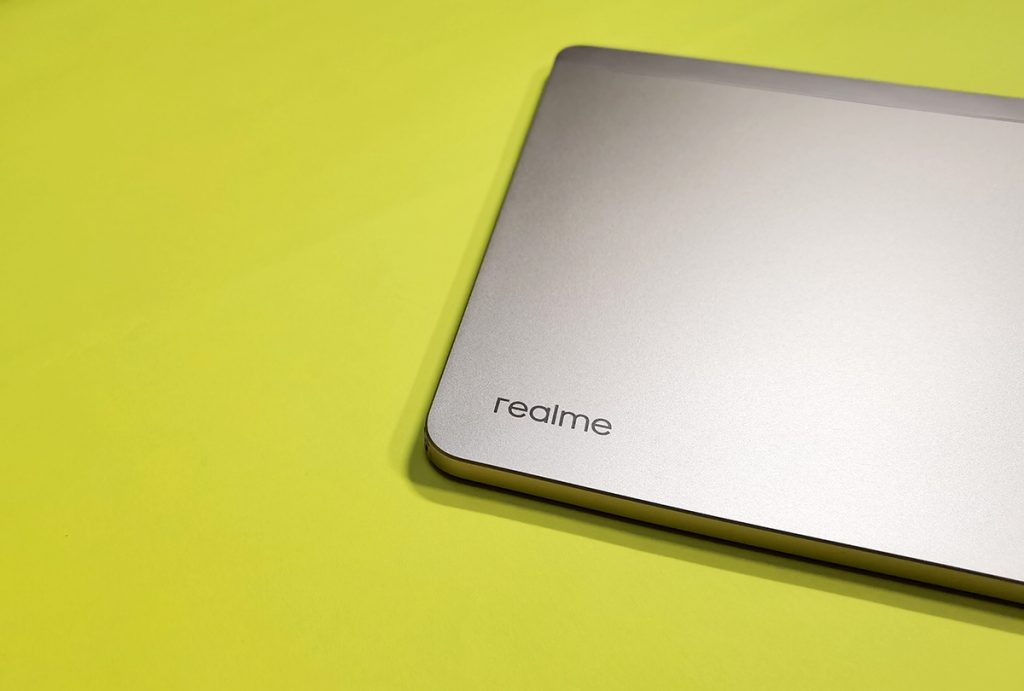 To finish off the design, realme made sure that the corners of the realme Pad are sleek and smooth with gorgeous aluminum bezels. The overall construction of the realme Pad is simply delectable considering the price-point (which we’ll go into a bit later). 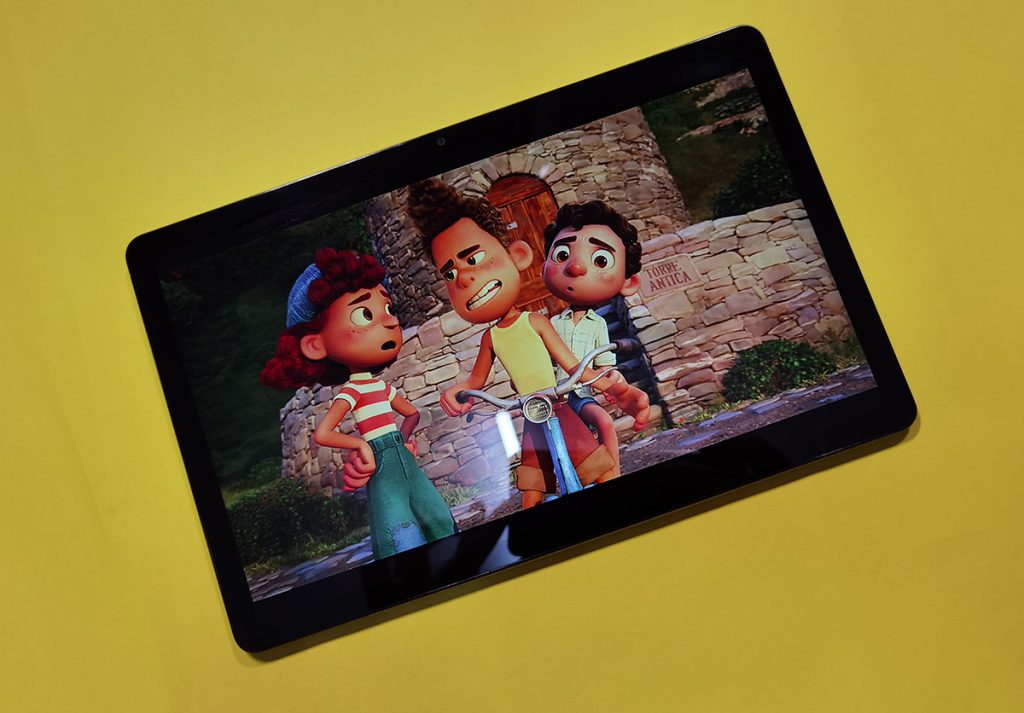 One of the main use cases for Android Tablets, aside from using productivity apps, is the daily consumption of videos. Given this, the realme Pad uses a gorgeous 2K WUXGA+ (Widescreen Ultra eXtended Graphics Array Plus) screen which produces vivid images and color reproduction.

While not AMOLED, the 10.4-inch screen is fairly sufficient when you want to watch your favorite shows or stream videos constantly. Zoom calls and meetings are managed better as well because of the larger screen versus that of a phone. The only concern would be the screen brightness when you go outdoors. While the realme Pad can go up to 360 nits of brightness, we find this only sufficiently useful when consuming static content like reading blogs, ebooks or modules. When watching videos outdoor and under direct sunlight, you may have a bit of a harder time appreciating what’s happening on screen (but not to say that you can’t view them entirely). That being said, if you do want to binge-watch movies on the realme Pad we advise you do them indoors instead. 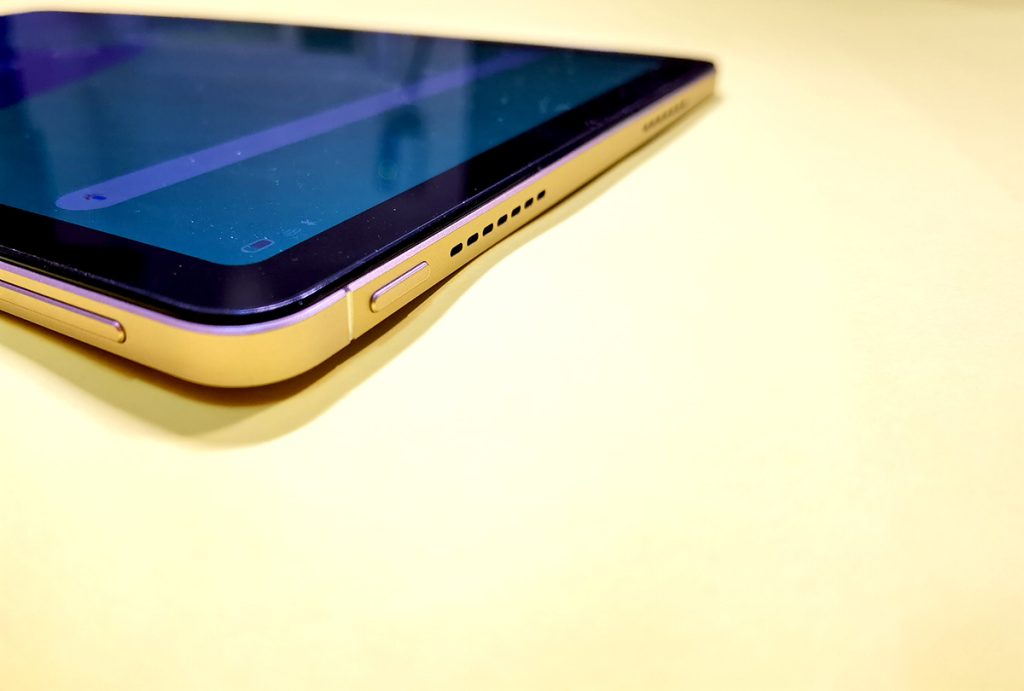 To add icing to an already delectable technology cake that is the realme Pad, the device also comes with a Dolby-Atmos Quad speakers to give you better movie immersion.  The quad speakers can go really loud but even at max volume the speakers do not seem to break. So, go ahead and loop those Twice videos. You know you want to. 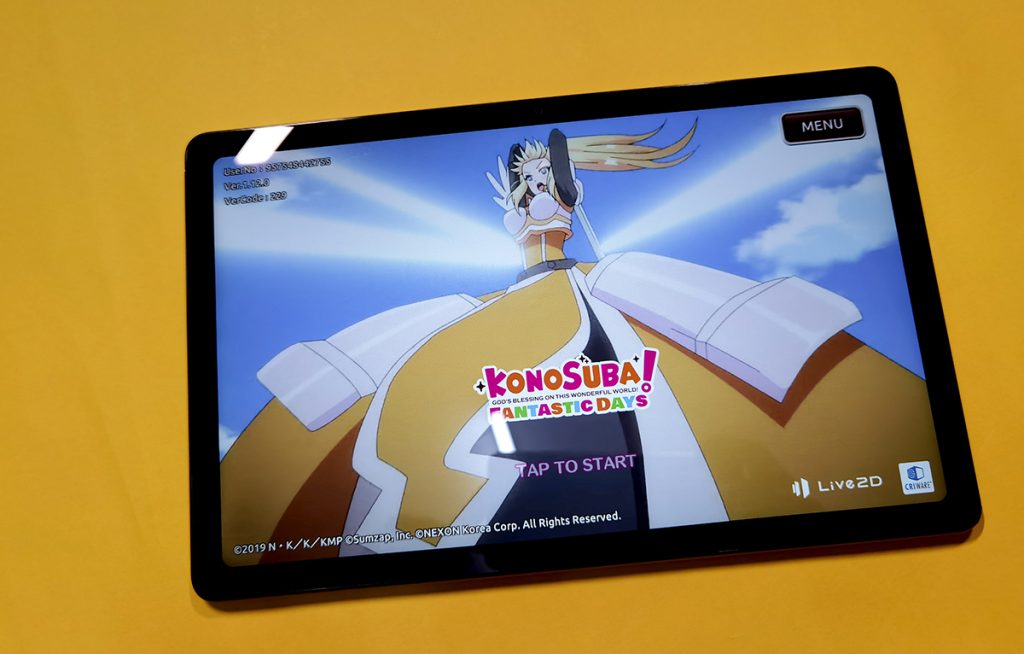 The realme Pad is powered by MediaTek’s Helio G80 Processor, a processor we’re quite familiar with. And while on paper this may seem, outdated, realme knows how to properly calibrate their processor with their internals to get the best out of the chipset and manage to still create a stable device.

We’ve tested the realme Pad with a couple of games and they were able to perform relatively well — although you will have to clock down the graphic settings to low to get consistently high framerates.

Simpler gacha games run superbly well since these do not necessarily consume a lot of resources.

For esports titles like Mobile Legends Bang-Bang and Pokemon Unite (yes, we’re including this as part of esports now haha), you’ll have to put the settings to low.

What about games like Genshin Impact and more demanding game titles? You can theoretically game with the realme Pad, although we would not recommend it at least for the 3GB variant. We recommend using the 6GB variant for games like this. 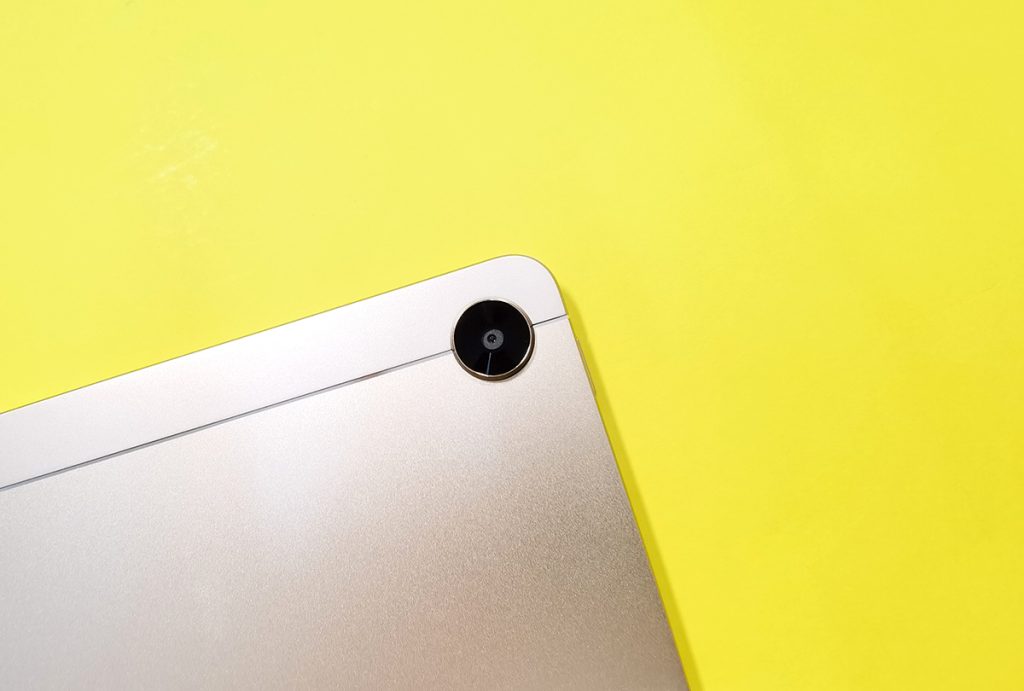 If there’s one glaring mishap of the realme Pad, it would be its camera — particularly its rear camera. While megapixels isn’t everything, the 8MP rear shooter on the realme Pad just isn’t enough to properly take excellent shots even with supported lights or even during day time. This is quite odd as realme has always been particular about the photo capabilities of their devices even up to their entry-level C models.

The rear camera felt like it’s there for the sake of completion, just to have something. And while people may not necessarily choose their Android Tablets based on the photoshooting capabilities that it has, it’s great to know that your device is capable when you need it to be. 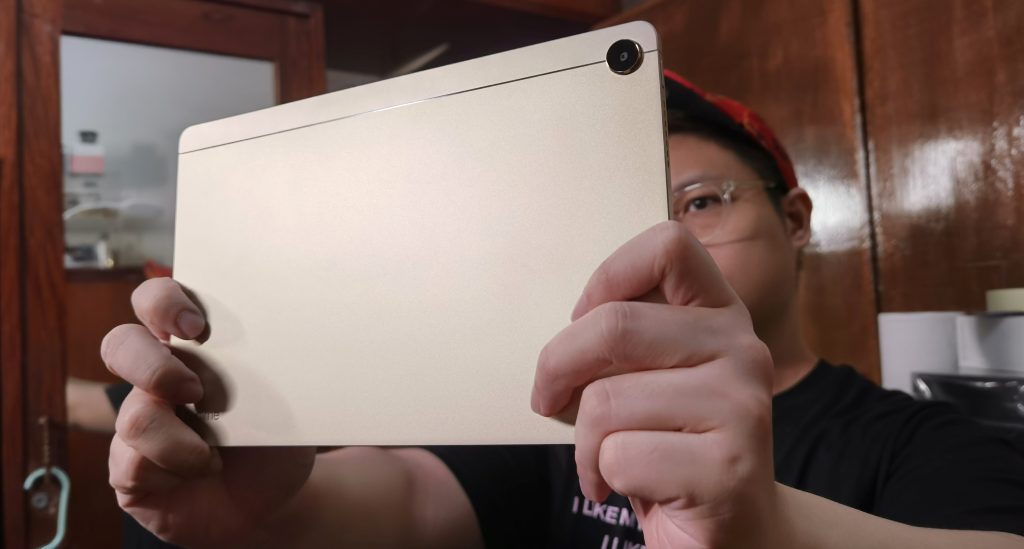 The front-facing camera on the realme Pad seemed to fair better than its rear camera counterpart. In fact, I dare say that the front-facing is the main feature camera among the two lenses. Being centered towards the side allows you better angle when you use the device horizontally — which is the usual use orientation of the pad anyway. You would look immensely better on Zoom calls or online-classes since the lens on the front-facing camera also has a wider angle. Because of this, the realme Pad is a pretty good device for group selfie shots. (Are we reviving the groufie trend now, realme?) 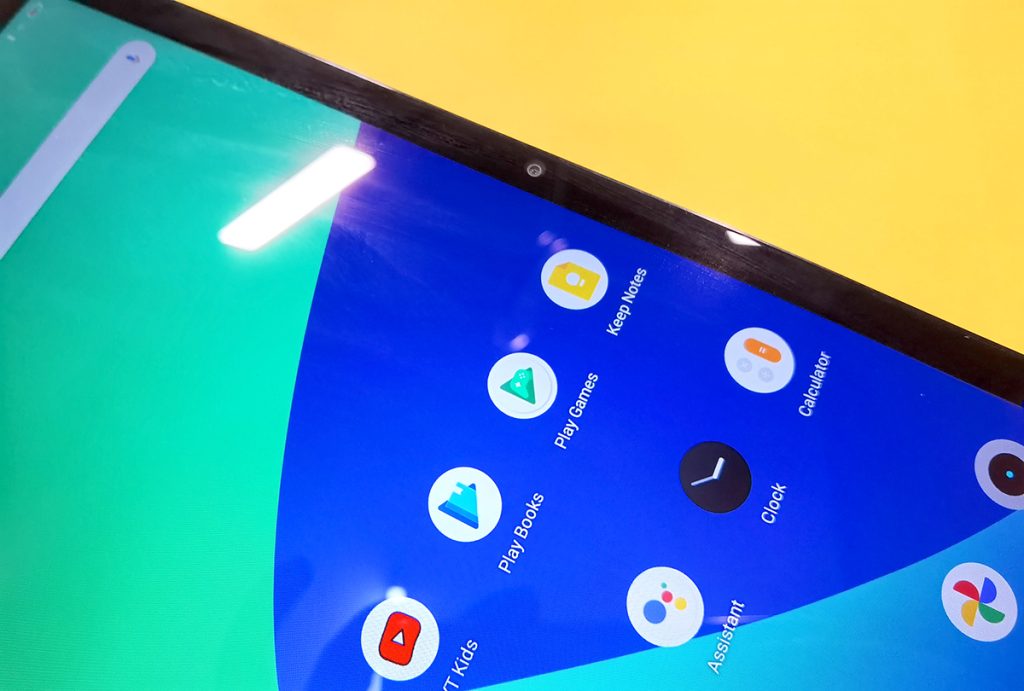 Of course, because of the front-facing camera’s placement, using the device to shoot vertical portraits will pose quite a challenge due to potential framing issues. 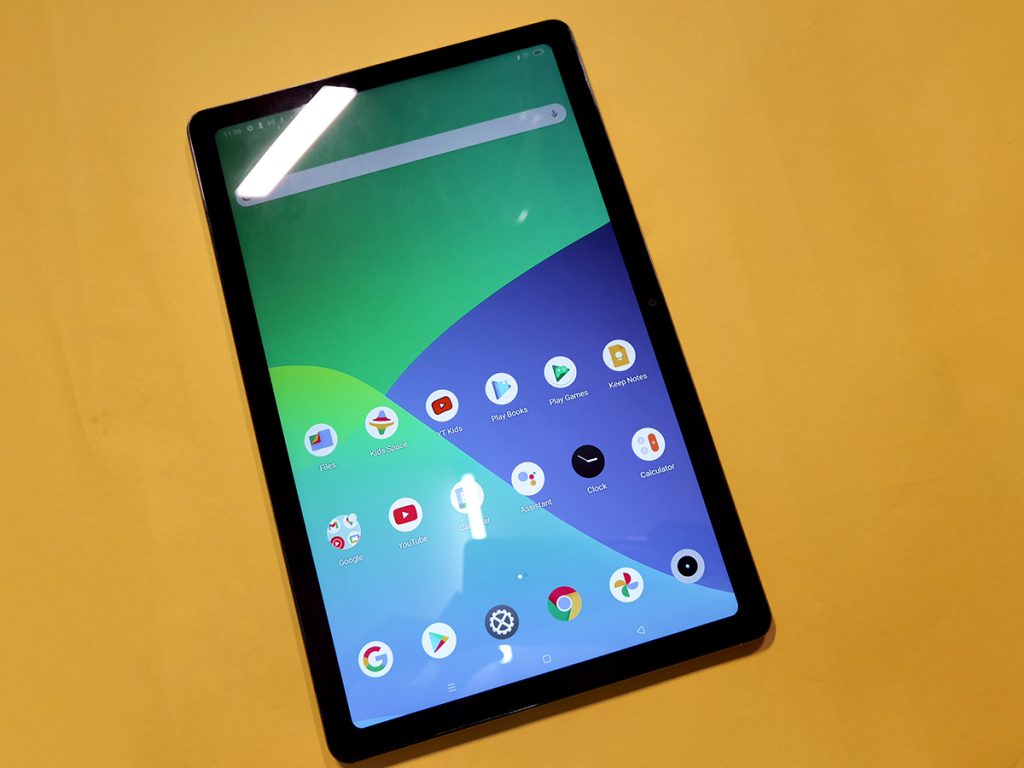 With an excellent build-quality and large screen display, how long can the realme Pad run in a one charge? The great thing with MediaTek’s Helio G80 is its excellent power management and the device having a whopping 7100mah internal battery, the Pad can run for a whole day before the need to recharging again. In our everyday use, we clock in about 11-12 hours of mixed usage (i.e. gaming sessions for maybe 2 – 3 hours, streamed a 1 1/2 hour animated movie over at YouTube, and general social media usage for the entire day). If you do have to recharge the realme Pad, it comes with an 18watt Super Fast Charger so you don’t have to wait too long for it to reach 100% again.

The realme Pad is also equipped with a dual mic noise cancellation, which is absolutely great for those Zoom Calls or online classes that you take.

Despite the rear camera mishap, the entire build quality, adequate internals and gorgeous screen plus super loud audio, the realme Pad is a great first Android Tablet offering from the brand. We’re hoping that the product becomes a success because we’re excited what more realme can do with this product line.

Starting October 22, customers can avail the realme Pad 3GB+32GB for an exclusive early-bird deal on Shopee of only Php 8,990, a Php 2,000 discount from SRP.

The realme Pad is also available in nearly 500 realme stores and over 4,000 partner dealers nationwide. From October 22 to 31, the realme 3GB+32GB variant will also be available at a discounted price of Php 9,990, Php 1,000 off from SRP.