realme TechLife Robot Vacuum Review | As Smart as They Come

Quite an impressive device in many ways! 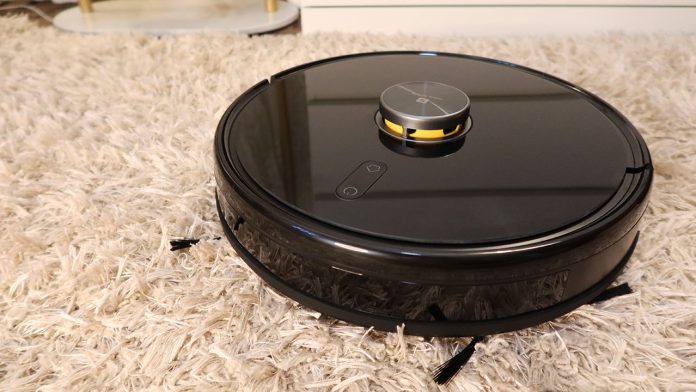 realme has continually expanded its TechLife brand of AIoT products since it launched the new product line earlier this year. From wearables and audio devices to smart home products, the company is slowly making a name for itself outside of its initial smartphone market. One of the latest products realme has launched in the Philippines under its lineup of smart home devices is the Techlife Robot Vacuum, which it initially unveiled back in June. With a price tag of PHP 16,990, the new smart vacuum cleaner is one of the pricier options of its kind in the market, but it does come with a slew of features that may make it worth the investment.

The large packaging of the TechLife Robot Vacuum, which consists of a white cardboard box with brown cardboard inserts, is mostly taken up by the device itself. It also comes with its charging base and a cleaning tool that combines a brush, plastic comb, and a small blade to cut tangled hair and string from any of its moving parts. There’s also a user manual to help people get acquainted with the vacuum and its features as well as a guide to download and connect the device to the realme Link app. 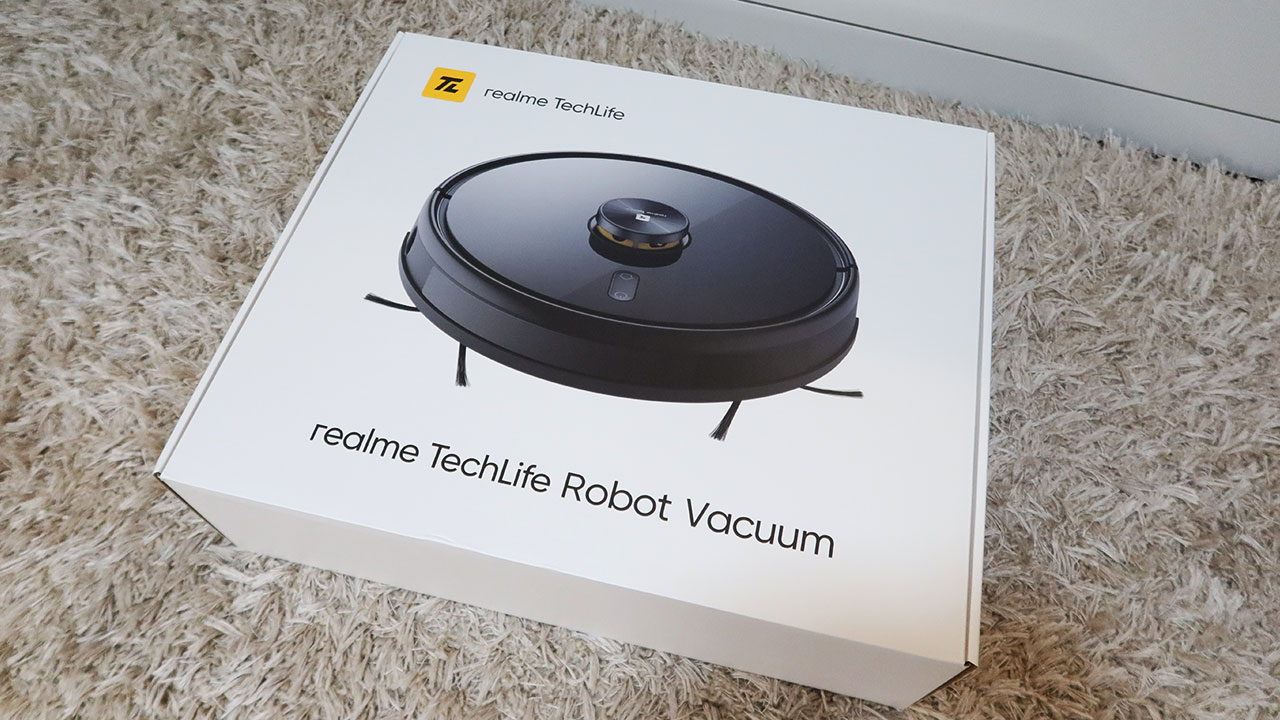 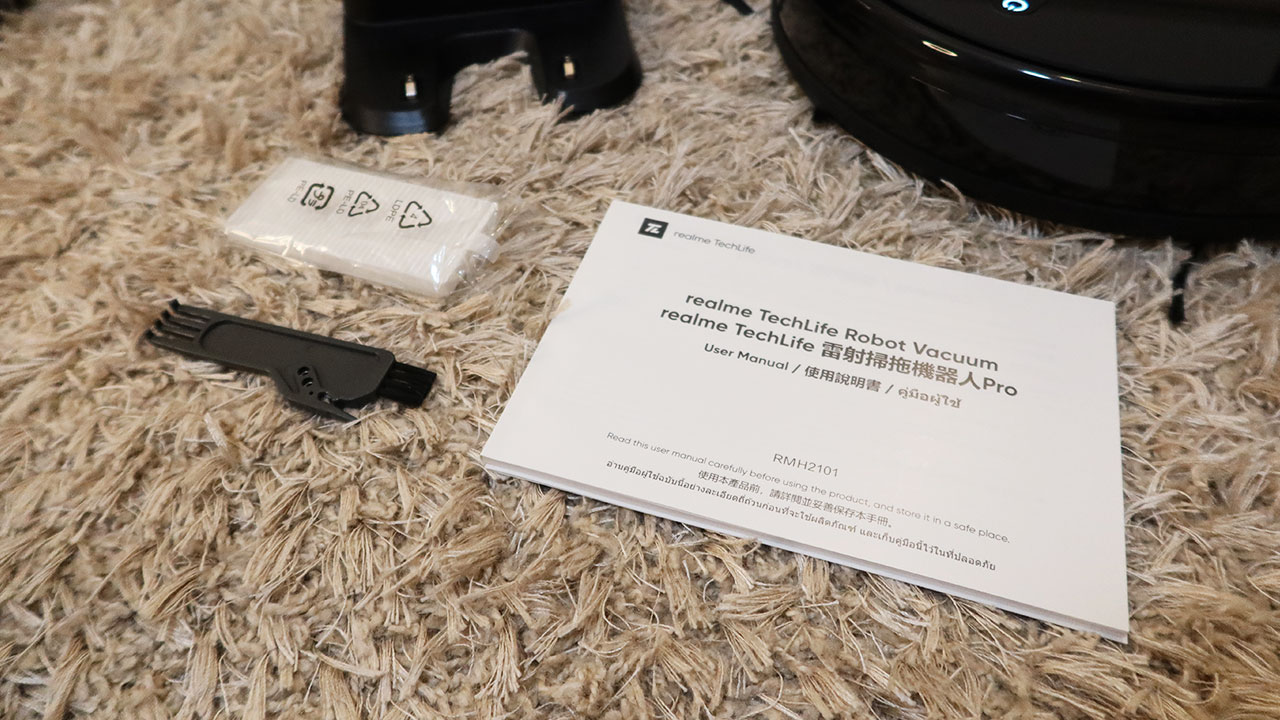 The realme TechLife Robot Vacuum comes in an all-black and mostly plastic body, the latter of which helps to keep its weight lower. The sides and bottom of the device feature matte black plastic while the top comes in a reflective black that makes the device look sleek. The front bumper is shielded by tempered glass, making it more capable of withstanding bumps than plastic. The entire body measures 35cm in diameter and 10cm in height at its tallest point, which definitely takes up quite a bit of space but is also around the same size as some of its closest competitors. It’s also pretty hefty, weighing in at about 3.3 kilograms or a little over 7 pounds so it does feel pretty robust.

The aforementioned tempered glass front bumper is also able to shift into the body quite a bit and is backed by springs to also significantly reduce the impact and force of bumps. The top of the vacuum is equipped with two buttons, one for power and one for sending it back to the charging station, as well as a small short tower right in the middle where its LiDAR smart mapping and navigation sensors are housed. It also has several other external sensors, including ones in the bumper and the side of the device, all of which help it navigate through and around rooms, walls, and obstacles. In total, the TechLife Robot Vacuum is equipped with 38 sensors inside and out, serving different or overlapping purposes. 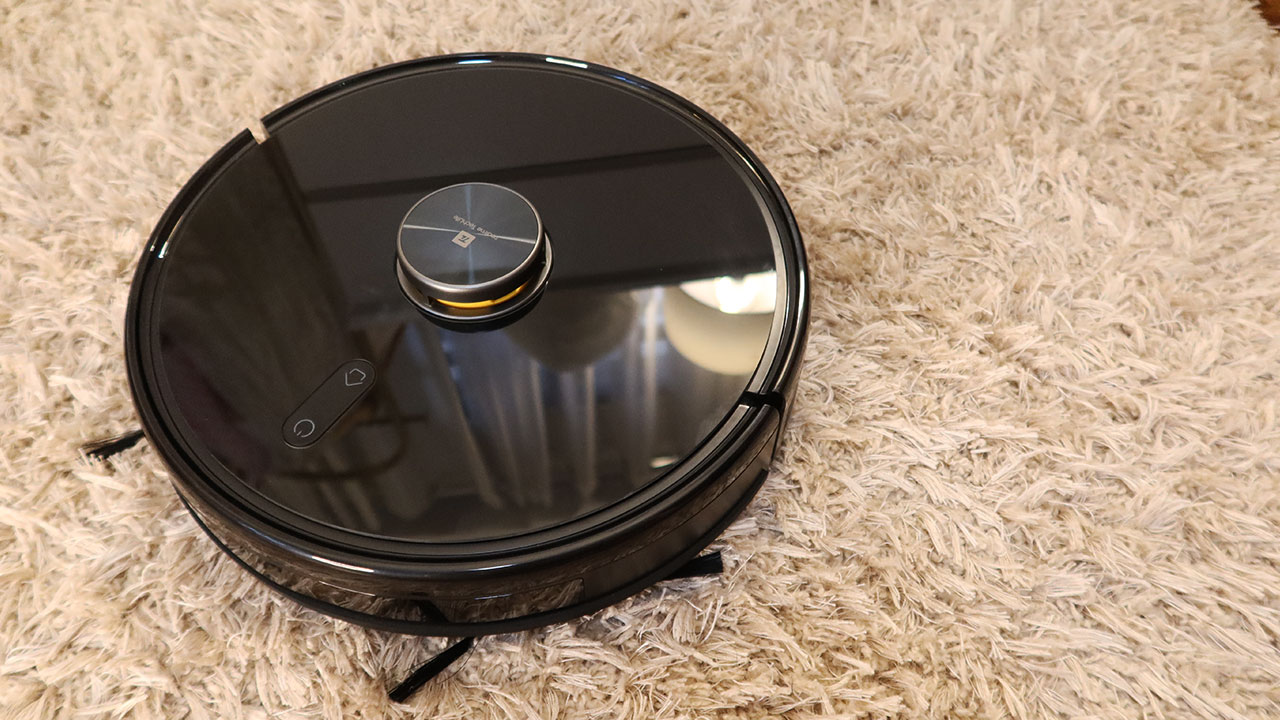 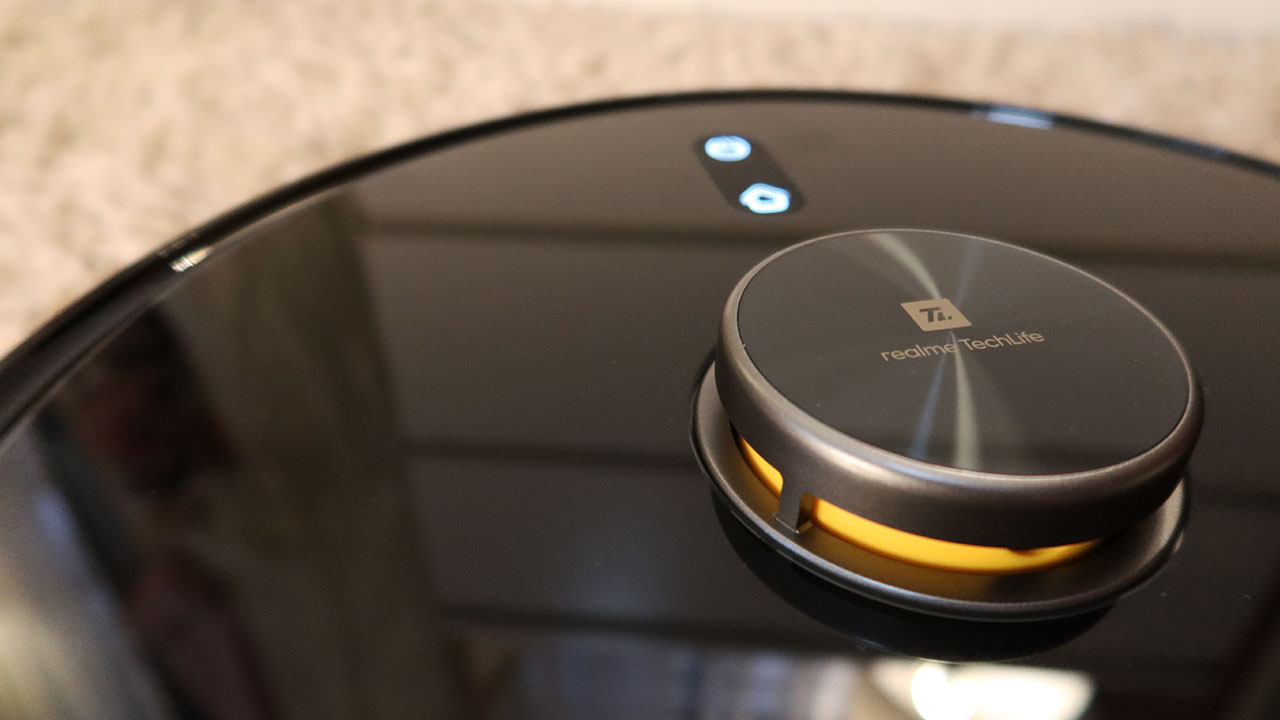 The vacuum is also equipped with a speaker that is used for several voice prompts, including powering on, starting and completing vacuum operations, and charging, and more. The vacuum can also notify the user with a voice prompt on the rare occasion that it gets stuck or the user is able to easily locate it via voice prompt by using the “find robot” function in the realme Link app. 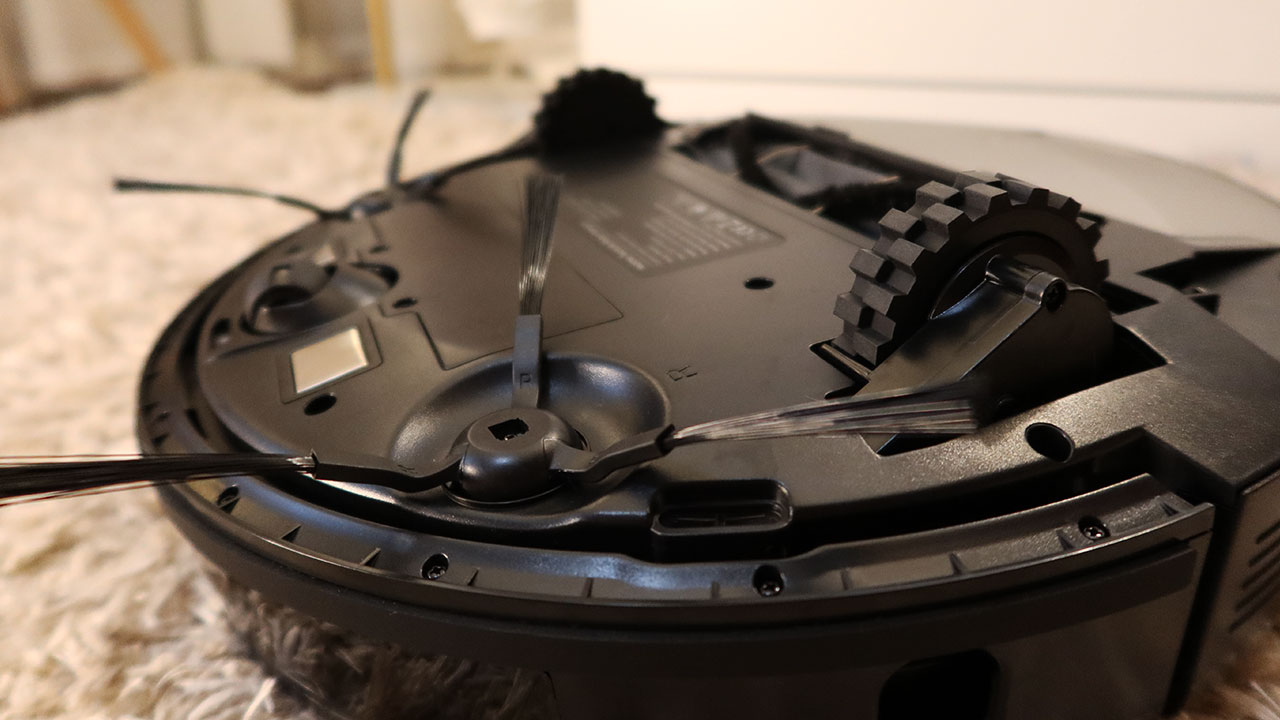 For motion, the TechLife Robot Vacuum is equipped with a pair of large drive wheels with large treads that are mounted on independent suspension arms. The wheel setup helps it climb up and down low heights, such as onto or from carpeting or rubber mats. Rotation and turning is handled by a small swivel wheel near the front of the vacuum in between its two metal charging contact pads.

Beside the contact pads are the vacuum’s two side brushes that help pull dirt and debris to the front of the device in line with its vacuum intake and main roller brush that’s positioned near the middle of its underside. The roller brush, which features both synthetic bristles and rubber flaps, along with the vacuum intake pull up dirt and debris directly into the vacuum’s dust bin. The dust bin is equipped with several filters, including a coarse filter and a washable HEPA filter to help keep any particles from escaping it and back into the room through the vacuum exhaust. Once cleaning is done, the dust bin can be pulled out through the back of the vacuum and opened up for easy cleaning of not only the container itself but the filters as well. 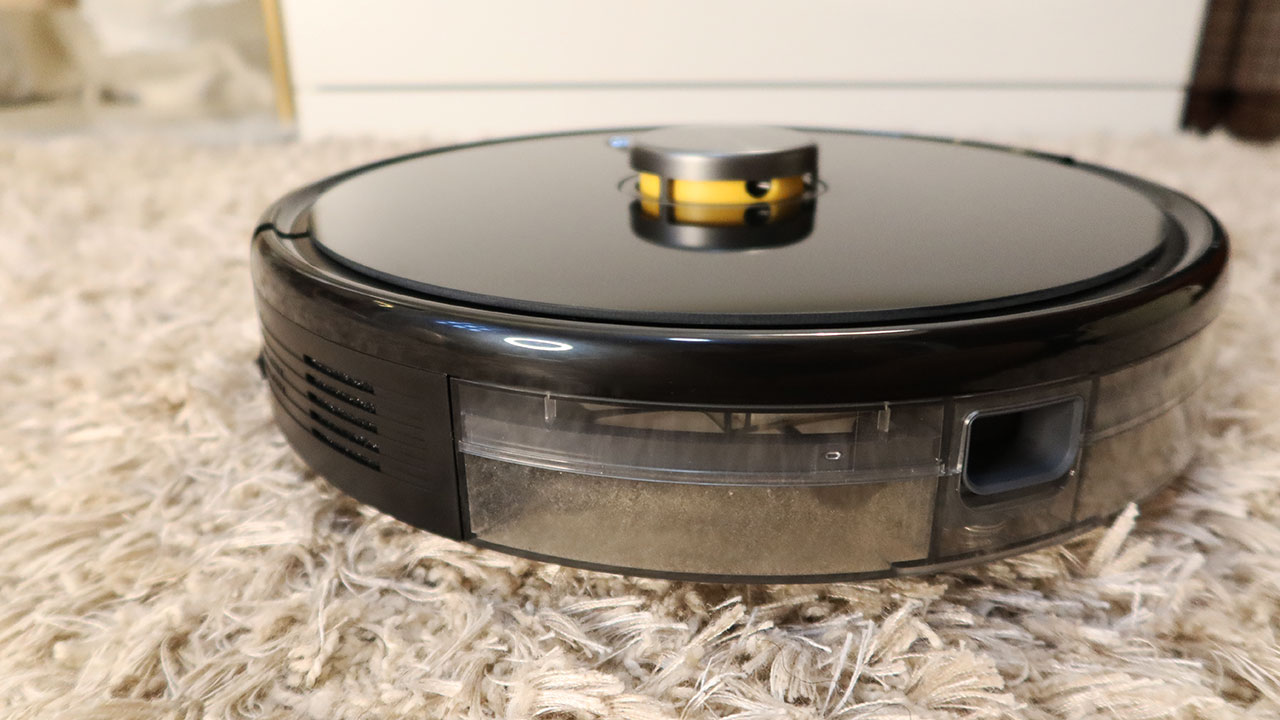 Users will have to be careful when cleaning the dust bin though as it also has a thin, clear plastic flap that prevents dust from going back out through the intake when the vacuum is turned off that could snap off if it gets snagged while the bin is being cleaned.

A Mopping Kit Package can also be purchased separately that includes a 2-in-1 dust bin & water tank as well as washable and disposable mop pads for the TechLife Robot Vaccum’s mopping functionality. This package was not included with our review unit so we weren’t able to test this out.

As for the included charging base, it only takes up about a 15 square centimeter area on the floor. However, it not only requires at least another 15 centimeters of space in front of it and on each side but it also doesn’t allow the user to place virtual walls or no-go zones (both of which will be explained in a bit) within one meter of the charging base. So users will want to place the charging base in an area where there’s a lot of open space that will be included in the vacuum route. 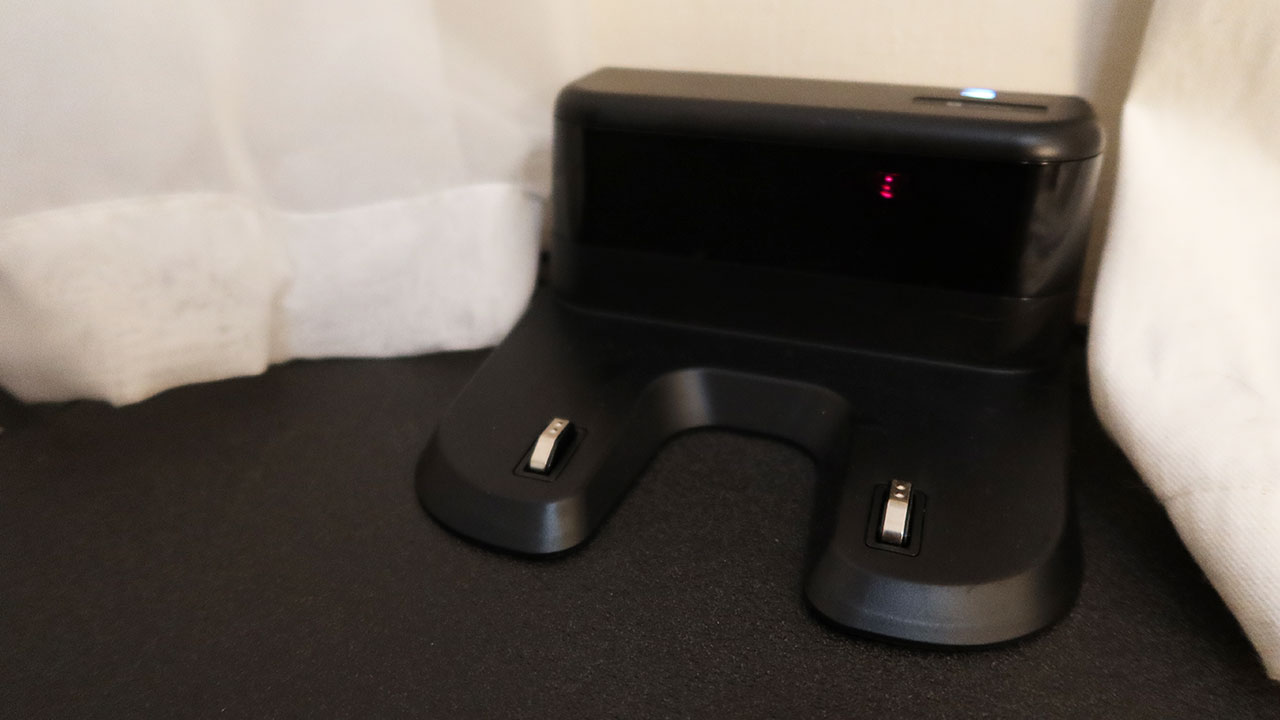 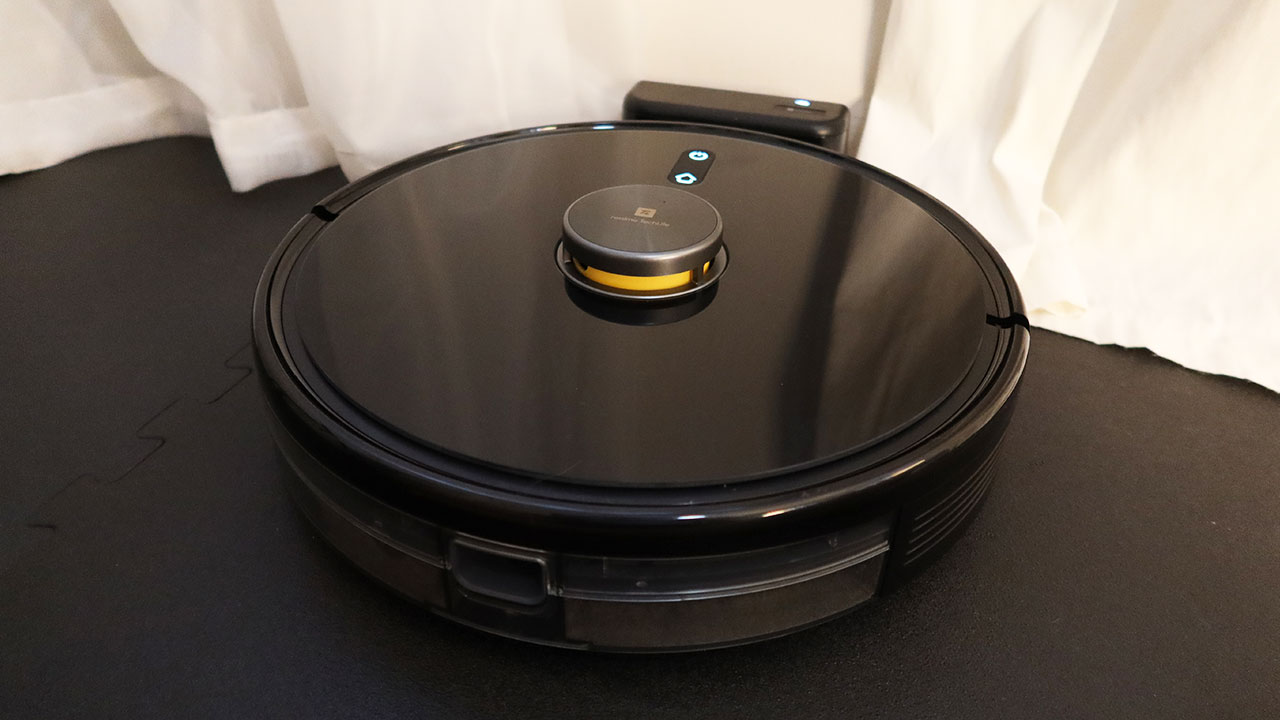 Most of the features and functions of the TechLife Robot Vacuum can be accessed and controlled via the realme Link app. Connecting the vacuum and the app is a fairly quick and painless process that only involves creating a realme account, making sure the vacuum is on, and adding it to the app. Once the vacuum and app are linked, users can start their first scanning and cleaning cycle wherein the vacuum uses its LiDAR sensors to start mapping out the room. Once the room is mapped and cleaned for the first time, users can then use the app to change the vacuum’s function and settings, including its vacuuming strength that includes Quiet, Normal, Turbo, and Max, as well as its water level when mopping.

Users can utilize the app to customize the mapped room/s by easily adding no-go or no-mop zones as well as virtual walls to prevent the vacuum from going to certain areas. While no-go zones are easier to use for blocking out entire areas, virtual walls can be used for more precise blocking. There’s also an “edit room” feature to merge and split rooms, rename them, as well as customize the vacuum strength or water level for each of them. The “edit room” feature works best when the vacuum is able to map and move between several rooms unimpeded, such as homes with the same floor height or level all throughout.

Some of the other features that users have access to on the realme Link app including scheduled cleaning cycles, a Do Not Disturb mode, a manual control mode, and managing the different maps that the vacuum has successfully scanned. Those who have to manually set up the vacuum and charge base every time they vacuum each room can make use of the map management feature to save the map of different rooms separately and easily switch between them when needed. For those with the Mopping Kit Package, the mopping mopping pattern can also be set. Lastly, the realme Link app allows the robot vacuum to be controlled via either Google Assistant or Alexa.

As Smart as They Come

The realme TechLife Robot Vacuum was able to map out the rooms we used it in pretty easily. It was able to see most of the obstructions and adjust its mapping as it went through the first cleaning cycles for each area. It was also able to easily find its way out of tight areas as well as around obstructions and found ways to get itself out of being stuck most of the time. More impressively, it was able to go between different flooring types with no issues. Particularly, it was able to clean a room that had a carpet, an area with rubber gym mats, and wood flooring with ease.

The vacuum’s Intelligent Surface Adaptation Technology made it capable of adjusting to the different flooring types and areas of the room, such as increasing the vacuum strength and slowing down its movement while it was on the carpeted area or increasing the speed of its side brushes when it ran along one of the room’s walls. The realme Link app’s no-go zone and virtual wall features worked pretty well to prevent the vacuum from going into areas we wanted it to avoid. 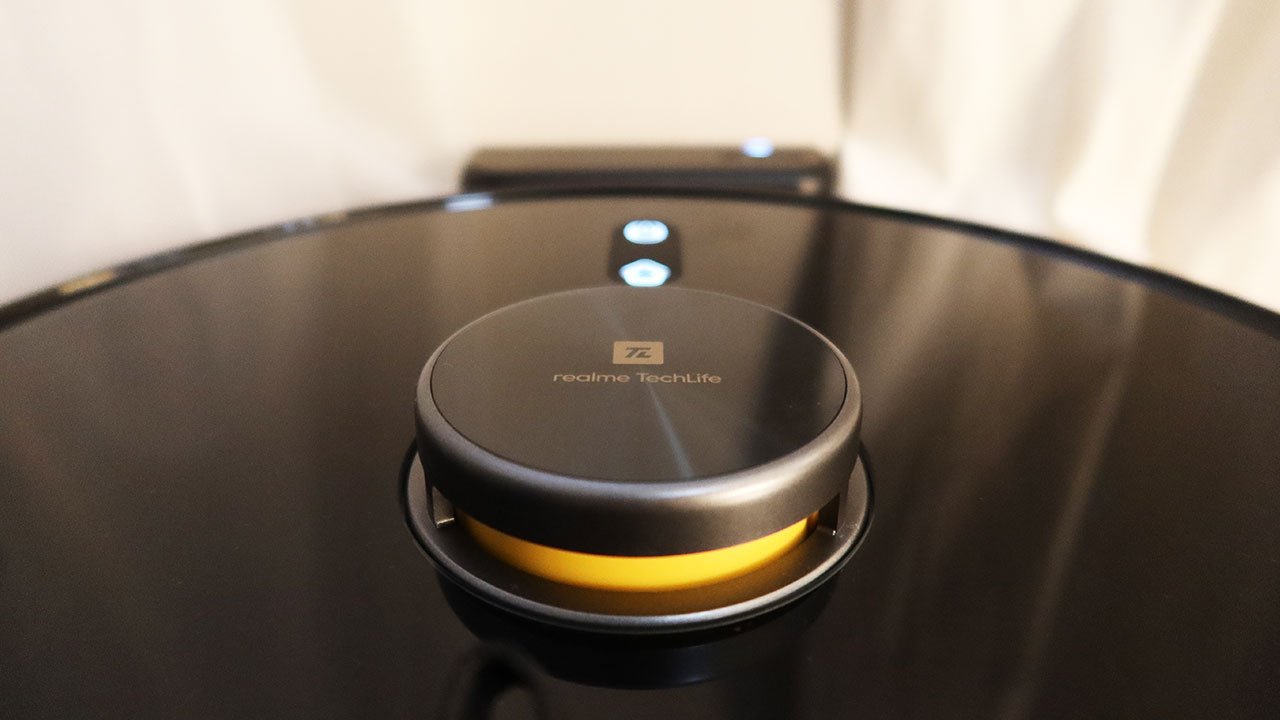 During our tests, the standard vacuum operation of the TechLife Robot Vacuum was able to, on average, cover one square meter of the room every minute and a half along with a battery consumption of about one percent. However, this may change depending on the layout of the room, the different types of flooring that may be present, and the settings of the vacuum so your mileage may vary. Nonetheless, the TechLife Robot Vacuum will definitely be able to clean at least a 100 square-meter space before it will need to go back to its base station to recharge. Fully recharging the vacuum’s 5200 mAh battery will take around four to six hours.

The realme TechLife Robot Vacuum is definitely an impressive device in many ways. Its mapping technology and array of sensors make it one of the few robot vacuums that can be truly left to its own devices and the features that realme’s Link app provides make it incredibly versatile. Its ability to intelligently move around different obstructions, unstuck itself, and transition between floor types make it an incredibly effective automated cleaning device. Furthermore, the option to use the separately purchasable Mopping Kit Package will easily double its effectiveness. While enjoying its features does come at a relatively steep price tag of PHP 16,990, the time and effort that it can save users can easily make up for it. Those who want to be able to regularly clean their floors but don’t have the time for it will definitely want to consider the realme TechLife Robot Vacuum and everything it has to offer. 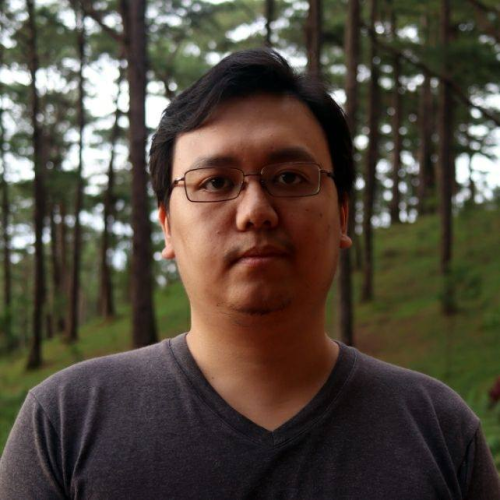