Welcome to the land of Deadly Sorcerers, Volatile Daemons, and Devious Cultists. 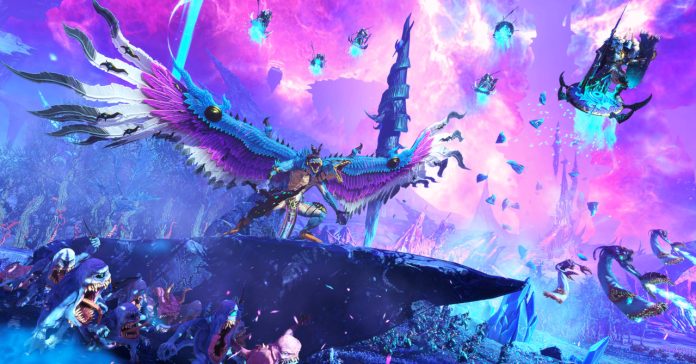 After giving us a look at Grand Cathay last month, Creative Assembly and SEGA recently gave us our first look at Tzeentch, The Raven God, and his army in Total War: Warhammer 3.

As one of the four Chaos Gods, Tzeentch’s army is composed of deadly sorcerers, volatile daemons, and devious cultists.

Specifically, the core of Tzeentch’s roster is constructed around ghastly daemons such as the Pink and Blue Horrors and the abominable Flamers of Tzeentch who fling hell-fire at the enemy. These are accompanied by flying units such as Doom Knights, Burning Chariots, and Screamers of Tzeentch.

Leading the charge in Tzeentch’s army is Kairos Fateweaver. Kairos is one of the most powerful spellcasters in Total War: Warhammer 3, and his main ability, Staff of Tomorrow, dramatically increases the rate at which he can cast magic. Thanks to this, Kairos is able to channel a terrifying mix of the most devastating spells in existence, including those from the new Lore of Tzeentch.

The armies of Tzeentch in Warhammer 3 are composed of spellcaster that can blast enemy ranks from a distance, all while being supported by daemonic flying units. This means players who prefer to fight at a distance with spells will feel right at home with Tzeentch.

Outside of battles, The Raven God can also perform abilities within the campaign, one of which is Changing of the Ways actions which machinate diplomatic situations and manipulate other elements of reality.

Total War: Warhammer 3 is set to release sometime in 2022.