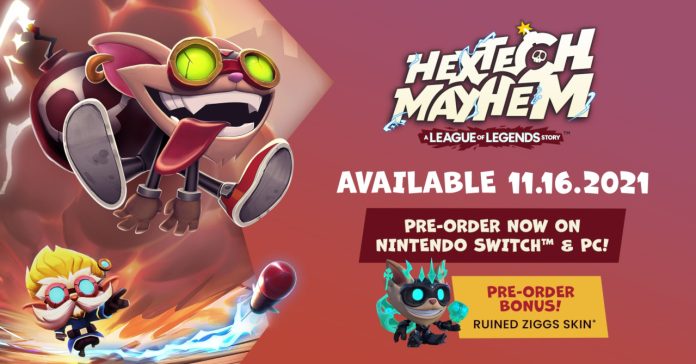 While the game will be priced at USD 10 (around PHP 500) on PC and Switch, this League of Legends spin-off will be included as part of Netflix’s new gaming service. Thanks to this, Netflix account holders will be able to play the game on their Android device.

As for its gameplay, Hextech Mayhem: A League of Legends story is a rhythm game where you play as Ziggs and Heimerdinger as they cause mayhem, while keeping on the beat.

“Bomb, bounce, and bop to the beat of the music to avoid obstacles, disarm enemies, and light fuses to achieve maximum chaos. Cause musical mayhem while outrunning no-fun-allowed Heimerdinger in your quest to build the greatest bomb the world has ever seen!

Use the Freestyle Mayhem System to create spontaneous blasts and grab bonus points… all while dodging the fun police and showing them what they’re really missing.

Leave no fuse unlit in Hextech Mayhem: A League of Legends Story.”

Hextech Mayhem releases on November 16, 2021. Pre-orders for the game ar enow open on Nintendo Switch and on PC.

For more info on the game, visit the Hextech Mayhem website.

- Advertisement -
Previous article
Huge Rewards and Deals when you use ShopeePay this 11.11 Sale
Next article
Netflix’s live action Yu Yu Hakusho series gets a release date