Is this the mid-range phone for you? 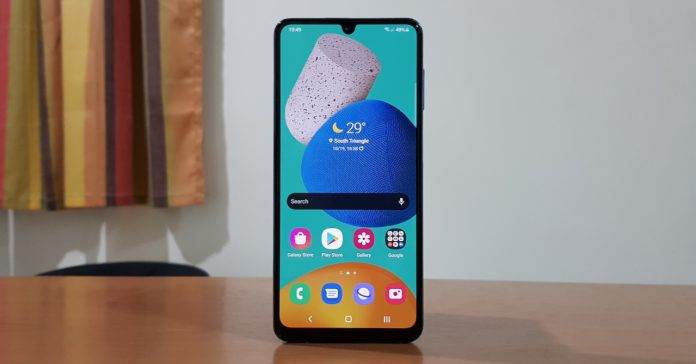 Back in September, Samsung launched the Galaxy M32 in the Philippines. This smartphone is Samsung’s affordable mid-range smartphone that promises good performance, and packs an impressive display.

For starters, the Galaxy M32 is powered by a MediaTek Helio G80 Processor that’s paired with 8GB of RAM. This processor and RAM combo should be good enough to run today’s popular mobile titles.

As for its screen, the M32’s Full HD display uses an AMOLED panel, and has a fast 90Hz refresh rate. This should make it a great partner for watching movies and playing games. 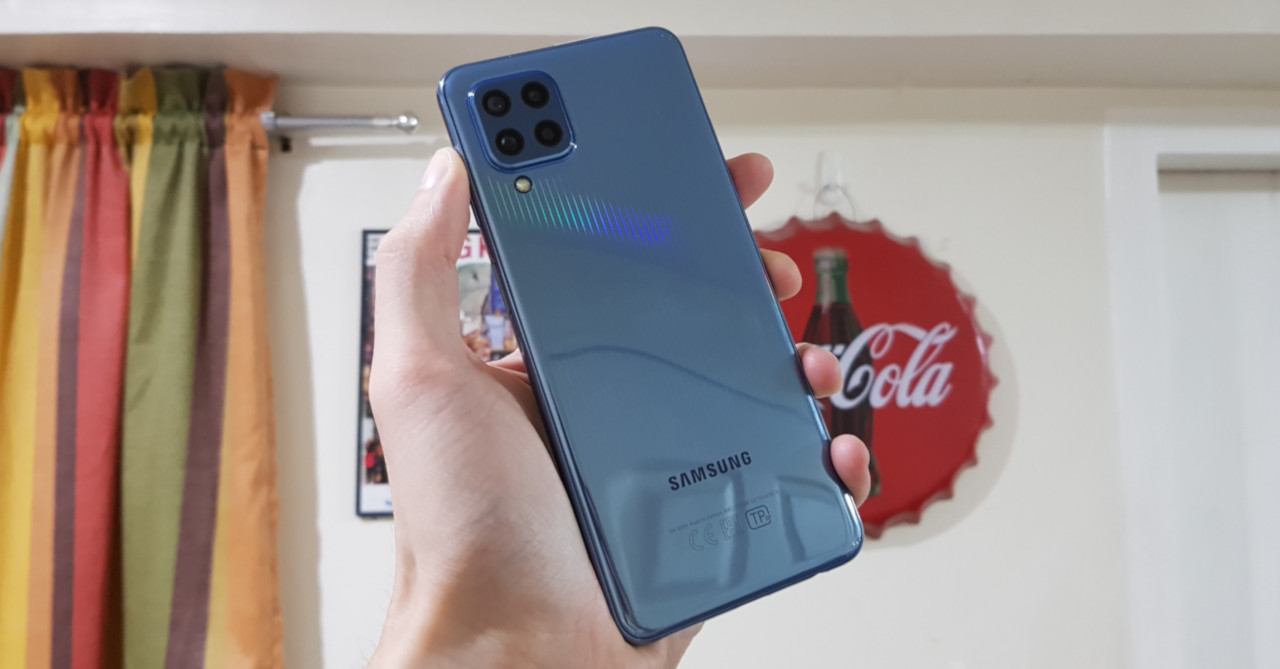 Based on its processor and display, the Galaxy M32 seems to be quite a good mid-range option. Of course, performance and screen aren’t the only things to look for in a smartphone.

So, does the Galaxy M32 excel in other areas as well? Find out here in our review! 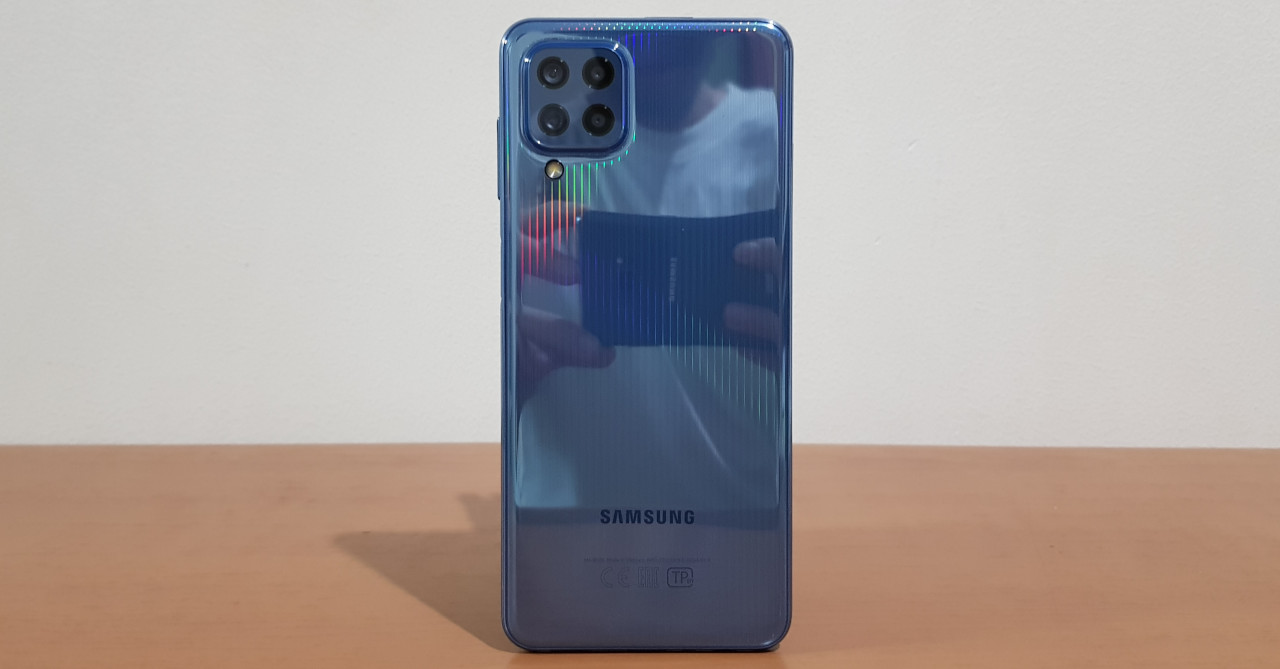 To start with, let’s look at the phone’s design. The Galaxy M32 has a unique and eye-catching finish, with vertical lines that reflect different colors depending on how light hits the back. Aside from these design elements, the M32’s back is also highly reflective (almost mirror-like even), meaning it is quite a fingerprint magnet. And at the top left, you can see the phone’s quad camera setup. 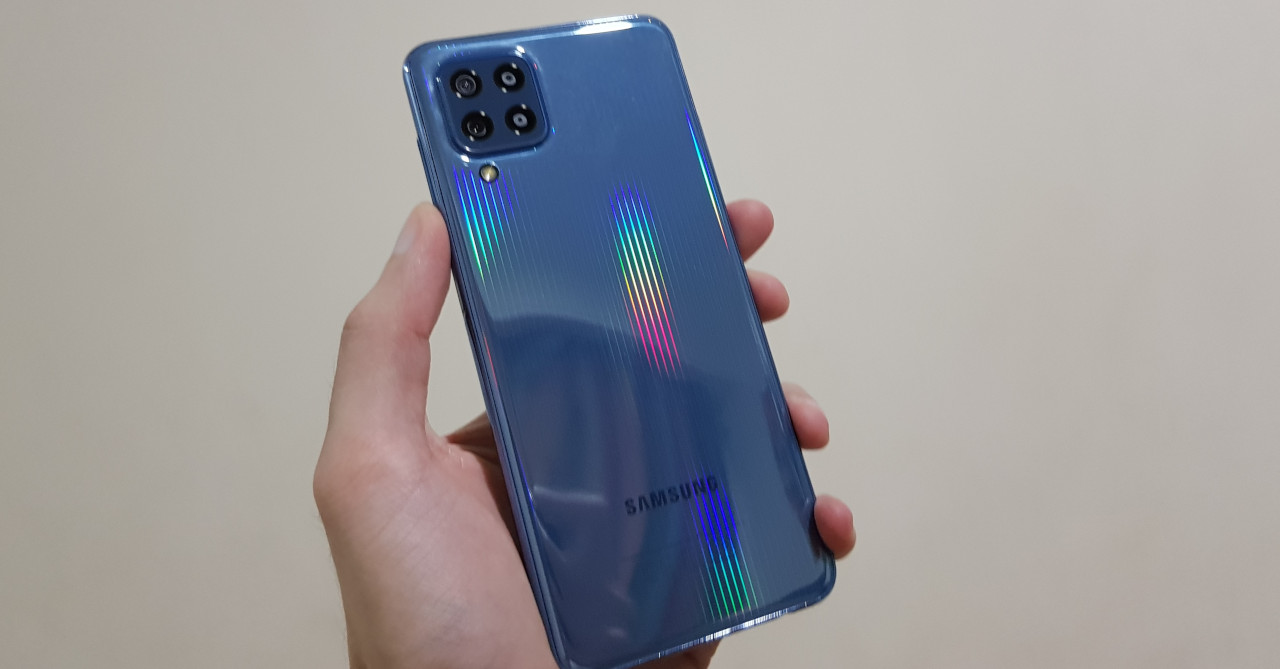 Generally, I prefer smartphones with a sleek and subtle look. Given that this phone’s design is far from subtle, I wasn’t exactly drawn to it at first. Though there is an appeal to this phone, especially for people who want eye-catching devices. Plus, if you want a more subtle look, the phone comes in a darker color so you have that option. 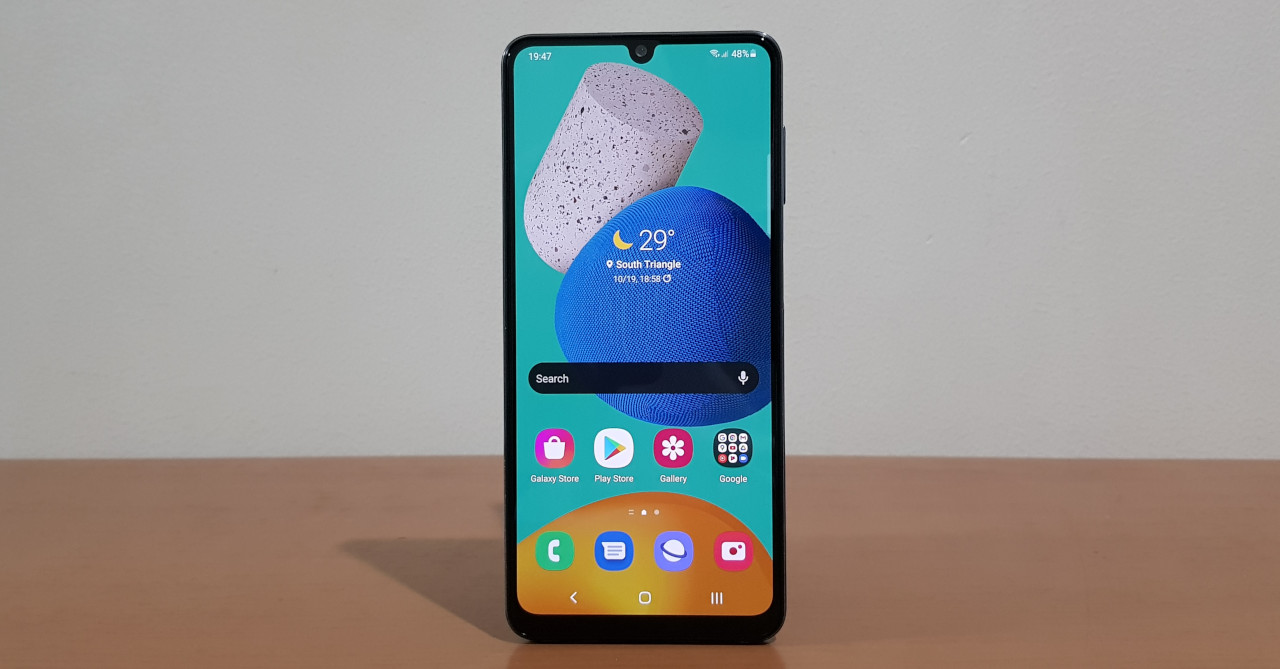 Moving to the front, we have the Galaxy M32’s 6.4-inch display, complete with a mini drop notch at the top. While most phones have holepunch notches now, the M32’s notch shouldn’t be that distracting for most users. 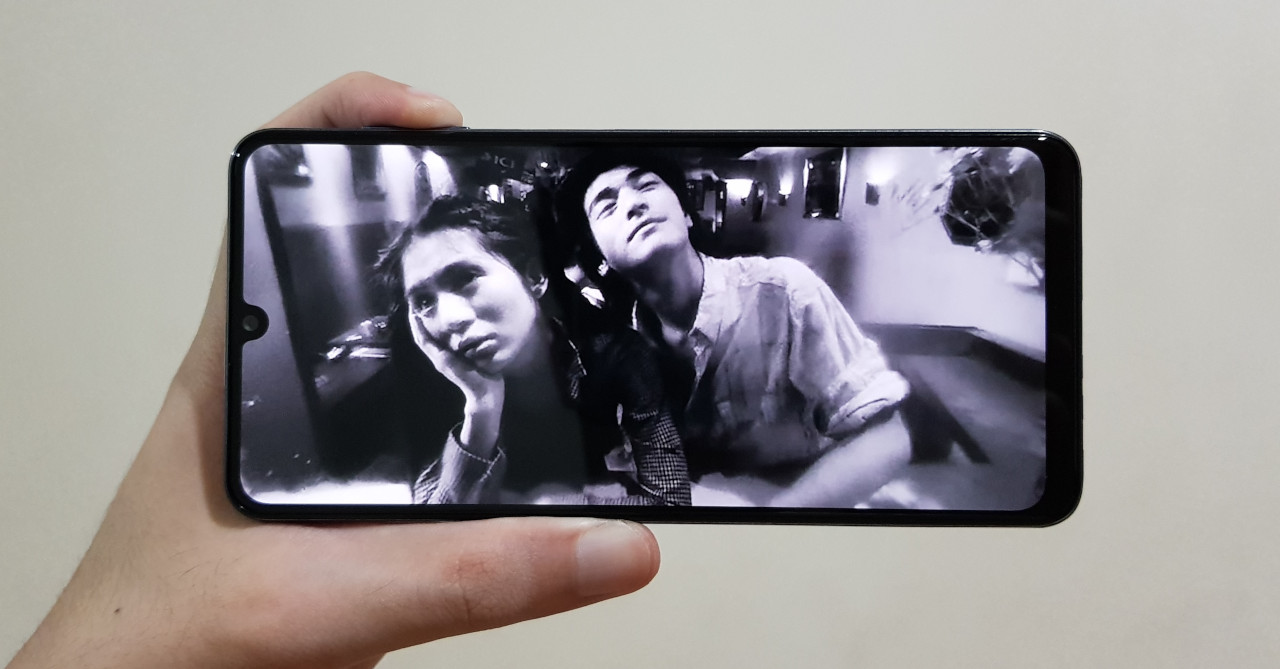 Speaking of its display, the Galaxy M32’s 6.4-inch screen is an AMOLED display, and has a Full HD resolution. Thanks to the high resolution and the vibrant colors plus deep blacks of the AMOLED panel, the M32 is an excellent partner for movie and TV show marathons. Given that not all phones in this price range have AMOLED screens, the Galaxy M32 makes a strong case as a smartphone for avid binge-watchers that are on a bit of a budget.

If you do plan on binge-watching on the phone, we recommend using external speakers or headphones which you can connect wirelessly or via the 3.5mm headphone jack. This is because the phone’s internal speaker isn’t the best. While it works well enough if you’re just watching a YouTube video in a quiet room, the volume doesn’t get loud enough for a satisfying viewing/listening experience (at least for me).

As mentioned above, the Galaxy M32 is powered by a Helio G80 processor paired with 8GB of RAM. While the G80 is a capable processor for gaming, it’s a fairly old SoC at this point. So, how does it hold up? For today’s popular titles, it has good performance still.

For example, League of Legends: Wild Rift ran at a smooth 60FPS on the Medium graphics setting. This means MOBAs and other games that are not too hardware intensive will run well on the M32; just make sure to turn down graphics settings to Medium.

For shooters such as Call of Duty: Mobile, the M32 can also run them smoothly at the Medium graphics settings.

First off, the phone’s 64MP main camera takes great photos in daytime, as well as indoors. Shots with ample light have great colors and have lots of detail. The image quality of photos taken by the main camera should satisfy most users.

Moving on to low light, the 64MP takes decent night shots on auto mode, though they are a a bit lacking in detail when zoomed in. But if you use the phone’s Night Mode, low light shots turn out much brighter and are much sharper. Remember to use Night Mode in these situations, especially as it does not deploy automatically in my experience, even when the AI scene optimizer is turned on.

As for the 8MP ultrawide, this camera is great for daytime shots, and still performs decently well for low light, provided that you use the phone’s Night Mode.

For the 2MP macro camera, the M32’s shooter performs around what you’d expect for a phone at this price point. Macro shots are decent, but only if you have enough light.

Finally, selfies on the 20MP are of good quality, especially given the phone’s price point.

Another thing I like about the phone is its OS. The M32 runs on One UI, an Android interface that I think is clean and easy to use. Though do take note that unlike A series phones, M series devices are not guaranteed to get updates for more than 2 years.

Finally, let’s take a look at the phone’s battery. The Galaxy M32 packs a large 5,000mAh battery, enabling it to run for well over a day on a single charge. In my time with it, I was able to stretch out its battery to almost two days on medium use. Even if you use it heavily, you won’t need to bring a power bank with you, especially when this phone is still new. 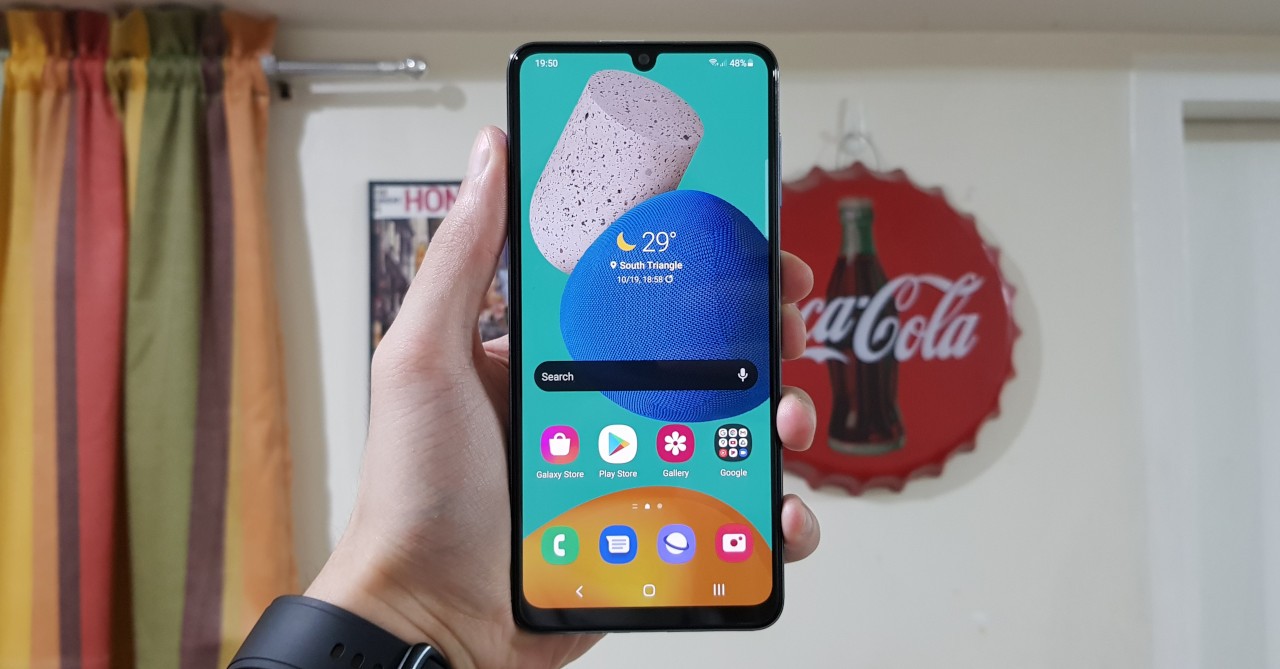 The Samsung Galaxy M32 is overall a good phone for users who love watching movies/shows thanks to its AMOLED display, and for those who prioritize long battery life with its 5000mAh battery. On top of these, the M32 can also play today’s popular games, and has a nice design to boot.

While it may not be the pound-for-pound best phone in terms of performance, at PHP 13,490, it’s worth considering for those in the market for a new affordable mid-range device.

- Advertisement -
Previous articleEternals is getting an early limited release in select Philippine cinemas on November 29 and 30
Next articleDemon Slayer: The Hinokami Chronicles free DLC adds Yahaba and Susamaru in the roster