This new sci-fi thriller releases on Netflix on December 24! 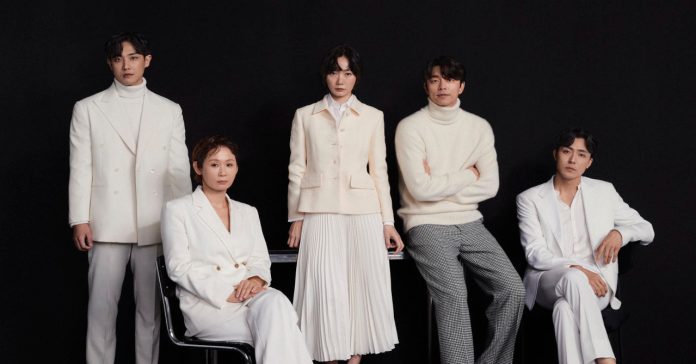 The Silent Sea is finally coming to Netflix this Christmas Eve, and the hype is very real with its interesting premise and star-studded cast. With a plot revolving around a dying Earth and a team tasked to save it, the first sci-fi K-series set in space is set to not only impress, but intrigue.

Just in case you missed our earlier announcements, the year is 2075, and natural resources running low have left the planet barren and devastated. The series follows an elite team sent on a mission to an abandoned moon base in hopes of finding a solution to the Earth’s rapid decay.

Director Choi Hang-yong shares his inspiration behind the project:

“The Silent Sea, actually, is based on my graduation work. When I was back in school, immediately before graduation, I really wanted to create something that was true to my passion. There were a lot of movies that depict the outer space, but not something that was literally and physically on the moon. So, I wanted to create a story with the backdrop being the surface of the moon, and during the research I found out that even though the moon is the closest to us, there’s not much that’s been revealed to us.”

Associate producer, Jung Woo-sung says that he was “immediately mesmerized” and fell in love with the short film that the series is based on.

The ensemble cast, composed of K-series heavy-hitters tell us their sentiments behind joining this series, how they internalized their characters, and how memorable the experience was.

Bae Doona plays Song Jian, an astrobiologist probing the cause of an accident leading to the moon’s Balhae research base five years ago.

When asked about how her thoughts upon joining the project, she says, “I think a Korean sci-fi is a big challenge, and I wasn’t quite sure if I wanted to take that challenge. But reading the script of The Silent Sea, I knew this was going to be great. So, I wanted to be up for the challenge. It could have the Korean sentiments, and it would give a lot of food for thought. There could be some social issues we could cover, and it could really intrigue the viewers and trigger our imagination.”

Gong Yoo assumes the role of Han Yunjae, youngest captain of the Space and Aeronautics Administration’s expedition team with a legendary reputation and a mysterious past.

In order to prepare for his role, Gong Yoo says, “You have to think about the history of the character. He is a former veteran, so I wanted him to have a more rugged and tough look to him. To be able to see how tough of a life he led through his appearance. So, I got a little bit tanned, and if you look at the tattoo he has on his neck, it’s an insignia of his former military unit. So, it’s not so much that I tried to create a “tough” appearance. I just wanted to hint at the history that you don’t see in the series.”

We have Lee Joon as Ryu Taesuk, chief engineer and former Ministry of National Defense elite. A selfless man who’d do anything for his crew.

Being a huge fan of the sci-fi genre, he tells us how he and the cast managed to have a lot of fun in spite of the difficulties that came with shooting the series. “Now that I look back at it, I don’t feel like it was that challenging. I remember all of the fun I had on set. I don’t think I’ve had this much fun on set. Because we were dancing a lot. It was like we were in a Bollywood movie. We were really dancing all the time, even wearing the heavy space suits with the backpacks.”

The ever-reliable “Hong Doc” is played by Kim Sun-young. She’s described as a team doctor who takes responsible for the lives of her crew.

When asked more about the role, she jokingly says, “I play the role of Doctor Hong who joins the team as a Genius Doctor. Someone who has that unique Korean sentiment.” She then doubles down by saying, “Yes, trust me. It’s not really shown often in the series, but in the script it said there, literally, that I was a genius doctor, so I’m holding on to that.”

He talks about how satisfied he is with his role, and how much he admires the differences there are between him and “Gong Soohyuk.”

“He’s a really cool person. Because if it were me under these dire situations, I wouldn’t be able to fulfill my mission. So, I think he’s such a wonderful, cool guy and I wanted to make sure to portray the coolness of this person. In order to do that, I had a lot of conversations with the director and the writer, and they incorporated my ideas into the project. So, I’m very thankful for that.”

While the press conference was very laid back, and had its fair share of humorous anecdotes, the series its promoting has the makings of a thrilling, unsettling tale that is sure to surprise us all.

The Silent Sea releases on December 24, 2021 exclusively on Netflix.