The PS Plus December 2021 game line-up is huge

Now this is quite the lineup! 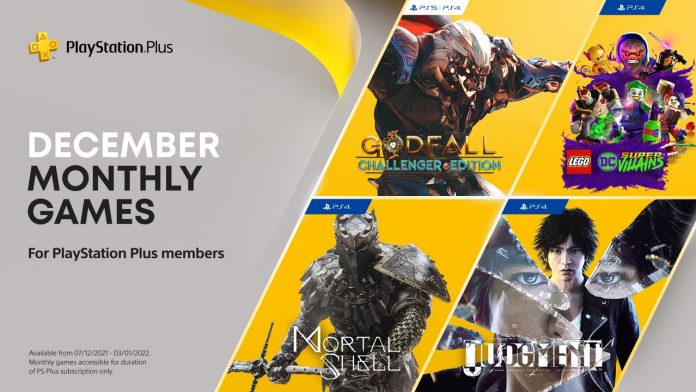 PlayStation is ending the year on a high note with their line-up of games for subscribers of PS Plus  for December 2021. Not only are they releasing four games for free this month, but this lineup will definitely pique the interest of gamers. This month’s lineup includes God Fall: Challenger Edition, Lego DC Super-Villains, Mortal Shell, and Judgement (with Judgment being an Asia-exclusive PS Plus freebie).

Godfall is one of the PS5 launch titles, and if you haven’t tried it out yet due to its less than stellar reception during its launch, now is a great time to do so. This multiplayer title features might also be worth getting thanks to the Challenger Edition’s endgame content which may make it a worthwhile grab. Plus, the game is compatible with PS4 and the PS5.

Perfect for the kids and kid at heart to play during the holidays is Lego DC Super-Villains. This game lets you play as Joker and other iconic Super-Villain from the DC universe and lets you leave a trail of destruction in every city you terrorize.

The brutal indie-game Mortal Shell lands as part of this month’s PS Plus line-up, making the December 2021 lineup even better. Taking heavy inspiration from Fromsoft’s Soulsbourne games but adding its own mechanics to the familiar brutal formula, Mortal Shell garnered positive reception from critics and players. Mortal Shell also received its first DLC last August, adding a whole new game mode to extend the playtime of the game.

This last game alone made this month’s subscription worth it, at least in Asian countries is Judgement (Judge Eyes), the Yakuza series’ spin-off title follows the investigation of private investigator Takayuki Yagami in his pursuit of serial killer roaming Kamurocho. The game was also well received and has a sequel titled Lost Judgment, so if you haven’t played the game yet, this is the perfect time to catch up.

- Advertisement -
Previous article
High Calibre is out now in Rainbow Six Siege
Next article
Rhesus & Memnon are coming to A Total War Saga: Troy on December 14