Here is the PlayStation Plus free games lineup for February 2022

Four games are up for grabs this February for PS Plus subscribers in Asia. 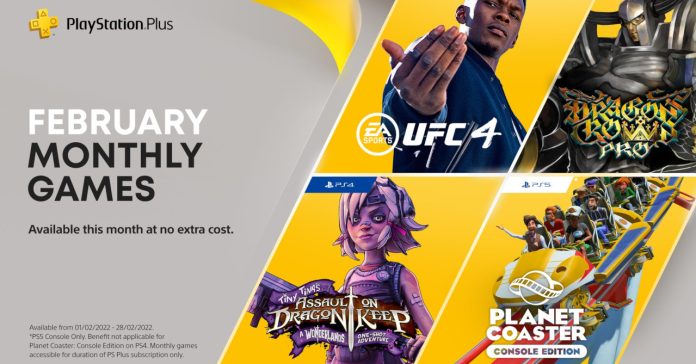 PlayStation has announced the PS Plus free lineup for February 2022, and the series in Asia includes four games: three for PS4 and one for PS5. Though in the West, only three games are available for free.

While the January 2022 lineup was quite an impressive one, the February PlayStation Plus free games are a bit more modest. And one of these games are available only for PS5 owners.

Here’s a quick rundown of the four free games for February:

First up is UFC 4, a mixed martial arts fighting game released in 2020. The game is the latest in EA UFC series, and it features your standard Career Mode, along with multiplayer modes such as Blitz Battles, and Online World Championships.

Next is Tiny Tina’s Assault on Dragon Keep, a previous DLC for Borderlands 2 which got a standalone re-release ahead of the launch of Tiny Tina’s Wonderland this year. The game is available on PS Plus for free on PS4. PS5 owners won’t be able to freely get the PS5 version, though they can still play the PS4 version via backwards compatibility.

As a bonus for PlayStation Plus subscribers in Asia, Dragon’s Crown Pro is also available for free in the region. This beat em up was originally released back in 2013 for the PS3 and the PS Vita, and it got a PS4 re-release in 2018.

Finally, we have Planet Coaster: Console Edition, a theme park management simulator. The game is only available for free on PS5, though PS4 owners can claim the game on the PlayStation App in case they want to play it when they get a PS5 down the line.

These free games will be available to download for free until February 28, 2022.