WATCH: Netflix releases main trailer for All of Us Are Dead

Catch this Korean zombie series on Netflix when it premieres on January 28! 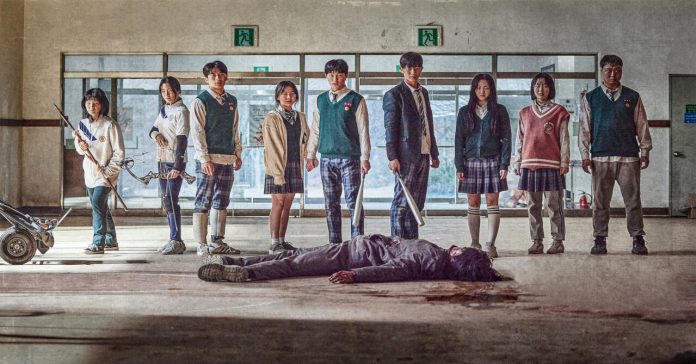 Netflix just dropped the main trailer for All of Us Are Dead, and it’s looking pretty hype in every sense of a gory, intense zombie apocalypse series.

The show is based on on the popular Naver webtoon originally named Now at Our School, created by Joo Dong-geun. The webtoon had a 5-volume run between 2009 and 2011.

Everything starts out normal enough, just like your usual run-of-the-mill K-drama. However, the situation goes from zero to a hundred after a mysterious viral infection ravages a high school. There’s a lot to speculate on, with several set pieces being shown throughout the trailer. With the authorities seen getting involved, conspiracies afloat, and the local populace simply trying to survive, this are, indeed, looking pretty dire–and we can’t wait to see more.

Also, the nice little reference to that one other great zombie film was a nice touch.

Along with the trailer, Netflix also released character posters for the upcoming series:

The show was directed by Lee JQ and Kim Nam-su, with the story written by Chun Sung-il. Overall production was handled under Film Monster by JTBC Studios.

All of Us Are Dead will be available for streaming via Netflix on January 28, 2022.