Here is the PlayStation Plus free games lineup for March 2022 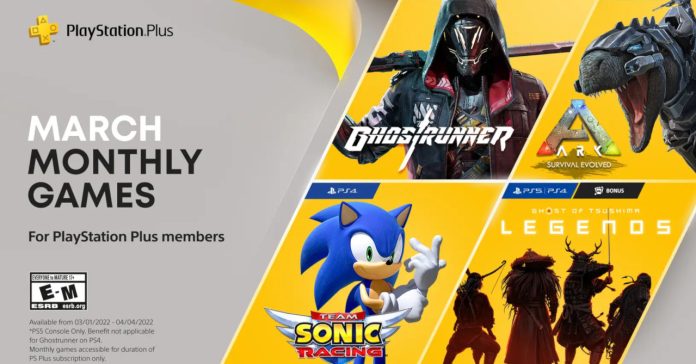 Sony has just announced the PlayStation Plus free games lineup for March 2022, and it includes four games.

While last month’s free lineup had four games as well, the March 2022 free games for PlayStation Plus subscribers is arguably a more interesting one, especially with the addition of Ghost of Tsushima: Legends.

First off though is ARK: Survival Evolved, an action survival game which was originally released back in 2017. In this game, you awaken in a mysterious island and must adapt to survive the hostile environment filled with dangerous dinosaurs. Though as you gain more skill, you’ll be able to kill, and even ride these dinos.

Available for free only for PS5 owners is Ghostrunner, the cyberpunk action platformer which released for the PS5 last September 28. In this game, you are equipped with a katana, and various superhuman parkour abilities. But you’ll need to master these in order to progress as Ghostrunner features a one-hit one-kill mechanic.

Rounding out the free games lineup is Ghost of Tsushima: Legends, the standalone multiplayer expansion for Ghost of Tsushima. This game will be available for both PS4 and PS5 owners with active PS Plus subscriptions this month.