OlliOlli World Review | Getting Into the Zone

A unique and fun platformer that's well worth checking out! 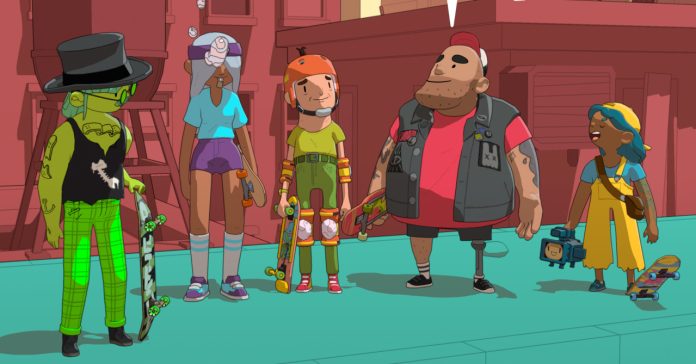 A few weeks ago, we shared our impressions of OlliOlli World based on the first main areas of the game. Now that the game’s release is only a few days away, we are finally able to give our verdict on the whole game.

Before we get started, here’s a quick rundown of OlliOlli World in case you missed its announcement. OlliOlli World is a skateboarding platformer by Roll7 — the studio behind OlliOlli and OlliOlli2: Welcome to Olliwood, both of which released for the PS Vita back in 2014 and 2015, respectively. 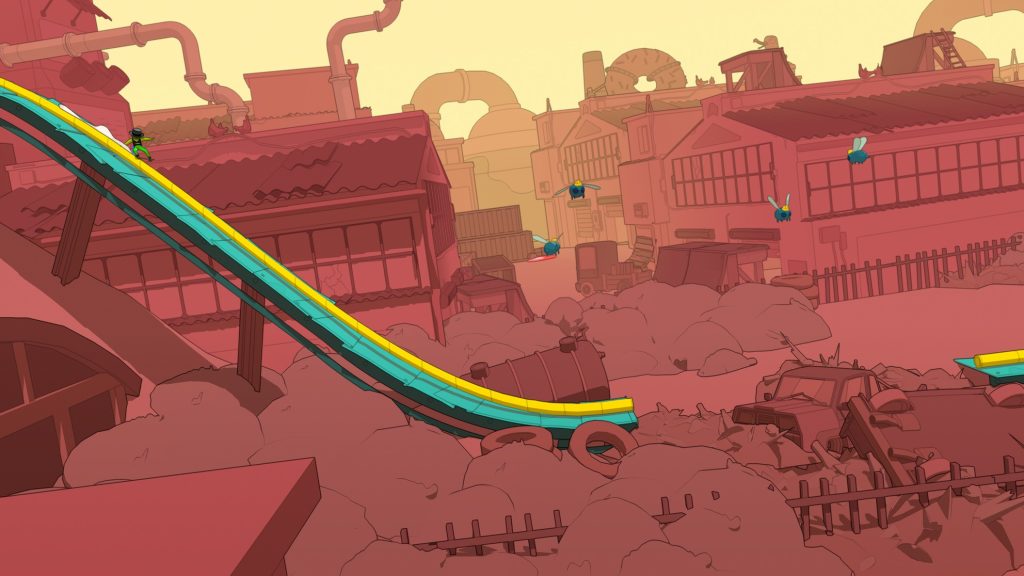 While OlliOlli World is a follow-up to the two aforementioned games, it sports a new look, as well as more complex tricks, all while promising to be accessible even to newcomers and those who don’t usually play platformers.

I’ll have to admit, when I first tried a demo of the game last year, I didn’t have the best time given that I’m not great at platforming games. But after getting to try the game again last month, I had more fun as the game clicked after some time. Now, after finishing the main levels, I can safely say that OlliOlli World is a fun game that strikes a nice balance between accessibility and challenge.

Approachable without being Casual 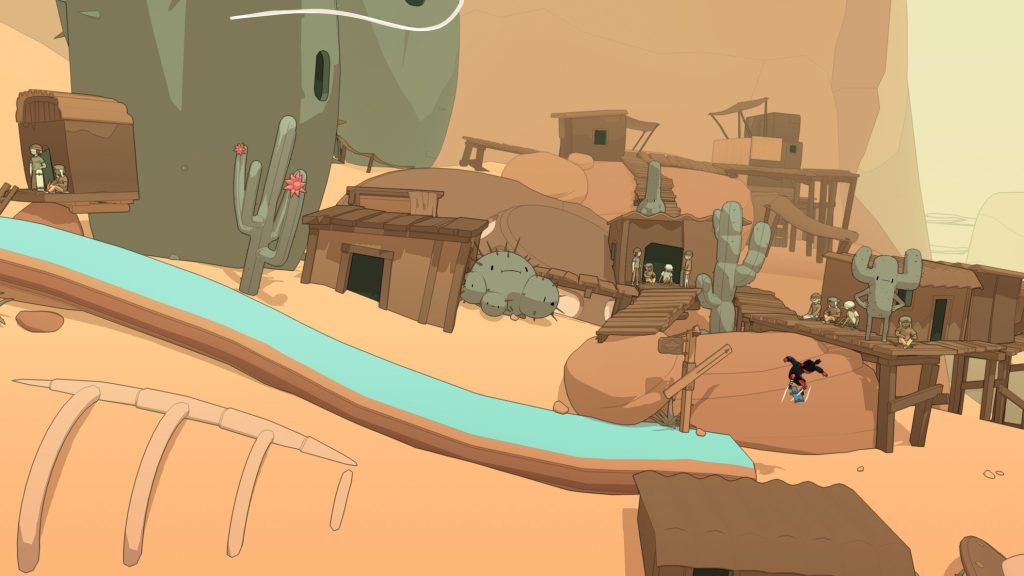 The first OlliOlli games were well-received critically, though they were quite punishing, especially in the later levels as failing a level means you have to start from the beginning. But with OlliOlli World, the game is far more accessible, all while retaining the complexity and challenge that you’d expect from an OlliOlli title.

How OlliOlli World plays is that you’ll need to push your skateboard using the A (or X button on PlayStation) button to gain momentum so you can perform tricks. When you have momentum, you can jump through obstacles by flicking the left analog stick. Depending on the direction that you flick, you can perform different tricks; you can even do complex tricks by circling the analog stick. As you progress though, the game introduces more abilities, including grinding, wall-riding, and more. You can even perform manuals in the later stages.

Given the speed that you need to jump through the various obstacles, you’ll need to be quick in performing and chaining together tricks if you want to get through levels. Coupled with the fact that there are a lot of tricks to perform and types of obstacles to get through, OlliOlli World in indeed a challenge, especially in the later levels. Thankfully, there are multiple things that Roll7 did to make the game feel rewarding instead of frustrating. 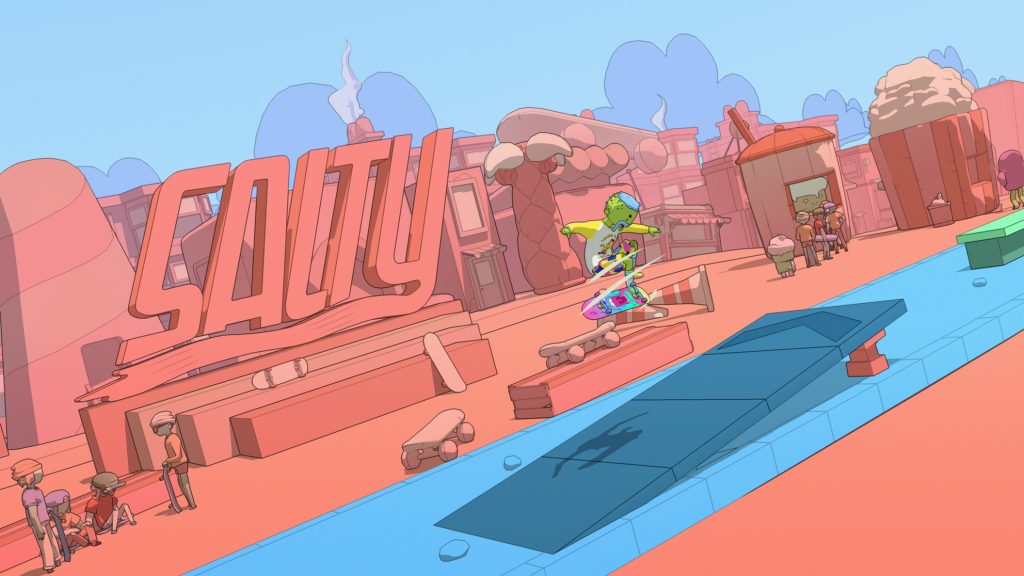 One of these is the generous amount of checkpoints per level. As we explained in our impressions, the levels have lots of checkpoints, so you don’t have to restart the whole level if only one particular jump is a challenge. What’s even better is that restarting from the checkpoint is near instant, so you won’t have to wait to try again.

Another way that OlliOlli World is made more accessible is the perfect pace in which tricks are introduced. Each of the game’s biomes (or worlds like in Super Mario) typically introduce one new trick that you must master as the levels progress. Each level also has a gradual curve in difficulty, meaning earlier levels in biomes are fairly simple, though later levels require you to have more mastery. Given this, there were no times where I felt stuck while playing. 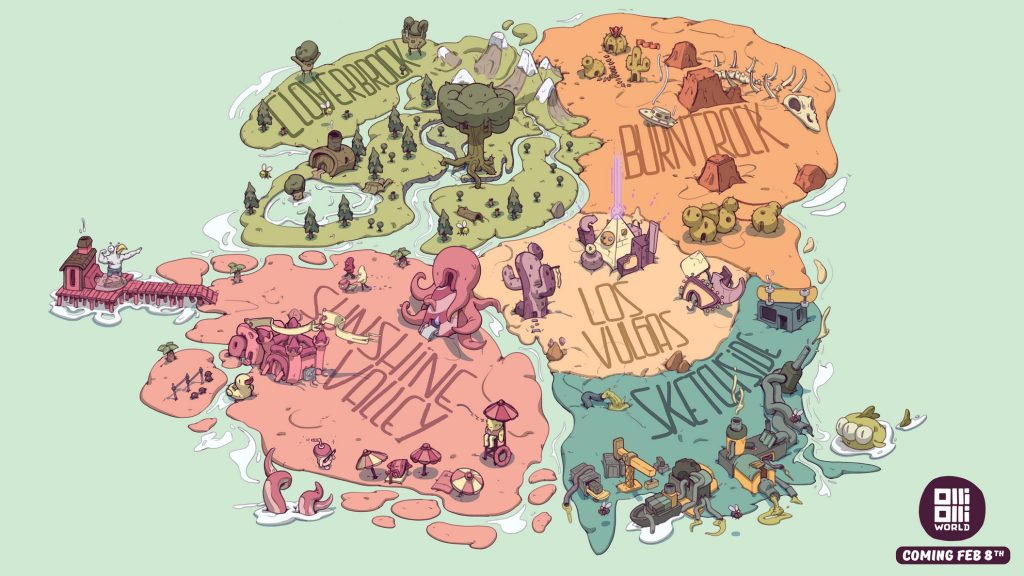 As OlliOlli World is a more accessible title, I found myself finishing the game fairly quickly. You might think that the game is short, but make no mistake, OlliOlli World is highly replayable, and it will give you hours upon hours of playtime.

While I technically beat most of the levels (as I skipped some optional ones), I only got the high score a handful of times. This is because getting a high score in each levels requires you to play perfectly, landing all the right tricks from start to finish without restarting from a checkpoint. You’ll need a lot of practice to get in this flow state to perfectly finish levels, but boy is it rewarding, especially as you get cool rewards by doing so. 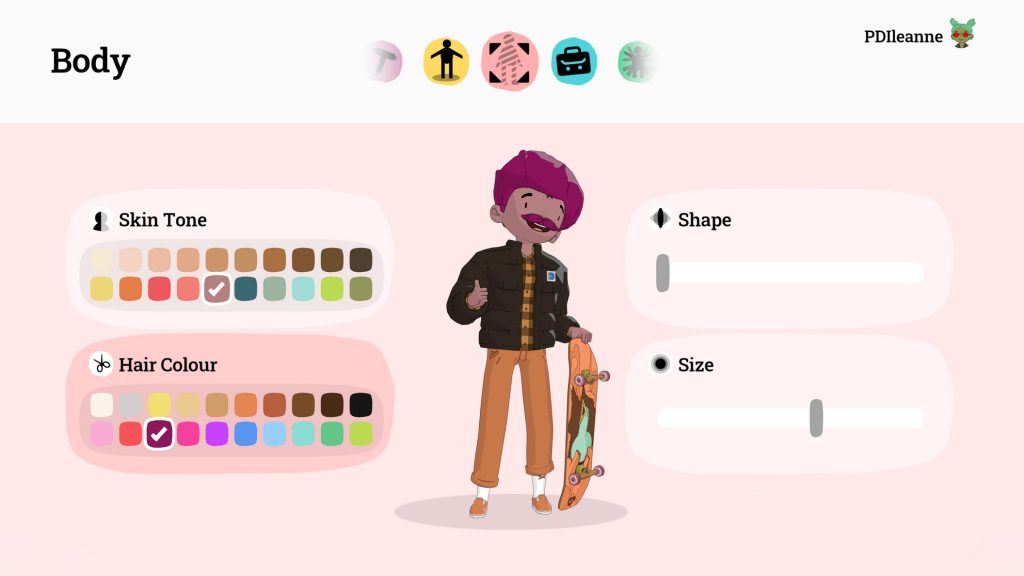 The game features an extensive character customization feature, so you can create a wholly unique character for yourself. While there are lots of clothing and accessory options, you can unlock more as you get high scores in levels. This gives players more incentive to replay levels until they get it perfectly.

Another thing that makes levels more replayable is that all of them have optional objectives. For example, some levels require you to pop a certain number of things, and doing so will give more rewards. On top of these, some levels also have side quests where going through a different path will let you meet an NPC and do a quest. When this side quest is done, more rewards are up for grabs. 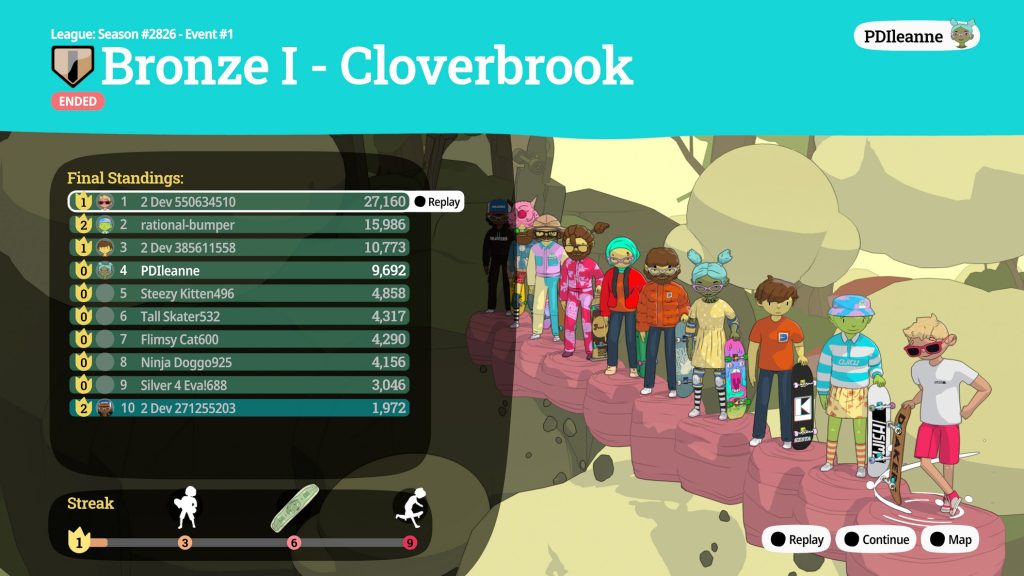 Then there’s the game’s multiplayer feature. The first is the Gnarvana League where you can compete with players from all over the world to get the highest score in levels. This is a league-style asynchronous multiplayer mode that will no doubt bring out the competitiveness of some players.

Personally, I’m not into this league type mode, so I found the other multiplayer mode more interesting. The Gnarvana Portal is a mode where you can modify your own level and share it with friends. It’s not a full level editor, but it does let you select the biome, difficulty, and more. Plus, you can share your level and engage in friendly competition with friends.

Whichever multiplayer mode you prefer, these modes add even more replayability to the game. For skateboarding and/or platforming game fans, OlliOlli World will surely give dozens, if not hundreds of hours of playtime. 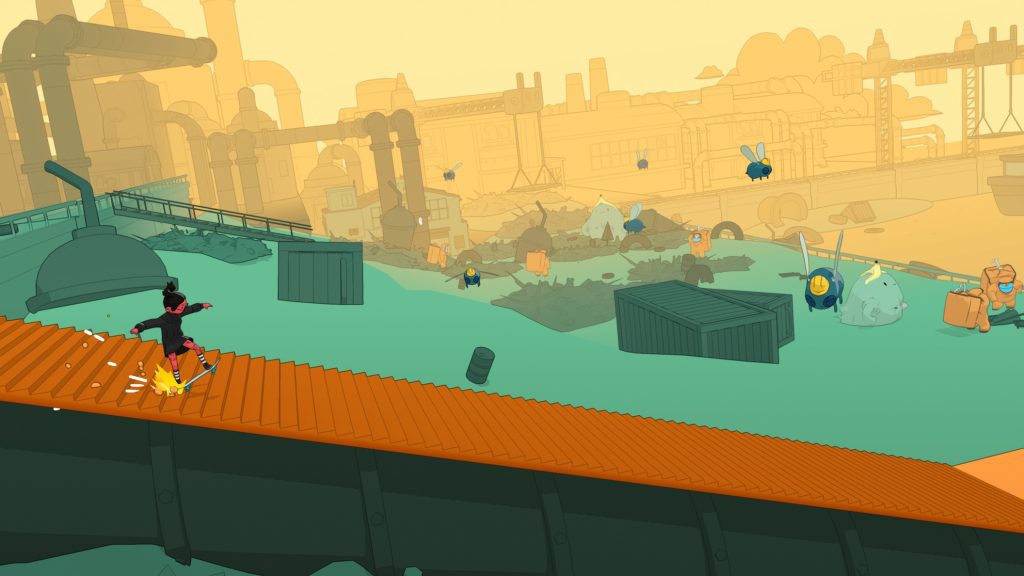 The game will release on PlayStation, Xbox, Switch, and PC. We reviewed this game on a near six-year old gaming laptop, and it ran incredibly smoothly. This might not be surprising given 2D platformers are rarely hardware intensive, but it’s nice to see OlliOlli World perform well even on older hardware. Given how well it performed on older hardware, it should run smoothly on all other consoles, as well as on non gaming laptops. Plus, it doesn’t just run well on old hardware, it also looks great too which is a testament to the game’s great art style.

Aside from running well, OlliOlli World just felt great to play. The game feels responsive, and once you get used to the controls, performing tricks will feel natural. This is important, especially in a platforming game with a fast pace such as this game. 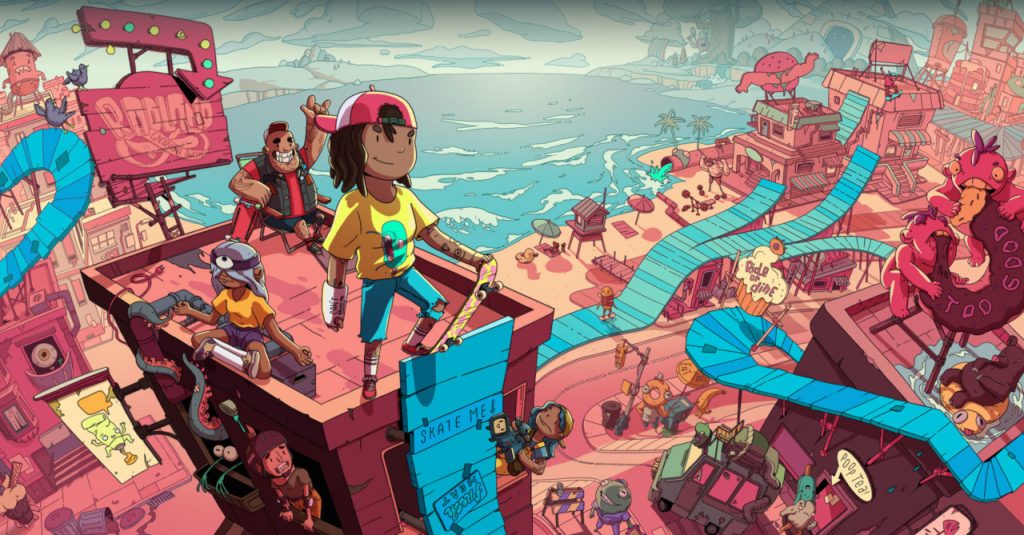 Thanks to its great mix of unique gameplay, great aesthetic, and challenging yet accessible levels, OlliOlli World is a game that’s well worth playing, especially for gamers who are on the lookout for a new platformer. While the gameplay may take some time of getting used to, once it clicks, you’ll no doubt be grinning from ear-to-ear when you get into the zone and nail each level like a skateboarding god.

OlliOlli World is a fun mix of skateboarding and platforming that, while challenging, is still accessible enough to make playing it more rewarding than frustrating. And while it may seem short at first, it the game more than makes up for this with its high level or replayability. OlliOlli World Review | Getting Into the Zone