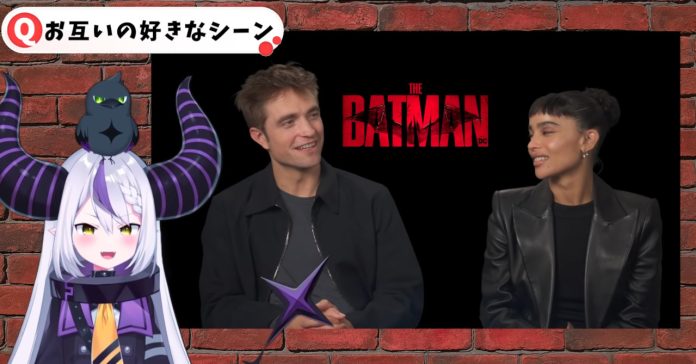 While it’s a quick interview, Laplus was able to ask some fairly interesting questions to Pattinson and Kravitz, including which of the scenes in the movie is their favorite as well as how the costumes for it felt to wear.

You can check out the full interview here (no English subtitles yet for the questions though):

Not familiar with the interviewer? Laplus (or La+) Darkness is a Virtual YouTuber under Hololive, a VTuber agency based in Japan. Laplus is part of Hololive’s sixth-generation of VTubers called Secret Society holoX which debuted last November. Laplus being chosen to interview The Batman stars is quite a surprise, but it makes sense as she is noted for being a big fan of DC.

As for the movie, The Batman is the latest film starring the caped crusader, and it is directed by Matt Reeves. This latest Batman movie is a reboot and is not part of the DC Extended Universe.

In our review of The Batman, we called the movie “a refreshing new take on a classic hero, and gives us a closer look at a phase in Bruce Wayne’s life that hasn’t been given much exposure on the big screen.”

- Advertisement -
Previous articleElden Ring speedrunner beat the game in under one hour
Next articleShopee celebrates 3.15 Consumer Day Sale with Top Celebs and Over 8M worth of Prizes