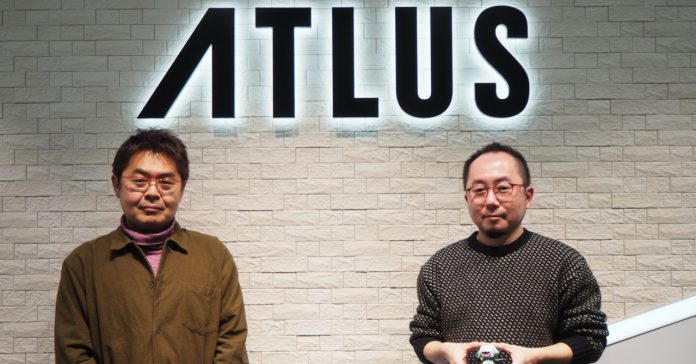 In case you wanted to know more about the game, here is an interview with Soul Hackers 2 producer Eiji Ishida and director Mitsuru Hirata where they share about the game’s world and systems.

[NOTE: This interview with the developers was conducted by ATLUS and was shared with us via a SEGA press release]

About the Soul Hackers Series

Hackers. The immense world concept and background of the series stays true to the original Shin Megami Tensei series. There’s our human society that we are all too familiar with, but there are also Demons. There are many deep layers to society, but the layers to the Demon world are too deep to comprehend. This is where the story of Soul Hackers begins to unfold. It is a story of humans and Demons.

In the Shin Megami Tensei series, the player sees the destruction of the world from a wide point of view. However, In Devil Summoner and Soul Hackers, this point of view is narrowed down. Society and individuals are now the focal point and the events of the story unravel in just a single town. The Devil Summoners get together to rescue the town, playing the role of investigators.

Furthermore, Soul Hackers revolves around three key elements: people, technology and the occult. When SMT was released 25 years ago, the internet was just taking its first baby steps. Back then, thoughts of how the networking industry could become the cornerstone to facilitate modern development and play a vital role in our lives captured our imaginations. The concept of summoning Demons with a device dates back to the 90s.

This relatable theme of the occult and technology is what made the game so appealing. 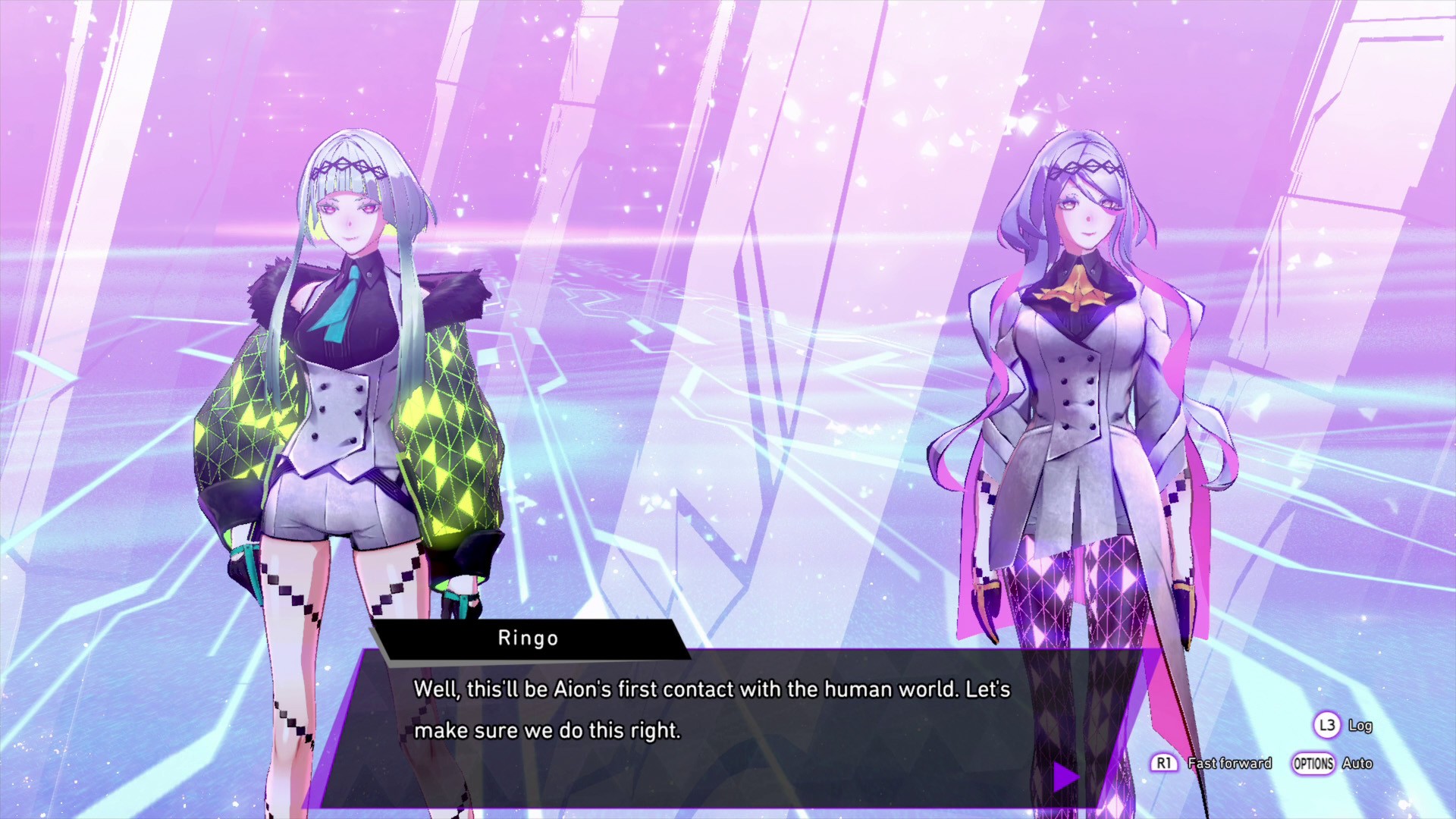 Depicting The World of Soul Hackers 2

Ishida: It’s been 25 years since the release of the last Soul Hackers game. Nowadays, technology is a normal and essential part of everyday life. That’s why I thought portraying technology as a threat to the humanity is somehow inappropriate in present times. Although I tried many ways to steer the storyline based on the evolution of technology, all my efforts soon came to a standstill. That’s why we decided to put the characters and dramatic interactions between humans at the heart of the story.

That’s when I thought, what if the main character isn’t a human, but some kind of intelligent form of technology that transcends all existence, such as a lifeform that is born to observe the human race? How’s that for a story?

Hirata: There are so many films and stories out there that heavily revolve around the question of whether an artificial intelligence has a soul. Although the subject is rather philosophically intriguing, we decided to not go down that path because we wanted to give our audience a taste of something more unique. The theme we went with for Soul Hackers 2 is rather different.

Although Devil Summoners have the power to summon Demons, they experience feelings such as regret and worry, just like normal people. How does an AI judge these beings? This is the theme we wanted to focus on.

Ishida: The protagonist is a clone of the player. Although the protagonist in Soul Hackers 2 is a form of technology that transcends life, letting players immerse themselves into characters who lack any kind of emotion would be pretty much impossible. Therefore, we created the concept of avatars and that’s where Ringo and Figue come in. They have personalities and can speak from their own perspective. These nextgeneration lifeforms were born from Aion. They are not like those characters who are smart and give orders to the players, but rather draws closer and closer to the characters of the story. The way they speak is, however, rather cheeky. (laughs)

Ringo and Figue contrast each other. Ringo’s outlook on life is rather philosophical, whereas Figue can sometimes be overly empathetic. As the story progresses, their outlooks change, which is an important part of the storyline. Although you would expect them to have the same personality, since the same AI created them so that it could make a variety of decisions, they are completely unique from each other and have been dispatched as different avatars of the same entity. It is from this point that the story unfolds.

The main character is female. This is quite uncommon for the Shin Megami Tensei series. Along with the setting of the game, we want to keep switching things up on Atlus games and try things we have never tried before. We hope our players enjoys these changes to the game. 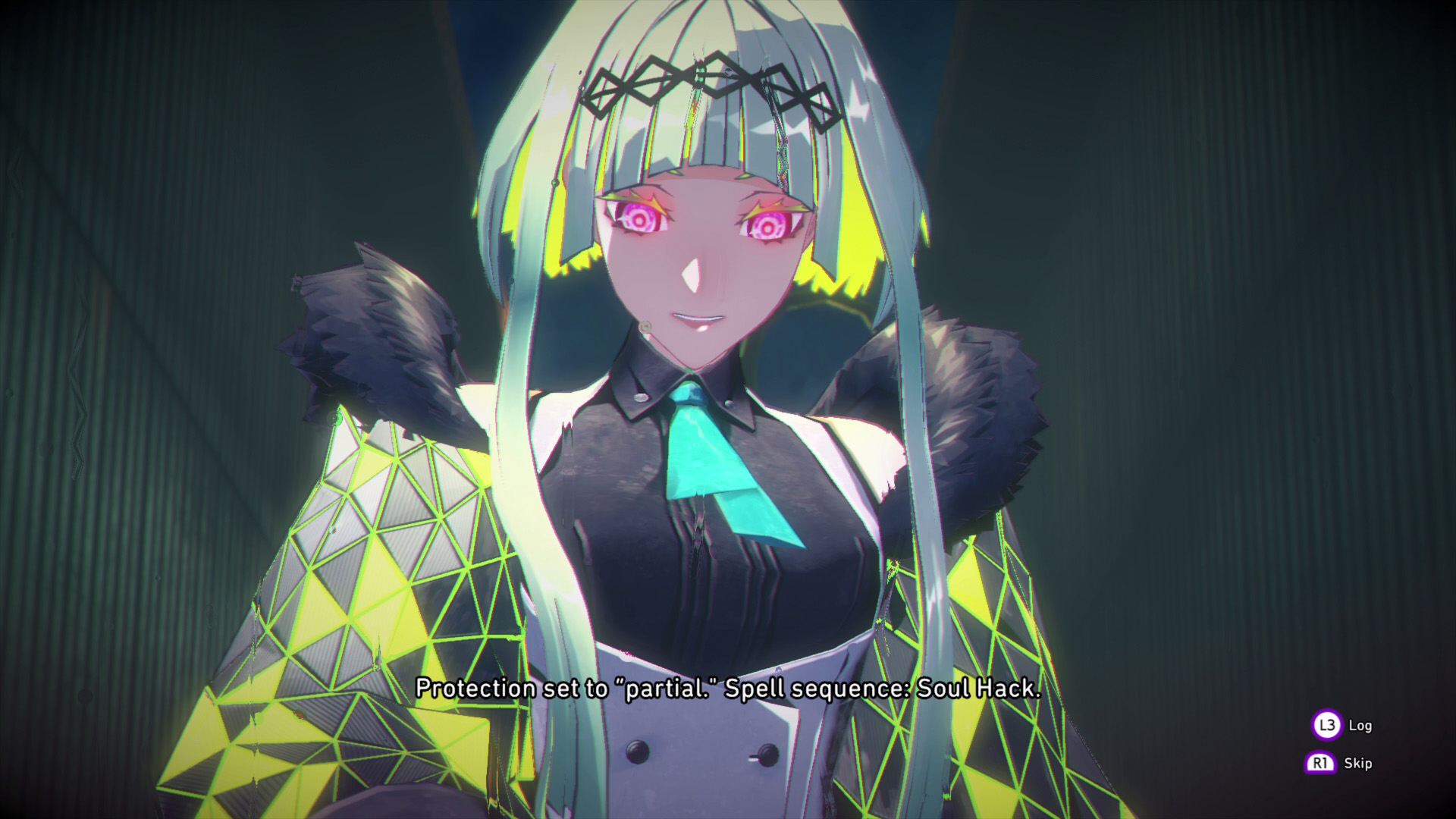 Ishida: Another important detail is the beliefs and backgrounds of characters. We wanted to touch on the opposition between the two Devil Summoner organizations Yatagarasu and the Phantom Society.

These are the areas we hadn’t touched upon.

Although the plot depicting crushing one side as a symbol for evil seems interesting, it is not a modern-day story. The story of Soul Hackers 2 focusses on the attitudes that the Summoners have towards life and is a drama involving friends. This is precisely what makes this more than just a sequel to the series and elevates

Soul Hackers 2 to being a completely new work in itself.

Hirata: Throughout the entire SMT series, many Summoners that are not on the protagonist’s side have had interesting stories. We wanted to continue with this idea that you don’t just destroy your opponents but dig deeper into their compelling stories. Therefore, we created a storyline where some members of opposing organizations cross organizational boundaries and join forces to fight side by side. This storyline enabled us to elaborate on each character’s background in much detail.

Ishida: With Ringo and Figue at the heart of operations, Arrow from Yatagarasu, Milady from the Phantom Society, and the free agent Devil Summoner Saizo put their differences aside and stand together on the front line to fulfil a certain goal. There are scenes of them sitting around the table together to share a meal or engaging in some good old banter with drinks at a bar. As they get to know each other, there are times that they gain a deeper understanding of each other. At other times, they clash heads. Whether it’s someone missing at the table or someone who decides to walk a different route back than the others, the scenes we show represent the subtle developments in their relationships. We hope that our players notice these subtle changes.

Character Designs by Shirow Miwa with Music by MONACA

Ishida: This is the first new Soul Hackers game in 25 years. The challenge was to uphold the key elements of the series while introducing completely new aspects.

Our character designer Shirow Miwa created fan art of Devil Summoner characters before. From hardcore male characters to the adorable female characters and fierce older characters, Miwa’s designs were very compatible with Atlus’ themes. Miwa did ask us if we intend the designs to resemble those of previous installments in the series, however, we did not. We preferred to go with what Miwa had in mind. This is because the staff working on the previous games had created character designs based on their own ideas and whatever they were influenced by at the time. 25 years later, if we were to try to copy that style, our designs would be missing two important things – originality and our soul.

It was from this notion that Ringo and Figue were born. The main character is a young female and is rather radiant. I personally believe that these kinds of unique characteristics for Devil Summoners is wonderful! As the performance of gaming consoles has dramatically improved since the start of the series, I think this enabled us to really capture Miwa’s character illustrations. We also redesigned the Demons based on Miwa’s illustrations.

Hirata: We were totally right to assume that MONACA, the professional music studio, was capable of creating a wide range of songs fit for anything. We were looking for musical compositions that could portray the different themes of the game, for example, storylines that put the spotlight on complicated relationships, the latest technology and the concept of God and Demons, and MONACA was the perfect fit.

For the music production, we provided MONACA with information on the theme of the game, scenarios from the storyline, and characters so that they could get an image of the kind of atmosphere we were looking for. 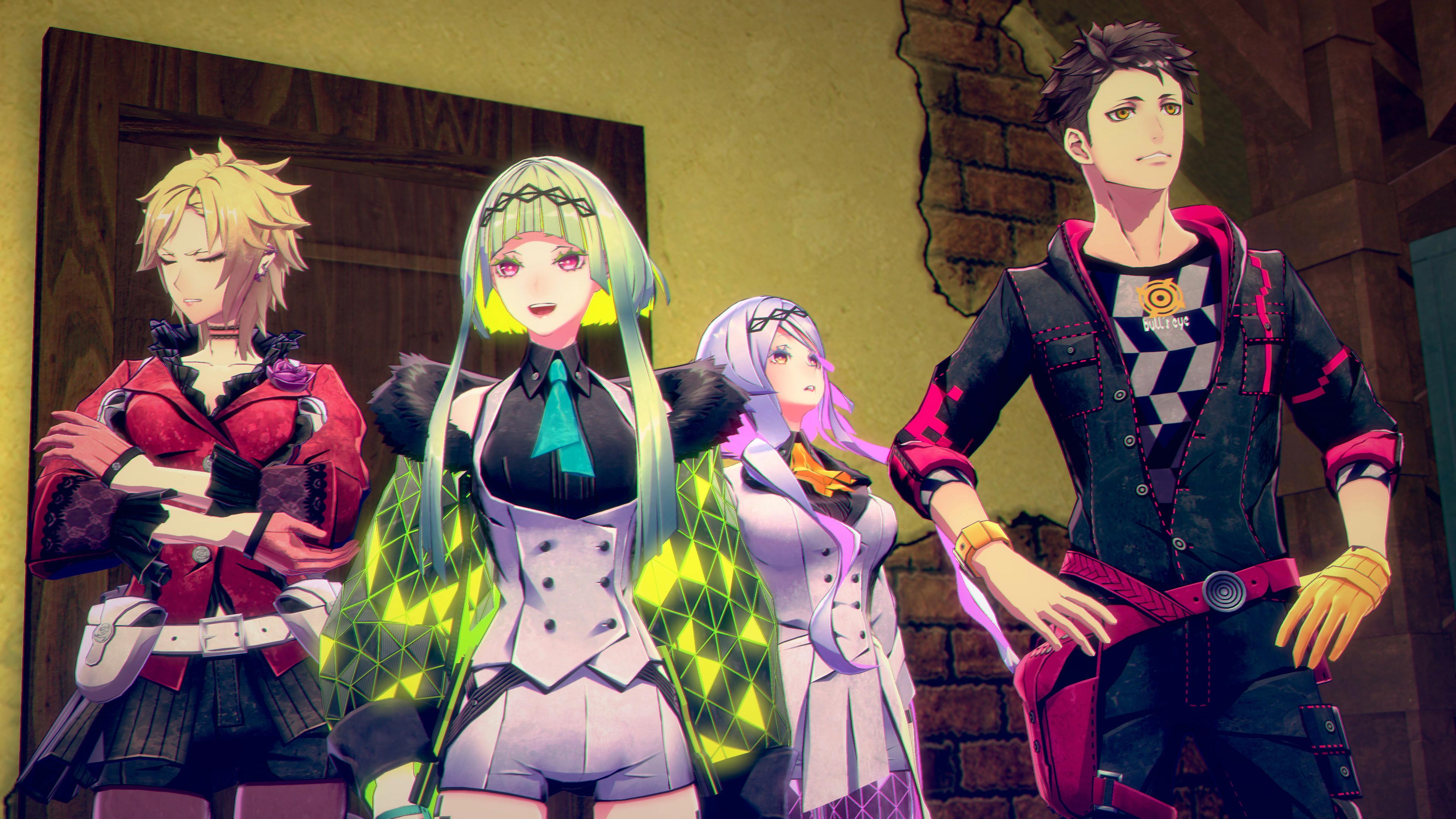 Game Systems that Players Can’t Get Enough Of

Hirata: We had to think about how we were going to implement this new drama storyline into the game system. We wanted this new type of Devil Summoner to fit well into the game system. That’s when we came up with the new COMP device that lets Devil Summoners summon Demons. In this game, we focus on the COMP device’s function of managing Demons in various ways. It’s not just something you can equip but also a weapon with a wide range of uses.

Luckily, our players seem to really enjoy Atlus’ signature Press Turn System, so we based the battle system of this game on the same system. This battle system rewards players for targeting the enemy’s weaknesses, and we thought that sticking to this system would make the experience more enjoyable for Altus game fans.

Of course, there are also new features in this game, for example, Sabbaths. This is a battle system where you can summon your stocked demons to deal immense damage. This function was created with the intention of allowing you to summon all of your demons for a full-scale assault. Our designers and programmers worked hard to make it come true. After experiencing that exhilarating feeling of summoning your army then unleashing everything you’ve got, I think we can all agree that it was well worth it!

Ishida: The battle system of Soul Hackers 2 isn’t about summoning Demons to fight, but rather, Ringo is at

the core of operations and the other characters join her party to fight alongside her. As this new system does not involve the player giving commands to Demons, we had to take an extra step to preserve the exciting usage of Demons in gameplay. We made sure to implement lots of scenarios where you also fighting alongside your Demons. It’s possible to summon a large number of Demons if you succeed in hitting an opponent’s weakness, and we put a lot of effort into showing these sorts of aspects to our players. For example, we even have a scene where Jack Frost rolls around. I’m sure fans will really appreciate these sorts of animations.

Ishida: Soul Hackers 2 carries on from the previous games in the series, but is also a brand-new game released 25 years after Shin Megami Tensei: Devil Summoner: Soul Hackers. It builds on the foundations set by Soul Hackers but is also a completely new game. You can enjoy this it even without having played its predecessors, so please, give it a go!

Hirata: We’re releasing this as a brand-new game, so keep an open mind while playing. If you are a fan of Ringo, the game’s visuals, and worlds where you can interact with Demons, this game is definitely for you, so be sure to try Soul Hackers 2!