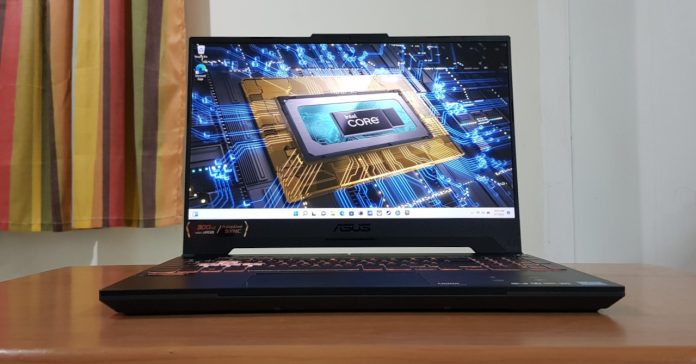 When choosing a gaming laptop, most people probably prioritize the GPU above all else. After all, a graphics card is the key indicator of how fast a game can run. Though a GPU isn’t everything, as a good gaming laptop should also have fast memory and storage, as well as a capable CPU.

Earlier this year, Intel launched its 12th Gen Intel Core powered laptops, and they promise a true generational leap in performance over previous-gen CPUs. This is thanks in part to the new architecture which combines powerful Performance cores (P-cores) and smaller Efficiency cores (E-cores).

Without getting too deep into the technical stuff, this new architecture promises to bring both faster performance and better efficiency. These claims have been backed up by various 12th Gen mobile reviews, and the new generation of Intel CPUs have gotten a lot of hype from both tech reviewers and enthusiasts. 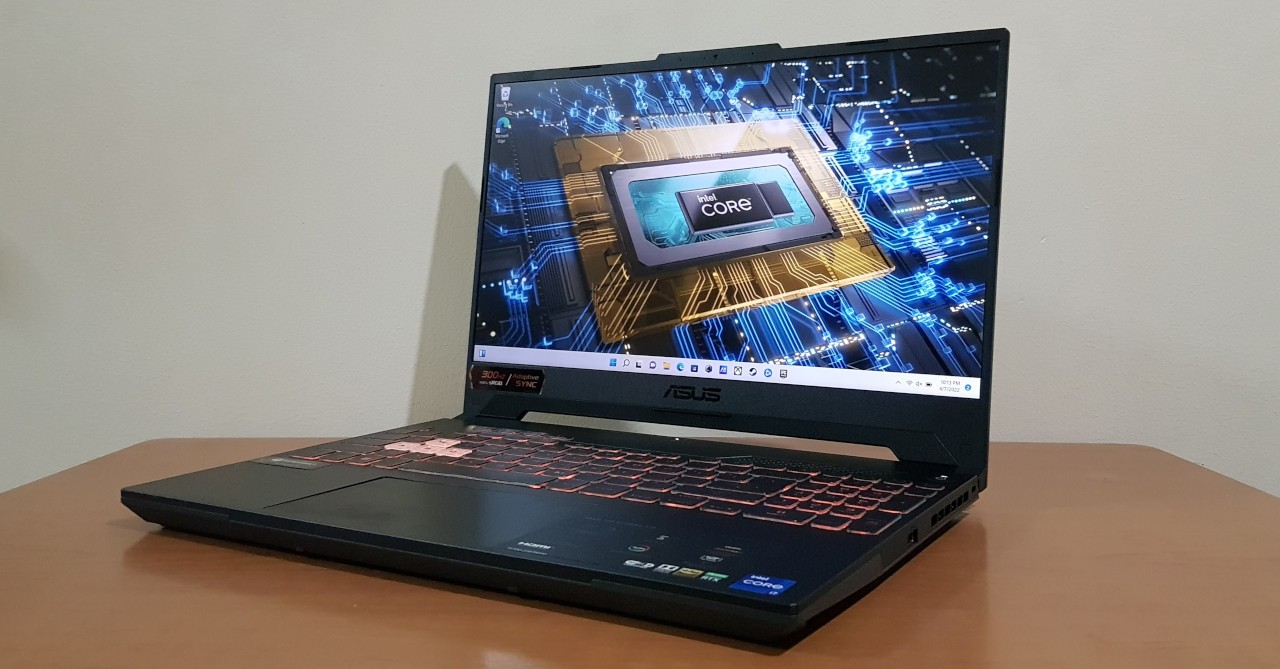 Given the hype that the new 12th Gen Intel Core chips have gotten, we’re taking a look at how they perform when it comes to gaming, productivity, and battery life, especially when compared to previous generation chips from both Intel and AMD. Specifically, we’re going to be reviewing the Intel Core i7-12700H which powers the new ASUS TUF Gaming F15. The laptop also has 16GB of DDR5 memory, as well as an NVIDIA RTX 3060 6GB GPU with a 140W TGP.

NOTE: We’ll be comparing the performance of the i7-12700H to a Ryzen 7 5800H-powered gaming laptop with an RTX 3060 130W TGP graphics card that we’ve already reviewed. But comparisons between the laptops aren’t definitive as they are made by different manufacturers, not to mention that the TUF Gaming laptop in our review has an RTX 3060 GPU with a higher TGP.

With that out of the way, let’s dive right in!

To start off, let’s take a look at the gaming performance of the 12th Gen Intel Core i7-powered TUF Gaming laptop:

As you can see, the i7-12700H and RTX 3060 is a combo that works well for esports titles at max graphics settings, as well as triple-A games at high settings with RTX on. Though for Dota 2, we tested the game with a 120FPS cap to better match our comparison.

Meanwhile, here are the benchmarks of the Ryzen 7 5800H-powered laptop:

As you can see, the Intel-powered laptop has slightly higher scores across the board, except in Control. Though our Control test for the Intel laptop wasn’t ideal as the framerate was capped at 60FPS, so it’s likely that there’s more performance to be gained on the Intel laptop. Also, we did mention above that the TUF Gaming laptop with an Intel GPU has an RTX 3060 with a slightly higher TGP, so that may explain the higher average FPS results.

Meanwhile here are more gaming benchmarks, this time with Hitman 3 and Cyberpunk 2077, both of which are more demanding to the CPU compared to the other games: 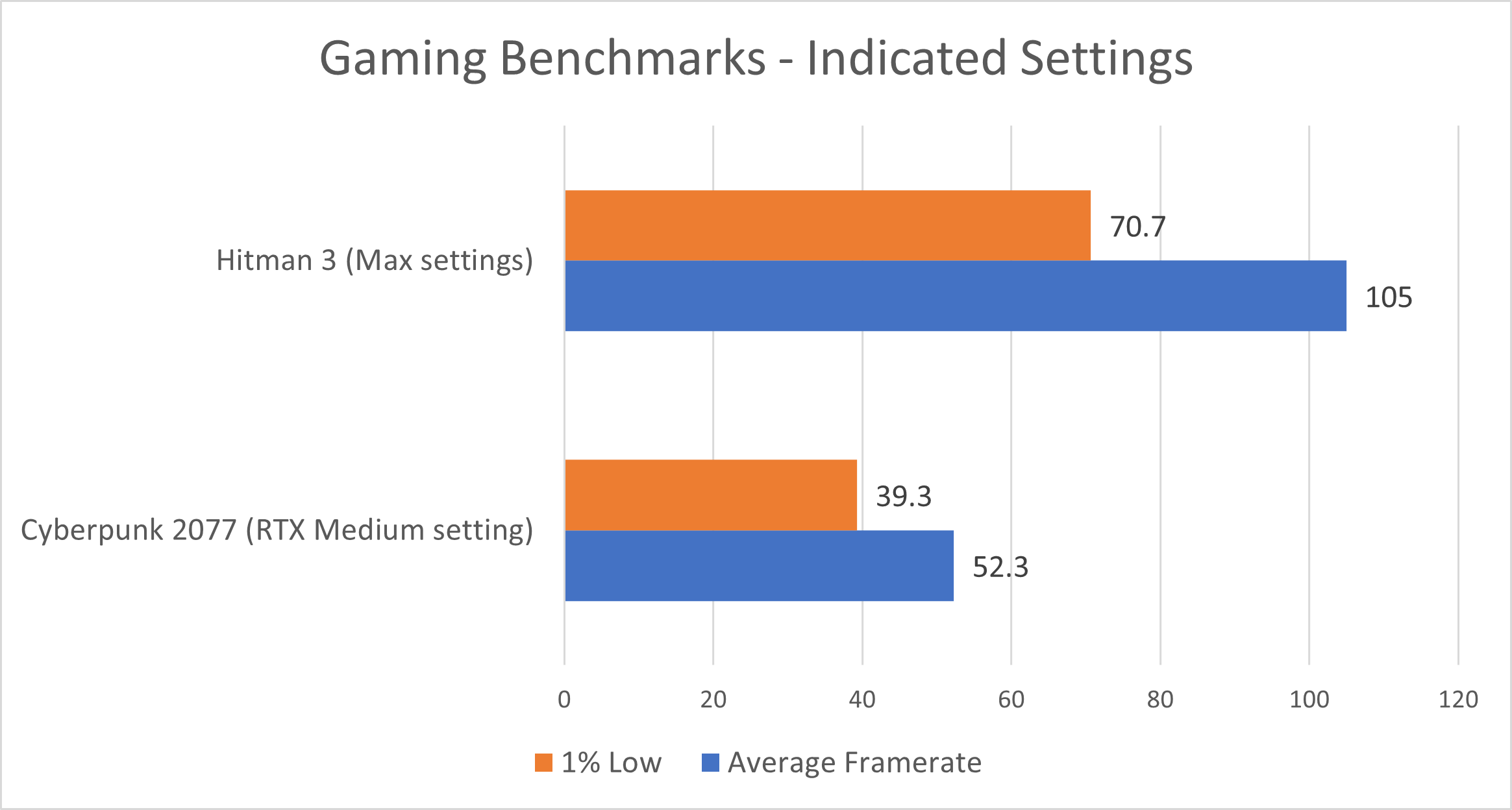 Average FPS isn’t everything when it comes to determining CPU performance though. So, while gaming, we also kept track of the CPU usage while running these two, more demanding titles.

In case you’re not familiar with how CPUs and GPUs work for games, basically, the CPU handles the processes in-game (such NPC AI) while the GPU handles the actual rendering of each frame. Because the GPU renders the game’s visuals, it is the key component in getting higher FPS. But the CPU is also vital as having a slow CPU means the game may get noticeable framerate drops when loading assets or when lots of NPCs are in the game. In games, you ideally want your GPU usage to be at max or near max so that you get the highest framerate possible while the CPU usage shouldn’t be at 90% so that you have enough headroom when the game needs to load new assets or if more NPCs pop up.

With this in mind, the i7-12700H didn’t even break a sweat while playing Hitman 3 and Cyberpunk 2077. While playing Hitman 3, the CPU usage hovered between 30-50%. Even on the game’s Dartmoor benchmark (which is quite demanding on a CPU), the CPU usage peaked at only 64%. Meanwhile, Cyberpunk 2077 ran with around 40-50% CPU usage on average, with a peak of 75% happening only once. In both games, the RTX 3060 GPU on the TUF Gaming laptop was able to put out the maximum performance that it can thanks to the CPU. 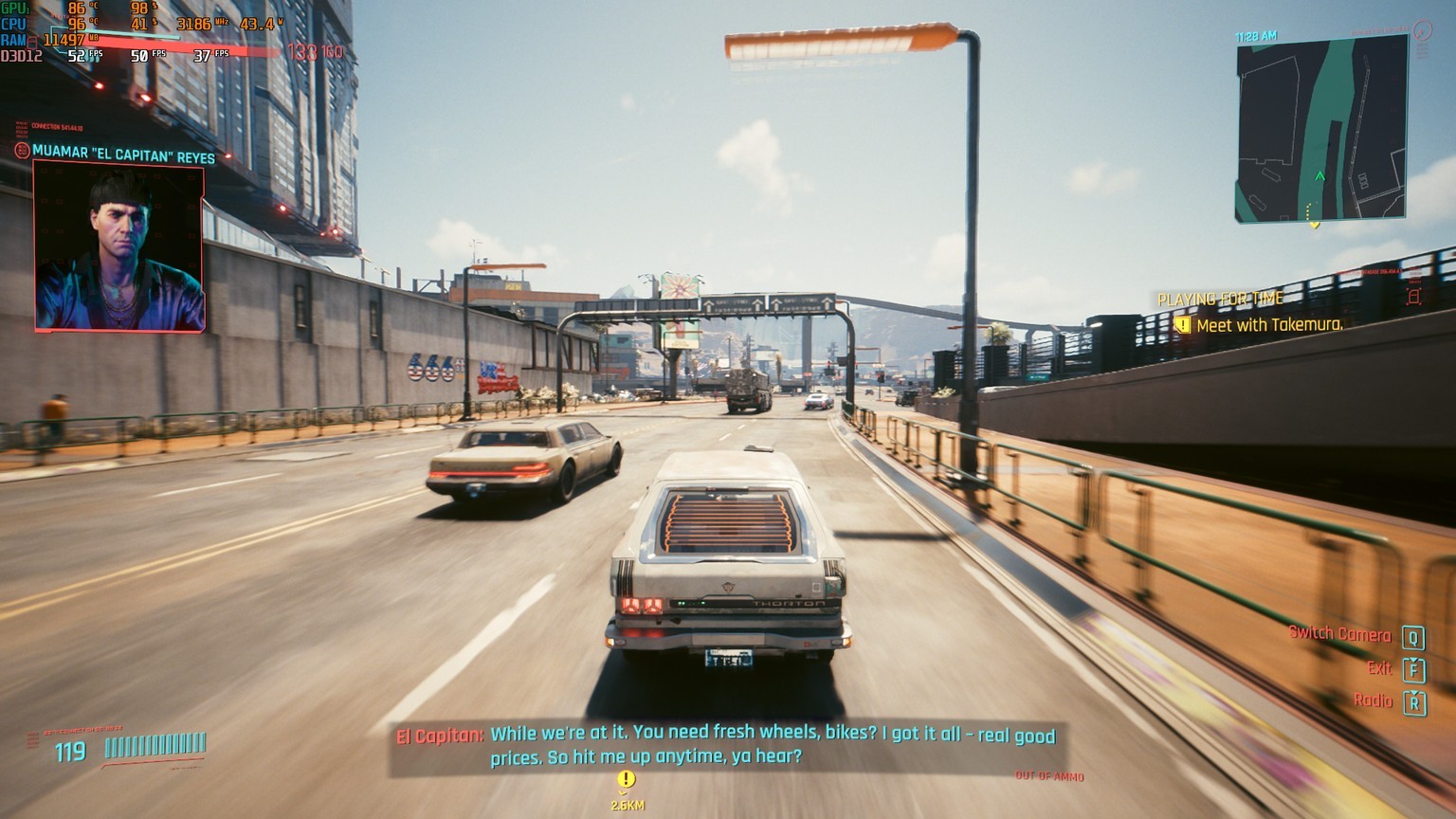 Given that the 12700H has more performance to spare when paired with an RTX 3060, it should have enough power to be a good pair even with an RTX 3070 mobile GPU. This makes it a great CPU to have in mid-range to upper mid-range gaming laptops.

Another great thing about having enough overhead on the CPU is that you can multitask with ease while playing. For example, the 12th Gen Intel CPU has more than enough power to run a game while maxing the GPU, all while recording or even streaming through OBS, at least in our tests at 1080p.

Aside from our own tests, there are also reviews which confirmed that the Intel 12th gen processor has the performance advantage over pretty much all other previous gen CPUs up to this point, making the 12th Gen Intel Core powered laptops the best for pure gaming performance. At least, that’s based on comparison against previous generation processors as the Ryzen 6000 mobile CPUs are only starting to roll out, so we’ll have to wait and see if they will retain the gaming performance crown as the weeks/months go by.

Moving on to productivity and content creation, the Intel 12th gen-powered laptop delivered great performance in our tests. Specifically, we tried editing photos and videos on the laptop, as well as open multiple apps at the same time for multitasking and it was fast and responsive throughout. Your mileage may vary depending on how heavy your workload is, but for many content creators, the i7-12700H will not disappoint.

For some numbers, here are the PCMark 10 benchmark scores of the i7-12700H laptop compared with the Ryzen 7 5800H-powerd notebook: 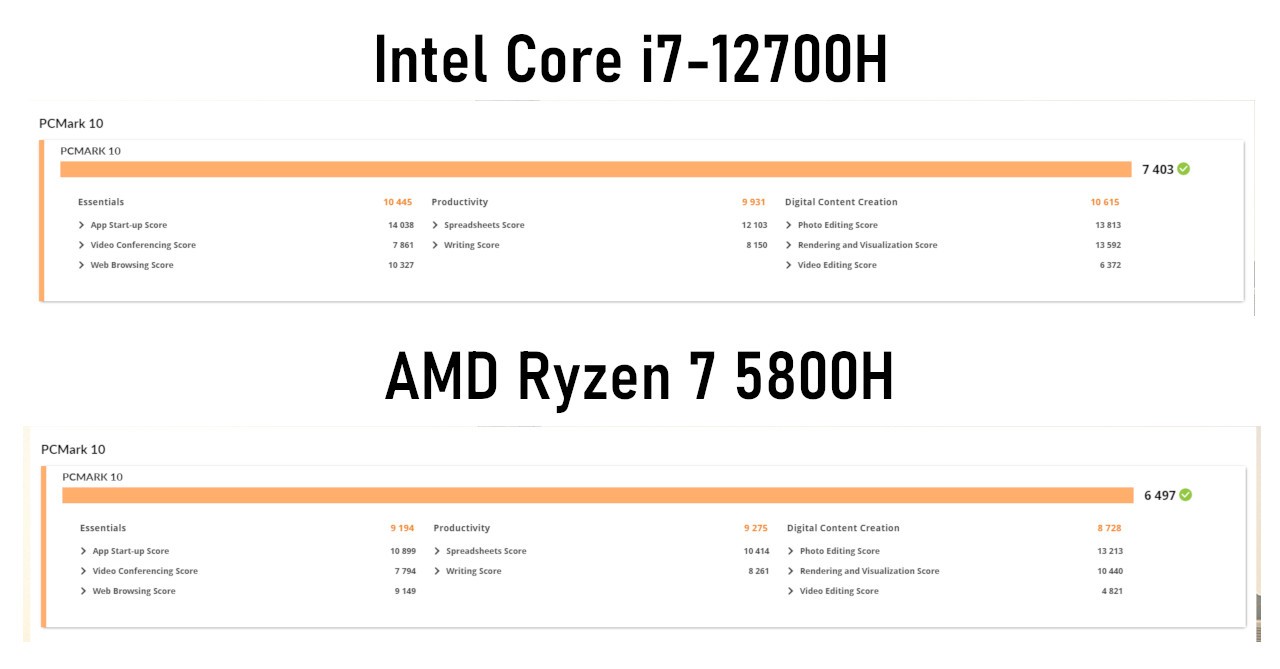 As you can see, the i7-12700H scored higher for Essentials (such as web browsing), as well as in Productivity (for office apps). Digital Content Creation is also a win for the Intel CPU, especially in the Video Editing benchmark score.

While the total score is not that far off, the Intel i7-12700H has a big advantage over the Ryzen 7 5800H when it comes to the CPU score, indicating better peak performance.

Again, these comparisons are meant to give you an idea of the noticeable generational leap in performance of the 12th Gen Intel mobile chips, and they aren’t meant to be a true 1:1 comparison as the laptop we tested are made by different manufacturers. There’s also the fact that the 12th Gen Intel chips support DDR5 memory (the TUF Gaming laptop has 16GB of DDR5 memory) can also skew the performance metrics in favor of the 12700H. Plus, the Ryzen 7 5800H is a previous-gen chip, so a Ryzen 6000 mobile CPU is a more apt comparison.

We have yet to test out a Ryzen 6000-powered laptop as these notebooks have only just released, though reviewers such as Linus Tech Tips have already started with some initial reviews. While their findings suggest that the Ryzen 6000 series has the advantage when running at a lower wattage, the 12th Gen Intel Core mobile processors are still the winners when it comes to peak performance. 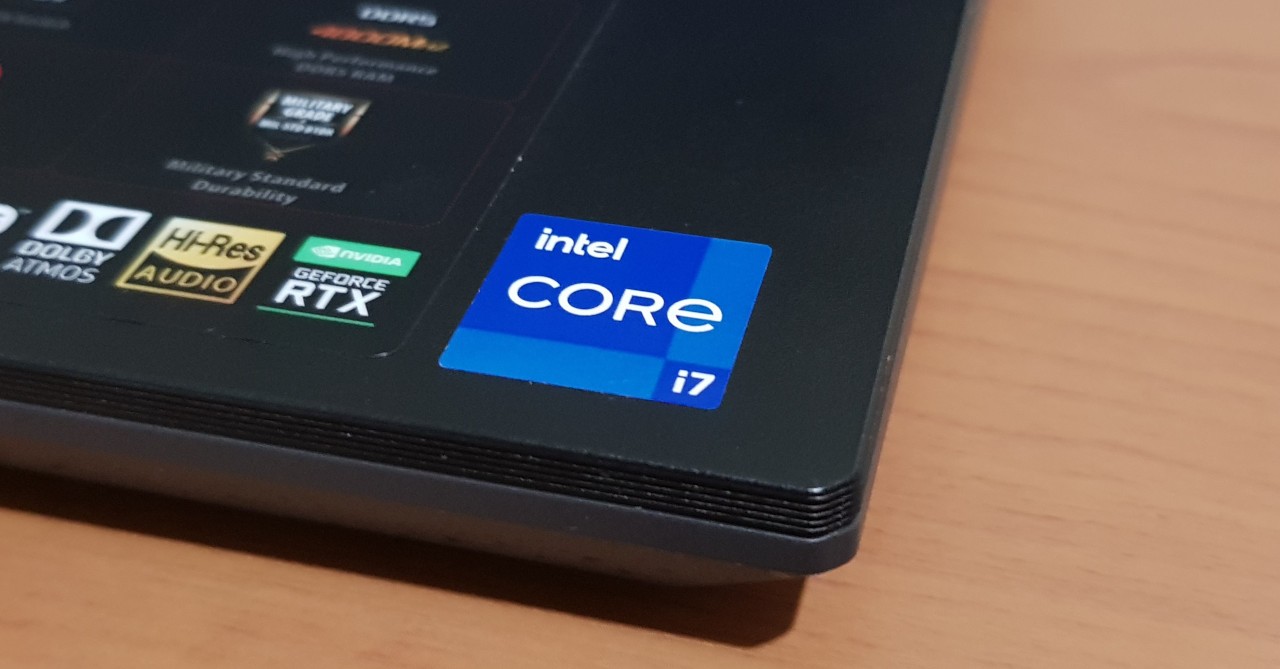 It’s been proven now that the Intel Core i7-12700H is a powerful processor, but what about battery life? Well, the 12th Gen i7 impressed us in our battery life test. After playing a 2 and ½ hour movie at 50% brightness and volume, the TUF Gaming laptop we used still had 70% battery remaining. For reference, other gaming laptops that we review typically only have 50% or less after playing a movie. This result means that gaming laptops with the Intel i7-12700H can have a battery life that’s more comparable to ultrabooks.

It’s tough to compare battery life between laptops of different brands, especially as there are too many components that differ that can affect battery life. But what we can definitively say is that we were impressed with the 12700H’s battery performance. While this doesn’t mean that all 12th Gen laptops will have the same long battery life (that will depend on how well each manufacturer optimizes their laptop), the potential is there for a long-lasting laptop. Plus, another review of the 12th Gen Intel CPUs also confirmed that the 12th Gen Intel processors are indeed better than previous gen CPUs.

The improvements in battery life are likely thanks to the E-cores of the 12th Gen Inte Core CPU. These smaller cores are more efficient (hence their name “E-core”), so running light tasks shouldn’t drain much power. Of course, if you run more hardware-intensive apps, you will drain the battery much faster. 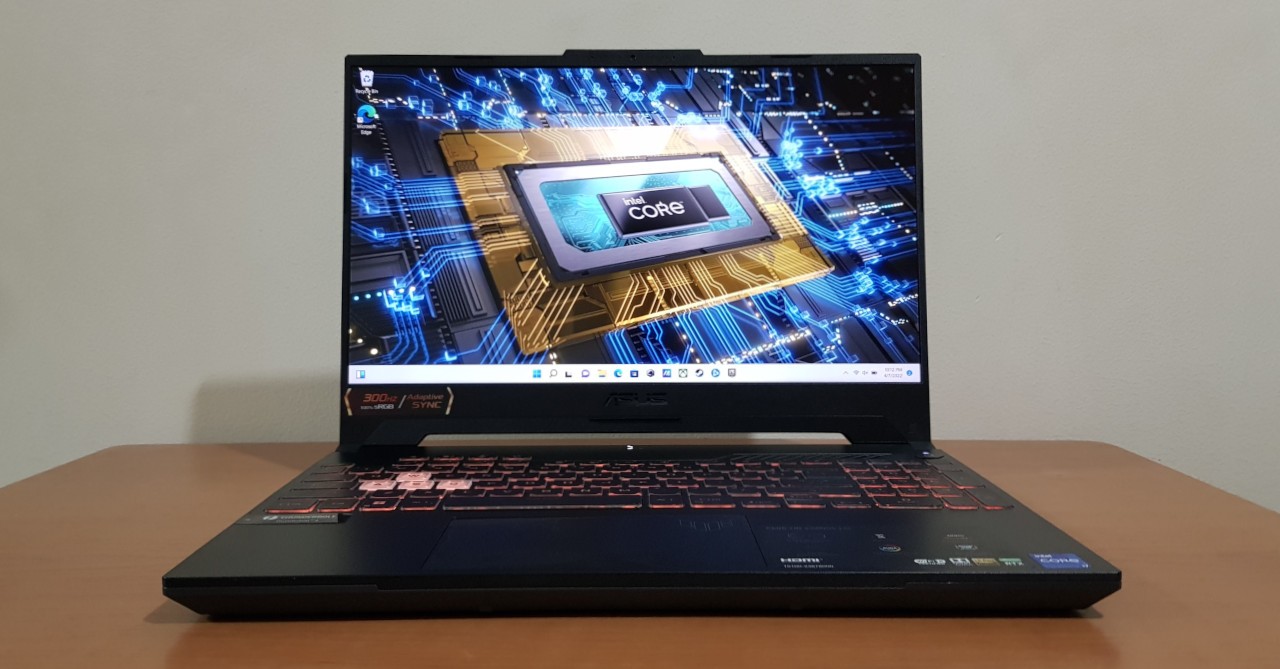 Based on our review, the 12th Gen Intel Core processor hype is warranted as the Intel Core i7-12700H performed well for gaming, productivity, and battery life. Not only did the 12th Gen Intel-powered TUF Gaming laptop deliver great gaming performance, but it did so without pushing the CPU all that much, meaning there’s a lot of headroom for when you need to multitask, or when more CPU-intensive games get released in the coming years. Content creation is also a strong point of the new Intel CPU as it outperforms the equivalent Ryzen 7 processor in our test. Finally, the battery life of the Intel-powered laptop was more akin to an ultrabook than a typical gaming laptop given how surprisingly long it can last on a single charge.

Given this, if you’re looking for a mid to upper mid-range gaming laptop (something with an RTX 3060 or a 3070), then getting a laptop with an Intel Core i7-12700H is a definite recommendation, especially if you want a powerful gaming partner that will continue to have enough performance in the coming years.