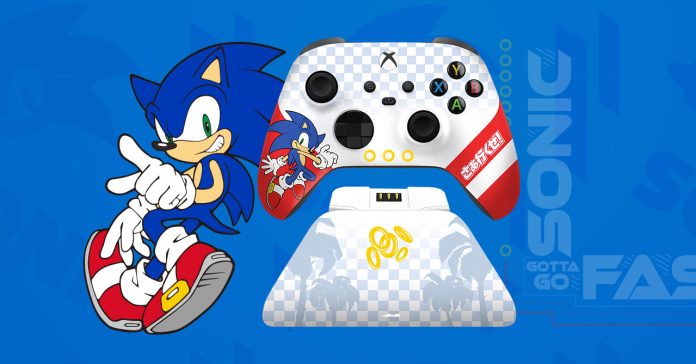 Razer has unveiled its new Sonic the Hedgehog limited edition Xbox Wireless controller, and it comes with a Sonic-inspired design, as well as a similarly-styled charging stand.

This limited edition controller features a white and red colorway with a checkered flag pattern at the top, three rings at the bottom, and Sonic himself on the left side. The back of the controller and the charging stand also come with Sonic-themed designs.

The controller is designed to work with Xbox One, Xbox Series X|S, Windows 10/11, and Mac OS. Though to get the controller to work on Mac, you’ll need an Xbox Wireless Adapter.

Aside from the Sonic design, the controller also features “Impulse Analog Triggers” which have their own vibration motor, as well as pressure sensitivity.

Finally, the charging stand can fully charge the controller in under 3 hours. The stand also comes with overcharge protection to prevent overheating.

The Razer Sonic the Hedgehog limited edition Xbox controller is priced at USD 199.99 (around PHP 10,315).

This isn’t the first Sonic the Hedgehog edition Xbox controller as Microsoft revealed a set of custom Sonic-themed controllers a few weeks ago. But unlike Razer’s version, the Microsoft custom controller is based on the Sonic live action movie, and it comes with fuzzy textured coatings. Though the aforementioned custom controllers were made in very limited quantity and can only be gotten by joining Microsoft’s promo.

- Advertisement -
Previous articleSquare Enix announces Kingdom Hearts 4 and Kingdom Hearts Missing-Link
Next articleTOYCON PH is back for 2022, happening this July