VOID Riders is the first of two story expansions for OlliOlli World. 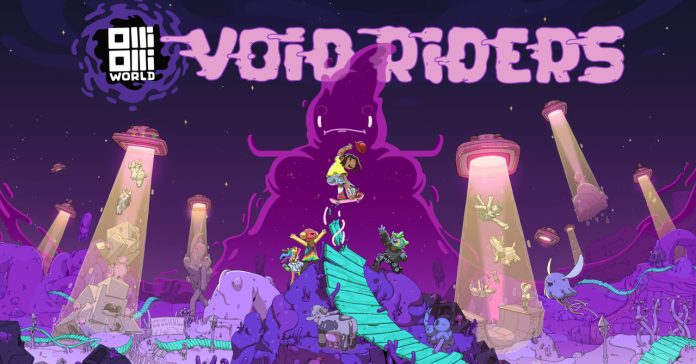 Private Division and Roll7 have announced VOID Riders, the first story expansion for OlliOlli World which releases on June 15, 2022.

VOID Riders is the first of two story expansions for the game, and it will introduce a wealth of content, including new levels and more.

Check out the gameplay reveal trailer for the expansion here:

The expansion is described as:

“Extra steezy extraterrestrials, Sair’Rah, Khehvyn, and Pftangxi, have arrived in Radlandia, intent on acquiring skater specimens for the mighty Nebulord. OlliOlli World: VOID Riders brings a brave new world of challenges and space-age gear as you prepare to enter and explore the alien zone, the V.O.I.D. Feel the flow as you skate across the snowed-in Cloverbrook, grind the eerie Sunshine Valley, and visit the storming Burntrock.

While traversing Radlandia, find yourself swept up in an alien abduction featuring a new tractor beam mechanic. Stick the landing and impress Nebulord with your out-of-this-world style and you may just find yourself in favor of becoming his favorite skate alien! Kickflip into the raddest reaches of space in OlliOlli World’s next extraterrestrial adventure.”

VOID Riders will release on June 15, 2022 for PS5, PS4, Xbox Series X|S, Xbox One, PC, and Nintendo Switch. The expansion will be available as a separate purchase for OlliOlli World players, and will come with the OlliOlli World Rad Edition.

Want to know more about the game? Check out our review of OlliOlli World here:

OlliOlli World Review | Getting Into the Zone