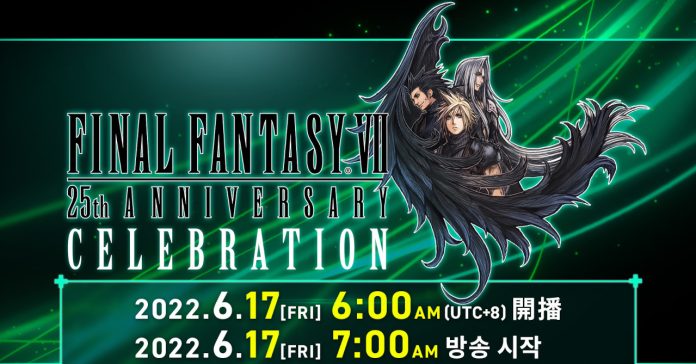 Square Enix has announced that a Final Fantasy 7 25th anniversary Celebration broadcast is happening on June 16 at 7AM JST — that’s June 16 at 8AM in PH time.

According to Square Enix, the broadcast will be a 10-minute event that will offer fans a first look at new information regarding the 25th anniversary of FF7.

The broadcast will premiere on the official Square Enix YouTube channel here:

Aside from this information, there’s no word yet on what exactly we will see in the upcoming stream. Though given that it will only be 10 minutes long, here’s hoping that we see exciting new trailer.

Specifically, we have our fingers crossed for a Final Fantasy 7 Remake Part 2 announcement during the 25th Anniversary event. We’re also expecting info on the FF7 mobile titles, including The First Soldier.

While this is the first official confirmation of an FF7 event, this broadcast has been mentioned before by Tetsuya Nomura. He mentioned that FF7 news will be revealed soon while he was part of a Japanese live stream for Final Fantasy 7 The First Soldier.

Given that it has been two years now since the initial release of the Final Fantasy 7 Remake, the time might be right for more info on the second part.