Four free games are up for grabs this July for PS Plus subscribers! 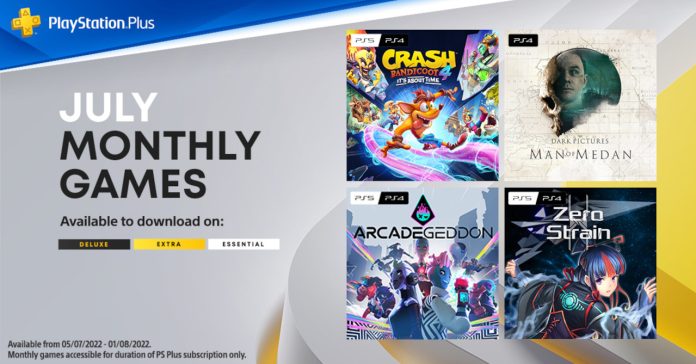 PlayStation Asia has announced the July 2022 free games lineup for PS Plus in Asia, and it features four games. For comparison, there are only three free games for Western account holders are only three as the Asia lineup features one extra free title.

Here are the four titles in the PlayStation Plus free games lineup in Asia for July 2022:

Probably the highlight game in this month’s lineup is Crash Bandicoot 4: It’s About Time. This Crash Bandicoot title introduces lots of new features that make for an even more challenging experience, all while being more accessible to everyone. At the core though, Crash 4 is still a true Crash Bandicoot experience that’s a worthy successor to the original games.

Next up, we have Man of Medan, the first installment in Supermassive Games’ Dark Pictures Anthology. Man of Medan is an interactive drama horror game that follows a group of college students as they go on diving trip in the Pacific in search of treasure. Instead, they come across a ghost ship.

Arcadegeddon is an arcade style co-op shooter that mixes PvE and PvP. In this distinctive-looking shooter, players can explore different biomes, participate in mini games, and face off against numerous foes.

Finally, we have Zero Strain, a game that’s free only for PS Plus subscribers in Asia. This game is a fast-paced, top-down shoot ’em up with MOBA elements, as well as an eye-catching, neon-inflected art style.

Recently, PlayStation revamped its PS Plus service, and it now has three tiers. Though these free games will be available to download for PlayStation Plus subscribers in all tiers.