The Persona series is getting released on the Nintendo Switch 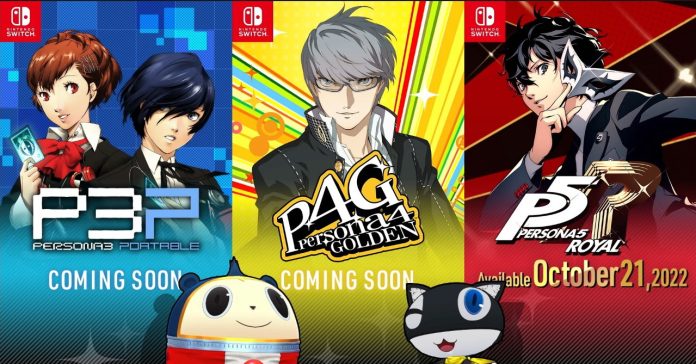 After the Xbox and PlayStation release announcements, ATLUS has finally confirmed that the Persona series is also releasing on the Switch. The announcement was made during the latest Nintendo Direct which featured announcements from third party developers.

Specifically, Persona 3 Portable, Persona 4 Golden, and Persona 5 Royal are releasing on the Nintendo Switch soon. Persona 5 Royal in particular will release on October 21 — the same day as the game’s release on Xbox, PC, and PlayStation. Meanwhile, the other two games are said to be “coming soon.”

This marks the first time that mainline Persona games are releasing on Nintendo’s console. Though this isn’t the first Persona game to release on the Switch as there’s Persona 5 Strikers and Persona 4 Arena Ultimax. Going back a few years, you also have Persona Q and Persona Q2 which are dungeon crawler spin-offs which released exclusively on the 3DS.

In case you’re new to the mainline Persona games, or of the series as a whole, these three games are considered as the definitive versions of Persona 3, 4, and 5. These titles are enhanced re-releases which feature lots of new content compared to the original versions. While Persona 3 Portable being the definitive version is arguable as it features simplified navigation and lacks “The Answer” which is an endgame content addition, its quality-of-life features make it much better and more convenient to play.

With the Persona series finally heading to the Switch (at least Persona 3-5), maybe we can see a re-release for the first two games soon? A PC, Xbox, and PlayStation release of Shin Megami Tensei V would also be nice. 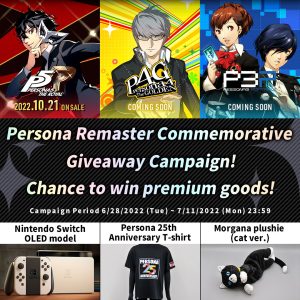 To celebrate the upcoming release of the Persona games on Switch, ATLUS is holding a giveaway campaign of Facebook. There, you can win premium goods, including Persona merch and a Nintendo Switch OLED.

Here’s how you can participate:

Along with the reveal, ATLUS also held 25th Anniversary celebration stream for the series, and it featured a special performance by Lyn, the vocalist from Persona 5.

In case you missed it, you can watch the stream here: