No one is more deserving than Elden Ring's true hero. 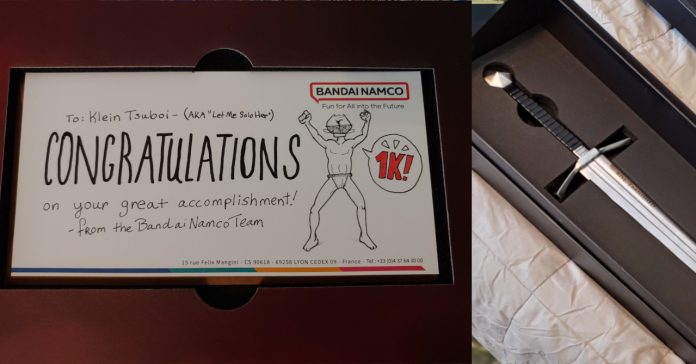 To reward him with his efforts, Bandai Namco sent over renowned Elden Ring player “Let Me Solo Her” with an impressive package!

This cool package consists of various goodies, including a cloak, a wooden plaque of Malenia, and the pièce de résistance — a huge sword.

Thank you @BandaiNamcoUS and @ELDENRING for giving me this gift and congratulating me for being #LetMeSoloHer . I can still remember my first experience with the soulsborne series and almost quitting because of Iudex Gundyr in Dark souls 3. I'm glad I persisted and (1/3) pic.twitter.com/w2FF77HRnO

In his tweet, Tsuboi thanked Bandai Namco and recounted how he almost quit Dark Souls 3 because of Iudex Gundyr. Good thing he stuck with it as he is now arguably the most popular Elden Ring player.

Not familiar with him? Let Me Solo Her is an Elden Ring player who became popular back in April for helping lots of players defeat Malenia — a boss that’s considered to be the hardest in Elden Ring.

How he helps is that he puts a summon sign in front of Malenia’s boss room for players to summon him. Aside from being a massive help for many players, he also gained renown for his equipment as he uses only a Jar helm with an Uchigatana and Rivers of Blood.