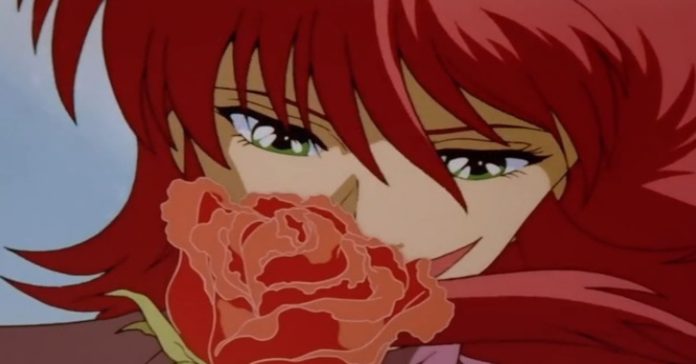 No, this isn’t an out-of-season late April Fool’s joke — Kurama’s Rose Hair Treatment Oil is just as real as the Toguro memes you’ve been sharing for the past decade. Suffice to say, it looks pretty good.

After half a decade, it’s found its way back to die-hard fans, and right on time for the Yu Yu Hakusho anime’s 30th anniversary.

Now, for those who are curious about the lore, here’s the origin story of this intriguing Kurama’s rose hair treatment product. Whether it be subs or dubs, the context is all about those luscious locks. I made sure to skip to the good part.

For those who are interested, and happen to have access, the updated “Renewal” bottle for the treatment oil is now available for 3,300 yen (24 USD) and is scheduled to ship out sometime in December 2022.

Yu Yu Hakuso is easily one of the most popular anime of all time. But in case you’re not familiar with it or need a refresher, the series’ premise is described as:

“The story revolves around Yusuke Urameshi, a high school student who spends his days getting into fights. One day, he dies in an accident while trying to protect a young child, and as he grapples with the fact that he is looking down on his dead body, a woman named Botan who calls herself a guide to the spirit world relays to him the shocking truth: no one expected a delinquent like Yusuke to die performing an act of goodness, and there was no place for him in either heaven or hell. Thus, Yusuke is given a chance to be revived, and after passing his trial, he becomes an Underworld Detective. From there, Yusuke quickly becomes entwined in a mystery that envelopes the human, demon and spirit worlds.“

Smelling “rose whip fresh” is no longer a dream. Have at it, my friends.

In related news, a Yu Yu Hakusho live action series is in the works.