Don't get your hopes up. 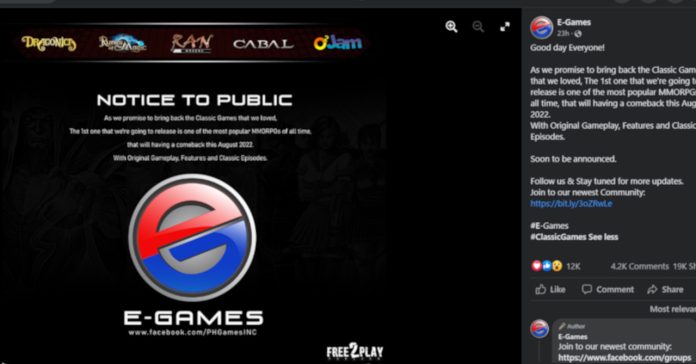 A new Facebook post trended online recently which seemingly claims that E-Games is back, but is it real?

Specifically, a Facebook page named E-Games recently shared a post that claims that classic online games such as RAN Online and O2Jam are coming back.

While the games weren’t explicitly mentioned in the caption, the post image featured the logos of Dragonica, Runes of Magic, RAN Online, Cabal, and O2Jam.

Given that these games are beloved by lots of Filipino gamers, there has been a lot of hype on this post as it got over 20,000 shares as of this article’s writing.

As reported by Reimaru Files, E-Games, the original publisher of the RAN Online and Cabal, has been defunct in over a decade, with the intellectual property of E-Games now legally under a different company. This means the organization behind this new E-Games page is not legitimate.

Adding on to this, most of the games shared in the post are no longer being supported by developers. Currently, only Cabal is being actively developed. Plus, only PlayPark is the owner of the official license for the game.

“PlayPark owns the official license to use the Cabal logo for any and all customer-facing initiatives,” said a PlayPark representative regarding the recent post.

So, what is this page then (aside from being a fake of course)? Well, it’s likely that it this page is for private servers. Given that this is unofficial and is parading as the legitimate E-Games, gamers should exercise caution regarding this page and the group that they are promoting.