No crimes are left unpunished. 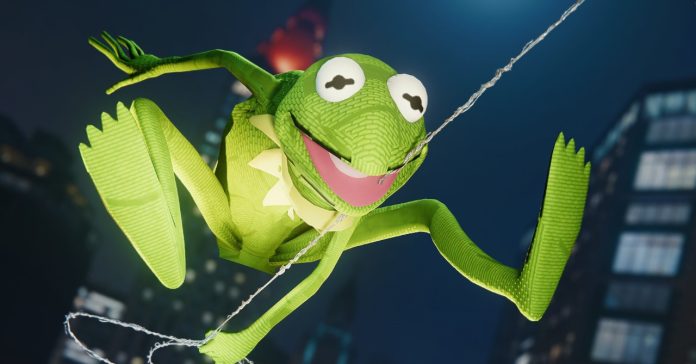 We should have expected this to come with Marvel’s Spider-Man having made its way to PC, and it’s no surprise the funny and wacky things that the Modding community could do with the game. Through the course of the game’s time on the PC, which is not yet too long, we saw the Web-Head get replaced by various characters. But perhaps this particular mod will stand out the most as Spidey got replaced by a Muppet that needs no introduction, Kermit the Frog.

The famous frog of the Muppets show replaces Peter Parker, a.k.a Spider-Man when he dons the Advanced Suit thanks to the mod created by the creator that goes by the username TangoTeds. What is hilarious about this Kermit mod is how smooth looking he is when he uses Spider-Man’s powers shown in TangoTed’s Twitter post.

The Kermit mod is not only limited during gameplay as this frog can also be spotted in a few in-game cutscenes, leading to somewhat awkward but somehow fitting scenes considering how Kermit looks so good swinging around the buildings of New York.

The Kermit Spider-Man mod can be downloaded for free at Nexus mod and only requires you to have the Spider-Man PC Modding tool installed. Once installed, Kermit the Frog becomes playable once Peter Parker equips Spider-Man’s Advanced Suit. With all that being said, it would be really hilarious if MJ is replaced by Miss Piggy or his new girlfriend Denise to complete the Muppet experience.

You forgot the rest of the video. pic.twitter.com/Hy3WeA9G5p

If you’re somehow unfamiliar with Kermit the Frog, he’s the famous Muppet in The Muppet Show, even serving as its face due to his popularity. He also made appearances on Sesame Street but rarely appears in the show due to the exclusivity of ownership of the character. But perhaps Kermit the Frog is more famous on the internet due to his depiction in various memes that is the opposite to his wholesome self, with one of the examples in the post above. So this is probably one of the reasons why Kermit feels so right as Spider-Man due to his online presence.