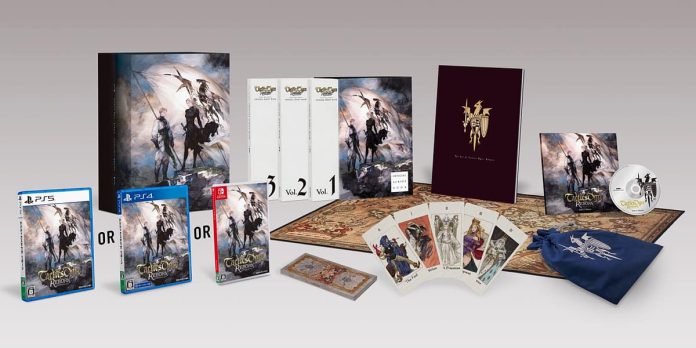 To no one’s surprise, Square Enix has officially announced Tactics Ogre: Reborn, coming for the for PlayStation 4, PlayStation 5, Switch, and PC (via Steam).  It will launch on November 11.

Collector’s Edition (Japan only for now)

If you happen to be in Japan, it would delight you to know that an exclusive collectors edition will be made available for 22,000 yen (roughly around 11,000php). The collectors edition will include a scenario script book, an official art book, a soundtrack CD featuring the in-game music re-recorded with a live orchestra, a set of tarot cards with storage pouch and play mat depicting the game map.

Check out the images below: 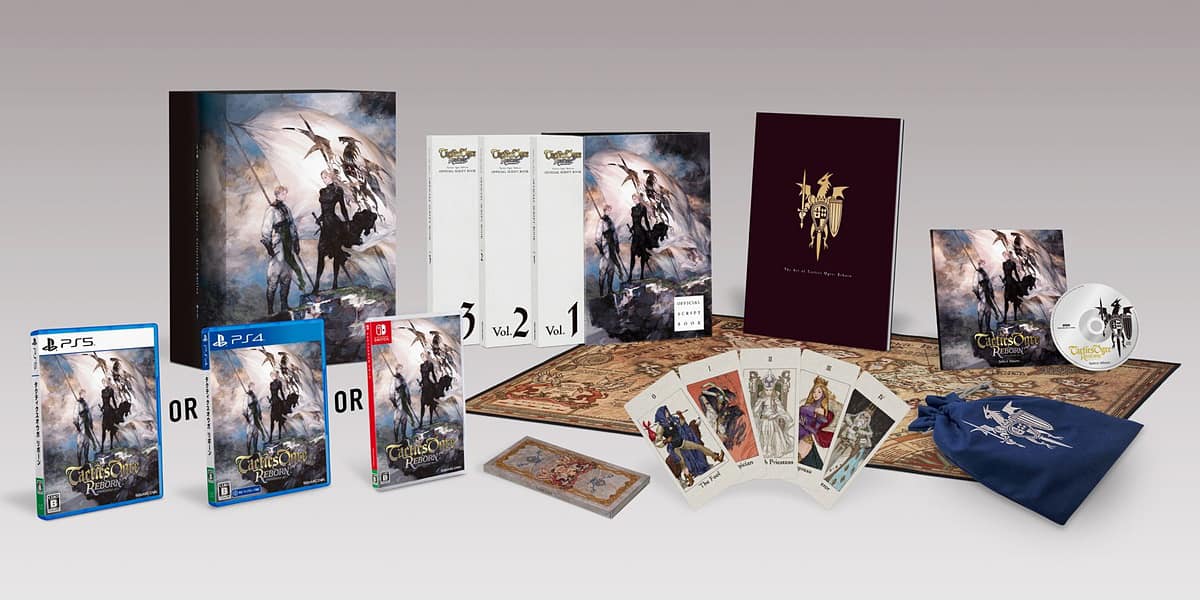 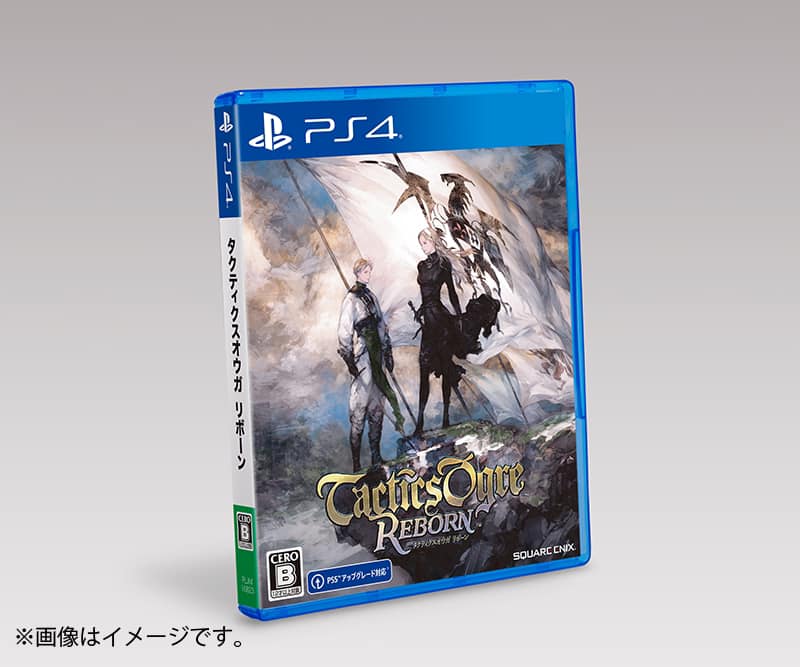 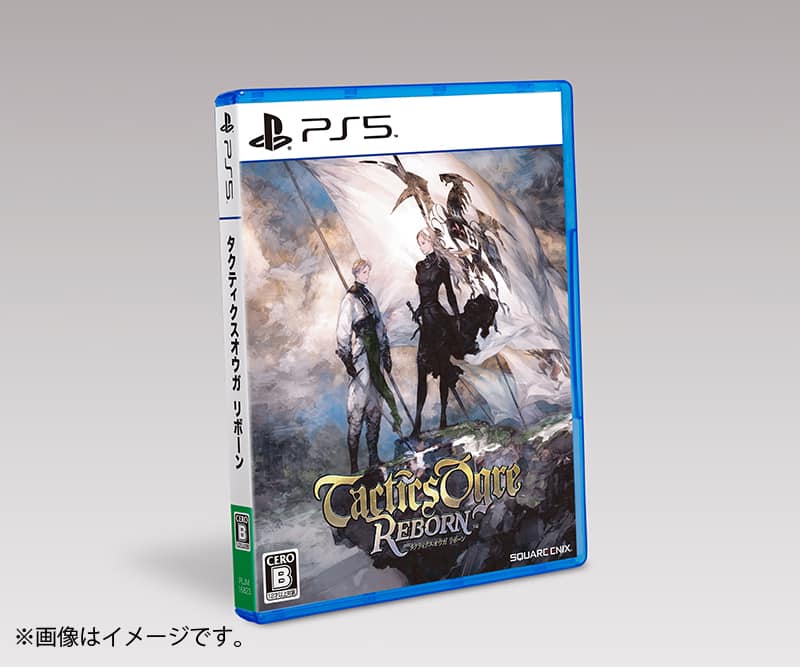 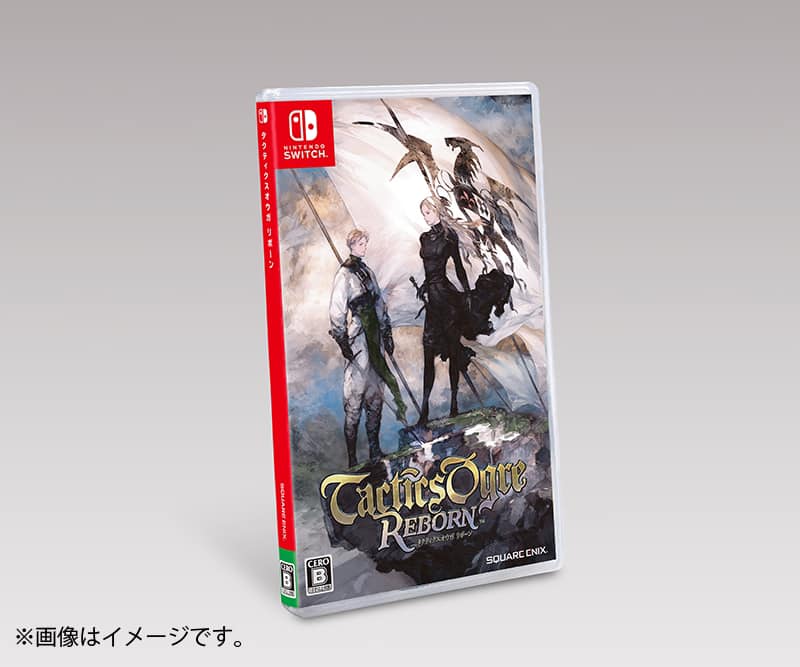 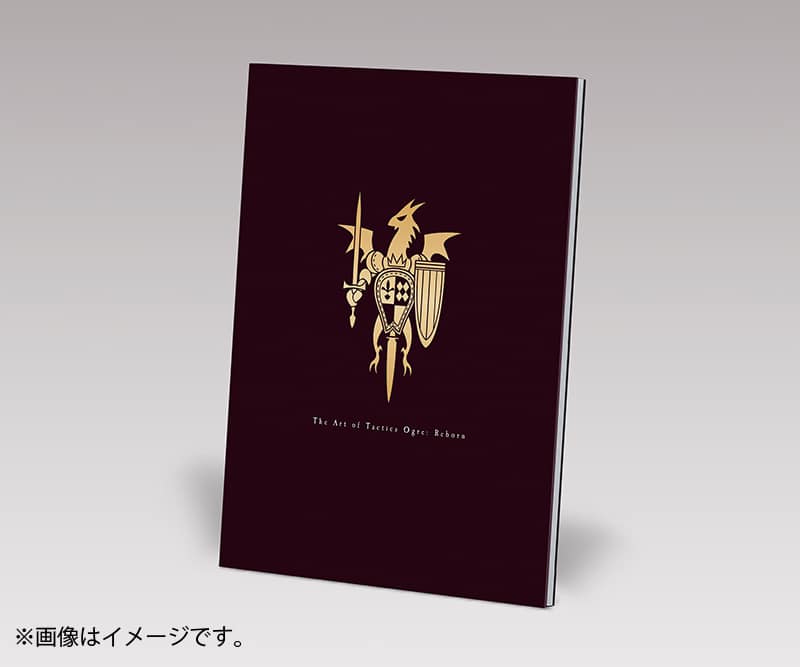 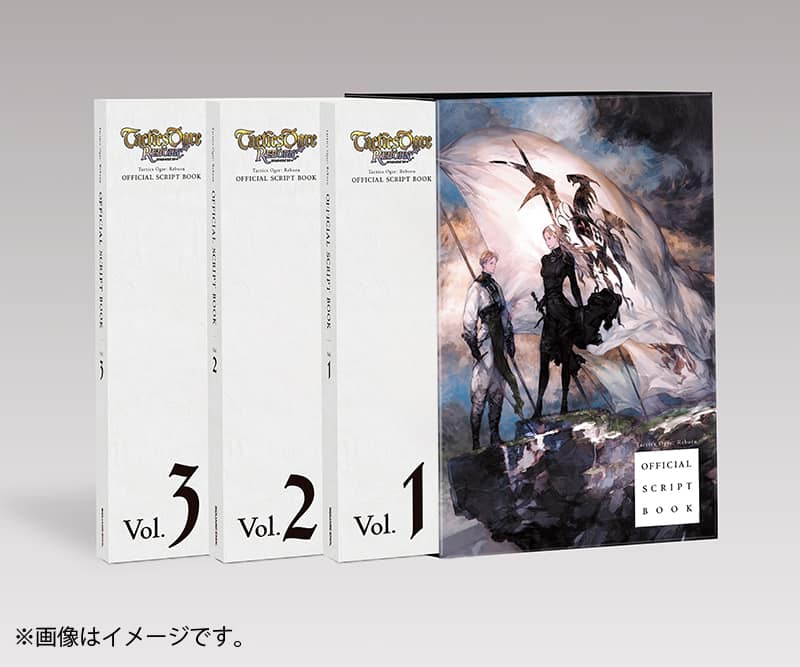 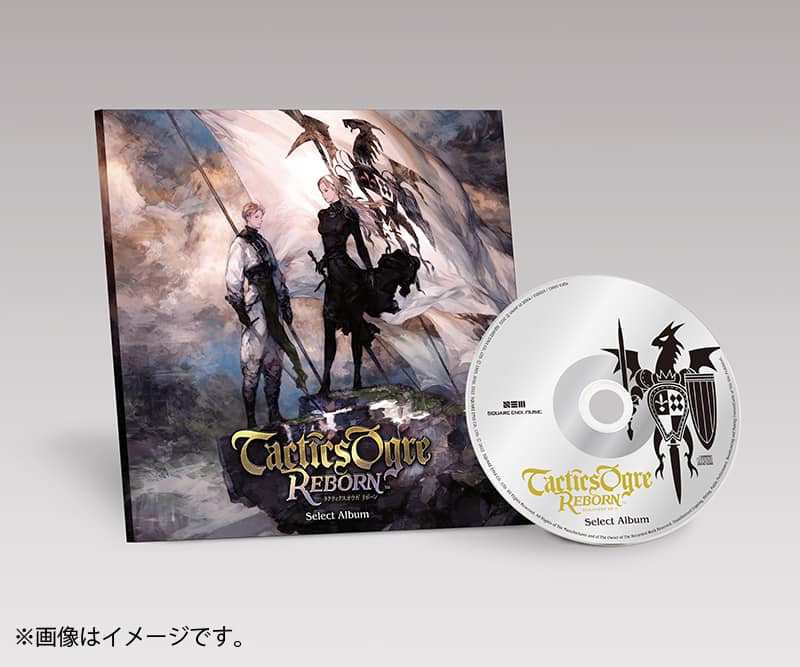 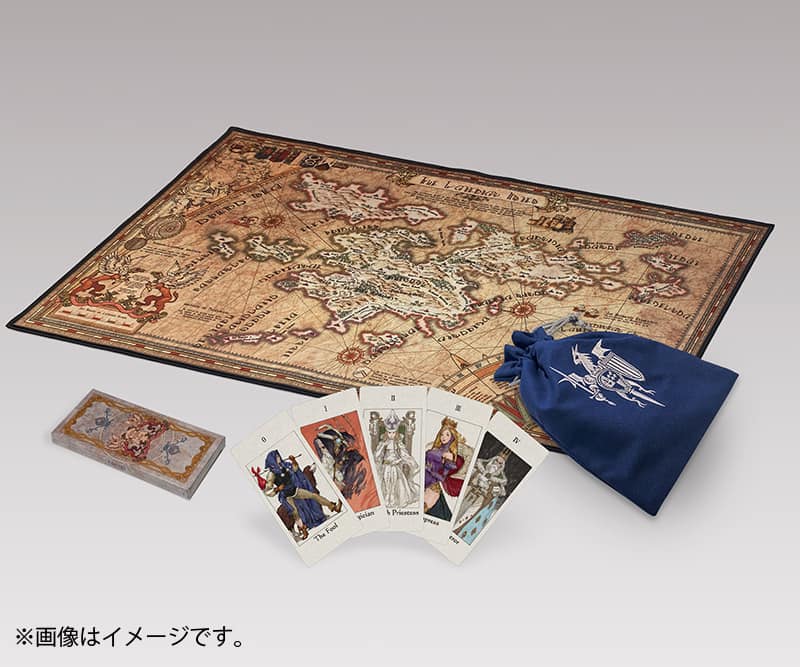 Based on the 2010 release, the game features improved graphics and sound, as well as updated game design, bringing to life a new Tactics Ogre that remains true to its roots.

A tactical role-playing game depicting the struggle for control of the Valerian Isles.
Your choices affect how the story unfolds, and even how it ends, with a game system that allows for multiple paths through the game and multiple endings. The story takes place through the eyes of a young man named Denam. The decisions he makes will alter the fate of those around him, and shift the course of Valeria’s history.
Fight pitched tactical battles on three-dimensional battlefields. The completely revamped AI enables enemies to adapt their tactics to the situation, providing a battle system that always keeps you thinking and never grows old.
The class-wide level management system used in Tactics Ogre: Let Us Cling Together (2010) has changed to a unit-by-unit level system. Theorycraft your way through endless combinations of classes, equipment, skills, and magic.
Enjoy numerous playability improvements, such as a quicker pace of battle, auto save, and a complete overhaul to the controls and UI to make it easier to get into the game than ever.

The unparalleled details of the characters and backgrounds from the original Tactics Ogre: Let Us Cling Together (1995) have been painstakingly recreated in high definition.
The cutscenes are fully voiced in English and Japanese, and all of the music has been rerecorded with live performances! The voices bring new life to the complex motivations of the characters that make up the factions and shifting political alliances of this epic story.
When you advance far enough in the game you’ll unlock the World Tarot, enabling you to travel back in the story with the power of your forces intact; an incredibly useful feature in a game where your choices have such a huge impact on how the story unfolds. If you wonder what a different choice would have led to, now you can find out!
Traveling back isn’t limited to the story; the Chariot Tarot lets you rewind up to a certain number of moves during battle. In a game of tactical battles where a single mistake can mean the difference between victory and defeat, you can play without worrying that you’ll back yourself into a corner.
Enjoy a wealth of endgame content such as the 100-level Palace of the Dead.
And here are some more details:

■ A Brief History of Tactics Ogre

The Ogre Battle series, to which Tactics Ogre belongs, started way back in 1993.

The first game in the series to be released, Ogre Battle: The March of the Black Queen, launched that year in Japan for the Super Famicon, and arrived in 1995 for players in North America. A unique combination of real time tactics and RPG, it was a real breath of fresh air for gamers, and it became a hit.

This successor featured a substantially improved story, a world filled with even more colorful characters, an updated game with new systems and a wealth of content to satisfy even the most hardcore players. The game was a critical smash, winning positive reviews from media and players alike.

Which brings us to 2022 and Tactics Ogre: Reborn! This new version of the game is based on the 2010 remake but features significant changes that make an already great game even greater!

Tactics Ogre: Reborn features a host of enhancements to visuals, sound, game design and more. Here’s a brief rundown of some of these improvements:

The beautifully detailed characters and backgrounds of the original Tactics Ogre have been recreated in high definition.

The detailed pixel art that gives the game its unique feel has also been preserved and enhanced to look great on modern HD displays.

Not only is the user interface now in high definition, it’s also been redesigned to make information easier to understand, with streamlined controls.

All dialogue in Tactics Ogre: Reborn is fully voiced, bringing new life to the complex motivations of the characters that make up the factions and shifting political alliances of this epic story. You can choose between English and Japanese voices, with the ability to switch between them in the config menu at any time.

The sound effects have also been remastered, immersing you in battle like never before.

Tactics Ogre composer Hitoshi Sakimoto rerecorded the entire soundtrack with a live orchestra. At times the melodies are ominous and filled with tension, while at other times they offer a gentle reprieve. The lingering notes and haunting echoes only found in a live performance raise the immersion in the gameplay to another level.

Building on what worked in previous versions of Tactics Ogre, this new game incorporates new elements as part of an overall redesign of the battle system. Here’s a brief introduction to some of the new features that await.

The class-wide level management system found in Tactics Ogre: Wheel of Fortune has been replaced by a unit-by-unit level system.

Each unit advances differently depending on its class, making for an elegant system that lets players plot their way through endless combinations of equipment, skills, and magic for each unit.

This means that the player is able to consider the bigger picture, and decide on the overall composition of units to bring into each battle.

The team has made significant changes to the artificial intelligence (AI) of your opponents in combat.

Thinking about how to adapt your plans as the situation changes keeps battles engaging and fresh.

Tactics Ogre: Reborn has seen numerous playability improvements, such as a quicker pace of battle, auto save, and a complete overhaul to the controls.

All this makes it easier to get into the game than ever before.

We’ve talked a lot about what’s new, but those unfamiliar with the game may be wondering: what’s it all about? Here’s the basic setup for the story:

The game is set on the Valerian Isles, jewels of the Obero Sea. Long a center of naval commerce, the people of the isles struggled throughout history for dominion over her shores.

Finally there rose a man to put an end to this conflict: Dorgalua Oberyth – but history would know him as the “Dynast-King”. King Dorgalua strove to stamp out the hatred among the people of the isles, and for half a century, Valeria knew prosperity.

Yet upon the king’s death, civil war erupted once more, as three factions vied for control: the Bakram, who comprised much of Valeria’s nobility; the Galgastani, whose people made up the majority of the isles’ population; and the Walister, who numbered but few.

The isles were soon divided between the Bakram and Galgastani, and an uneasy peace settled across the land. Yet none believe the calm will last…

What follows is an epic tale of war, as many memorable characters get swept up into an escalating conflict. Let’s meet a few:

Denam is the main hero of this tale.

His father, Abuna Prancet, was taken by the Dark Knights when they raided his hometown of Golyat. Later, as a member of the Walister Resistance, Denam fights against the Bakram and the Galgastani with the help of his sister, Catiua, and his childhood friend, Vyce.

Denam has a strong sense of justice, and the iron will be needed to bring about the change he envisions. A thoughtful young man, he harbors doubts about the meaning of their struggle.

Catiua is Denam’s sister and a fellow Walister. Having lost their mother at a young age, she and Denam were raised by their father, Abuna Prancet, and now Catiua has an overbearing sense of affection for her brother.

Thanks to the teachings of her father, she is well along her way to becoming an oracle, and she puts her skills to use fighting alongside Denam and their childhood friend Vyce. Yet it is less her principles that drive her to join their struggle, and more her fear of losing her brother.

The Dark Knights slew Vyce’s father, the only family he had left, leaving him an orphan. He cannot abide the oppression of the Walister, so he eagerly joins the struggle against their tormentors.

A capable man of action, he and Denam complement each other well.

Bakram, 65 years old at the time of his death.

Dorgalua used his peerless intellect and charm to forge the bickering realms of Valeria into a single kingdom.

With the isles united, he set about implementing his policy of racial reconciliation, and the people hailed him for his wisdom. Yet after his death, there was no clear successor to the throne, and Valeria was once again plunged into civil war.

In honor of his great achievements, he is often referred to as the Dynast-King.

Juda is the former lord of Almorica Castle. When civil war overtook Valeria, fewer than one person in ten were Walister, and it was Duke Ronwey who led them in resistance against the Galgastani.

He fought bravely for half a year, before finally meeting defeat. Now he is held prisoner.

When King Dorgalua died, Brantyn swiftly rose from his position in the clergy to become regent of the Kingdom of Valeria – such was his thirst for the reigns of power. Dorgalua’s trust in him had been absolute, so the motives behind this sudden slight against the royal house are unclear.

The Dark Knights have come to Valeria under a secret agreement with Regent Brantyn, leader of the Bakram.

Leundar is Leader of the Kingdom of Galgastan. To secure the southern half of Valeria, he waged a blood war to eradicate the Walister.

Many of his own people attempted to revolt in the face of such barbarism, but Balbatos turned his forces against them as well, making it clear that he would rule Galgastan with an icy, iron fist.