She completed the whole 25m pool with backstrokes, all while balancing an anime figure! 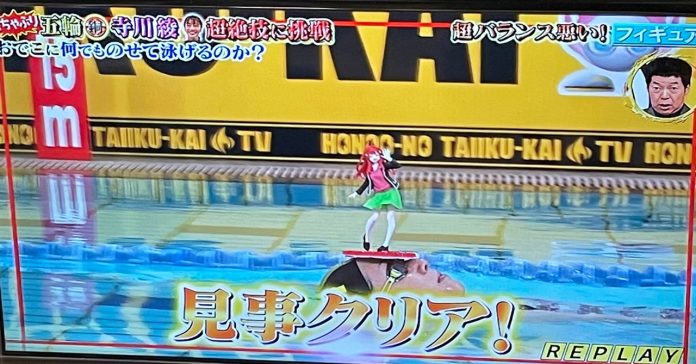 Japanese variety TV show Honoo-no Taiiku-kai TV impressed many audiences with its last week’s episode, as it featured former Japanese Olympic swimmer Terakawa Aya stepping up to the challenge of the viewers and emerging victorious.

The challenge given to Terakawa Aya was to swim a 25m pool while performing a backstroke. It may sound simple at first considering the former Olympic swimmer’s signature form of swimming is the backstroke, and has won medals and has set personal records in this style during her career. But to put a real challenge in this gauntlet, Aya must balance an object on her forehead during the task without dropping it in the water. For some reason, the object chosen for this challenge is a Coreful Figure of Nakano Itsuki of Gotoubun-no-Hanayome.

Standing over 7.87 inches (20cm) made from PVC material the non-articulated prized figure can stand on its own with no problems thanks to its flat standing base. But there’s no question that balancing the figure on your forehead is not an easy task, let alone balancing it while swimming. So, it is an impressive feat like no other that Terakawa Aya managed to complete on national TV, despite being retired as an Olympic Swimmer in 2013.

This left the show’s Japanese audiences impressed, and it even caught the attention of the Manga’s original creator Haruba, Negi, showing his reaction on Twitter.

Gotoubun-no-Hanayome or The Quintessential Quintuplets is an Anime/Manga series created by Haruba, Negi that tells the story of Uesugi Fūtarō as he develops a relationship with the titular Nakano quintuplets Yotsuba, Ichika, Nino, Itsuki, and Miku. The Manga was a commercial success and had an anime adaptation with two seasons and a movie.