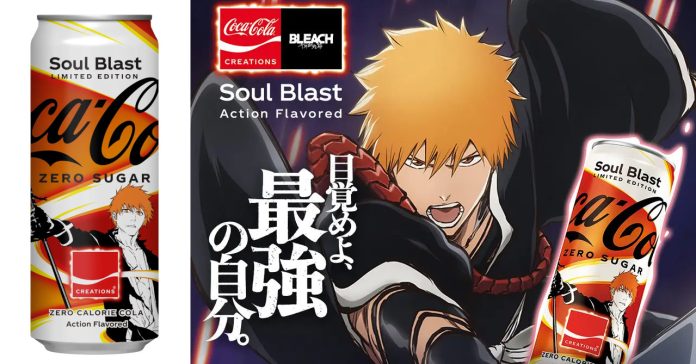 To further drum up hype for Thousand-Year Blood War, Coca-Cola teamed up with Bleach for a special “Soul Blast” limited edition flavor.

Along with the limited edition drink, the Coke and Bleach collab will also feature special promotional materials, as well as a cool merch collab with a Japanese streetwear brand. Of course, the highlight of the collab is the Soul Blast Zero Sugar drink. The can features a special design featuring Ichigo from the iconic anime series.

As for what it tastes like, this Bleach Coke is described as “Action Flavored” which, to be honest, we have no clue what will taste like. This is unlike Coca-Cola’s previous limited edition Marshmello drink which featured a watermelon and strawberry flavor.

Aside from the drink, the collab will also feature special promotional materials, as well as a cool Coke x Bleach-themed vending machine in Shinjuku. This vending machine is part of a wider collab with Japanese streetwear brand Atmos.

The Atmos partnership with Bleach and Coke also features a wide range of exclusive goodies, including t-shirts, key holders, acrylic stands, pins, stickers, and clear files. These will be available beginning today at the Bleach Coca-Cola pop-up in the Shinjuku Atmos store.

Why did Coke team up with Bleach you might be wondering? That’s because Bleach is returning this month with Thousand-Year Blood War, a new anime series that will cover the arc of the same name in the manga, and it will stream beginning next week.

Thanks to this, the Bleach anime will finally get a proper conclusion as the original anime’s run did not cover the entire manga’s story.

For now, there’s no word yet if this Bleach Coke flavor will be released outside Japan. Here’s hoping that it does. After all, the Marshmello edition Coke did get released hear in the Philippines back in August.