Doraemon Story of Seasons: Friends of the Great Kingdom gets a new trailer and DLC reveal at Thailand Game Show 2022

The trailer for the next Doraemon Story of Seasons game highlights the game's villager interactions. 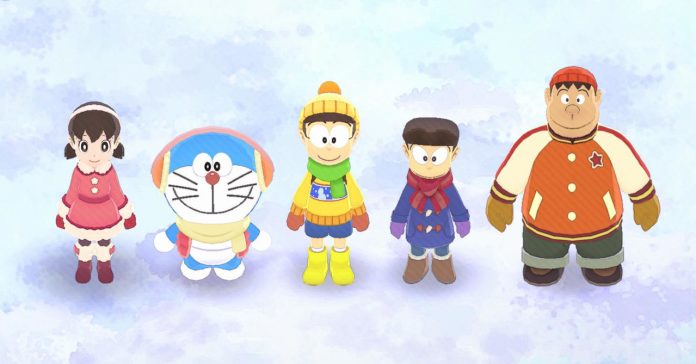 At Thailand Game Show 2022, Bandai Namco revealed the first DLC and released a new trailer for Doraemon Story of Seasons: Friends of the Great Kingdom.

With the game set to launch this November, players will be able to enjoy a chill farming life with Doraemon and friends. Though as revealed in the new trailer, players won’t be busy with just farming as interacting with other villagers will be a key part of the experience.

Check out the new trailer for the game which highlights socialization features here:

As shown in the trailer, players can interact with villagers and develop friendships with them. If you want to deepen your bond with them, giving gifts is highly recommended. Though you’ll have to take note of their personalities as not all villagers will like the same type of gift.

Along with the new trailer, Bandai Namco also showed off the first DLC pack for the game that’s entitled Winter Life.

As its name implies, Winter Life is snow-themed DLC that adds costumes for Noby and friends along with special furniture that are themed around winter. Plus, the DLC also features a playable mini scenario along with a new secret gadget.

The first Doraemon Story of Seasons DLC will be released on November 2 — the same day as the game’s release. It will be available as a standalone purchase or as part of the game’s Deluxe Edition which is available for pre-order now.

In case you’re unfamiliar, Friends of the Great Kingdom is the latest entry in the Doraemon Story of Seasons — a crossover game series between two iconic Japanese franchises. The game features Noby, Doraemon, and company as they arrive on a strange planet. They decide to live together in a farm with the young boy named Lumis in the planet to help him bring back the farm to its former glory.

Gameplay-wise, this is pretty much a Story of Seasons game at its core as it allows players to enjoy a relaxing yet involving farming simulator. Though there are features that are straight out of Doraemon, including the various secret gadgets that help with collecting goodies and for farming. Plus, the game also has a world that’s much bigger than the previous Doraemon game.

Doraemon Story of Seasons: Friends of the Great Kingdom is set to release on the PS5, Nintendo Switch, and PC via Steam on November 2, 2022. The game will be available in English, Thai, and Indonesian.