Finding the Flowzone is the second and last expansion for OlliOlli World. 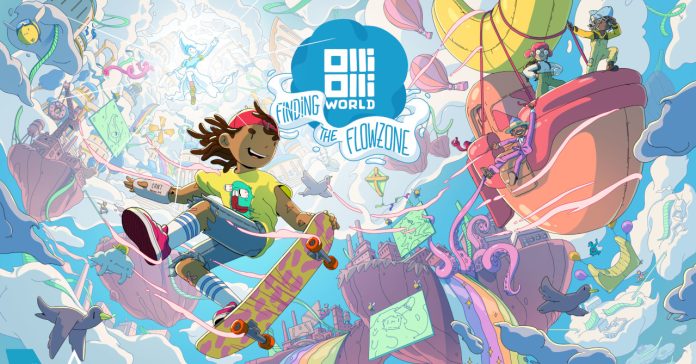 Following the release of Void Riders back in June, Private Division and Roll7 recently announced Finding the Flowzone, the second and last expansion to OlliOlli World.

This upcoming DLC will introduce a range of new challenges, as well as new levels. Though the highlight of this DLC are Windzones which allow players to catch serious air by having these gusts of wind propel you upwards. The DLC will also add new story content, and a boatload of other content.

AUDIO ON! Shanty on over to get the deets on OlliOlli World’s final expansion, Finding the Flowzone. Available November 2nd. 🛹🍌👀 pic.twitter.com/UcVdkiYhxs

To give you a better idea of what to expect in the Flowzone, the DLC is described as:

Get ready to embark on the raddest quest in OlliOlli World’s final ascending adventure: Finding the Flowzone. Join the fearless Radmospheric Three – Squid, Licht, and Professor Planks – unified to prevent B.B. Hopper, the business frog, from exploiting the rumored hidden city in the sky. As you traverse these incredible heights, collect map pieces to unlock the path to the legendary lost island built by the skate gods themselves. Courtesy of the tempest skate god, Gail Force, ride the new Windzones to perform the gnarliest aerial tricks.

Finding the Flowzone will be released on November 2, 2022 for PS5, PS4, Xbox Series X|S, Xbox One, Switch, and PC via Steam. In the Philippines, the DLC will be priced at PHP 480 on Steam. Take note that you’ll need a copy of the base game to play this DLC.

This DLC is also available for players who purchased the OlliOlli World Rad Edition, a deluxe version of the game that’s available for PHP 1,649. Specifically, this edition includes the base game, the previously released Void Rider expansion, this new DLC, and the “Close Encounter Skate Deck” digital cosmetic item.