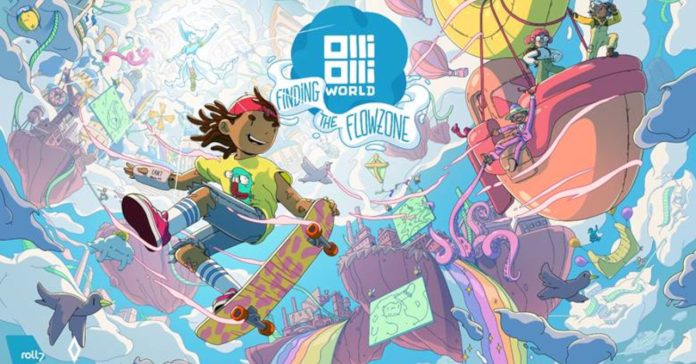 After its reveal a couple of weeks ago, Private Division and Roll7 have finally released OlliOlli World: Finding the Flowzone.

In case you missed its reveal, this is the second major DLC for OlliOlli World, the skateboarding platformer game by Roll7. As you may have expected, this new DLC adds lots of new content, including new levels, story content, and more.

Here’s the launch trailer so you can get a better idea of what to expect:

Meanwhile, its premise is described as:

Get ready to embark on the raddest quest in OlliOlli World’s final ascending adventure: Finding the Flowzone. Join the fearless Radmospheric Three – Squid, Licht, and Professor Planks – unified to prevent B.B. Hopper, the business frog, from exploiting the rumored hidden city in the sky. As you traverse these incredible heights, collect map pieces to unlock the path to the legendary lost island built by the skate gods themselves. Courtesy of the tempest skate god, Gail Force, ride the new Windzones to perform the gnarliest aerial tricks.

Finding the Flowzone is available now for PS5, PS4, Xbox Series X|S, Xbox One, Switch, and PC via Steam. In the Philippines, the DLC has an SRP of PHP 480 on Steam. Though if you have the OlliOlli World Rad Edition, this DLC is part of your version.

As it’s a DLC, you’ll need a copy of the base game to play it.

- Advertisement -
Previous article
This 3D Yu-Gi-Oh! duel is what Seto Kaiba’s been dreaming of
Next article
realme to launch the realme 10 in the Philippines on November 9