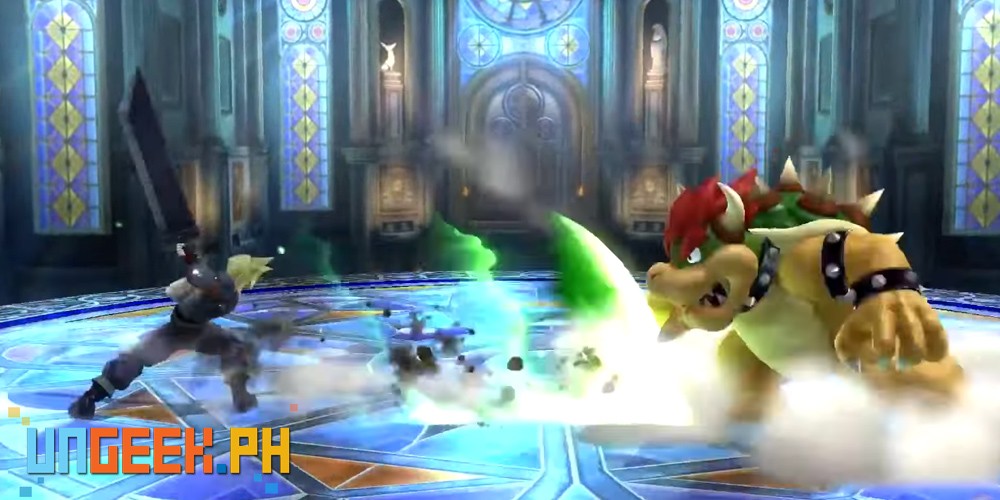 If you haven’t seen the trailer for the upcoming new character for Nintendo 3DS and WiiU’s Super Smash Brothers, you better WATCH IT NOW!

Okay, you saw, it? I’ll let you guys breathe a little. Okay, we good? Good.

Here are 5 reasons why the people from Ungeek have been non-stop geeking about this news since we first saw it this morning.

Let me repeat that. CLOUD STRIFE will be in Super Smash Brothers! Gyaaah! Not only is one of the most (if not the most) iconic character in Final Fantasy history guesting on a different game, he’s guesting on a different platform. This is pretty unprecedented as this could ushers in more characters from Final Fantasy roster into this all-star brawler game!  A certain one-winged angel perhaps (cue music: Estuans interius, Ira vehementi…)?

Years after Final Fantasy VII’s release on the first PlayStation system, the game’s popularity still hasn’t waned. Several Final Fantasy’s have passed and people are still clamoring for a continuation or at least a remake of the beloved game using more modern tech. In 2005, avid fans of Final Fantasy VII will get that wish — although in a form of a full length feature called Final Fantasy VII: Advent Children.

In it, Cloud and the rest of the gang face lingering threads of Jenova and in turn, a version or so of Sephiroth. Taking place two years after the events of FF7, Cloud sports a darker get-up. It seems, he carried that look with him here in Super Smash Brothers as well.

Having a new character in Super Smash Brothers means having a stage of your own and what better stage to put Cloud in than the famed and iconic Mako reactor in Midgar built by the beautiful people of Shinra Electric Power Company. I’m guessing (and hoping) that they use the classic midi soundtracks as well. Retro is the new cool, people.

More than settings and aesthetics, it’s really these amazing limit break moves that got us all excited. The video showed a couple of iconic limit break moves from Cloud including (but not limited to): Braver, Climhazzard, Blade Beam and, of course, Omnislash.

I honestly thought that Cloud’s moves will be limited to his Limit Break arsenals, thankfully I’m wrong. Enter: Summons. I mean,  it wouldn’t be Final Fantasy if it didn’t include a bit of magic and summoning, right? :p So far we saw Ramuh, Ifrit, Leviathan, Odin and of course, Bahamut.

I’ll be ending the article here for now before I totally lose my sanity over this. CANNOT. DEAL. GUYS. T__T

What about you, peeps, what are you excited about Cloud’s Super Smash Brothers debut?