MEDIOCRE MONSTER makes a Huge Splash in the Gaming Scene 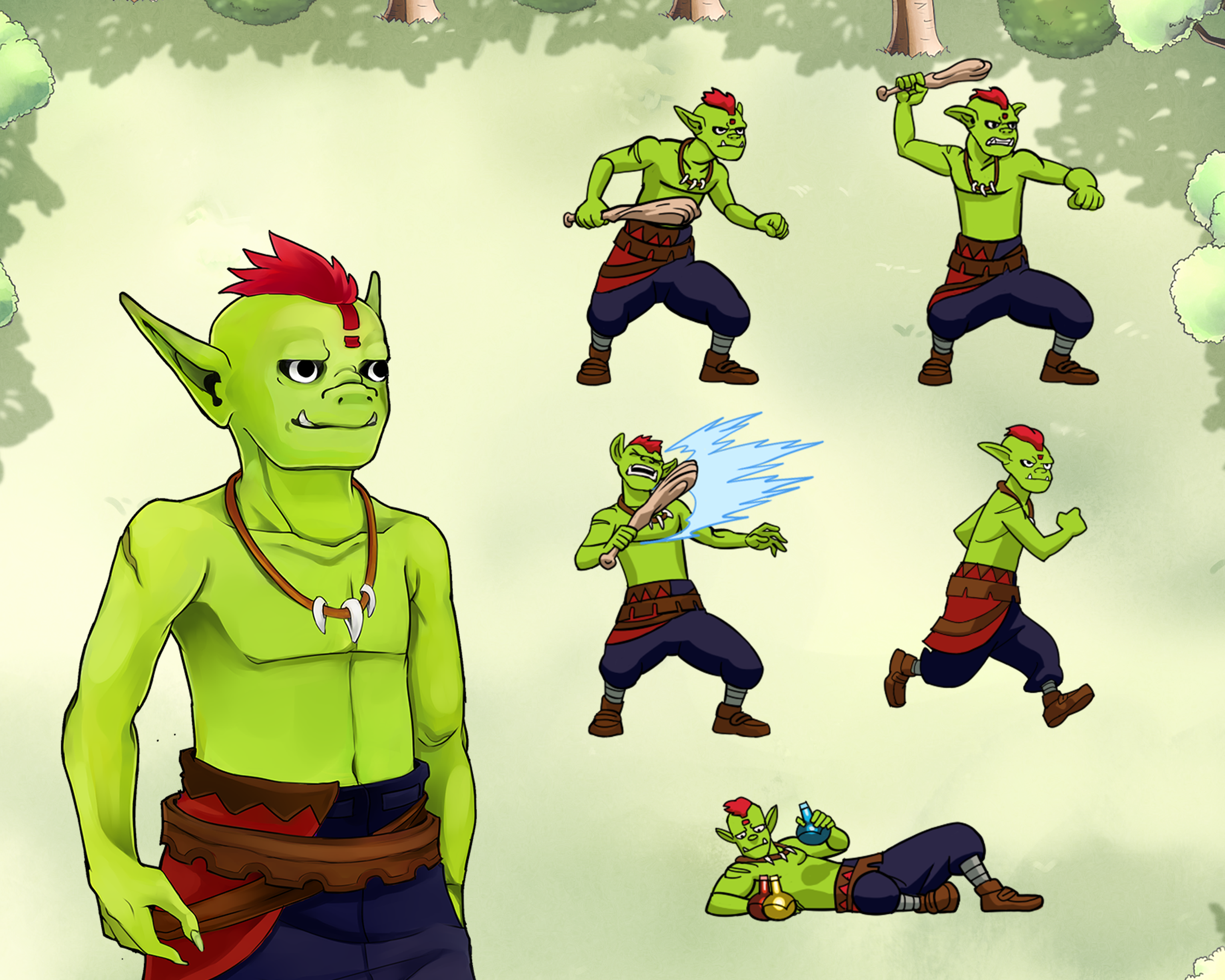 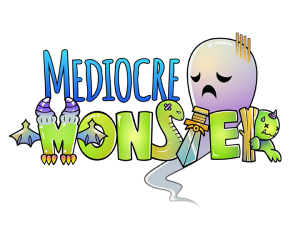 Role Playing Games have always been my favorite kind of games. I’m a big fan of story-based games (as you can see on our YouTube Channel) and have always been hooked on the story and experiences that RPGs have to offer. If you’ve played a lot of these games, you’d be familiar with battling random monsters as you grind of XP and cash. Mediocre Monster turns that on its head and gives you an unusual RPG experience by letting you play the role of – you guessed it – a mediocre monster… and the concept is simply AWESOME. 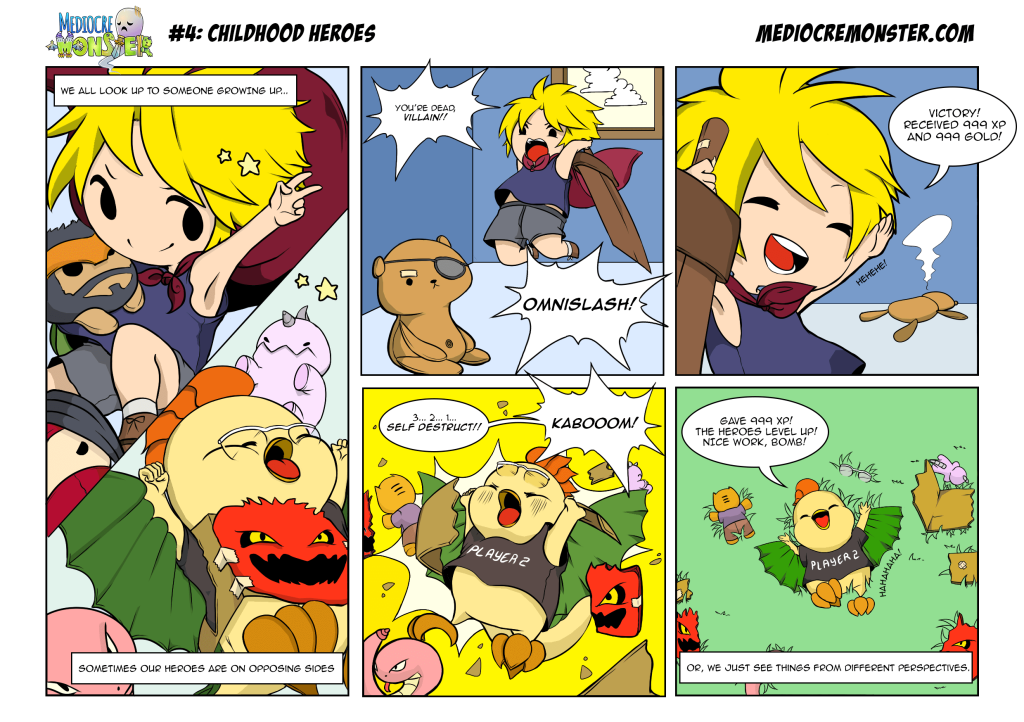 Mediocre Monster is game by Opal Squad, a three-person team from the Philippines, that made waves in the Square-Enix Collective around Q3 last year. It’s a game that shows you the flip side of the the usual RPGs that we’re familiar with. Now, we play the role of Gob. Is he a knight? Maybe a barbarian? Maybe a mage? NOPE. He’s a Goblin and he’s a random encounter monster. Also, he may be a monster but he ain’t bad. He’s merely doing his job of HELPING the heroes out.

Okay… so why is Gob doing this? Well, as an employee of “The Bestiary”, the worldwide leader in random monster outsourcing, this is part of the job. They basically go “attack” heroes and, after getting beat up a bit, pretend to fall and give them potions etc. The job isn’t a cakewalk either. Gob puts in a lot of practice on how to give a good show to the heroes – from how to take a hit to what to do during specific status ailments.

There’s more to Gob than just his job. As with any good game, our unlikely hero, Gob, has a story behind his character. Gob actually lives in a town called “The Grind”. Long story short, the town has fallen on some hard times. What used to be a thriving place for outsourced monsters has become somewhat of a ghost town because of some economic issues. On top of that, the Mayor seems to have tapped into the town coffers to fund his Free-mium Game Addiction and buy virtual gems. (LOL) Now, the town’s in danger of being re-purposed into a City Builder Location and the Mayor turns to “The Bestiary” for help. This is where Gob comes in. It’s up to you to make “The Bestiary” and “The Grind” great once again by becoming the BEST RANDOM MONSTER EVAR! 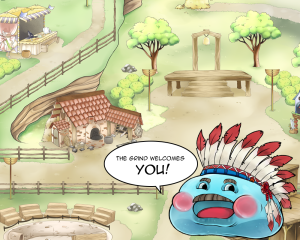 Personally, it’s in the premise and concept where the genius of this game can be found. We’ve seen things like WRECK-IT RALPH and UNDERTALE that take sneak peek at how the OTHER SIDE of games are. What about the bad guys? What if they’re good? What if the heroes were actually the REAL bad guys? Mediocre Monster follows this train of thought and takes it own level of depth.

The game takes on a humorous angle on things but it DOES lead to some interesting game mechanics. First, you have your JRPG style of battle but, now, you have to “put on a show”. You need to remember the rules correctly such as what to do when you’re charmed and that you need to attack the character who taunted you and no one else. Do your job well enough and you just may be rewarded with awesome stuff such as a COLOR PALETTE CHANGE!

The game doesn’t stop there through. The game also comes with a whole town-building mechanic. Since you’re trying to grow “The Grind”, you’ll have the option of bringing in various monsters into your city as well as build structures. These actions and decisions will affect the town and the Random Monster Outsourcing industry in various ways which will also allow Gob some opportunities and activities that will help him on with his job and his quest to restore “The Grind”. 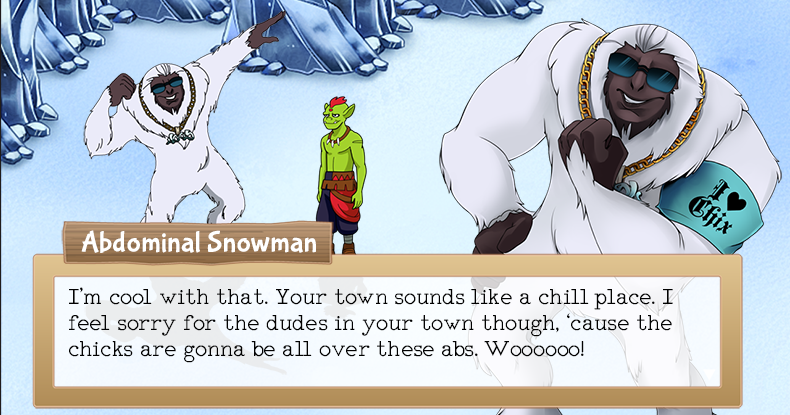 In my opinion, this game is DEFINITELY worth supporting and looking forward to. Aside from the great concept and mechanics of the game, I like how Opal Squad is actually really putting in the time and effort to make sure that they release a Quality Game. I had the pleasure of meeting the developers and I was able to hear first-hand how much passion and time they’re putting into the game. According to them, they derive their inspiration from things like Undertale, Harvest Moon, Chrono Trigger, Wreck-It Ralph, and One Punch Man. They want to be able to deliver a game that puts out the same level of excellence and quality as those did. And with what we’ve seen so far? They’re definitely on the right track.

Right now, they have put MEDIOCRE MONSTER on KICKSTARTER until March 24. Be sure to check it out and, if you like it, I encourage you to back the project as well. On my end, I can’t wait for this to come out and give it a playthrough! If you want to find out more about the game, check out the links below. As always, stay tuned here in UnGeek for any further gaming news. Till next time, guys! Keep on Gaming!